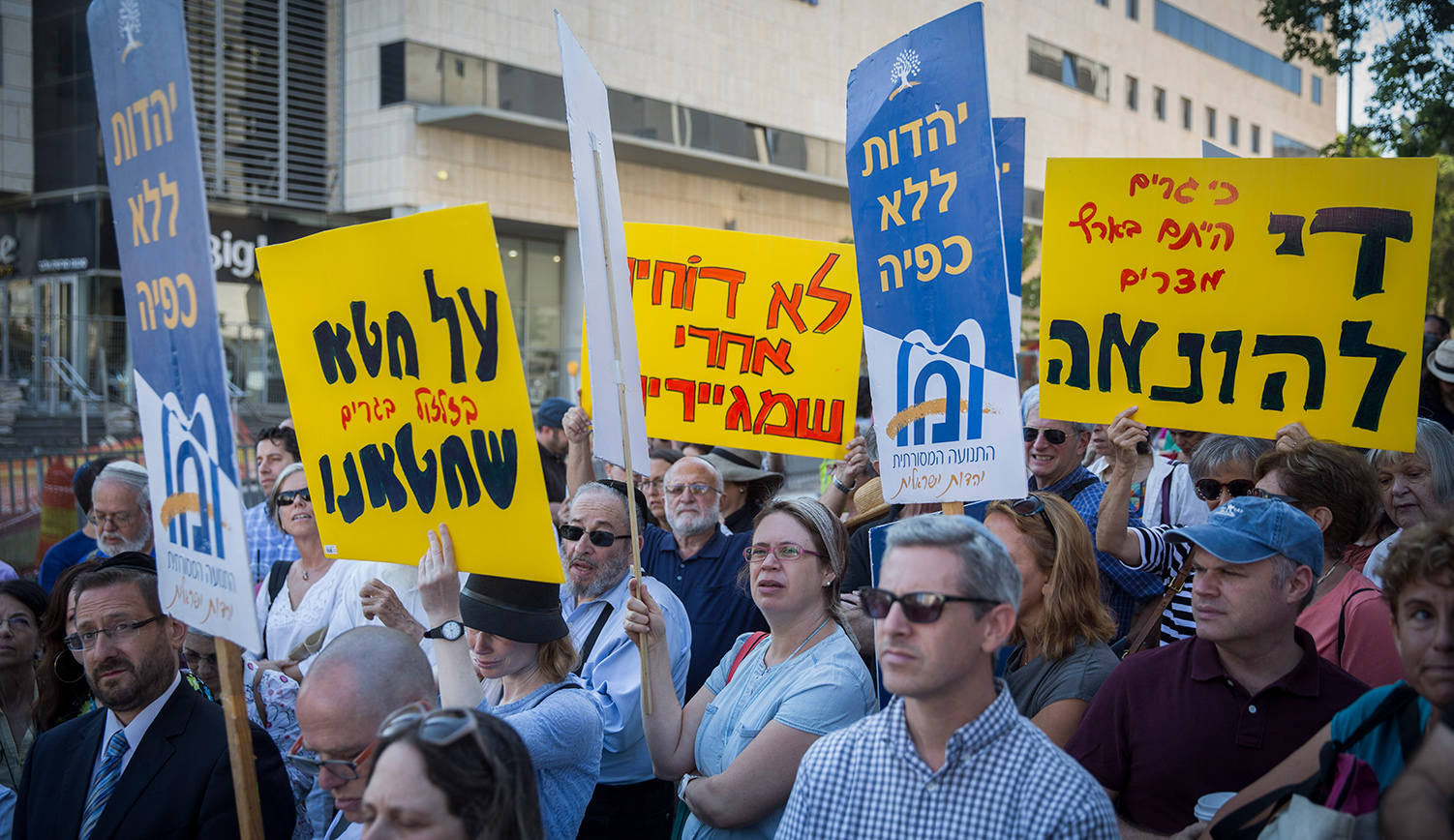 Protesters outside the Chief Rabbinate’s offices in Jerusalem in 2016. Hadas Parush/Flash90.

As an American Jew growing up in the 1970s and 1980s, the plight of Soviet Jewry, the Prisoners of Zion, and the refuseniks were central to my experience. Pictures of Natan Sharansky decorated the walls of my Jewish day school, our synagogue reserved pews for Jewish activists denied the right to practice their religion and to emigrate, and an empty chair was placed at our Passover seder to symbolically welcome the presence of imprisoned Soviet Jews into our homes. We marched every year with tens of thousands of protestors at the Solidarity Sunday rallies in New York City, and in 1987 we joined over 250,000 participants in the Freedom March in Washington.

Later, studying and then permanently living in Israel, I volunteered at absorption centers for Russian and Ethiopian newcomers. I saw firsthand how, while absorbing over a million immigrants from the former Soviet Union, Israel’s cities and politics were remade.

Matti Friedman’s essay captures the cultural aspects of the Russian aliyah of the 1990s. (He notes that while only a third of the immigrants actually came from Russia, “in Israel all became known as ‘Russians,’” and thus he, and I, use the term Russians to refer to all immigrants from the former Soviet Union.) However, while Friedman explores three decades of social integration, he does not relate to another central question posed by the Russian aliyah: their religious integration into Israel’s Jewish life.

In the former Soviet Union, religion was not simply discouraged, but actively repressed. Although some brave refuseniks learned Hebrew and returned to religious observance while still in Russia, most of the Russians who arrived in Israel were completely secular. They were not acquainted with the nuances of religious observance and identity in the Jewish State. Israel, the Russians would find, is an increasingly traditional society, and over time, strictly secular Israelis have become a significant, yet small (and shrinking) minority. The Russian immigrants’ secularism triggered some to respond with antagonism, and at times, even hostility.

However, over the past 30 years, most Russian immigrants have adopted the mix of religious and secular practices that typify Israel’s citizens. Friedman himself notes:

The Russians have moved to adopt the traditions of the Israeli mainstream. According to polls conducted by Shmuel Rosner and Camille Fuchs for their 2019 book Israeli Judaism, fully 80 percent of post-Soviet immigrants reported having some kind of Passover seder, and 53 percent said they fasted on Yom Kippur (as opposed to 97 percent and 67 percent, respectively, of the general Jewish population). When asked if Israel should be a Jewish state, no less than 90 percent said yes—the same as the percentage among all Israeli Jews.

At the same time, no matter what Jewish practices they observe, a significant percentage of Russian immigrants are not Jewish according to Orthodox religious law (halakhah), which defines a Jew as one who was born to a Jewish mother, or who underwent a conversion accepted by the rabbinate. How did these people immigrate to Israel in the first place? To understand that, we need to identify the differences between Israeli civil law and Jewish religious law.

To begin with the former, the Israeli Law of Return grants citizenship to both those considered to be Jewish, either by birth or conversion, and to those with at least one Jewish grandparent. Therefore, alongside those considered Jewish by religious law, many children of Jewish fathers or people with only one Jewish grandparent moved to Israel as well. Furthermore, a number of Russians who never self-identified as Jewish, and are not even descendants of Jews, immigrated to Israel in order to escape the hardships of the former Soviet Union.

By now there are close to 400,000 Israeli citizens who self-identify as Jewish, but are considered to be “without religion” by the Ministry of the Interior because they cannot prove their maternal Jewish roots, and therefore cannot be considered to be Jewish according Jewish law.

The consequences of having such a large number of Israelis “without religion” are enormous. At the national level, intermarriage, once an exclusively Diaspora phenomenon, is common. Such marriages do not entail assimilation into a non-Jewish majority culture, as often happens in the Diaspora, but rather Jews marrying non-halakhic Jews whose sensibilities are, in many cases, fully formed by the majority Jewish culture in Israel. Even so, this type of intermarriage is, at times, the source of bitter family conflict.

In time, some fear that this phenomenon may undermine national and social solidarity, which is so central to the Israeli experience and its national survival, and may even lead to the formation of “two nations”—one descended from mothers considered Jewish by religious law, and the other descended from Israeli mothers “without religion”—who cannot marry one another.

At a personal level, many of these immigrants who are considered to be “without religion” came to Israel in order to escape persecution and anti-Semitism. Their children and grandchildren feel to be and identify themselves as Israelis, but they are often treated as outsiders in the Jewish state. Religious, traditional (m’sorati), and even many secular Israelis do not view them as Jewish, and some even harbor xenophobic and racist sentiments towards them. This aspect of the Russian immigrants’ experience is not sufficiently discussed; their plight receives too little attention in the media, and the broader Israeli public and their representatives are apathetic.

The Law of Return is a case in which Israeli civil law is different from Jewish religious law. However, in other legal domains, Israel does not have a full separation of religion and state. Matters relating to marriage and divorce of Jewish citizens are, by law, entrusted exclusively to the rabbinic courts. This law, formally adopted in 1953, is simply a continuation of the Ottoman laws regarding marriage and divorce, and because of it, there is no civil marriage in Israel. A person who cannot or does not wish to be married according to Jewish law, by the rabbinate, cannot be married in Israel. A common workaround for the thousands of Israelis who do not want to be, or cannot be, married by the religious courts is to travel abroad, usually to Cyprus, where they are married by civil magistrate, after which they register with the Israeli authorities upon their return.

Prior to this wave of Russian immigrants, a person registered as a Jew could be married by the rabbinate without an extensive and invasive verification of their Jewish ancestry. However, in the wake of the Russian aliyah, the rabbinic courts began to demand that anyone who emigrated from the former Soviet Union after 1990 must submit to a “b’rur yahadut,” (verification of Jewishness). These procedures were adapted, and made stricter, over the past twenty years. In recent years, some courts have even insisted that Russian immigrants take genetic tests to confirm their Jewishness.

In some circumstances if the rabbinic court suspects that a person is not Jewish, they will not only mark the person as “ineligible to be married,” they may also retroactively remove the Jewish status of parents, siblings, and other relatives, causing great anguish to the entire extended family.

Those who are unable to provide the necessary evidence must either pursue a more intense investigation of their Jewish lineage, or give up any hope of being married in Israel. Furthermore, according to Jewish tradition, Jews and non-Jews may not be buried next to each other, and so Israelis who are not halakhically recognized as Jews may not be buried next to their spouses—even if their civil marriage had been registered—or next to their other relatives. Even non-halakhically Jewish soldiers who fell while defending the Jewish people and the Jewish state are buried in separate, specially designated areas of the cemetery.

Of course, those who are not Jewish, or those who are unable to prove their Jewish matrilineal ancestry, may choose to undergo a religious conversion in recognized “Special Conversion Courts.” Conversion candidates are interviewed, and are usually required to participate in a study program offered by Nativ, the National Center for Jewish Studies, Identity, and Conversion, or other recognized conversion programs. Candidates are expected to adopt a religious lifestyle, belong to a religious community, and commit to observe Torah and Jewish law. They then appear before a religious court of three judges who will decide whether to continue the conversion process. For males, this process includes circumcision, and for both men and women, immersion in a mikveh in the presence of three judges.

There are many kind, committed and professional teachers and judges in the national conversion programs and courts. Even so, many candidates do not meet the minimal requirements for a halakhic conversion. Furthermore, unfortunately quite a few of the rabbinic judges have rejected the more lenient conversion standards espoused by former chief rabbis, including Rabbis Ben-Zion Meir Ḥai Uziel, Isser Yehuda Unterman, Isaac Herzog, Shlomo Goren, Ovadia Yosef, and Eliyahu Bakshi-Doron. The majority of those who register do not successfully complete the program.

Some in Israel have minimized this crisis of Israeli religious identity, asserting that according to the Central Bureau of Statistics, the percentage of Israelis, especially children, who are “without religion” decreases each year. However, personal and religious ramifications remain. Furthermore, this situation has led to an increase in “illegal” and “unrecognized” weddings that are performed without officially sanctioned rabbinic supervision. In addition, frustrated by the inefficiency of the rabbinic courts, former rabbinic court judges, such as Rabbis Yisrael Rosen and Gideon Perl, and prominent Orthodox rabbis, including Naḥum Rabinovitch, R’em HaKohem, Haim Amsalem, David Stav, and Shlomo Riskin, have formed their own conversion courts that are not officially authorized by the rabbinate.

What does the future hold? Will this issue one day concern the broader Israeli population and their political representatives? Will it impact the public’s acceptance of the Chief Rabbinate? Will it affect national unity and resilience? Will the rabbinic establishment offer the halakhic tools and solutions necessary to deal with this issue, either on a case-by-case, or even national basis? Only time will tell if the immigrants Friedman describes will change Israel’s religious life as much as they have changed its culture, and whether the religious authorities in the Jewish state will find a way to fully integrate Israel’s Russians.