In the effort to enforce its political principles, France is weakening them. 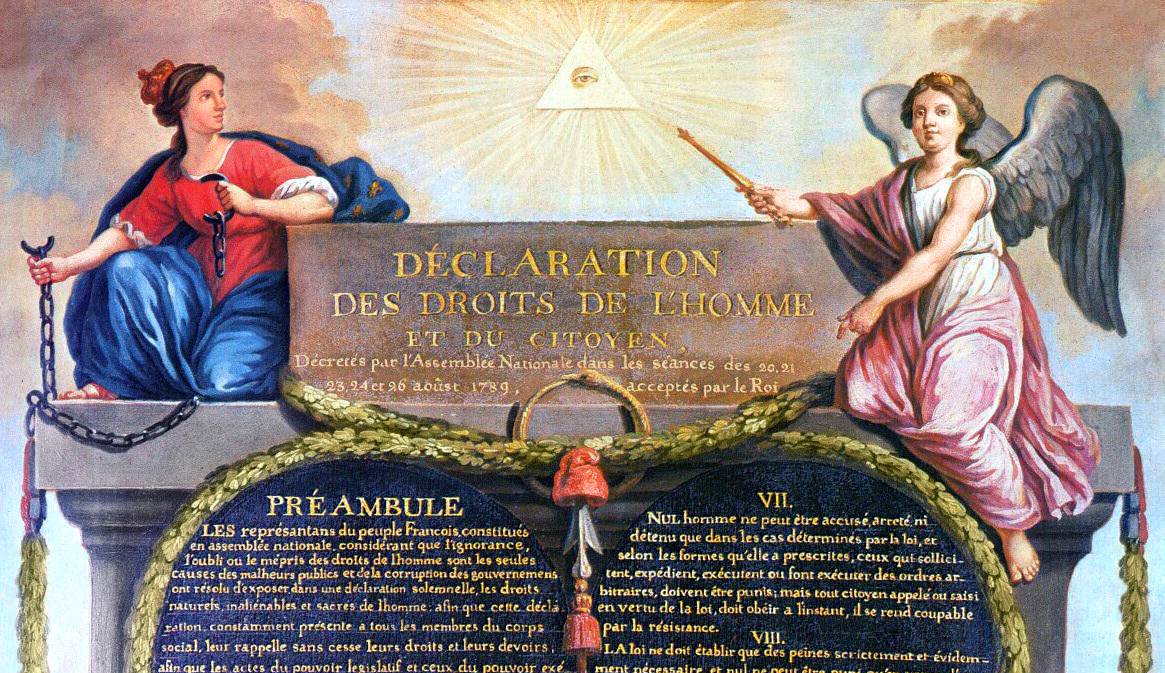 From the Declaration of the Rights of Man and of the Citizen, 1789. Wikipedia.


Alain El-Mouchan is the pen name of a professor of history and geography in Paris.

Sincere thanks to Ruth Wisse, Joshua Muravchik, and Michel Gurfinkiel for their thoughtful responses to my reflections on the twilight of French Jewry. Together, they raise a number of issues that deserve further clarification.

Both Joshua Muravchik and Michel Gurfinkiel chide me for, in their view, an overly optimistic description of the social and political comfort enjoyed by Jews in France in the long era between the 1789 French Revolution and the beginning of the present century. Everything they say is of course pertinent. My point, however, was not to indulge in historical reconstruction but, sticking to the realm of ideas, to investigate how the Jewish issue brings the French Republic face to face with its own deepest political principles, if not its reason for being.

In the realm of historical facts, we can all agree that the level of anti-Semitism in France has matched that in other West European states. In this sense, indeed, France has never been a “paradise” (my word) for Jews. During World War II, Muravchik reminds us, “one-quarter of the Jews living in France were murdered in the Holocaust, with French connivance.” Nevertheless, it is also a fact that three-quarters of French Jews survived the war, and they did so thanks to the numerous Frenchmen who challenged Nazi and Vichy laws. As real as was French “connivance” with the Nazi occupier, it has to be placed next to the far higher degree of complicity displayed by many other European countries during the war.

But, to repeat, I was speaking less about facts than about principles, and here an intellectual problem arises. France developed a republican model of governance that Anglo-Saxon liberals still have a hard time either understanding or accepting as a legitimate and authentic way of implementing the political ideals of the Enlightenment. Thus, Muravchik is right that “America is the place where the . . . values of the Enlightenment were first and most successfully put into practice,” but, as he himself admits, he is also being chauvinistic in his claim that the American version of those values—a version influenced most profoundly not by the European but by the English and Scottish Enlightenments—is also the “best.” I myself would argue that, from a philosophical point of view, republican values may well be the best.

True, no other country in the world has chosen to replicate the French model, although Belgium, which is not republican, may come the closest. (It’s no coincidence that the burqa is banned in both countries.) True, too, today it is the republican model that is most at risk, and most acutely where French Jews are concerned. Here, however, I would modify Ruth Wisse’s statement that “the rights [my emphasis] to life and liberty and the pursuit of happiness . . . are no longer available” to Jews in France. Those rights are indeed available; the issue, rather, is that the French political order and French society are less and less capable, despite their best efforts, to ensure for French Jews the possibility of enjoying those rights. The distinction is important, though I’m quite certain that Wisse and I are in basic agreement on the ominous significance of this development.

For his part, Michel Gurfinkiel, contesting my use of the word “paradise,” points out that in fact, “throughout the 19th and early 20th centuries, . . . France attracted comparatively few Jewish immigrants,” and he therefore suggests that the real question is “why did so many Jews avoid France”? The reason is simple: in the 19th century, there were more and greater economic opportunities in North America than in Europe (just as there still are today). This, however, has no bearing on the relative comfort level of those Jews who did make their way to France and who found there a society worthy of their admiration and loyalty. Such, I noted, was the admiration expressed by Emmanuel Levinas’ father who, even at the height of the Dreyfus Affair, marveled that “half a nation could be for a Jew,” something “unimaginable anywhere else in Europe.” As for the 20th century, the majority of North African Jews chose France over other countries in the 1950s and 60s both because they spoke French and because Algerian Jews in particular were already French citizens—and, crucially, because the republican model was then still a guarantor of peaceful coexistence among different communities.

What about today? Joshua Muravchik is confident that, despite the physical threat emanating from France’s Muslim population, it is technically possible to “make Jews feel safe in the streets and metros and in their cultural institutions.” As I was at pains to observe, that is exactly what is happening in France, thanks to the massive deployment of military and police forces to protect the French Jewish community—an effort, be it noted, that has been mounted at the expense of other missions and also at the expense of the republican model itself, according to which no category of citizens is supposed to require such special protection. And therein lies the heart of the paradox my essay was intended to illuminate: in order to enforce the republican model, French authorities cannot but weaken it still further.

Is France guilty, as Muravchik suggests, of lacking the “courage and self-confidence” to integrate its manifestly non-integrated Muslim population? The charge is founded on two contradictory premises. The first is that, unlike the liberal Anglo-Saxon model, the French republican model suffers from a unique disadvantage in the task of such integration. The second is that, nevertheless, any and all immigrant populations can be integrated into any Western system of democratic values, republican or otherwise. Both propositions are questionable if not wrong.

As to the first proposition, waves of East and South European immigrants were in fact absorbed with relatively little stress by France both before and after World War II. By contrast, British authorities today humbly acknowledge that the Anglo-Saxon liberal model has failed to integrate most Muslim immigrants to the UK. Some British specialists go as far as to stipulate that North African Muslims are better integrated in France than are Pakistani or Indian Muslims in the UK.

And this leads us to the second proposition, whose validity is usually said to be proved by the American experience. That proposition rests on an unwillingness to acknowledge a discomfiting cultural and religious reality: that Islam, by definition, denies and negates the principle of democratic self-government. If the time should come when recently arrived immigrants swell the American Muslim community to 10 percent of the country’s population, as they have done in France, and when these new immigrants refuse to allow Muslim women to be treated by male doctors or make much greater, non-negotiable demands of American society, as they do of French society, we shall see whether the Anglo-Saxon model is not equally at risk.

And what about America as the place where, Joshua Muravchik writes, “anti-Semitism is less present than in Europe, [and] where support for Israel remains overwhelming”? That happy circumstance may obtain now, but not necessarily forever. On this point Ruth Wisse is unfortunately correct in observing that America, too, is “becoming more vulnerable to the politics of blame that undermine democracies from within.” If “Death to the Jews” is not heard on American streets, it is amply to be encountered on the Internet. If, as she writes, “no horrors like the torture of the young Frenchman Ilan Halimi have yet occurred to suggest that America harbors pockets of Muslim youth as depraved” as those in France, one must wonder how many Boston Marathon-type bombings prepared by young Muslims have been thwarted by the FBI. If anti-Semitism doesn’t find an openly favorable echo in the mainstream press, it is, as Wisse herself has eloquently demonstrated, fully present and potent on major American campuses under the showy rags of anti-Zionism. As for appeasement of Islamist hatred of Jews and genocidal intentions toward Israel, who can deny that the U.S. has today taken on the role of appeaser-in-chief, openly supporting the only country in the world whose strategic aim is to destroy the Jewish state?

It does not take a doomsayer to notice that, thanks to the story of Jewish success in America, most Americans, Jewish and non-Jewish alike, are prone to amnesia concerning the history of their own country’s relationship to the Jews. They forget the era of open discrimination in business and the professions, in neighborhoods and clubs, in university admissions, in public accommodations, and especially in the area of immigration, not to mention America’s refusal to open its doors to Jews desperate to escape the Nazi horror. No sane person could wish any diminution of the blessings that are the lot of today’s American Jews, but what Wisse memorably refers to as “cracks in the foundation” are unmistakable.

That leaves Israel. While both France and the U.S. are built on universal models, Israel has been conceived from the start as a Jewish state for the Jewish people. Notwithstanding Ruth Wisse’s fond surmise, Israel does not, or not yet, offer its French Jewish immigrants an “improved quality of life and a potentially higher standard of living.” It cannot even offer greater security, considering that at present it is both a state at war and a society under daily terrorist attack. What it does emphatically offer is the possibility of experiencing self-fulfillment as a Jew in an environment designed for Jews.

Since World War II and the Jewish immigration from North Africa, most if not all French Jews, as Michel Gurfinkiel writes, have silently renounced their former status as “French Israelites”—a form of ethnic self-subordination that led them meekly to accept the imposition of restrictive laws in 1940 and transport to the death camps soon after. Today, as I tried to make clear in my essay, they have a deeper and truer understanding of their situation as Jews who happen to live in a country called France and to hold a French passport—and who have a place to go to when they wish to live as Jews, period.

How the Jewish Issue Brings France Up Against Its Own Reason for Being
1. Essay