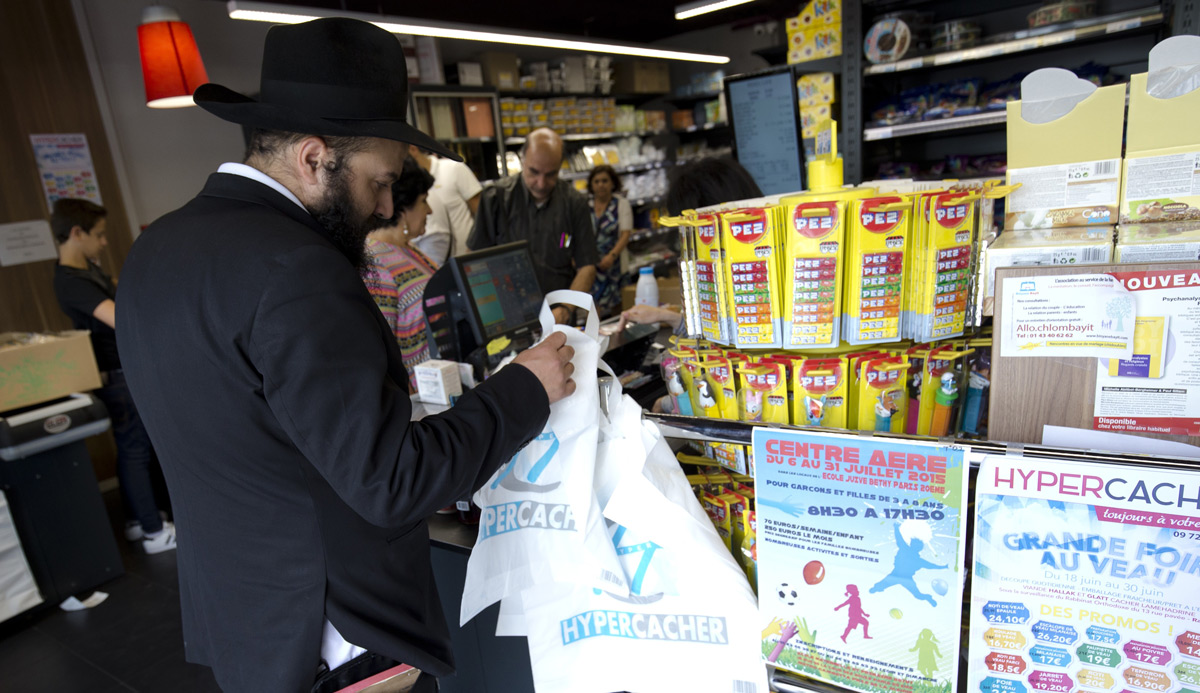 A man waits in line at a Hypercacher kosher supermarket in Paris on June 26, 2015, six months after the jihadist attack in January. Kenzo Tribouillard/AFP/Getty Images.

By coincidence, on the same day “The Twilight of French Jewry, the Twilight of France” was published in Mosaic, I came upon some highly pertinent remarks by Christine Angot in Le Monde’s weekly literary supplement. Angot, a staunch liberal now in her mid-fifties, is a prize-winning playwright and novelist whose plotlines are largely drawn from her own life as the product of a dysfunctional family. (The French term for this is autofiction.) The subject of her remarks was a television program in which she had participated for Arte, the quality French-German channel, about Chateauroux, the town in central France where she was brought up.

Some Americans may remember Chateauroux as the locale of a U.S. army base in the 1950s and early 60s. Until recently, it could be described as quintessentially “deep France”: a sleepy local capital, surrounded by dark woods and rivers. Things are changing, however, as Angot realized with a start on her filmed visit there. Muslim immigrants are taking over many parts of the town, including her former neighborhood of public housing, and turning them into semi-independent enclaves, what the French police refer to as “no-go zones.” As she put it in Le Monde:

When we arrived—all of us, the TV crew complete with their cameras and sound booms, and the writer who grew up there—we had to account for ourselves, to show our identity cards, to prove who we were, to state exactly where I had lived. . . . And then, the director’s first name—David, his full name being David Teboul—supplied material for unsavory jokes…. Some of the locals tried to intimidate us, saying that television was a cartel of the Jews… All this was uttered in a very menacing tone.… We shot a few scenes under a running fire of jibes and jeering, and as we left we were told to pay our compliments to the Talmud…. I swear we felt most uncomfortable.

Such a vignette, from such a witness, highlights and amply confirms what Alain El-Mouchan writes in Mosaic about the prevalence of open anti-Semitism among French Muslims, and about the current erosion of France itself as a nation and a state.

My only reservation about El-Mouchan’s essay concerns his suggestion that for a long time, ever since the Revolution of 1789, France had been a “paradise” for Jews: indeed, that “even before the United States, and centuries before the existence of Israel, enlightened France was the place for Jews to be.” He is not alone in this opinion—many French politicians and intellectuals, and many French Jews, say similar things—but it is exaggerated and misleading.

In the course of the 1789 Revolution, France did indeed formally grant full civic equality to its Jews (as to all of its inhabitants)—the second modern nation, after the United States, to do so. And yet throughout the 19th and early 20th centuries, contrary to what El-Mouchan seems to imply, France attracted comparatively few Jewish immigrants. When given a choice, Jews from Eastern Europe or the Middle East would usually go elsewhere. True, in the century or so between 1800 and 1914, the French Jewish population tripled: from 40,000 to 120,000, mostly thanks to immigration. True again, many Jewish immigrants or their children did well in France, from the Frankfurt-born Baron James de Rothschild, who became the richest man in the country (and possibly in the world), to intellectuals like the philosopher Henri Bergson and artists like Marc Chagall and almost the whole Montparnasse school of painters. But in the latter part alone of the same period, Great Britain’s Jewish population quintupled (from about 50,000 in the 1880’s to 250,000 in 1919). And this is not to mention the 2.6 million Jews taken in by the United States between 1881 and 1939, or the additional half-million who made their way to Latin America, Canada, and South Africa.

The better question might therefore be: why did so many Jews avoid France? In my opinion, they understood that France was in fact ambivalent when it came to the Jews: neither viciously anti-Semitic nor overly friendly. And this, too, goes back to the Revolution. The Count of Clermont-Tonnerre, the chief proponent of Jewish emancipation in 1790, famously declared that Jews should be accorded citizenship “as individuals” and not “as a people”—meaning that they would be required to “surrender” (El-Mouchan’s accurate word) much of their traditional way of life, something many accepted but many others saw as a form of mild apostasy.

Even so, the French did not hurry to confer full equality on their Gallicized “Israelites,” as they were called. Under the Terror, some Revolutionaries earnestly advocated “the regeneration of Jews by the guillotine”—genocide, in short. Later, even as Napoleon would recognize Judaism as an official religion along with Catholicism and Protestantism, he did not trouble to provide government subsidies for rabbis or cantors as for Christian priests and pastors: a situation that lasted until 1843. Legal restrictions against Jews were not deemed unconstitutional until 1848, almost sixty years after the Emancipation, and only as the result of lengthy proceedings. Even under Emperor Napoleon III, who was sympathetic to Jews and allocated public funds for the building of sumptuous synagogues in Paris, the Great Synagogue that was originally slated to stand on Rue Lafayette, near the Opéra, was instead shifted to a spot a block away on Rue de la Victoire, out of sight.

Within such a context, the Dreyfus affair in the 1890s did not come as a complete shock to Jews either in France or abroad. Nor were they taken altogether by surprise in 1940 when the Vichy regime of Marshal Philippe Pétain, admittedly in a moment of defeat and national chaos, turned French Jews into pariahs and foreign Jewish residents into non-persons; or again in 1967 when General Charles de Gaulle, the former head of the Free French and leader of the anti-Pétain and anti-Nazi Resistance, founder and president of the Fifth French Republic, indulged in an unbridled anti-Israel and anti-Jewish diatribe during a press conference

Yet, in the second half of the 20th century, the French Jewish community was also transformed into the largest and the most vibrant in Europe. This was mainly thanks to the sudden influx, starting in the mid-50s, of hundreds of thousands of French or French-speaking Jewish refugees from North Africa, Turkey, and Egypt. By 1962, enough had arrived to swell the community past the half-million mark, allowing in turn for a genuine cultural and religious revival.

In political terms, moreover, the French Jewish community had undergone an even more significant transformation during World War II and especially in its aftermath with the birth of the state of Israel. In the face of the Holocaust, and of Vichy’s collaboration with the Nazis, French Jews resolved to withdraw, as it were, from their old implicit contract with the state and to reclaim their full identity as a people. Overnight, the word “Israélite” was dropped from Jewish parlance, and “Juif” was reinstated. Overnight, many French Jews felt free to revert to their suppressed religious way of life—and openly to support the new state of Israel. All of this was of course strongly reinforced by the subsequent arrival of the North African Jews, many of whom, as El-Mouchan writes, “never fully embraced the terms of the Franco-Jewish Enlightenment” in the first place.

Which brings me to what I believe is the true motivation of those growing numbers of French Jews who are currently emigrating to Israel or America or elsewhere. El-Mouchan insists, rightly, that they are not simply fleeing out of fear, whatever real physical dangers they may be exposed to. But neither, in my view, do they lament the passing of a French “republican model” that they never fully trusted. They simply cannot abide becoming “Israélites” again, trading their identity and authenticity for an illusory tranquility.