Smaller and internally more homogeneous political units may offer a brighter prospect for stability in the region than the forcible unification of decomposed Arab states. 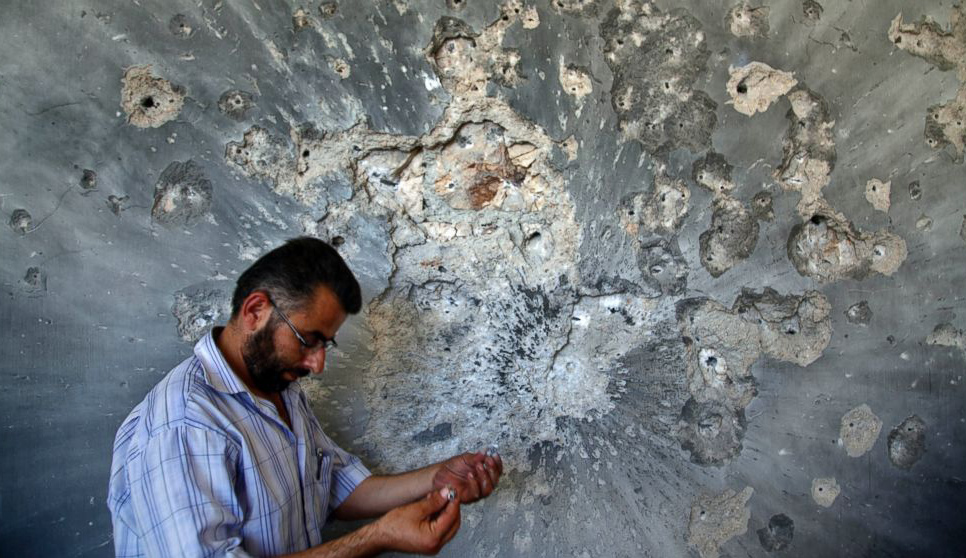 A Syrian man holds bullets he picked from the wall of a damaged house in the town of Atareb, on the outskirts of Aleppo. AP Photo/Khalil Hamra.


Ofir Haivry, an Israeli historian and political theorist, is vice-president of the Herzl Institute in Jerusalem and the author of John Selden and the Western Political Tradition (Cambridge). He served as chairman of the Public Advisory Committee for Examining Israel’s Approach regarding Worldwide Communities with Affinity to the Jewish People, appointed by Israel’s ministry of Diaspora affairs.

I greatly appreciate the three responses to my essay, “The Great Arab Implosion and Its Consequences.” Although David Pryce-Jones, Martin Kramer, and Amos Yadlin come from different directions, all three raise fundamental objections to my main thesis—namely, that the Sunni Arab regional hegemony has irretrievably collapsed—as well as to my main conclusion that, rather than attempting to resurrect that hegemony, or allowing Iranian or Turkish dominance, it would be better to let the region’s various nations, sects, and tribal confederations pursue a path toward self-definition.

Where the three respondents vary is in their evaluation of particular points and in their own scenarios for the future. Thus, David Pryce-Jones concedes “the absence” in the today’s Sunni Arab world of “anything to be triumphant about” and stipulates that some of the groups in the region, from Kurds to Alawites and even Christians, might indeed end up with their own states or at least autonomous statelets. But he also sees the possibility of some kind of Arab retrenchment or regrouping, perhaps as part of a Sunni rebirth, and therefore warns that my assessment of implosion or collapse might yet turn out to be premature.

Martin Kramer, for his part, regards what is occurring in the region since 2011 as nothing less than a Sunni “revival” after a century-long process of steady erosion. “From Riyadh to Raqqa,” he writes, we are now witnessing a struggle among those aspiring to control and channel this revival—a struggle likely to be won, and deserving to be won, by Saudi Arabia, which in Kramer’s view represents “the most successful instance of Arab state-building in the 20th century.”

Amos Yadlin is even more enthusiastic about Sunni prospects. In the past, as he sees it, the Middle East was characterized less by a single Sunni Arab order than by numerous competing Sunni orbits, but now the upheavals following the Arab Spring have finally “molded today’s Sunnis into a more unified bloc in the effort to maintain regional stability.” Indeed, Yadlin foresees a new “golden age” of unprecedented Sunni cooperation and even, in the long run, “the crystallization of a Sunni Arab network for economic and security cooperation [that] could well enhance the potential for governmental stability and longevity.”

Similarly grand hopes are now all the rage in Israeli defense and foreign-policy circles. In their own way, they remind one of Shimon Peres’s Oslo-intoxicated, mid-1990s vision of a “New Middle East.” Then, too, it struck many Israelis as both feasible and desirable to build a regional strategy upon an alliance with Arab dictators who had shown themselves inept at everything except impoverishing their own people and ruthlessly crushing internal dissent. Today, these same rulers or their progeny and legatees propose nothing more than resuscitating the same corrupt, cruel, and disastrous practices.

To me, any policy built upon such hopes is not only unsound, historically, morally, and strategically. It also harbors potentially destructive consequences for those who entertain it.

Let me first deal briefly with the main differences between my and my respondents’ reconstruction of the relevant history.

It is indeed the case, as both Martin Kramer and especially Amos Yadlin point out, that between the 1950s and 1990s, during the heyday of what I called the Sunni Arab paradigm, there was no lack of inter-Arab conflicts, like the Egyptian-Saudi one in Yemen and the Iraqi-Saudi one in Kuwait.

What my respondents ignore is that those conflicts took place within a securely shared confidence in the actual predominance of the Sunni Arab order: the mold within which the region had been cast since the 1916 Sykes-Picot treaty. That a non-Arab power like Iran or Turkey might come to dominate what seemed a solidly Arab world was inconceivable. It was therefore possible for the Alawite Assads to rule Syria, and the Shiite Saleh to rule Yemen, as long as they vociferously identified with the Sunnified narrative. Until the Arab Spring of 2011, these and all other Arab regimes blurred their sectarian identities and adhered to that same narrative—even as their own sectarian power practices were progressively undermining it.

Today, as my respondents also remind us, Sunni (and tribal) identities are replacing the dead Arab one. But what do the disintegration of Libya and Somalia, the fratricidal hatred that keeps Sudan and Algeria on the brink of civil war, the fragmenting condition of the regimes in Egypt, Tunisia, and the Palestinian Authority—all solidly Sunni—have in common if not the loss of that same identity, which has similarly brought about the dissolution of Iraq and Syria and Yemen?

In short, Sunnism was one major prop of the old Arab identity. Now that the old house has gone down, some are trying to build a new one around that one prop. Most probably it won’t work; certainly it won’t be the same house.

After all, it was the dissonance between rhetoric and reality that increasingly destabilized the various Arab “republics,” the regimes most invested in the Arab identity. All have either disintegrated completely (Iraq, Syria, Yemen, Libya, Somalia), been partitioned (Sudan, Lebanon, the Palestinian Authority), or barely survive today amid severe internal disruption (Egypt, Tunisia, Algeria).

As for the Arab monarchies, always less internally invested in the Arab identity, they, like their cheerleaders in the West, are now busy rooting their essentially tribal-based regimes in the soil of Sunni—that is, anti-Shiite—legitimacy. Since many have sizable Shiite populations under their rule, this move may not suffice to save them. Besides, the new Sunni identity, if ever successful, would necessarily mean a closer affinity of Saudi Arabia and Egypt with Sunni Turkey or Pakistan than with a Shiite-aligned Iraq or Syria or Yemen. In emphasizing the purported rise of a Sunni world, as Kramer and Yadlin do, one again loses sight of the underlying fact: the crumbling of Sunni Arab identity.

The point for today is this: where some may regard the Sunni closing of ranks—the emergency billions being doled out by Saudi Arabia to Egypt, Jordan, and Morocco, or the joint “Northern Thunder” military exercises—as successes, they in fact only underline the extent of the crisis. What they display is simultaneously the financial near-bankruptcy of the recipient states and the incompetence of Sunni military efforts to defeat ramshackle rebels in Sinai and Yemen.

None of these Sunni regimes, and none of their advocates, can point a way out of the death spiral they are now caught in. Without a massive change of course, which none is really willing to entertain, the current rebooting of the “New Middle East” will bring an even greater crash in the future. That is the real reason why Israel and the West should refrain from investing in a Sunni revival. It is not so much that (as Martin Kramer warns) a price will have to be paid for aligning with the Sunnis. It is rather that whatever is purchased for that price will be worthless.

Consider that the Sisi regime in Egypt is unable to put down atrocities being committed on almost a daily basis against the Christian Coptic minority, let alone to quell an Islamist insurgency in the Sinai. Consider that the Saudis remain the main financial patrons of various bloodthirsty Islamist militias in the region while continuing to fund fanatical imams viciously fulminating against Western values in mosques across Europe and the United States. Meanwhile at home, the Saudi regime is so weak that it cannot bring itself to allow its populace a say in the country’s governance, permit a Shiite cleric to plead for the basic rights of his downtrodden brethren, or allow a woman to drive.

As for the Saudi-led Sunni coalition, it has had to fight Yemen’s Shiite-led insurrection mostly with foreign mercenaries from non-Arab regions of Asia and Africa. Meanwhile, the greatest asset of Islamic State vis-à-vis the other jihadist militias of Mesopotamia is the massive influx it enjoys of foreign volunteers from as far away as Europe and China. Nothing signifies the fragility and futility of the “Sunni” exertion more than the fact that most Arab Sunnis appear unwilling to fight for it. Having been weaned off the Arab dream during the last two generations, for the most part they understandably refuse to rally to fight under a pan-Sunni banner at the service of an Egyptian strongman or the House of Saud. Indeed, far more Sunnis from Arab-speaking lands seem to prefer emigrating en masse to Europe or America over fighting for the corrupt Sunni regimes.

Will these pitiful wrecks constitute a main bulwark against Iran? Hardly. If it came to war, Tehran would need not much more than a couple of weeks to wipe the desert floor with the Saudi military and install its supreme leader Ayatollah Ali Khamenei at Mecca. Nor would the aid of Egypt and other Sunni allies appreciably alter the outcome. The only real bulwark against such a scenario is Tehran’s certainty that the U.S. and Israel would not allow it to take place. Therefore, Iran prefers to continue its currently successful strategy of encircling the Saudis with Shiite proxies in Iraq, Syria, and Yemen, and soon perhaps a Shiite majority in eastern Saudi Arabia itself, slowly whittling away at Riyadh until it either willingly prostrates itself or collapses.

Does this mean that the region will now remain in flux, and is destined to lack any stability in the foreseeable future? Not necessarily. In many places, especially in Iraq but also in Syria, formerly intermingled populations have been painfully displaced, making for more homogenous areas. In Iraq, Baghdad is now a solidly Shiite city; by contrast, in areas of the country controlled by Islamic State, Shiites and other minorities have fled, many never to return. Similar trends are under way in Syria.

The likely result of these unfortunate events is, increasingly, partition: either formal, like the one in Sudan since 2011, or practical, like the one in Lebanon since the mid-1970s. For Sunnis to reverse this trend would require resources they seem to lack. But, as I pointed out in my essay, smaller and internally more homogeneous political units may offer a better prospect for peace and stability in the region than the forcible unification of decomposed Arab states.

For Jerusalem and Washington, the lesson is plain. As with Yugoslavia two decades ago, there is a point at which efforts to recreate a map that no longer exists should stop, and be replaced with a hard and realistic look at the new map in formation.

A Better Future for the Middle East
1. Essay

The Great Arab Implosion and Its Consequences
2. Response

Is a Century of Sunni Arab Dominance Truly Finished?
3. Response

Revenge of the Sunnis
4. Response

Has a Golden Age of Sunni Cooperation Dawned?