That is: can the separation of church and state function for an increasingly unchurched people whose secular passions rely on the exercise of state power? 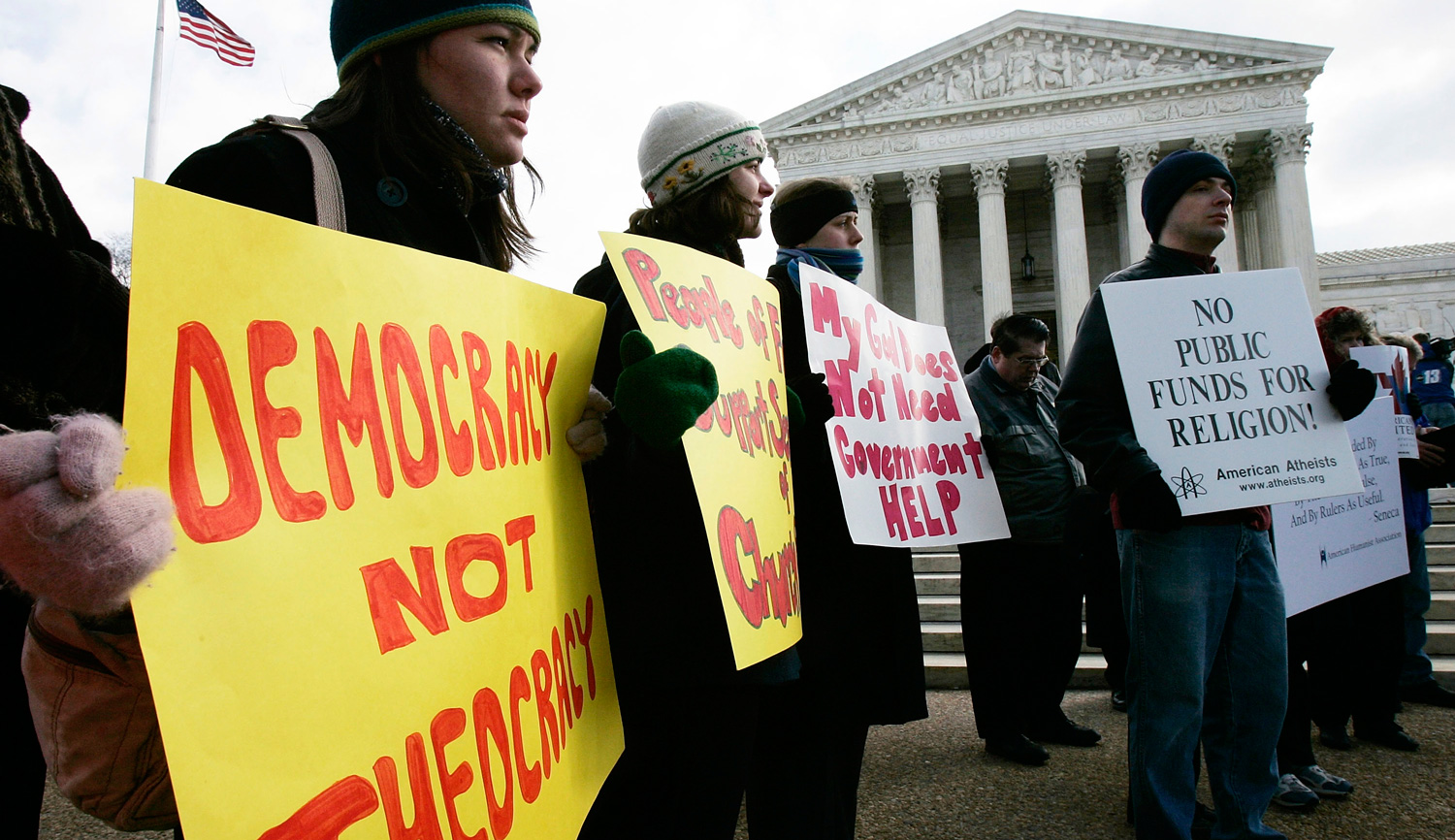 Activists during a rally in front of the U.S. Supreme Court on March 2, 2005. Alex Wong/Getty Images.


Richard Samuelson is associate professor of history at California State University, San Bernardino and a fellow of the Claremont Institute.

I want to thank David E. Bernstein, Wilfred McClay, and Peter Berkowitz for their kind words and thoughtful responses to my essay. In effect, all three suggest that, for American liberals and progressives, anti-discrimination is becoming nothing short of a religion, albeit one that denies it. More: it is becoming an established religion—a “secular theocracy,” in McClay’s words—and an official doctrine enforced by government.

David Bernstein poses three highly pertinent questions: how did we get to where we are today? Are things really so bad, or are there rays of hope? And what does today’s situation mean for America’s Jewish community? My comments will follow his order while drawing freely on the ideas and formulations of all three respondents.

How did we get here? Wilfred McClay reminds us that, of late, large-scale religious fights seem to be breaking out all around the world. So the question really is whether America will remain an exception—the place where, as he writes with a nod to Tocqueville, “religious belief and practice have generally flourished . . . because they are voluntary and have not had to rely on a religious establishment to protect them.”

Can that model still work as America grows less religious in the traditional sense? To put it slightly differently, can the separation of church and state, which historically worked wonders both for American democracy and for the flourishing of religion, function for an increasingly unchurched people whose secular (though religiously-held) passions are reliant on the active exercise of state power? How will those passions be checked and balanced? For, under one name or another, there will be religion; the question is what sort of religion, and how and by whom American law will be shaped to suit the adherents’ way of life.

Peter Berkowitz’s comments shed light on this issue. The rise of a newly activist understanding of government’s role in shaping society did not begin with the Civil Rights Act of 1964 (which is where I focused attention in my essay). It actually began in the late-19th and early-20th century with the rise of the Progressive movement. Progressives, Berkowitz writes, “sought to overcome constitutional limits on government by redefining the Constitution as a living organism embodying progressive morals and authorizing activist government by elite-educated, impartial technocrats.”

This description perfectly fits Woodrow Wilson, our first and so far our only president with a PhD, and also the first to advocate either replacing the Constitution or transforming it fundamentally through creative interpretation. In the 1920s there would be significant pushback against Wilson’s efforts. But ever since the 1930s Depression, when the next generation of progressives took over, there has been little successful containment, let alone rollback, of what the New Deal’s trust-busting lawyer Thurmond Arnold called the “religion of government.”

Still, New Dealers for the most part did try to contain their intrusions into civil society to the economic sphere. Over time, however, the itch to regulate expanded apace until, by the 1960s, decades after Progressives and their heirs launched their initial project to remake American government, turning to the blunt instrument of anti-discrimination law would seem the natural way to meet the challenge of Jim Crow. The result has been the anti-discrimination regime we live with today: the means by which to impugn and censure those who “understand ultimate things differently and . . . order their lives differently” (McClay), especially if that difference is mandated by their religion.

The legal and cultural rituals of this regime, and the moral ideas that come with it it, are changing how each rising generation understands what it is to be an American, what it means to be free, and what good government does. By and large, the progressive religion does not recognize a free and open civil society that leaves men and women free to follow their consciences in the conduct of their daily affairs. This is how, for instance, the notion that a business should be free to decide whom it serves and how it serves them has become an alien concept—so alien, as I observed in my essay, that even the Libertarian candidate for the presidency now believes that once one sets up shop, it is simply one’s job to do the government-enforced bidding of the anti-discrimination regime.

Of course, the officiants and congregants of this modern, perhaps post-modern church do not recognize their perspective as religious; to them, it appears the quintessence of scientific rationalism, defined as progress against a benighted past. But when people regard as “reason” ideas that are, in fact, a faith, it is very hard to talk them out of it. And when they hold political power, they are likely to act like nothing so much as a religious establishment. You may drive religion out with a pitchfork, but she will keep coming back.

Is the situation so dire? Bernstein points to the “frontal assault” launched by the Obama administration against the ministerial exemption: a longstanding shield of “the right of religious institutions to choose their religious staff free from the interference of secular law.” In a case heard by the Supreme Court in 2011, he writes (in responding to readers’ comments on his essay at the Mosaic website), the administration “stunned the Court by arguing that . . . there should be no ministerial exemption at all.”

That position was congruent with, perhaps even a step beyond, the administration’s effort to redefine the free exercise of religion as merely the freedom of private worship. It was also congruent with the position of such stalwart progressive organizations as the American Civil Liberties Union, which in a dramatic about-face had switched its former support of the 1993 Religious Freedom Restoration Act to fervent opposition. In the event, however, the administration seems to have miscalculated: the Court stood firm, unanimously upholding the ministerial exemption and even applying it more rigorously than lower courts had done.

So far, then, the Supreme Court has blocked the most egregious move against religious liberty by a U.S. president. That is certainly a sign of hope, though the victory may yet turn out to be temporary. And it was only one incident in a larger battle against determined disrepecters of religious liberty. Much more remains to be done, on multiple fronts.

Berkowitz, for his part, suggests that the battle must be won in the schools. No doubt, given the values that so many of our schools impart to our children, from kindergarten through university, he is right about that. This alone suggests the extremity of the danger, and the sustained labor required to meet and overcome it.

As for the implications of this story for America’s Jews, Bernstein hints at and McClay more bluntly points to debilitating divisions with the American Jewish community itself. As Bernstein notes, ḥaredi elements of the community are growing at an astonishing annual rate of over 5 percent. Meanwhile, however, the majority of Americans of Jewish ancestry have come to view their Jewish identity as a purely cultural heritage—a heritage, moreover, often associated by them with today’s secular progressive values.

In a similar vein, McClay writes about the extent to which non-Orthodox and non-affiliated Jews tend to identify themselves with the “illiberal liberalism of the ACLU and the golden principle of non-discrimination,” which, some profess to believe, are evidence of a benign evolution from Jewish teachings themselves, with the rabbinic term tikkun olam redefined after the fashion of a “living” reinterpretation of the Constitution. Seeing things rather differently, most Orthodox Jews, by contrast, are much readier “to fight hard to preserve the integrity and autonomy of their institutions and their way of life.” From such deep disagreements come serious divisions: injurious if not fatal to communal solidarity in the face of a common threat. It is not unthinkable, for instance, that progressive Jews would support a state that was making life difficult for their Orthodox cousins.

In sum, the dangers to religious liberty that are facing the Jewish community are inseparable from the dangers facing other believing Americans. For those prepared to resist, or contemplating the benefits of joining forces with others of like disposition, it may help to bear in mind that Progressivism was once a small intellectual movement, and that just as there are no final victories in politics, so there are no final defeats.

Who's Afraid of Religious Liberty?
2. Response

How Anti-Discrimination Became a Religion, and What It Means for Judaism
3. Response

The Rise of the Secular Theocracy
4. Response