This is a response to Who's Afraid of Religious Liberty?, originally published in Mosaic in August 2016 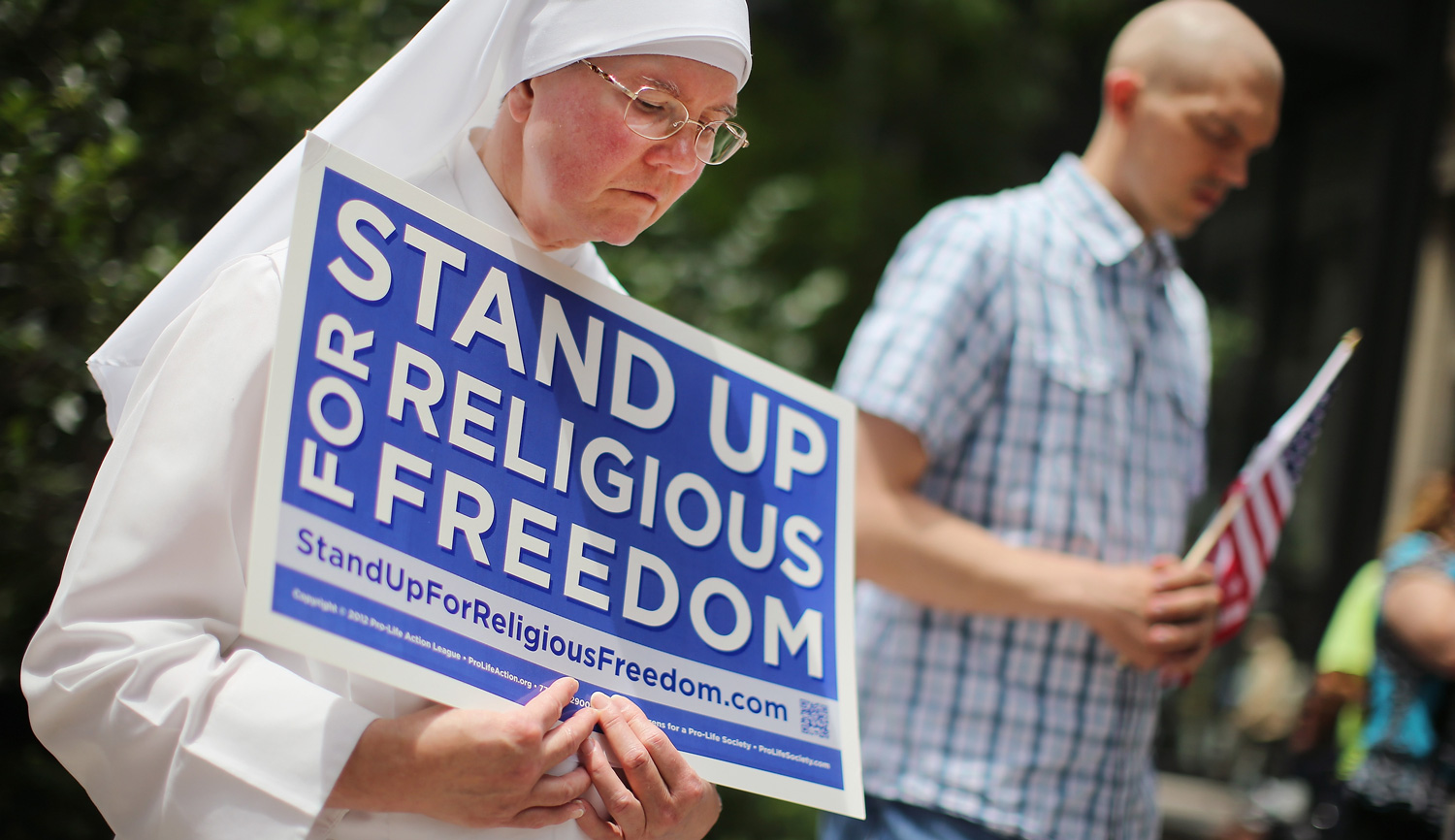 A nun at a rally with other supporters of religious freedom in Chicago, 2014. Scott Olson/Getty Images.

The first clause of the first of the first ten amendments to the United States Constitution enshrines religious liberty. The opening words of the Bill of Rights accord this honor to religious liberty because, if government were to establish a state religion or interfere with the free exercise of religion, our other precious liberties would sustain a blow. It is a short step from government’s prescribing beliefs and dictating practices concerning citizens’ fundamental duties and highest hopes to government’s depriving citizens of their property and imprisoning them for deviating from the state’s religious—or irreligious, or anti-religious—orthodoxy.

The First Amendment also underscores the intimate connection between the protection of religious liberty and the exercise of political liberty by immediately following the prohibitions on governmental establishment and state regulation of religion with guarantees of freedom of speech, press, assembly, and petition of government.

Any threat to religious liberty in America, the Constitution’s Bill of Rights teaches, endangers all liberties.

In “Who’s Afraid of Religious Liberty?,” Richard Samuelson bracingly argues that the threat to religious liberty today is real and growing. He starts with the threat to Jews: the alarming resurgence of anti-Semitism in Europe, accompanied by a hugely disproportionate number of hate crimes against Jews in the United States and the “anti-Israel agitation” and “anti-Semitic vilification” that are common on American university campuses but have “leapt beyond the precincts of the academy to infiltrate American political discourse.” And this threat, maintains Samuelson, is compounded by a dangerous transformation of Americans’ conception of liberty in general and of religious liberty and liberty of association in particular. In a misguided quest to use government to eradicate every form of and vestige of discrimination—that is, drawing distinctions among people—progressives, he writes, “isolate, impugn, and penalize dissenting views held by Americans of faith” that undergird “the conduct of their religious lives.”

The campaign to eradicate dissenting opinion through the force of law, Samuelson argues, represents a perversion of the political principles on which America was founded. To secure individual liberty, the Constitution established a limited government. The limits were designed to reflect the distinction between the public sphere, rightly regulated by government, and the private. The latter included a diverse and vigorous civil society in which individuals enjoyed wide-ranging freedom, not least the freedom within broad boundaries to believe, think, speak, and act as they wished and to associate or not with whomever they pleased.

The enactment of the 1964 Civil Rights Act, Samuelson writes, marked a turning point. While intended to serve the noble goal of ending government-sanctioned discrimination based on race, religion, sex, or national origin, the act was hijacked by progressive activists. In the name of ending discrimination, they have used it to outlaw private conduct that does not comport with contemporary progressive norms.

Religion is the new front. Legal efforts to compel Christian photographers and Christian bakers to participate, contrary to their religious beliefs, in same-sex weddings when plenty of other photographers and bakers are available are no longer inspired by the entirely proper aim of protecting gay men and lesbians from discrimination in the public sphere but rather seek to bring the faithful to heel and show the pious who is boss by circumscribing their exercise of religion and controlling their associations.

One might have hoped that the writings of Robert Conquest, Arthur Koestler, George Orwell, and Aleksandr Solzhenitzyn about the horrors of Communist totalitarianism would have decisively taught that the ambition to outlaw departures from state-sanctioned opinion through government-imposed uniformity of thought and conduct culminates in tyranny. But the contemporary legal campaign to curb the free exercise of religion in order to establish the left-wing interpretation of liberalism as America’s state religion shows that such hopes are misplaced.

The assault on liberty, Samuelson speculates, may be one cause of the tremors shaking American politics: “In today’s fevered political climate, one cannot help wondering how much of the felt national anger might be traceable to the juridically-abetted effort to force all Americans onto a uniform cultural page.” He concludes that Jews have both a “collective interest” and a “historical responsibility” to help restore “a healthier understanding of liberty,” one that “would be good not only for traditional Jews and Christians but for all Americans.”

Jews do indeed have such an interest and such a responsibility. What minority has benefited more from America’s promise of religious liberty? What minority better understands, or should understand, the evils of intolerance? But in what would restoration consist? Where should it begin? Sound answers call for a more precise understanding of the origins of the problem. Samuelson leads the way, but the sources run deeper than the recent developments on which he focuses.

The ambition to impose a single, government-approved moral and political culture on America has roots in the original progressivism of the late 19th and early 20th century. That progressivism sought to overcome constitutional limits on government by redefining the Constitution as a living organism embodying progressive morals and authorizing activist government by elite-educated, impartial technocrats.

In fact, the governmental powers that progressives would eventually seize upon to enforce progressive values long predate not only the Civil Rights Act of 1964 but also the emergence of the original progressivism itself. They can be traced to the constitutional revolution immediately following the Civil War and are embodied in the Thirteenth, Fourteenth, and Fifteenth Amendments. These necessary and desirable changes to the fundamental law of the land outlawed slavery, guaranteed freedom and equality, and prohibited denial of the right to vote based on race.

The 14th Amendment in particular greatly expanded the power of the federal government by making it responsible for ensuring that states honor due process and provide equal protection of the laws for all persons. At the same time, the Fourteenth Amendment greatly expanded the temptations at the federal level to circumvent limits on the use of government power. Later, progressives would succumb to this temptation and reinterpret it as a moral imperative.

Indeed, the temptation to turn limited government into unlimited government runs deeper still in the American political tradition. Samuelson points out that even though the Civil Rights Act of 1964 touched on economics only remotely and indirectly, it was justified under the Commerce Clause, a part of the original Constitution. As it happens, the authors of The Federalist were well aware that the specific power granted by the Constitution to Congress “to regulate commerce with foreign nations, and among the several states,” combined with the general power “to make all laws which shall be necessary and proper for carrying into execution” such specific grants of powers, was subject to abuse.

To rein in lawmakers who, out of reckless enthusiasm or scheming ambition, would erode individual liberty by extending federal authority beyond its constitutionally assigned limits, The Federalist counted on the separation of powers, checks and balances, popular sovereignty, and, not least, office holders and citizenry inclined to interpret the Constitution in the spirit in which it was written. Sadly, however, appreciation of such rudimentary principles of American constitutionalism is fast vanishing among America’s elites. And this is not an accident. Our elite colleges and universities—which train our preeminent journalists, our Hollywood aristocracy, and the next generation of our professors—studiously ignore, when they don’t disparage and dismiss, America’s founding principles while assiduously promulgating the idea that good government promotes progressivism.

Friends of freedom and limited constitutional government must vigorously resist, through courts and in state legislatures and in Congress, legal efforts to impair religious liberty. But the long-term battle for religious liberty in particular and individual liberty in general will be won or lost in the field of education. There is a striking correlation between the post-1960s decay of liberal education in America and the post-1960s reinforcement and diffusion of the presumption that it is proper for the federal government to strive to induct American men and women into the progressive mold.

Only an education that is grounded in the belief in individual freedom, and that therefore seeks to transmit knowledge rather than serve up propaganda, that aims to refine students’ ability to think for themselves rather than to recite socially approved opinions, and that places at the core the critical study of the tradition of liberty under law—particularly the American experiment in constitutional self-government—can hope to fend off the contemporary assault on freedom.