Where Would Russia's Jews Go?

The situation for Jews in Russia is far from ideal. But where is it ideal? 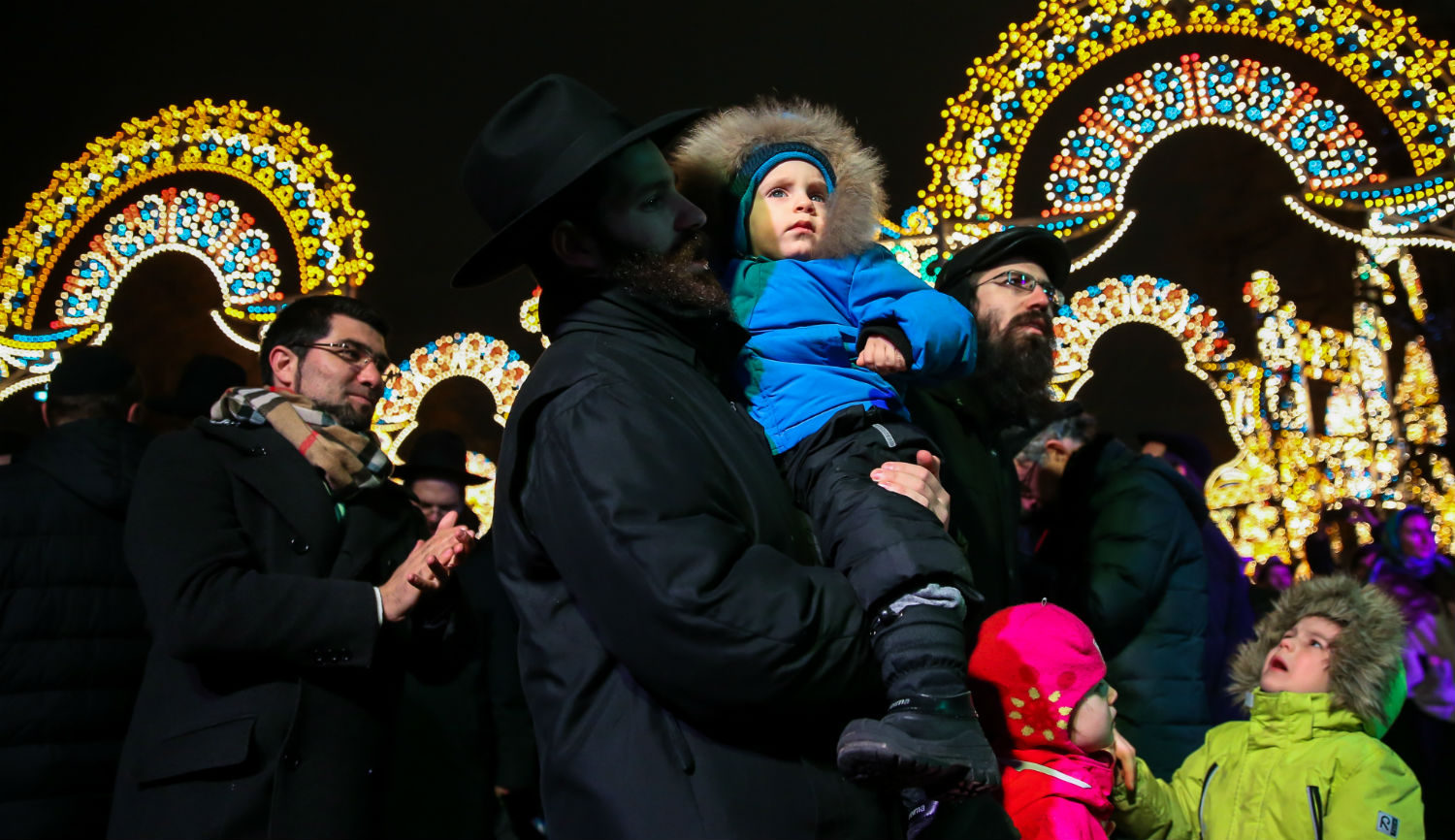 Response
Konstanty Gebert
About the author


Konstanty Gebert, a columnist and international reporter with the leading Polish daily Gazeta Wyborcza, is the author of eleven books and co-founder of Midrasz, a Polish Jewish intellectual monthly.

Maxim Shrayer’s perceptive, moving, and funny essay, “The Prospect for Russia’s Jews,” puts me in mind of a joke that was fresh when the world was still young and that I’ll render here in an updated version.

An elderly Jew goes to see the ruler of his country, with whom he shares a bond forged in youth. The political climate has taken a turn for the worse, and Jews fear they will end up paying the price. So they want out—but the borders are closing. “Let my people go,” the Jew pleads. The ruler is heartbroken: he does not want to lose his old friend yet cannot refuse him, and so he grants the request. “Where will you be going?,” he inquires solicitously. “Western Europe?”

“To those anti-Semites? Over my dead body.”

“Haven’t you heard what’s going on in the universities there, and lately in the cemeteries?”

“Well, of course there’s Israel. But after all the troubles we’ve had here, should we really go looking for more?”

“Look, friend,” says the ruler, “I’ve said I’ll let you go—but where to?” The old gentleman thinks for a moment and then asks for a globe. The ruler has one brought in. His guest examines it for a few minutes and then asks, unhappily, “You wouldn’t have another one, would you?”

I’m sure Maxim Shrayer knows this joke, a basic staple of Polish and Russian Jewish humor. Yet the main question he keeps asking himself in his essay is not where Russian Jews might or should go if they decide to leave but why they are still there at all. He is right to be apprehensive about the situation in Russia and the possibility that history will endanger a Jewish future there—and the evidence he brings to bear on this point is certainly worrisome though obviously not conclusive. But he also seems to assume that they are assured of brighter futures elsewhere.

Being a Polish citizen in the era of the ruling Law and Justice party, I find this latter assumption debatable at best, and the same goes for the EU as a whole. As for America, even there Jews have recently contracted a case of the jitters, some would say belatedly. And as for Israel, a number of the first-person testimonies recorded at the end of Shrayer’s essay suggest that a Russian  Jew’s problems are hardly solved once he or she hits the tarmac at Ben-Gurion airport—an impression I doubt even the most gung-ho Israeli would deny.

All of this would be moot if Russian Jewry were to face an immediately dire threat; present dangers make potential ones irrelevant. But Shrayer does not claim any such threat is in the offing; his fears are more anecdotal, though no less valid for that. For instance, he broods over the fact that the streetcar stop at the Jewish Museum in Moscow is neither marked nor announced by that name, an omission that strikes him as symptomatic of something more ominous. Nor is he wholly satisfied by the explanation he’s given—namely, that the term “Jewish” is still somewhat deprecatory in Russian, which would suggest why the public-transport authorities are not eager to flaunt it.

Such an explanation is of course worrying in itself, and I resonate both to Shrayer’s dissatisfaction with it and to his general exasperation with the non-naming of the museum for what it is. Still, it’s not so clear that a slur is intended—as I can attest by adducing a local example of my own. In Warsaw, although the stop near the National Museum does indeed announce itself by that name, the stop near the Museum of the History of Polish Jews (which Shrayer briefly refers to) bears only the name Nalewki-Museum. In Polish, “Jewish” used to have the same deprecatory connotation as in Russian. The connotation faded after World War II as surviving Jews mainly left the country and almost no one was left to insult. Yet it is still used uneasily: at an interreligious event, I was once identified by the presiding Catholic priest as “a Jew—as he himself has said.”

The fear here is endangerment, and it is justified. During and immediately after the war, to identify someone as a Jew was to raise a threat to his life. Later, especially during the anti-Semitic campaign of 1968, it meant outing someone, exposing him to political repression. And still today people are uncomfortable using the word without first checking with the person involved: discomfiting memories run deep.

In Warsaw, the name of the stop contains an added layer of irony. Before the war, Nalewki used to be the main street of the city’s Jewish district, and its immediate association, even today, is only with Jews. The street was obliterated when the Germans razed the ghetto they had set up, and it was not rebuilt during the postwar reconstruction. The name survived, however, being given to a small nondescript alley between apartment blocks near the location both of the prewar street and of the present-day museum. Calling the stop Nalewki-Museum is therefore like a coded reference: it’s the museum of the folk who used to live on Nalewki Street when there was one. To quote the midrash on a verse in Proverbs, a word to the wise suffices.

In sum, the reasons for not properly naming the Moscow and Warsaw museum stops may be vile or noble, or a mixture of the two. But the fact that even the word “Jewish” makes people uncomfortable points to what is, in my eyes, the main problem: Jews don’t quite fit. And if times get tough, whatever does not fit is the first to break—or to be broken.

The great irony is that, at different times in both Russia and Poland, Jews once believed they finally did fit in. In the 1920s and 30s, the mass integration of Jews within the Soviet Union—celebrated, as Shrayer notes, in a gallery devoted to this theme at the Jewish Museum—made Polish Jews envious. To be sure, there was a tall price to be paid for integration—namely, the abandonment of a separate Jewish identity—but this was arguably the same price paid by all Soviet subjects. As in the infamous official formula for the USSR’s ethnic cultures—“national in form, socialist in content”—Ukrainians could no longer be Ukrainian, Kazakhs Kazakh, or even, to an extent, Russians Russian (though the language of the last-named gave them an advantage over everybody else).

Eventually, as we know, the Soviet system betrayed even that promise.

In interwar Poland, Jews were also rapidly assimilating. But there, by contrast, they were told they could never be fully integrated or belong, no matter what price they were willing to pay. Such a moment of “fitting in” would not arrive until the postwar era, when, under a comparatively less repressive Communist regime, the remaining Polish Jews became the envy of their Soviet brethren—at least until the 1968 campaign when Poland briefly became as anti-Semitic as the USSR was routinely. Later, after the fall of Communism in the early 1990s, Polish Jews would envy Russian Jews their numbers, and Russian Jews would envy Polish Jews the freedom and acceptance they enjoyed in Polish society at large and that finally seemed guaranteed with the country’s eventual membership in the EU.

Developments in the last few years, however, clearly show that nothing is ever guaranteed: public-opinion polls in Poland show a very sharp increase in xenophobia, mainly aimed at Muslims (even less present than Jews). On the Warsaw subway, my kippah attracts stares and the occasional nasty comment but also, and more frequently, expressions of sympathy. But none of this rivals the blessed total lack of interest the same kippah elicits on the Moscow subway, where people wear all kinds of weird things on their heads and nobody cares. Occasionally, a multi-ethnic authoritarianism can feel more relaxed than a homogeneous democracy.

As large numbers of Russian Jews began leaving their country in the years after the fall of Communism—mainly, like other Russians, simply to find a better place to live—I used to hope that some would decide to move to Poland. The country was becoming richer and safer, giving it, I imagined, a competitive advantage over the otherwise preferred destinations of Germany and the U.S. After all, Poland was closer to the emigrants’ former home, and its culture and its ways of doing things were more familiar—not to mention the fact that Russian Jews were originally Polish Jews. Even a small influx of 20,000, I thought, would invigorate the tiny Jewish community, no doubt causing conflict at first but finally redounding to the common good. But almost none came; the advantage I saw was not clear to them, and today it seems steadily less so.

Political developments in Russia will, as Maxim Shrayer’s essay shows, probably make voluntary emigration an ever-growing option. But where to? In our joke, the reactions of the elderly Jew to his regent’s suggestions, though sharply expressed, are reasonable enough. Germany, France, even the U.S.—all, to varying degrees, raise apprehensions. Sure, there’s Canada, Argentina, and Australia, each of which has the virtue of being far away from the hot spots; but that virtue, reflected in the relative smallness of their Jewish communities, does not really solve the underlying question.

Thus do events challenge the belief that, somewhere in the Diaspora, Jews will finally fit in. And then there is Israel, where, as we are ceaselessly and very correctly reminded, fit they do. Still, for the most part, Israel remains a destination for those urgently fleeing or for the young and committed.

Anybody have another globe?

Where Would Russia's Jews Go?
1. Essay

The Prospect for Russia's Jews
3. Response

The Roots of Today's Revival of Russian Judaism Lie Deep in the Soviet Past
5. Last Word