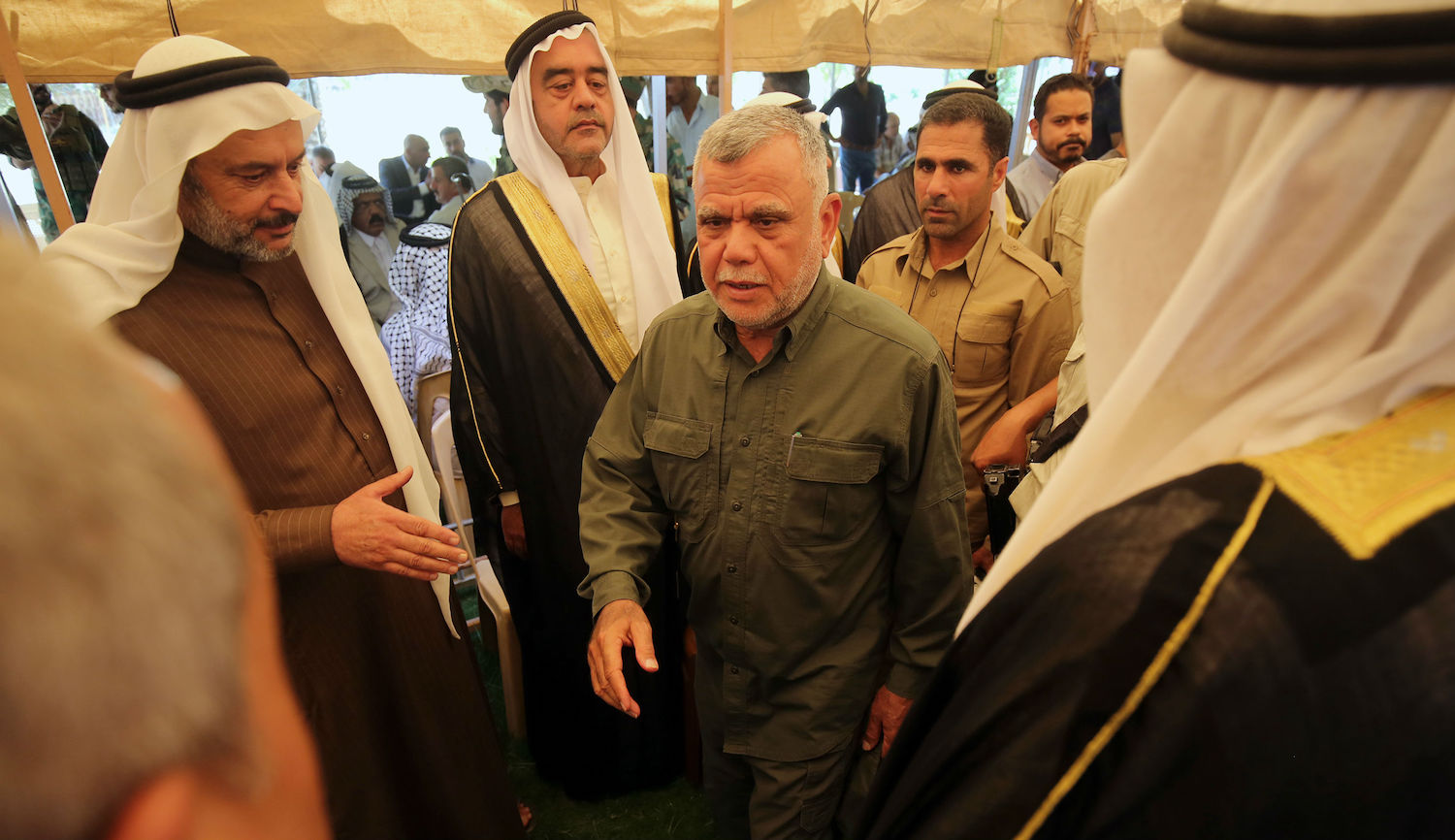 The leader of an Iran-backed Iraqi militia in Mosul, Iraq on August 30, 2017. AHMAD AL-RUBAYE/AFP/Getty Images.

Michael Doran and Peter Rough’s essay on U.S. strategy in the Middle East makes for a fascinating and provocative read. Its combination of strategic savvy, regional expertise, and formidable writing is not only broadly compelling but almost hypnotic in its deployment of overarching themes, incisive analysis, and a staunchly maintained point of view.

And yet, for a reader looking for help in rethinking his or her own potentially changeable views on these matters of strategic import, there are also problems with their approach. To see why, it is necessary to extricate oneself from the overall sweep of the narrative and focus on specifics.

Doran and Rough are at their best in the essay’s unsparing and hard-hitting critiques of the preceding administration’s policy toward the region. They argue, persuasively, that President Obama was largely wrong in thinking he could minimize the U.S. role in the region while cooperating at some level with Iran as well as Russia.

In making this case, however, Doran and Rough are, at least implicitly, too gentle on Obama’s own predecessor. After all, if President Trump has inherited the Middle East that Obama bequeathed him in January 2017, Obama inherited a very tumultuous region from President Bush in January 2009. Unless, for example, one were to insist on blaming the entire disastrous course of the Arab Spring on Obama (partially fair, but only partially), it’s imperative to acknowledge that its onset in early 2011 only worsened a situation that was already fraught and highly complicated.

Similarly, their trashing of the 2015 Iran nuclear deal, while again partly convincing—particularly in contending that we erred in making the agreement’s stipulations so transitory—never weighs the deal as done against its realistic alternatives. As for their assertion that, in withdrawing prematurely from Iraq, Obama effectively handed the country to Iran, this ignores the fact that Iraqi Prime Minister Nouri al-Maliki—the real culprit here, in my view—came to the fore during the Bush presidency, while it was Obama’s team that cajoled the Iraqis into replacing him with Haider al-Abadi (a much better figure) in 2014.

Finally, when it comes to next steps, I would question Doran and Rough’s confidence that a reassertion of American power can shape the region as much as they seem to believe. The root issue here is their contention that America is in a zero-sum competition with the Islamic Republic of Iran that we must win. As against this I would maintain that, since shutting Iran out of the region altogether is simply implausible, we need to think hard about which aspects of Iranian influence we find most problematic, and which ones we can live with.

With that in mind, let’s bear down on two countries in particular—Iraq and Syria—where, according to the authors, current trends are working strongly in favor of Iran’s expansionist and hegemonic ambitions and decisively against the interests of the United States. What would a workable American policy amount to? Doran and Rough offer recommendations along the following lines:

(1) Since, in both Iraq and Syria, any regimes friendly to Shiite Iran will be poor partners for the United States, we should develop stronger ties with Sunni tribes as alternative sources of leverage.

(2) In Syria, in order to exert American influence with groups that, even after the defeat of IS, are in danger of turning to Damascus, Tehran, and Moscow (or of being overrun by forces supported by one or more of those actors), we should remain engaged in areas in and around the IS capital city of Raqqa as well as in the Kurdish zones, perhaps even establishing a quasi-permanent U.S. military presence in eastern Syria.

(3) We should inform other major regional players that future American support and largesse will be conditional on their distancing themselves from Iran.

(4) Whatever comes of current scandals in domestic Israeli politics, we should support Prime Minister Benjamin Netanyahu, a real friend of the United States. And the same goes for other friends of America in the region who are beset by even more serious problems at home.

With the first two recommendations I agree strongly. Especially interesting and useful is the suggestion to maintain a lasting U.S. military presence in eastern Syria. This comports with what others (including Fred and Kimberly Kagan) have been proposing of late, and I’ll return to it below. But how does this differ from existing American policy?

Of course we can’t know for certain what Obama would have done were he still in office, but toward the latter part of his term he did increasingly recognize the need to raise America’s game—belatedly, to be sure, but unmistakably. For his part, Trump seems to be headed in this direction as well, and by doing so he has, as Doran and Rough justly concede, largely picked up where Obama left off.

Less compelling, however, are points (3) and (4). Staying with our unsavory friends in the Arab world is, to my mind, precisely what produced phenomena like Hosni Mubarak in Egypt and then the spiraling events of the Arab Spring and its disastrous supplanting by the Muslim Brotherhood, as well as the unfortunate strongman tendencies of President Abdel el-Sisi. Meanwhile, our loyalty to Saudi Arabia may actually have contributed to the kingdom’s many mistakes in Yemen, among other challenges and missed opportunities. Forcing countries like Jordan to choose between Washington and Tehran may simply put them in Iranian crosshairs, with no likely major benefit to our own regional influence. And so forth.

Overall, what this suggests is that Doran and Rough have diagnosed a much bigger and nastier set of problems than they have proposals to solve. This is hardly an unusual predicament in formulating public policy, especially where the Middle East is concerned. But, given the severity of their critique of Obama, it is a point worth keeping in mind. In light of the frequent intractability of the issues in that region, Obama’s choices, while far from ideal, become at least somewhat easier to understand, and easier still if compared with their realistic alternatives. And that leads to a second, pragmatic point: analyses like that of Doran and Rough might win greater credence from liberals reconsidering their own positions did they not sound quite so partisan, or so dogmatic.

And so, in a spirit of comity and inclusiveness, I’d like to end by building on what I see as Doran and Rough’s truly creative ideas toward Iraq and Syria, an area in which I think they could go even farther than they do. In staccato form, I would pinpoint some or all of the following four initiatives.

First, even after the fight against IS is done, we should direct a significant amount of both military and economic aid to helping Iraq rebuild itself, thereby also helping repair Sunni-Shiite-Kurdish schisms within that country (and thus reduce the chance of an “IS 2.0,” as Doran and Rough call it, emerging in the future). In particular, we should also retain some ongoing American leverage and influence with the Iraqi military and government.

Second, we should develop further, and plan to sustain, an American military presence and leverage within Syria—not only in the Sunni east but also in the Kurdish areas around Idlib (where the fight against the former al-Nusra Front, an al-Qaeda affiliate now known as the Front for Conquest, is far from over) and in the Kurdish north (as I believe Doran and Rough also favor). In maintaining our influence with those groups, we should simultaneously work to mitigate Turkish fears that the Kurds in the region will seek independence.

Third, even while Assad remains in power in Damascus, we should funnel international reconstruction aid into rebuilding liberated regions that are free of regime and/or Iranian presence. Retired General John Allen and I recently advanced such a proposal, which dovetails with Doran and Rough’s insistence on withholding aid to the Assad regime for the foreseeable future. (Here I myself might make an exception for humanitarian aid after ceasefires have been established.) Providing international reconstruction aid quickly for liberated and autonomous regions might even help cajole Assad out of office sooner, since the main cities of Syria controlled by him would be ineligible for assistance as long as he stays in charge.

Finally, where Iran is concerned, I would tolerate a more nuanced approach than that recommended by Doran and Rough. For instance, I do not believe it realistic to aspire to create a future Syrian government in which Iran would have no influence. More generally, while we do need to compete with Iran throughout the region, there will be cases where doing so will require a tolerance for more shades of gray within existing regional alignments than Doran and Rough seem ready to accept or endorse. Thus, I believe we should work to retain our leverage with the Iraqi military and government even if they also have a relationship with Iran.

With a better mix of boldness and realism, we still may not solve our Mideast woes; but we may get closer to mitigating them.