To Michael Doran, the administration’s many statements and actions concerning the Middle East reflect a “coherent vision.” If true—which is doubtful—it’s the wrong vision. 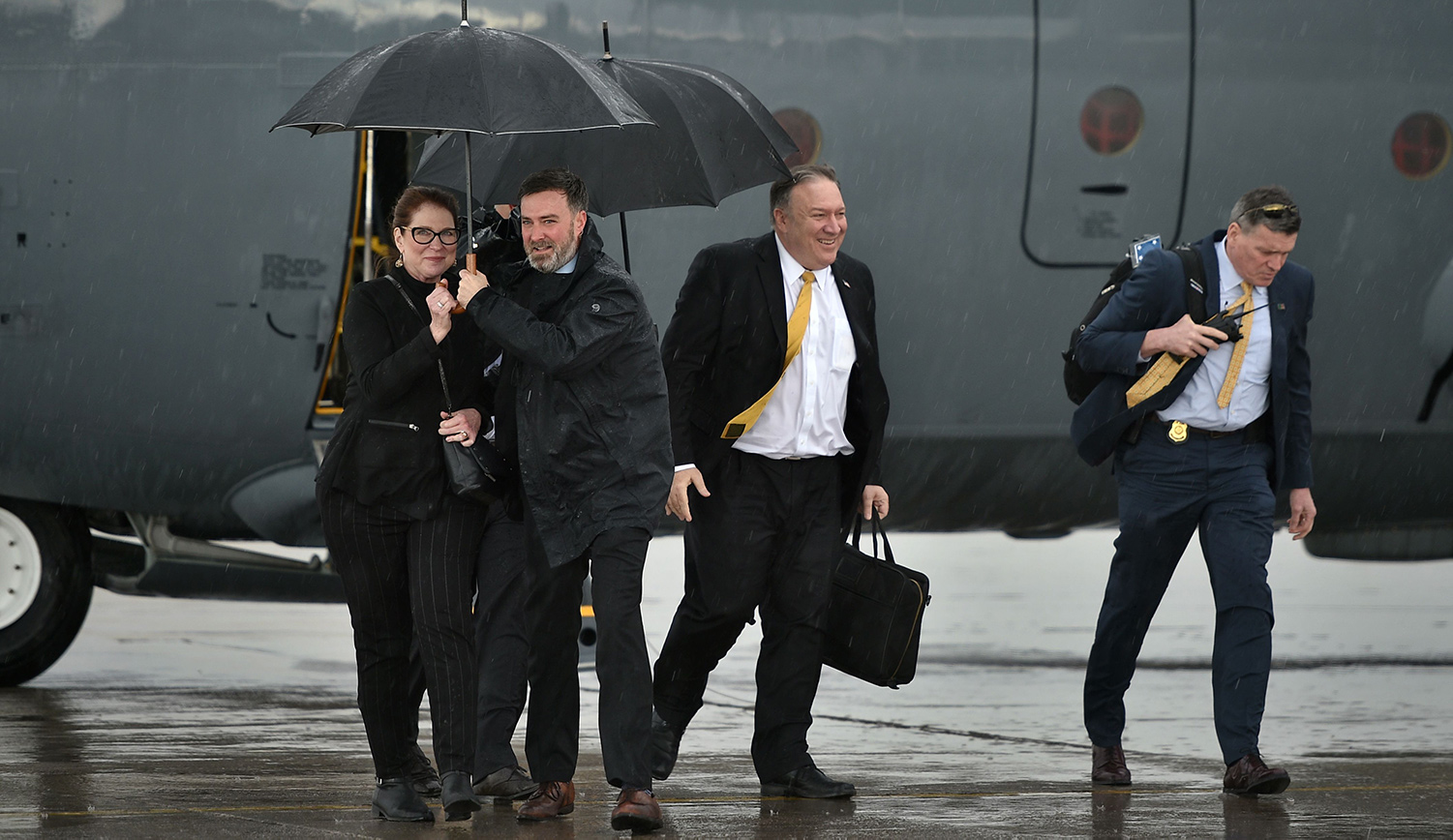 Secretary of State Mike Pompeo and his wife Susan disembark from their aircraft as they arrive in the Iraqi city of Arbil on January 9, 2019. ANDREW CABALLERO-REYNOLDS/AFP/Getty Images.

In his new essay in Mosaic, Michael Doran, whose writings about the Middle East are invaluable, has tried to explain . . . everything. That is: to document the damage done by President Barack Obama in destroying traditional U.S. alliances in the Middle East; to demonstrate why cozying up to enemies and treating allies with contempt is dangerous; to alert us that the Obama “echo chamber” is still hard at work advancing the former president’s agenda; to analyze how a rupture in relations with the Saudis would be a foolish move; and to register the peril contained in the moral preenings of too many American journalists and politicians.

And then Doran sets himself the really difficult task: to make sense of, and to defend, the policies in the region now being implemented by the Trump administration.

I know how hard this is to do because I’ve tried it myself. Last November, I wrote in the Israeli newspaper Haaretz that the president “has reasserted that the U.S. knows who its friends are and who they are not, a simple, old-fashioned, yet absolutely indispensable stance for a world power.” In his recounting of the many ways in which President Obama’s deviations from that stance harmed our national-security interests, Doran shows in detail exactly why the distinction between friends and adversaries is so critical for us and our allies.

But, in that same piece in Haaretz, I also wrote something about our current president that brings Doran and me into disagreement:

The president’s desire to avoid being dragged into more Middle East ground wars will conflict with his wish to support friends and allies and his intention to push back against Russia and Iran.

Doran is at pains to argue that this is not true. First, he suggests that the administration’s many inconsistent actions and statements concerning the Middle East, the latest of which was the December 19 decision to withdraw from Syria, actually reflect a well-thought-out and consistent policy—in his phrase, “a coherent vision.” That’s not clear to me: the decisions of the past two years may instead reflect the many individuals who have affected decision-making (Rex Tillerson, John Kelly, James Mattis, John Bolton, Mike Pompeo, and for that matter Mohammed bin Salman, Recep Tayyip Erdogan, Benjamin Netanyahu, etc.), not to mention the president’s own changes of mind.

Doran’s counterclaim—that all the diverse strands and individual decisions concerning Yemen and Syria, Iran and Israel, Iraq and Egypt, come together into a “coherent vision”—reminds me of Monsieur Jourdain in Molière’s play Le Bourgeois Gentilhomme. Jourdain learns, to his amazement, that for 40-odd years he has been speaking prose without knowing it; we now learn that the administration’s actions and statements appear inconsistent but are actually, guess what, a Middle East policy.

Second, Doran describes this policy as a sensible—indeed, the only sensible—middle way between the “interventionist” and “muscular” approach of neoconservatives, which lacks “mainstream support,” and the disastrous Obama approach of ceding ground to enemies. He writes: “either the United States will build a security system with its own military or with the allies’ militaries, or it won’t have one at all.” Since the president has made clear his aversion to an active U.S. military presence in the Middle East, the “best option” available is “to work through allies” who can supply the needed muscle—which is precisely the option that Doran sees being followed by the administration.

Here is the essence of our disagreement. In my view, the United States will build a security system with its own military or it won’t have one at all. As with our Asian allies facing China, as with our European allies and NATO facing Russia, our alliances in the Middle East will not work if we confine ourselves to providing some weapons and some intelligence but no more.

This does not suggest that it would be wise to send hundreds of thousands of Americans to fight again in the Middle East; it would not. But a policy that cannot even abide the sustained presence of 2,000 soldiers on the ground in Syria will likely fail.

Doran’s essay expresses greater optimism on this score, but his previous writings suggest he might well agree that the neoconservative assessment is sounder and that its “muscular” approach is likelier to succeed; his problem is that, in today’s circumstances, he thinks that approach is off the table.

It is certainly a hard sell in today’s Democratic party. And yet, even from those quarters I don’t recall reading about massive pressure to get those 2,000 troops out of Syria. To the contrary, after Trump’s December announcement, Senator Tim Kaine called the withdrawal decision “irresponsible,” and House Speaker Nancy Pelosi said it was a “Christmas gift to Vladimir Putin.” To Representative Ted Deutsch, the administration was “yielding American leadership to powers like Russia, Iran, and Turkey to decide the future of Syria.” To Senator Jack Reed, “the removal of U.S. troops from southeast Syria will cede a land route to the Iranians that will likely be used to freely move weapons and personnel across the region.”

And so forth. Needless to say, Democrats are always happy to criticize any decision made by the president, and there is surely plenty of hypocrisy at work here. Nevertheless, these Democratic leaders obviously did not fear that party politics demanded they either defend or say nothing about a withdrawal from Syria. Trump’s decision did enjoy strong support on the far left of the Democratic party and the far right of the GOP (mainly in the person of Rand Paul), but not in the mainstream of either. As Walter Russell Mead reminded the president, “The GOP base is more hawkish than isolationist.”

Besides, even if many voters do (silently) support withdrawing now, will they still feel the same way if, in a year, al-Qaeda and Islamic State succeed in regenerating themselves in Iraq and Syria and the president then says we need to reintroduce American boots on the ground? What will voters think if one of those groups manages to kill Americans in a terrorist attack?

Michael Doran is gambling that a policy of aid and comfort to our allies in the Middle East will be sufficient without any American military effort or presence to back it up. He believes this gamble is our best bet, or at least our only realistic bet. I think it won’t work. To be sure, it’s far superior to the Obama policy, as Doran well explains. But a better bet is to argue for the policy we need and to demand American political leadership that understands it and is prepared to explain it to the American people.

The Strategy Washington Is Pursuing in the Middle East Is the Only Strategy Worth Pursuing
3. Response