This is a response to What Christians See in Jews and Israel in 2020 of the Common Era, originally published in Mosaic in July 2020 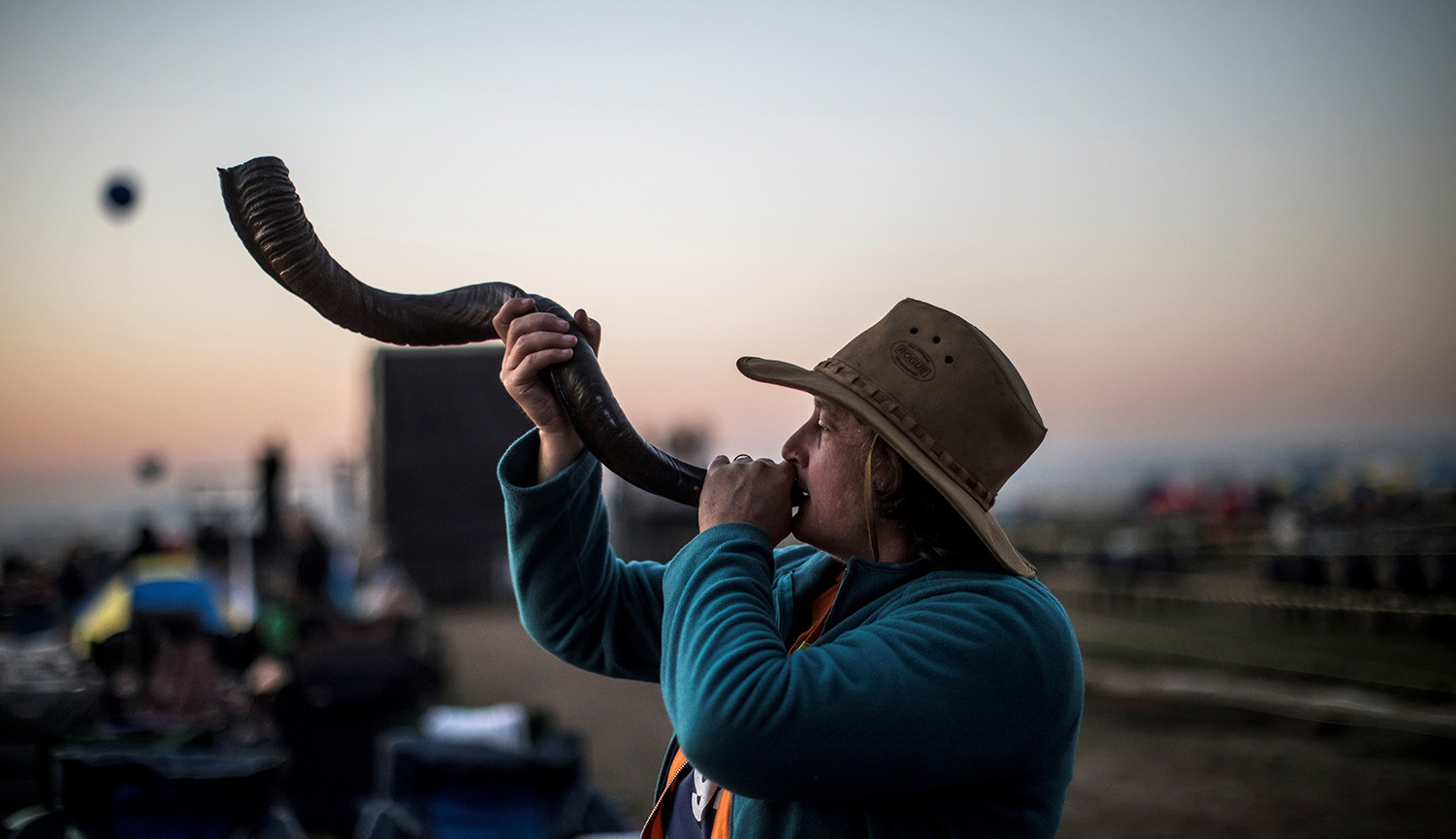 A follower of South African Christian revival evangelist Angus Buchan blows a shofar at an informal airfield outside Pretoria on October 27, 2018. MARCO LONGARI/AFP via Getty Images.

I’m both honored and stimulated by these three responses to my essay on Christians and Jews, responses so different from one another and yet each in different ways illuminating some of its central themes. Let me address each individually, and draw out some common threads as I go.

At the very outset, Rod Dreher—prodigious writer and quintessential Southern raconteur—makes it clear that he isn’t especially interested in addressing the fine points of abstract theological doctrine. And that’s just fine with me; in fact, there is a lot to be said for his position. The close study of theological issues can be wearying and distracting. A grand New Orleans lady friend, the godmother of both our children, forthrightly advised them against the study of theology, warning that “it will just make you mean.” Without naming names, I can say that there is plenty of evidence out there that she knew exactly what she was talking about. “Doctrine divides, and service unites,” said the ecumenical types of the past century. I think Rod Dreher might agree, but might want to substitute the word “story” for service, as we see in his wonderful tale about an African-American clerk working at the dry cleaner where his priest showed up to have his golden-threaded vestments cleaned. It is a story about the power of stories, because it wasn’t just that the clerk was impressed by the exotic God-infused garments, but she knew the passages in the Hebrew Bible that related to the organization of Temple worship.

I’ve lived in the South, and I know that Dreher’s story of the clerk is not at all atypical. One of the delights of teaching in a Southern university was that I could count on a great many of my students to have that same deep, bred-in-the-bone knowledge of biblical stories and tropes that the clerk in St. Francisville had. I never had to think twice about mentioning in class the Tower of Babel, or the binding of Isaac, or the fall of Jericho, or any other similarly iconic biblical stories.

Dreher is right to worry that this state of affairs is not likely to last much longer, and that even settings like rural Louisiana cannot long remain immune to the onrushing, disintegrative, and secularizing force of the ambient culture. The clerk knew her Bible well; but will the same be true of her daughter? Will the daughter be willing to live as an exile in modernity, formed by a religious life that is resistant to assimilation into the norms of our popular culture (an important theme in Dreher’s book The Benedict Option)? Will she be able to understand those stories as her mother’s and grandmother’s generations did, as stories that are remembered because they are a precious resource, which enacts the fundamental moral and spiritual dramas of their lives?

Dreher comes to conclusions that are at least congruent with my own, when he says that “For us Christians, the way forward through the coming darkness to some extent involves turn back to the Land of Israel in the pages of the Hebrew Bible, and reaching out to Jews who keep the ancient covenant in the modern world.” Is it so surprising that many Christians would want to define that relationship, and the relationship of Christians to “the ancient covenant” itself, with great precision?

Of course, that may be just where the trouble begins. Which brings me to Jon Levenson’s enormously generous, learned, and gentle consideration of my ideas on this subject (which are, as he acknowledges, heavily indebted to the scholarship of Gerald McDermott and others). I recommend a close reading of his response as a kind of master class in the genre, theologically informed, alert to the nuances and ambiguities of texts, and razor-sharp in its reasoning. It is a great pleasure to be read with such impeccable care and complete comprehension.

Which is not the same thing as agreement, of course. There are too many points to discuss here, but let’s restrict ourselves to the issue of whether supersessionist theology can be found baked into the language of the New Testament. Levenson is a better New Testament scholar than most Christians, and a far better one than I am, so I enter the lists here with a sense of inadequacy; but here are a few points where the textual argument might be pursued further.

First, on the matter of Sinai’s association with slavery, in contrast to the heavenly Jerusalem’s freedom. Doesn’t Paul speak repeatedly of his reverence for the holiness and majesty of the Law? (Romans 3:31, 7:12). It seems possible to me that Paul is speaking, in the Galatians passage cited (and this is after all the central concern in that epistle more generally), about the question of how Gentiles can become followers of Jesus. Do they need to become Jews through ritual circumcision? Paul is saying no, absolutely not; for that would in fact be slavery to impose that burden. Baptism and faith would be enough to bind the Gentiles to the Jewish messiah. He has no truck with the hyper-Pharisaic messianics.

Second, Peter’s powerful discourse in 1Peter 2:9-10. It might seem to be proclaiming that there is “some other group” (i.e., a New Israel) with a claim to be God’s people, although it’s admittedly nonspecific. But does not the text weigh against that reading, when one considers the next two lines? “Beloved, I urge you as aliens and exiles to abstain from the desires of the flesh that wage war against the soul. Conduct yourselves honorably among the Gentiles”—here I emphasize, but Peter goes on—“so that, though they malign you as evildoers, they may see your honorable deeds and glorify God when he comes to judge.” (1Peter 2:11-12). Don’t these words indicate that the intended audience is an audience of Jews in the Diaspora rather than a new non-Jewish Israel?

Third, the treatment of John the Baptist in two of the three synoptic gospels, and the famous lines, “Do not presume to say to yourselves, ‘We have Abraham as our ancestor,’” as he chastises both the Pharisees and the Sadducees in Matthew’s version, “for I tell you, God is able from these stones to raise up children to Abraham” (Matthew 3:9). But does this amount to a “disparagement of Abrahamic descent”? Or instead is it a criticism of the complacent belief that the mere waving around of an ascriptive status, being a son of Abraham, absent a profound repentance and amendment of life, was enough to avail against the divine wrath coming? Do these words not offer us a glimpse of God’s power and boundless capacity? And was this not a theme in both the Torah (Leviticus 26:41; Deuteronomy 10:16; 30:6) and the prophets (Micah 2:12; Jeremiah 23:3; Joel 3:5; Obadiah 17)?

The other thing that Levenson touches on, albeit briefly and toward the end, is the subject of how a profession of Christian Zionism ought to affect Christians’ view of the actual existing state of Israel. I’m grateful to him for bringing it up. He is quite knowledgeable of the positions taken by “mainline” denominations like the Presbyterian Church in the United States of America (PCUSA), and critical (as I am) of those positions, which bring supersessionism back in a pretty crude and obvious form. But critics of Israel are justified in asking whether a Christian Zionist position binds one to a particular understanding of the state of Israel, or to an unthinking and uncritical support of it. It does not seem to me to do that, not at all. But what it does do is give force to the conviction that Israel has a right to exist in peace. That position doesn’t automatically translate into particular political views, nor is it meant to do so.

Finally, Matthew Bowman writes from the point of view of the Church of Jesus Christ of Latter-day Saints, the Mormon Church. It’s an entirely appropriate subject, for if we are to contend that Christianity cannot be understood apart from Judaism, neither can Mormonism. I completely agree with his admonitions throughout to guard against a homogenizing spirit, a fear that takes us back to Rod Dreher’s clerk and the pressures wrought by an all-pervading culture. But I experience difficulty in assimilating his account of Mormonism to the more general question of Christian Zionism as expressed in the Abrahamic covenant. So, I think, does Bowman.

Mormonism is as American as apple pie. It was a product of the antebellum evangelical religious ferment of upstate New York, the so-called Burned-Over District, so named because the fires of revival burned so often and so fiercely in it. In many respects, Mormonism resembled the restorationist streak of that revivalism, the desire to return the corrupted church to the purity of her apostolic origins. But as Bowman points out, there was more to it than that. Joseph Smith was not merely a restorationist; he was a kind of creative genius when it came to the design of temples, of ritual clothing, and above all of a new Scripture, the Book of Mormon, of which the historian Daniel Walker Howe (not himself a Mormon) has said that “The Book of Mormon should rank among the greatest achievements of American literature.”

Though, of course, the admission of Utah as a state was contingent on the Church’s abandonment of its doctrine of plural (or celestial) marriage. One of the most important elements in the success of the Latter-Day Saints was their attention to strong families and strong communities. Over time, historians have come to view Mormons as not so strange after all, but even—looking across their whole history since the time of Joseph Smith—as in many ways typical of other contemporary Americans. If they remain peculiar today, it’s because they have been effective at passing down to each new generation a serious faith, one that sacralizes marriage and family life as the highest forms of earthly or heavenly existence, which is in many ways (as Howe argues) a doctrinal byproduct of the earlier practice of plural marriage.

The Mormon religion seemed strange and startling to most gentiles (as they call non-Mormons) when it burst on the scene: invoking scriptures besides the Old and New Testaments, engaging in plural marriage, believing in continuing revelation, revering a living prophet, and fleeing repeatedly westward. Yet many people were won over to the cause. It also was a religion that endured some of the worst religious persecution in our nation’s history.

In the end, it seems to me that Bowman is arguing—especially when he says that the Mormon affinity for Israel was “simultaneously imitative and supersessionist”—that Mormonism is and will always be ill-at-ease in its American Zion. Unlike American evangelicals, many of whom do not consider Mormons to be Christians at all, Mormons seem (on the evidence here provided) to be too “evangelistic” for their own good, and unable to recognize necessary boundaries (such as the practice of vicarious baptism, applied to Jews) of a sort that highly conversion-oriented evangelicals have nevertheless come to understand and observe. If that is what he is saying, then it is a shame that this should be so, because there are a great many respects in which affinity for the Jews ought to be very high on the LDS list. And the LDS Church has a remarkable legacy to impart to this nation. That does not mean things have to stay this way. But there is a long way to go.