Many of those who would do away with Israel evince no pre-existing hostility to Jews that I can see. But their motivations are beside the point. 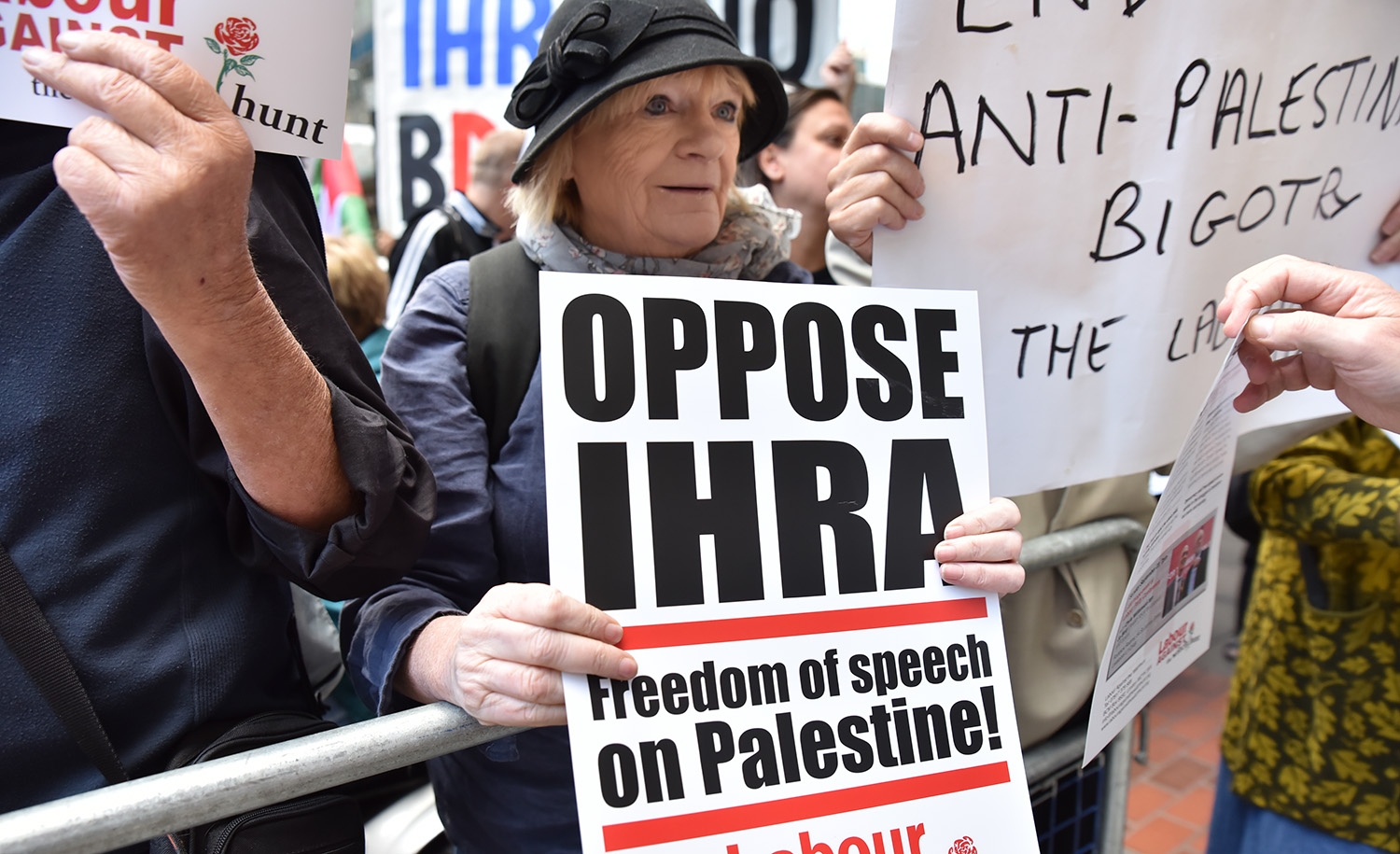 A protest against proposed changes to the IHRA definition of anti-Semitism takes place outside the UK Labor party’s headquarters. Getty.

I thank Michael Walzer and Ben Cohen for their comments and their complimentary words, and Kenneth Marcus for his insights. I hasten to offer Walzer my apology if he feels I did him an injustice by not mentioning his comment in Fathom that he would have embraced the IHRA working definition of anti-Semitism were he based in or focused on the UK rather than the U.S. Had I been criticizing him, I certainly would have felt obliged to do so, but I was not criticizing him. I singled him out for citation because among the many signatories of the Jerusalem Declaration on Anti-Semitism (JDA), he is among those I respect most; also because he is an undoubted friend of Israel’s; and because he offered the most cogent defense of the JDA that I have seen, which was the point on which I quoted him.

Walzer faults me for being “academic” in my criticisms of the JDA, abstracted from the political environment. But the IHRA, which I was defending, has been prominently embedded in the political environment for years, formally embraced by dozens of national governments and hundreds of regional or local governments and non-governmental organizations and institutions, as well as by the secretary-general of the United Nations. It is also, as Ken Marcus reminds us, enshrined in U.S. law through measures taken by both the Obama administration and the Trump administration. And the reason it was so enshrined is that among the myriad extant proposed definitions of anti-Semitism, American officials sought one that was, as Marcus explains, “widely adopted, . . . standardized, . . . used in multiple locations, [and] that has legitimacy from adoption through the democratic process.” (This is why, although I find Ben Cohen’s proposed emendations of the “working definition” eminently cogent, I have misgivings about pursuing them.)

This “working definition,” promulgated in its current form by the International Holocaust Remembrance Alliance five years ago, and in use under different aegis with slight variations for a number of years before that, is suddenly under challenge. The proposed alternative, the Jerusalem Declaration, is lengthier, more complex, and by some lights more elegant. It is sponsored by no official body but rather is presented to the world by a collectivity of . . . academics. This would seem to beg the question: who, exactly, is being “academic”?

But, of course, the JDA is not merely an academic exercise. It is very much a political one. Its purpose is to undermine the IHRA’s working definition. As Walzer puts it: in contrast to the IHRA’s formulation, “the JDA . . . tries to establish a distance between anti-Zionism and anti-Semitism.” Ben Cohen puts the same thought more sharply: “the overriding goal of the JDA . . . is to seal off anti-Zionism from the charge that it is a mutation of anti-Semitism.”

To understand the import of this, it seems we need yet another definition, namely, of Zionism or, more to the point, anti-Zionism. Before 1948, Zionism was the idea held by some Jews that the solution to their plight would be found in a Jewish state. Many Jews had other ideas, ranging from the faith that salvation would be found only in more perfect fulfillment of God’s wishes, to the faith that it would be found in socialist revolution. Most of these Jews—although not all—viewed Zionism as a diversion and were therefore anti-Zionist. Since 1948, there has existed a Jewish state, and the meaning of Zionism has changed. It means simply support for that state, while anti-Zionism means opposition to that state.

What does it mean to be “opposed” to Israel? The question itself sounds odd. There are many people strongly critical of, even scandalized by, the actions of Russia or China or Saudi Arabia. But no one is literally opposed to those countries. Rather, people oppose the actions of their present governments. The last time that I recall a substantial body of reputable opinion being opposed to a country, per se, was at the conclusion of World War II, when, after the cost of some 60 million lives, there were many who wanted Germany dismembered, and even that did not happen apart from the temporary division between east and west that lasted only as long as the cold war.

But there is one country, only one, Israel, whose very existence has been opposed by a large part of the world, an opposition that still smolders now after 73 years. That opposition expresses itself not merely in ongoing diplomatic and economic boycotts and formal discriminatory treatment at the United Nations but also through a history of full-on military invasions as well as a never-ending program of terrorist attacks that every year claim multiple lives. Iran, a much larger country, continues to proclaim its aspiration to wipe Israel from the map, and manifests this aspiration in hundreds of thousands of rockets and missiles emplaced along Israel’s northern and southern borders, topped off by a drive to acquire nuclear weapons and a chortle from its ex-president (regarded as a “moderate”) that because of its small size, Israel is a “one-bomb” country.

In short, anti-Zionism is support for Israel’s disappearance. What would that disappearance mean? It would mean the disappearance from the face of the earth of most of Israel’s Jewish population. The Jerusalem Declaration explicitly encourages the idea of a few left-fringe Israelis that the Jews might live happily in some new Arab-dominated polity. Jews once lived (not so happily) in all the surrounding Arab polities and were driven out either by formal decree or by violence (although a tiny handful remain in Morocco and Tunisia). What would be different here? That the disappearance of Israel would draw the venom from Arab-Jewish relations, and, voilà, after a century of bloodletting, all would be forgiven and forgotten? This region, where daughters and sisters are sometimes still slaughtered for dishonoring their families, is not long on forgiving and forgetting.

Walzer focuses on tactics to persuade people. Perhaps underlying this point is the conviction that some of those who advance positions harmful or dangerous to Israel do not begin with an animus toward Jews. This is a sound point, and I agree that some pro-Israel voices err in suggesting or seeming to suggest otherwise. When Ken Marcus says that “bias against Jews takes the guise of anti-Zionism,” it at least sounds as if he is saying that the bias against Jews is the original motive. Whether he means this or not, I would agree with Walzer that this often is not the case. Many of those who would do away with Israel have no pre-existing hostility to Jews that I can see. They just think Israel’s displacement would be progressive. So what if they feel no hatred?

The same might be said for Stalin. Once the “doctors’ plot” was underway, there was considerable reason to suppose that it would end in the deportation or annihilation of the entire Jewish population of the USSR, a possibility mooted by the dictator’s sudden death. The roots of this potential second Holocaust were to be found not in a mania about Jews, like Hitler’s, but rather in the birth of the state of Israel and the pull that Stalin could see it had on the hearts of Soviet Jews, who dared mob the synagogue where Israel’s first ambassador, Golda Meir, went to worship on the High Holy Days. Stalin harbored common prejudice, but he didn’t hate Jews any more than, so far as we know, he hated the Chechens, Ingush, Crimean Tatars, Kalmyks, or the other nations he deported, causing mass death. Rather he feared they lacked total fealty to his regime.

It was, as far as we can see, the birth of Israel that impelled Stalin to act against Soviet Jews. This points to a critical flaw, a short-sightedness, in the JDA. It opens with the formula: “Anti-Semitism is discrimination, prejudice, hostility, or violence against Jews as Jews.” JDA advocates boast that this core definition is rhetorically cleaner than what is to be found in the IHRA, and at first glance, it appears unexceptionable. But it misses a great deal of the point. Most of the violence against Jews in France, Argentina, and elsewhere in Europe and Latin America, and recently in the U.S. too, is not aimed at Jews as Jews, but rather at Jews as extensions or symbols of Israel. The point isn’t necessarily pre-existing hatred of Jews; it is hatred of Israel, taken out on Jews, seen as the country’s soft underbelly. Is this better?

Advocates of the Palestinian or anti-Israel cause have secured a solid foothold in the “progressive” camp, and there is no space there for Zionists, as everyone who follows this issue understands and as repeated rejections of Jewish groups or symbols from intersectional coalitions attest. Nonetheless, the JDA objects that the IHRA definition places the opposition to anti-Semitism outside the progressive alliance. “The fight against [anti-Semitism] is inseparable from the overall fight against all forms of racial, ethnic, cultural, religious, and gender discrimination,” it says. The problem with this is that much of the anti-Semitism that Jews face comes not from the David Dukes and Richard Spencers but from leaders and activists of these other crusades. Some of these, like feminist/gender-liberation leader Judith Butler, proclaim Hamas and Hizballah, groups that avow the goal of killing Jews, to be part of the progressive coalition. Others, like the celebrated “antiracist” Ibram X. Kendi, advocate racial quotas, a device used historically to discriminate against Jews.

Moreover, I doubt that any signers of the JDA treat anti-Semitism in the same way they treat other forms of bigotry. For example, the JDA spends more words designating various anti-Israel messages “not anti-Semitic” than it spends on identifying those it deems anti-Semitic. I offer a challenge: which of the JDA’s authors or signers has devoted as many words—or any words at all—to arguing that various things are “not racist” that many blacks believe are racist?

The deeper error here is conceiving of anti-Semitism as something aimed primarily at Jewish individuals. In a more meaningful sense, it is hostility aimed at the Jewish people, although of course the suffering is experienced by individuals. That hostility has taken different forms in different ages. Its most important, most lethal, most menacing form today is the effort to destroy or undermine the state of Israel. To abet that effort is to abet anti-Semitism—even if the perpetrator subjectively feels no hate for Jews or even if he is a Jew. Perhaps Walzer is right that it is impolitic or academic to say so, but it is still true.

Anti-Semitic Acts Don't Have to Involve Hatred of Jews
1. Essay

Podcast: Kenneth Marcus on How the IHRA Definition of Anti-Semitism Helps the Government Protect Civil Rights