Does Virtual Seeing Count as Seeing under Jewish Law?

How the Zoom-seder debate opens up on questions of virtual reality. 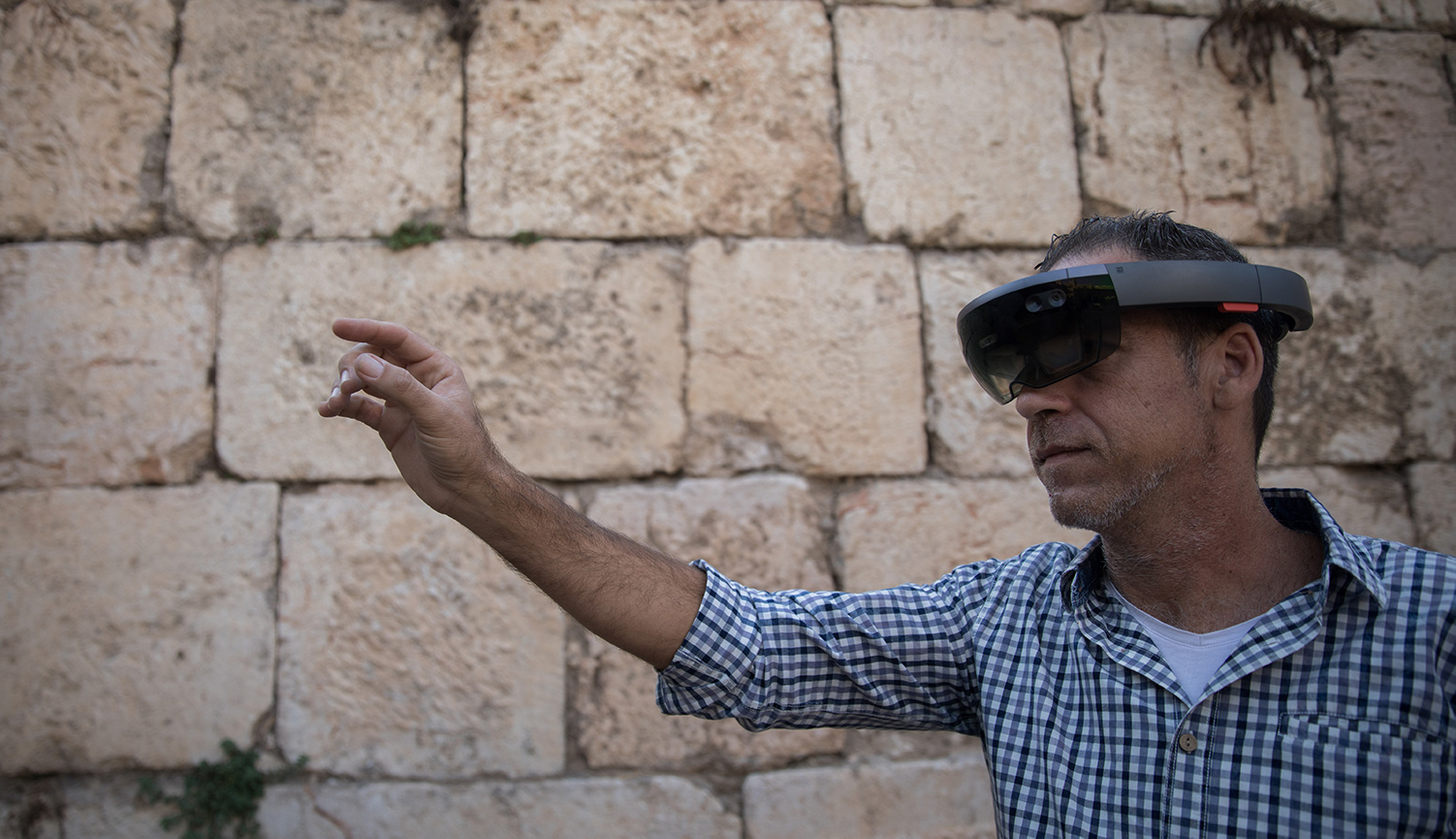 A man looking through augmented reality glasses at the Tower of David Museum in Jerusalem’s Old City on October 17, 2017. Hadas Parush/Flash90.

Response
Shlomo Zuckier
About the author

Chaim Saiman’s characteristically astute essay provides a thorough and cogent accounting of the logic on both sides of the Zoom-seder controversy and, most importantly, explains why it has become such a flash point for debate. While his analysis largely accords with my own account, I would like to call attention to two points that he does not touch upon, which I believe can further our understanding of the subject: the first involves the nature of rabbinic authority, the second the status of virtual reality in Jewish law (halakhah).

Underlying the debate over the Moroccan rabbis’ ruling is a question of rabbinic politics, by which I don’t mean interpersonal squabbles or rabbinic ideas about affairs of state, but the ways in which rabbis sometimes defer to one another and, at other times, agree to disagree. To wit: one of the document’s original signatories later retracted his support, citing “rabbinic unity” as a reason to suppress his original opinion on the topic. This scholar thus signaled that while he might agree in theory with the reasoning permitting the Zoom seder, he did not wish to dissent from the Orthodox consensus.

In some ways, this appeal to “rabbinic unity” is an attempt to uphold the status quo regarding the use of electricity on holidays. As Saiman notes, despite a diversity of rabbinic opinions among both Ashkenazim and Sephardim, a practical consensus emerged in the 1970s that the use of electricity on such days is forbidden. Preventing the proliferation of divergent opinions can help sustain adherence to halakhah: if one Orthodox family uses electricity on the holidays, and its observant neighbors do not, the latter might see little reason not to adopt the more lenient position.

But it’s also likely that the Sephardi community’s abandonment of its own practices, and the rulings of its sages, in response to pressure that came primarily from Ashkenazi rabbis, generated resentment. This was especially the case in Israel, where lived social, political, and economic factors created enough Mizraḥi resentment of the dominant Ashkenazi elite for it to become a potent electoral force. The Association of Rabbis of the Maghreb alludes in its own mission statement to a desire to break free from Ashkenazi halakhic hegemony:

For generations, the scholars of Israel could wisely express their opinions in a respectable and free manner, . . . with the recognition and understanding that opinions do not always coincide. Unfortunately, . . . free expression is often suppressed nowadays. We are convinced that the Sephardi rabbinic approach is still not properly heard in our community.

In other words, the Association is concerned by what it sees as a squashing of traditional Mizraḥi jurisprudence and, it seems, felt that the coronavirus crisis was the perfect time to reassert the older Sephardi approach to the use of electricity on holidays since the exigent circumstances have made this approach more appealing, and perhaps more necessary, than ever. But, counterintuitively, the current situation has brought about a countervailing tendency against leniency.

Among many of the secondary effects of the COVID-19 pandemic has been the increased consolidation of rabbinic decision making into the hands of central bodies and elite halakhists. The phenomenon likely results from a variety of factors, foremost among them a heightened need for communal coordination and the intricate nature of some of the problems, which encourage congregational rabbis to seek the guidance of major rabbinic scholars. But we should also not discount a third factor: that people seeking guidance in moments of crisis trust long-established, widely respected institutions and individuals. Just as many Americans have been paying careful attention to the medical opinions of the Center for Disease Control or Anthony Fauci, observant Jews are turning to national bodies like the Orthodox Union or the Israeli rabbinate, and to such highly regarded senior scholars as Rabbi Herschel Schachter of Yeshiva University and Rabbi Asher Weiss of Israel.

None of this bodes well for an institution that is relatively small, relatively new, and whose raison d’être is to push back against prevailing religious norms. Those authorities promoting unusually lenient opinions face the challenge of being seen as insufficiently serious, a concern already noted in the Talmud, which quotes no less a figure than Rabbi Judah the Nasi—the late-2nd-century-CE redactor of the Mishnah—as expressing concern that, by ruling leniently in a particular scenario, his court will acquire an undesirable reputation for permissiveness (Avodah Zarah 37a). Paradoxically, this concern is heightened in circumstances that undoubtedly call for allowing some practices that might normally be forbidden. The public seeks the necessary leniencies, but craves the assurance that they are warranted. The greater a particular rabbi’s reputation for stringency, the greater his credibility when issuing permissive opinions, especially if they are unusual or unprecedented.

Since Orthodox Judaism has no formal hierarchies and less institutional centralization than even many Protestant denominations, authority rests almost entirely on reputation. The status of such figures as Rabbis Schachter or Weiss doesn’t flow primarily from their institutional affiliations; no rabbinic plebiscite elected them to be supreme decisionmakers. Instead, they have slowly built up reputations over long periods of time as leading experts who can be counted on to rule wisely on difficult questions. Perhaps the clearest account of this process, which involves the accrual of what might be termed rabbinic social capital, was an essay by Chaim Saiman himself, titled “The Market for Gedolim.”

That the Association of Scholars of the Maghreb has not (yet) built up the social capital of such organizations as the Rabbinical Council of America (RCA) might explain, in part, why its opinion on the Zoom seder wasn’t more widely followed, while, for instance, permissive rulings by the RCA regarding the use of similar technology for those suffering from mental illness, did not face such opposition.

Beyond the intricacies of the halakhic process, I’d like to call attention to a particular set of halakhic issues that Chaim Saiman does not delve into. To Saiman, the central issues at play are the legal question of whether the use of electricity qualifies as “work,” and the extra-legal concern that the Sabbath retain its “Shabbosdik,” or Sabbath-like, quality—with the latter often determining which technologies are forbidden on Shabbat and which are permitted. As he persuasively argues, the emerging consensus draws a line between “technologies that are relatively unavoidable, passive, and discreet, and those deliberately engaged for real-time responses that command our attention.”

But there is also the challenge for halakhists of how to understand virtual-reality technology, one that extends far beyond the Zoom seder. This problem has surfaced repeatedly in pandemic-related queries, for instance: can someone in quarantine fulfill the obligation to hear the reading of the Scroll of Esther on the holiday of Purim over videoconference, and is it possible to form a prayer quorum over Zoom when gathering in person in a synagogue is impossible? Schachter ruled leniently in the first case, while the Orthodox consensus has favored stringency in the second. Given the novelty of the technology involved, rabbis have little precedent upon which to draw, but the determinations are less subjective than those about whether a particular activity is Shabbosdik. It’s necessary to decide, for each of these areas of Jewish law, as to whether virtual sight constitutes seeing, virtual sound counts as hearing, virtual attendance qualifies as presence, and virtual word processing meets the qualifications of writing.

Another, far-less publicized Zoom-seder ruling highlights the difficulties posed by these new modes of communication. Ahead of Passover, many Orthodox congregations—like congregations of other denominations—had members who would be conducting seders for the first time, either alone or with equally inexperienced family members, and were desperate for hands-on guidance. Some East Coast synagogues found a creative solution: they allowed for a rabbi on the West Coast to lead a model seder in what, for him, would be late afternoon, but for those in the eastern time zone would be after sunset. The formal instructions for the procedure explained:

Participants will tune in before [the holiday] begins (7:10 pm) and will use one-way audio and video (i.e., pressing “stop” on your video and “mute” on your audio). Remember, please, not to move or adjust your computer/phone in any way once the holiday has begun.

In other words, the participants would follow the seder over video—something normally not allowed on the grounds that it isn’t Shabbosdik—but would not broadcast themselves, or interact with their West Coast companions. This decision is remarkable in its similarity to the Moroccan rabbis’ ruling, which Schachter had rejected. The differences, however, are crucial: those for whom the Zoom call takes place during the holiday are not actively using any technology, and the overall experience differs from that of a typical videoconference.

These differences have both experiential and legal significance. Certainly this doesn’t feel like a usual Zoom interaction, thus separating it somewhat from workday activity. Moreover, there is also a more technical differentiation here. Schachter argues in his written opinion that transmitting visual images from one computer to another constitutes a violation of the prohibition on “writing” on Sabbaths or holidays—a prohibition understood as extending to drawing, painting, and so forth—but having one’s image appear on one’s own computer does not violate this prohibition. According to this line of reasoning, the definition of “writing” depends not on whether a computer is processing an image but on whether one is relaying an image to other parties.

I have already noted the parallel case of the Purim Megillah reading, for which the operative question is whether hearing something live over the Internet is equivalent to hearing something in person for those with no non-virtual option. And the same query applies to seeing: for instance, may one recite the blessing over newly blossoming trees if one only sees them over Zoom? In this instance, Rabbi Schachter, although he permitted listening to the Megillah over Zoom, wrote that he is “doubtful” whether this virtual seeing is sufficient. Of course, Schachter’s opinion is just one of many competing analyses of these issues. The puzzle of how to account for virtual sight, virtual hearing, and virtual presence will continue to challenge rabbinic scholars as these technologies become more sophisticated and further embed themselves into everyday life.

By rejecting the Zoom seder, rabbis did indeed affirm essential characteristics of Shabbat, and they took another step in clarifying how Jews should operate in a world that will, over time, include far more virtual reality. And, in rejecting the Zoom-seder ruling, the Jewish people asserted their own uncoordinated but deeply felt need for established rabbinic authorities empowered to rule on today’s brave new technological questions.

Ruth R. Wisse
May
In Rejecting the Zoom Seder, What Did Orthodox Jews Affirm?
4. Response

Does Virtual Seeing Count as Seeing under Jewish Law?
1. Essay

Why Sephardi and Mizrahi Approaches to Jewish Law Were Friendlier to the Zoom Seder
5. Response