This is a response to In Rejecting the Zoom Seder, What Did Orthodox Jews Affirm?, originally published in Mosaic in May 2020 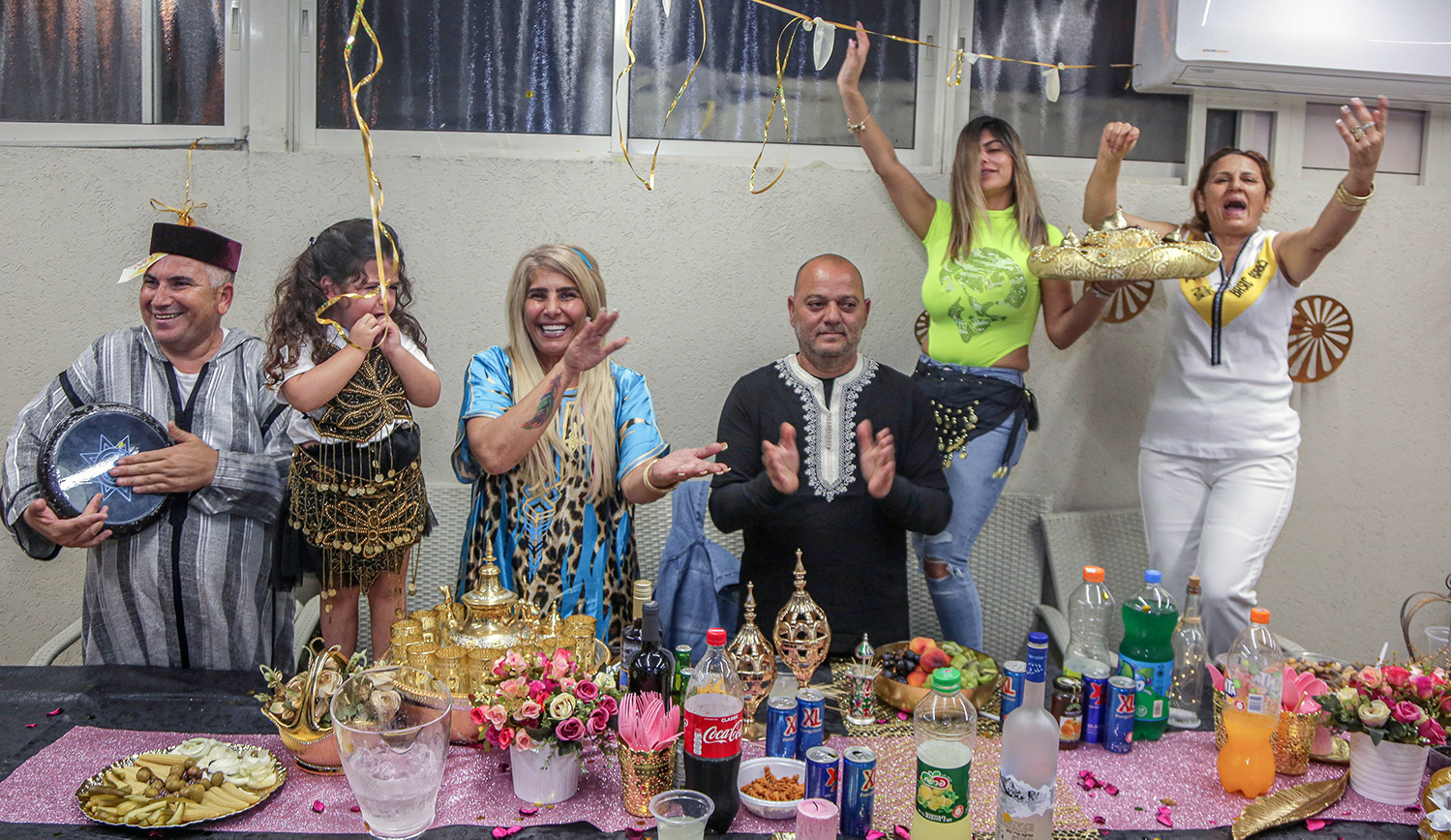 A family celebrating the North African Jewish holiday of Mimouna in the southern Israeli city of Ashkelon on April 15, 2020. Edi Israel/Flash90.

Intellectual charity dictates that we try to understand the Zoom-seder ruling as did the rabbinic scholars who proffered it. Chaim Saiman’s essay, “In Rejecting the Zoom Seder, What Did Orthodox Jews Affirm?,” is a learned and thought-provoking response to that ruling, but because he misses the intra-Sephardi dynamics of Israeli Jewish life that animated the decision, his essay does not comprehend what the members of the Association of Scholars of the Maghreb in the Land of Israel thought they were doing. By grounding their decision in the legitimacy of North African tradition and by assuming that tradition’s relevance for the nation of Israel as a whole, the Zoom-seder ruling is an expression of the cultural confidence of a resurgent community.

To see how this is the case, let’s first look at Saiman’s analysis of the decision-making process. He argues that the “Maghrebi sages” relied on a “rejected lenient opinion” regarding the permissibility of electricity on holidays in order to allow the limited use of Zoom on Passover. In response, Israeli and American rabbis rallied “to protect and strengthen an ideal of the Sabbath’s holiness in the digital age” by standing athwart “our culture’s ubiquitous technology,” and, if not yelling stop, at least trying, “to protect people from the vertiginous speed of modern life itself.”

To begin with, the legal debate regarding the use of electricity on holidays has not simply “been resolved.” While stringent opinions are right now ascendant, the dispute remains alive. To cite one relatively recent example, after devoting a year to studying the subtleties of electricity with local experts, the Moroccan-born former chief rabbi of Netanya, David Ḥayyim Shloush (1920-2016), published a learned 40-page responsum in 2000 affirming the permissibility of electricity on holidays. That ruling reflected both the tenor of the Moroccan halakhic tradition and what is still practiced among North African Jews in Israel today, including some of my neighbors in the Negev town of Ofakim.

But there is a larger problem with Saiman’s analysis. He conflates the American halakhic and cultural environment with the very different reality I see around me in Israel, particularly among the Sephardi and Mizraḥi Israelis who now make up a majority of Israel’s Jewish population. The deeper significance of the Zoom-seder ruling can only be appreciated by seeing it in its Israeli context and by attending to the ideological and cultural struggle occurring just out of his sight.

Saiman contends that the ruling received “wall-to-wall condemnation from prominent Ashkenazi and Sephardi rabbis in Israel and the United States.” But the disapproval was hardly uniform; and, had his analysis been alive to distinctions among the condemnations, Saiman would have seen that while the ruling intended to ease human suffering, it was, in effect, also a maneuver for influence within the Sephardi rabbinate.

The rejection of the Zoom-seder ruling among certain establishment Sephardi rabbis in Israel was remarkable in its intensity. To cite the most egregious example, Shlomo Amar, Israel’s Moroccan-born former Sephardi chief rabbi, not only rejected the ruling, but also directed an ad-hominem smear at one of the signatories, claiming that he was a Reform rabbi. While to a layman this might not appear to be an insult, Amar surely meant it that way. But in point of fact it is simply untrue.

How are we to understand this attack from the center of the Sephardi rabbinic establishment in Israel? Consider a parallel case, namely, Amar’s response to Sharon Shalom’s pioneering work, From Sinai to Ethiopia: The Halakhic and Conceptual World of Ethiopian Jewry. Shalom was born and raised in Ethiopia and brought to Israel at age eleven. Originally ordained by Israel’s chief rabbinate, he studied under two of Israel’s most prominent religious-Zionist rabbinic scholars. In his book, however, Shalom argued for the legitimacy of Ethiopian Jewish halakhic tradition, at least for the older generation of Ethiopian Jews in Israel. Amar’s response? He didn’t merely claim that Shalom’s position was incorrect. He declared the book heretical.

Like Shalom, so too the “Maghrebi sages” merited attack by Amar because they share the belief that halakhic traditions grounded in a continuity of historical memory deserve recognition. Like many other establishment Sephardi rabbis in Israel, Amar, you see, inherited the worldview of Ovadia Yosef (1920-2013), the monumental Sephardi scholar, founder of the Shas political party and former chief rabbi who boldly ruled that non-Ashkenazi Jews in Israel must abandon their historical local traditions and uniformly embrace the rulings of the 16th-century sage Joseph Karo.

The reasons for this decision were complex, but they served the purpose of consolidating a Jewish religious culture, and a framework for halakhic practice, that could be shared across the country. Today, the hegemony of the Sephardi rabbinic establishment in Israel rests on this ideological premise, the very ideological premise that the Zoom-seder ruling calls into question. The Sephardi establishment accordingly perceived a threat to their influence and responded in full force. Interpreting the “universal condemnation” to the ruling through the lens of halakhic analysis and as a response to the threat of modern technology, Chaim Saiman missed the subterranean power struggle at play.

Widening the aperture, the positions of Ovadia Yosef and Shlomo Amar can be seen as religious variations on a principle once commonly referred to as “the nullification of the exile.” Early Zionists aimed to erase Diaspora cultures by immersing new immigrants in an Israeli socio-cultural melting pot, to forget the diasporic customs of their ancestors, and thereby to forge a revolutionary new Israeli identity. Ovadia Yosef likewise aspired to create a halakhic melting pot out of which a pan-Sephardi identity would appear. While the particular dishes might taste different—socialist-secular cholent vs. Sephardi ḥamin—the process of cultural assimilation is analogous.

When viewed from this perspective, the Zoom-seder ruling reflects not the nullification of exile but a resurgent confidence in the integrity of Jewish culture rooted in the exile. And the Zoom seder is surely not unique: in recent years, Israeli culture has been enriched by cultural productions—from literature and music to holidays, museums and yes, even legal rulings—that have rejected the “nullification of the exile” as an ideological paradigm and instead have grounded their activity in a continuity of historical memory.

Erez Bitton was born to Moroccan-Jewish parents in Oran, Algeria, and fled with his family to Israel in 1948. In 2015, he received the prestigious Israel Prize for Hebrew Literature and Poetry. As the critic Eli Hirsch wrote about Bitton in The Sephardi Report, “the negation of the Diaspora . . . served as an ideological principle” in Israeli poetics. As a consequence, “Hebrew poetry . . . was cut off from the Jewish past, floating in a present wherein . . . a deep need to forget [was] presented as . . . the condition of modern man, rather than a purely historical one.” Bitton rejected the negation of the Diaspora as an ideological principle, and instead fashioned a poetics “that would not deny his Arab-Jewish-Moroccan memories.” This connection to exilic historical memory is a source of poetic vitality in Israel, not a weakness.

Similarly, in January 2018, the Israeli Andalusian Orchestra Ashdod (IAOA) was recognized as a national ensemble by Israel’s Ministry of Culture. How did the IAOA begin? When it was founded in 1994, the IAOA’s repertoire rested upon the tradition of bakkashot, “songs of seeking” (in Edwin Serrousi’s felicitous rendering) that Moroccan Jews brought from their points of departure and that, in Israel, they continued to sing each Shabbat from the fall through the spring. The preservation of the bakkashot facilitated, in turn, the larger revival of piyyut (liturgical song) that has enlivened Israeli culture over the past two decades.

Likewise, the post-Passover, North African Mimouna festival is today celebrated as a national holiday in Israel, thanks in large part to its being preserved by Moroccan Jews in the country. Where I live, I helped to establish the Ofakim Archive and Museum. One of the main decisions made by the archive’s steering committee is that instead of beginning with the founding of Ofakim in 1955, the museum will also explore the points of departure of the city’s residents because our community’s cultural depth is grounded in the continuity of its members’ historical memory.

As it is in my desert town, so too throughout the Jewish state. The Association of Scholars of the Maghreb in the Land of Israel issued the Zoom-seder ruling for all the reasons stated therein, but in so doing, they were also resisting the historical forgetfulness imposed by the Israeli rabbinate. The “Maghrebi sages” possess a living tradition and, in this case, they were able to use valid halakhic resources from within that tradition to help people in distress. The Zoom-seder ruling affirms that Jewish culture, the Jewish state, and even Jewish law are replenished by drawing upon the living traditions retrieved through the continuity of historical memory.