Jews are a people that has long battled for ideas. Can any sense of purpose be forged in the absence of theology, or a lifelong engagement with the texts of the Jewish canon? 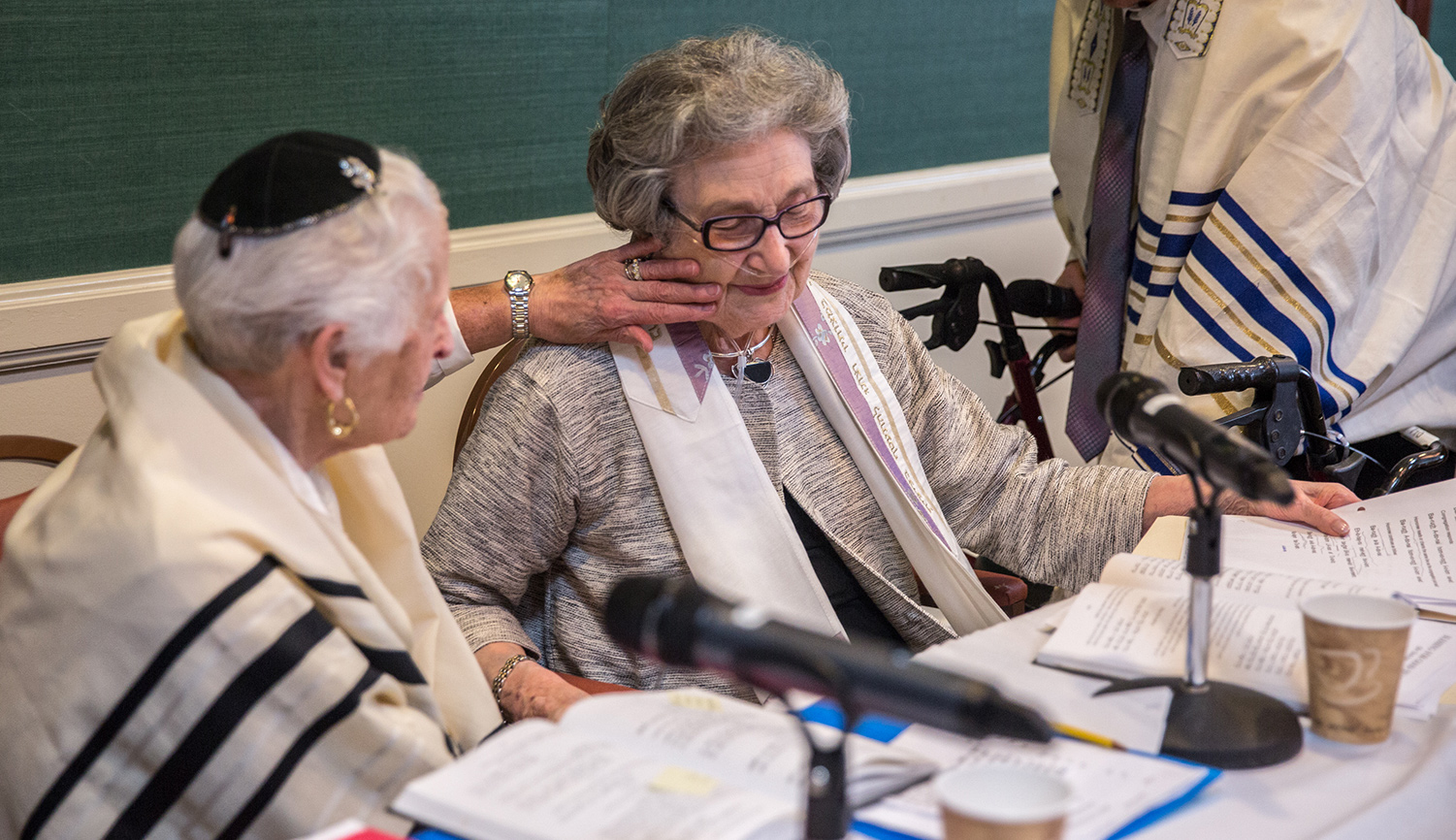 Charlotte Markowitz, 85, congratulates Sy Laufe, 90, after Sy read from the Torah at their bat mitzvah ceremony, at the Five Star Residences in Chevy Chase, Maryland, May 14, 2016. Evelyn Hockstein/For The Washington Post via Getty Images.

Response
Daniel Gordis
About the author

Many years ago, when I was first beginning my doctoral work, among the students in the program were a few members of the Catholic clergy. As we were getting to know each other, one of them caught up with me during a break and said to me, “Tell me about your faith community.”

I remember being stunned by the question. Of all the many ways that I might have defined the liberal Jewish community of which I was then a part, “faith community” was definitely not among them. As successful as many American Jews are, I can think of none who subscribe to what Tara Burton, in her overview of American Christian theologies of success, calls the “prosperity gospel.”

The 80 percent of American Jewry who reside outside of Orthodoxy would not cite fidelity to the “prosperity gospel,” not only because they do not subscribe to its theological tenets, but because they do not subscribe to much by way of positive theology at all. Theology in the liberal Jewish world—in Israel no less than in America—has become more a matter of stating the beliefs one does not hold (that God revealed the Torah on Mount Sinai, that commandments are binding, that God granted the Land of Israel to the Jewish people) than what one does. Most liberal Jews today are not comfortable with theological certitude.

But the implications of the trends in American religion that Burton describes deserve our careful attention. Jews and Christians share what she calls a “cultural inability to contend with the world’s challenges.” I would argue that if Christians are animated by a uniquely American theology, what motivates the Jews of America has been, and remains, something both more worldly and more dangerous: a desire to find in America a safe harbor to protect us from the vagaries and pains of history.

This raises the question of what sense of Jewish purpose can be forged in the absence of theology, and if not from theology, then from a lifelong engagement with the intellectual and moral richness of the texts of the Jewish canon; and it is here that John Moscowitz’s distinction between “identity” and “worldview” is enormously useful. Moscowitz’s claim, as a Reform rabbi, that Reform and Conservative Jewish leaders have adopted “a strategy designed to provide Jews a place and an identity in a land ultimately not their own” is a fascinating explanation for the evasion of history’s complexity to which I referred in my original essay.

Moscowitz is right not to abandon hope, and he is courageous in pointing out what it will take to revitalize the liberal communities which he has long ably served—“thick Jewish ideas which hone the mind, and a liturgy that sings to the heart.” He and I agree that the widespread Jewish liberal notion that Judaism is fundamentally about creating communities committed to serving the world (a noble notion, obviously, but surely not a uniquely Jewish one) is utterly unsustainable. That is why I focused on text, calendar, and liturgy—classic repositories of Jewish distinctiveness. Yet though Moscowitz and I agree on the diagnosis and the prescription, I don’t know that we would concur about how compliant we can expect the patient to be.

On the more technical side, I did not claim that American Jews are “hapless.” Quite the contrary. My entire point was that American Jews—confident, secure and intent on staying that way—are anything but hapless. They are perhaps the most fortunate and best situated of any Diaspora community in Jewish history.

Carmy also casts doubt on certain pieces of evidence I adduced, including the Jewish Publication Society’s book of jokes during the Holocaust, wondering if I make too much of it. I believe I do not. Solomon Grayzel, the society’s editor in chief in 1941 wrote, “I think the time has come when a responsible organization like ours must call a halt to terrorizing the Jewish population in this country—the last Jewish population which still retains its self-confidence [italics added].” The decision to publish Let Laughter Ring was hardly “jejune” as Carmy puts it. Again, quite the contrary. Even as he was publishing Let Laughter Ring, Grayzel declined to publish an eyewitness account of Dachau and Buchenwald entitled The Massacre of Jews in Vienna. That decision, too, could hardly be called “jejune.”

It is towards the conclusion of his response that Carmy reveals his most fundamental discomfort with what I wrote. I do not espouse a Jewish version of the clear theological stances of which Tara Burton so ably writes. Says Carmy, “If it is foolish and debilitating to downplay the experience of Jewish particularity and the suffering that accompanies it, it is perhaps even more dangerous to appeal to that record and that liturgy while turning a blind eye to the reality of sin, betrayal of God, and the duty and privilege of repentance.”

That may be, and I have indeed been criticized before for leaving God out of my writing about Israel and Zionism. I suppose that my consistent sidestepping of theology when writing about Zionism stems from my personal discomfort with the kind of certainty that theological thinking often mandates. He and I could participate in the same worship service in complete comfort. If after services, though, we chatted over kiddush, I think we would express our reasons for being there in very different terms. But what matters more than my comfort or his is the fact that I believe that most American Jews who are searching for meaning and are open to finding it in Jewish tradition would find Carmy’s theological certainty off-putting. I believe that vocabulary and tone make it harder to draw people closer to the Jewish tradition.

Carmy also worries that I have elevated nationalism to the level of God. My worldview, he avers, “risks blurring the absolute line between the service of God and the promotion of the nation as an absolute value.” One senses more than a whiff of the very same aversion to nationalism that animates ḥaredi rejection of Israel today, even if Carmy doesn’t subscribe to their overt anti-Zionism. I was not equating the world of religion and espousal of Zionism; but by simply pointing out that while traditional Jewish life promotes resilience, so, too, does Zionism, I apparently triggered a deeper concern.

Among the many things that I admire about Bari Weiss’s characteristically excellent response is her wondering—rather than saying—what I mean, hoping that I have not given up on American Judaism. I have not—not in the least—but like Weiss, I too am deeply worried. If she and I disagree here, it is only with regard to her stated optimism.

Is it possible that the young generation to which Weiss refers will kindle the flickering flames of Jewish passion and purpose? Perhaps. But I would be more confident about that prospect if I knew what animated this younger generation. Cecil Roth, a British giant among Jewish historians, wrote that what was significant about the Maccabean Revolt was that it was the first time a nation had gone to war over an idea. We are, indeed, a people that has long battled for ideas: monotheism, the Sabbath, universal literacy and education, the sanctity of debate and of preserving those ideas that most challenge us, the egalitarian impulse in the Torah, a love affair with a land, the abiding significance of the nation-state. And much, much more.

What Jewish idea would the young Jews in whom Weiss takes comfort say they are fighting for? I suspect that Weiss is more confident than am I that they would have an answer. I have my doubts, and I would love to be wrong.

Yet if my doubts prove not to have been wrong, and if we are, as I fear may be the case, witnessing the beginning of the decline of a great Jewish Diaspora community, I will be heartbroken but not bereft: heartbroken because the world in which I was raised and educated stood for so much that was good, and is still poised to do and say things of great Jewish import.

But not bereft, because taḥanun’s heart-wrenching cry will comfort me, as it reminds me that my people has been here before. Though often it was not clear how it would happen, we have always risen on a new day to battle for ideas uniquely our own, derived from the texts and way of life that has shaped us for millennia.

We will do that again. Of that, I have no doubt.