The Opportunity of the Pandemic for Liberal Synagogues

Meaning is sought outside of America’s houses of worship by the many young who are “spiritual but not religious.” We liberal Jews must have something to say to these seekers. 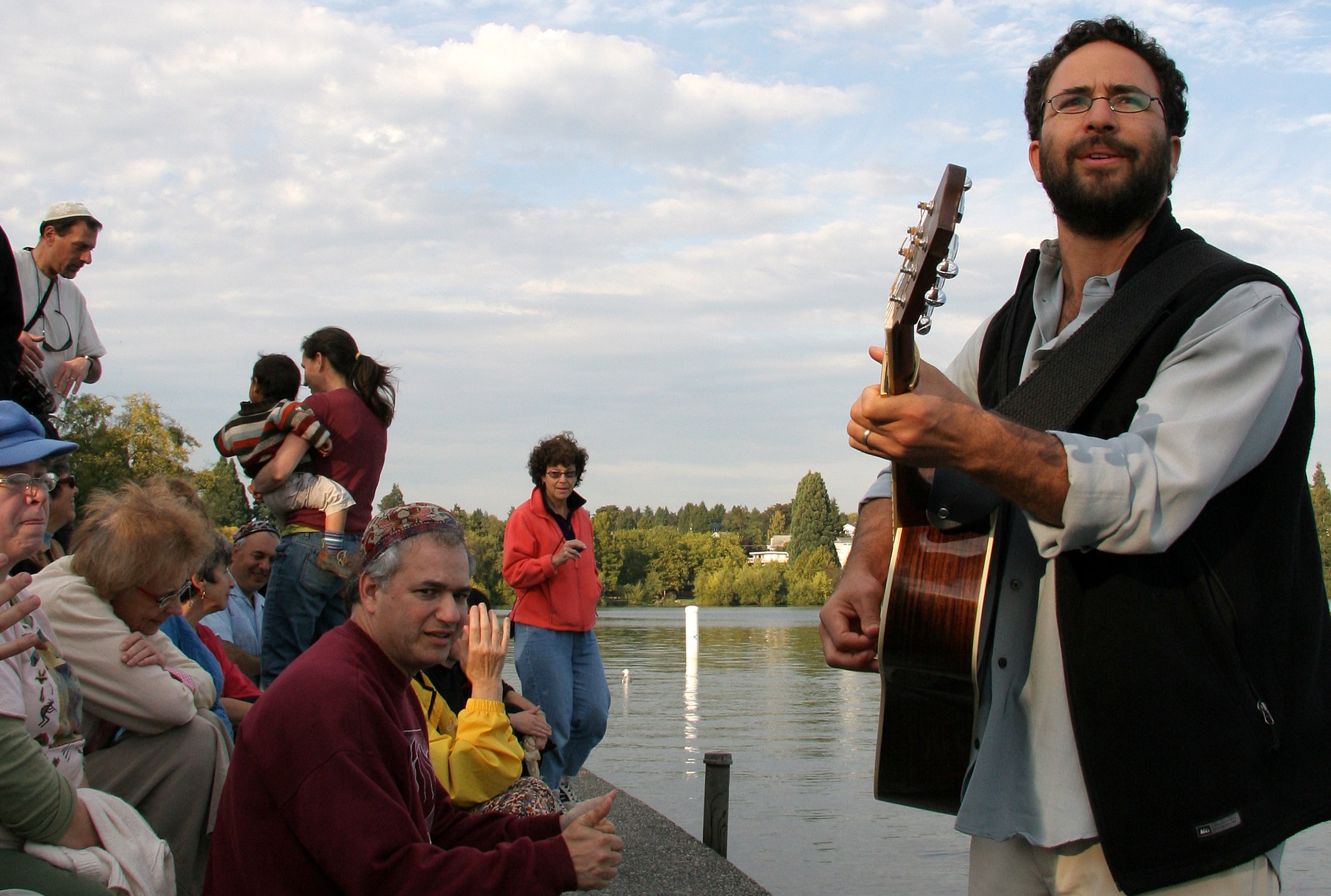 Worshipers from Congregation Eitz Or in Seattle in 2008. Joe King/flickr.

Response
Josh Beraha
About the author


Josh Beraha is associate rabbi at Temple Micah and one of the leaders of the Micah Storefront Project, both in Washington, D.C.

The historian of religion Jaroslav Pelikan wrote that we have a choice either to be “conscious participants” in tradition or its “unconscious victims.” The pandemic has demonstrated that American Jews are without a doubt the former. As Jack Wertheimer so robustly shows, to look at what synagogues across the country have done in the past year is to see the verve and vivacity of American Judaism. Not only have we seen successful efforts at maintaining our communities, but in many cases they are stronger. More people are tuning in for worship and learning, and a newfound love and appreciation for Jewish belonging seems to have awoken in people overnight. One year into this mess, that love has yet to abate. But will it?

As the worst of the current health emergency seems to be behind us, will this enthusiasm for Jewish life continue? Or, to put it cynically, for the members of liberal Jewish denominations, where will Friday-night services and Torah classes fall on a list of priorities when restaurants and theaters reopen and we can once again eat in each other’s homes?

Above all, 2020 was a year of uncertainty. Only rarely in recent history have our communities lived through a time where so much was unknown. The circumstances forced us to contend with our mortality, with how we care for others, and with the consequences of living in an interconnected, globalized world. We wondered how to create engaging online worship experiences, and how to keep our communities safe but connected; how to care for those in isolation, and how to mark the death of loved ones properly. We also asked questions of more limited scope, such as: could a deeply flawed religious school be transformed into a vibrant online experience? And if so, how? Prior to last year, the national Jewish conversation at times felt stale, repetitive, and slow, but the pandemic gave it a much-needed jump start, and so it is alive again, with new questions, and a newly inspired and ready-to-listen audience.

Wertheimer captures many of the urgent questions. How can we resist the trends that put religion in the same category as entertainment? Will our consumerist mentality encroach on our religious institutions, and how can we guard against such encroachment? Will the established mega-synagogues that have turned their sanctuaries into television studios unintentionally cause the closing of small-town synagogues because the latter’s erstwhile members can now stream the former’s services online, and sometimes for free?

Though questions abound, it is precisely these new questions, and the conversations they encourage, that should bring us hope for the American Jewish future. For too long, we’ve been stuck trying to answer the same questions, while making little progress at finding answers: how to curb intermarriage, what to do about young Jews and their lack of connection to Israel, what can stop the decline in synagogue membership. These communal dilemmas remain as important as ever, but they were formerly addressed as conversations for insiders, and were conducted with scant attention to the experiences of the average American Jew. Meanwhile, nearly half of all Americans today are part of what the observer Tara Isabella Burton calls “remixed culture.” When spiritual needs are unmet by inflexible institutions, the Remixed, she says, “make use of the geographical irrelevancy of the Internet to foster digital, rather than physical, communal spaces.” They find likeminded people online and build communities that suit them.

Now that the pandemic has cast us into the wilderness, we should seize upon the opportunity to continue, and even to push for, more radical innovation in Jewish life. Philanthropic foundations have already realized this; recently the Aligned Grant Program solicited proposals for grants of up to $10 million aimed at seizing “this unique moment to reimagine, renew, and reset Jewish communities for the future.” Though neighborhood synagogues are usually not the recipients of such funds, one could certainly imagine these moneys going directly to congregations in the future if their rabbis push the boundaries of what a synagogue is. A year ago synagogues closed their doors. It’s time we expand beyond our walls.

Sixty years ago, the sociologist Marshall Sklare called the American synagogue an “ethnic church.” And 30 years ago, my own teacher, Rabbi Lawrence Hoffman, declared that the challenge for American Jews would be to transform the synagogue from an “ethnic fortress to a spiritual center.” What Rabbi Hoffman meant, taking Sklare’s cue, was that the synagogue had evolved into a fortress to safeguard what was inside and to shield Judaism, and Jewishness, from the dangers of assimilation. This posture yielded a Judaism that was often remote from people’s everyday experience. It was a visited Judaism, not, for most Jews, an integrated part of their lives.

Nevertheless, the synagogue as ethnic fortress survived by providing life-cycle rituals and appealing to Jewish nostalgia. Synagogues looked inward, and concerned themselves with bringing people through the door in order to keep the lights on. Some synagogues thrived, but most merely survived.

What the pandemic did—quicker than any programmatic intervention ever could—was to accelerate the move from “ethnic fortress” to “spiritual center.” Yes, it was convenient for people to tune in from home. But this time, with so much public anxiety in the air, the relevance of our ancient past was seized upon by clergy and Jewish professionals, and most importantly, was embraced by people who weren’t aware of the richness of Jewish traditions. This is a once-in-a-generation opportunity if—and only if—our community can wisely answer this question: will we use this disruption in Jewish life to bring about a new synagogue model, whose ease of access and relevance can bring our people roaring into the next decades, fueled by a reenergized, forward-looking theology? Or will we let the opportunity slip through our fingers, and condemn our children to a world with diminished Jewish options, and among those, a liberal Judaism whose relevance will continue to recede?

The synagogue of the future must address questions about what it means to live with dignity and honor. It must lead people to contemplate the sources of happiness, fulfillment, and significance. They will be places of rigorous debate, and profound rituals. They will defend the idea—to borrow from Alan Mittleman—that the human person is a “mysteriously free, rational being capable of knowing and responding to the moral law.” To quote Rabbi Hoffman again, synagogues must become “communities of profundity.” But most of all, they must be rooted in the lived experience of the liberal, modern, American Jew.

In making the Internet an ever-greater part of our religious lives, we ought to remember the words of that great skeptic of technological progress, Neil Postman, who warned that “it is not always clear, at least in the early stages of a technology’s intrusion into a culture, who will gain most by it and who will lose most. This is because the changes wrought by technology are subtle if not downright mysterious.” Accordingly, as we begin to understand how computers and livestreaming can be used to enrich our communities, we should do so “with our eyes wide open” to their dangers, as Postman says, and learn to be “loving resistance fighters.”

As with all technological change—from the advent of writing to the invention of the printing press—there will be clear drawbacks to the use of computers in spaces that used to be called sacred exactly because of their absence of technological distraction. Postman understood this, too. “A preacher who confines himself to considering how a medium can increase his audience will miss the significant question: in what sense do new media alter what is meant by religion, by church, even by God?” So, with our eyes open to the inevitable pitfalls, we rabbis must not be frightened into paralysis by those pitfalls when we have before us an opportunity to break down the barriers of participation in Jewish life and to aim at stirring a new religious sensibility by using technology to speak directly to people’s hearts and souls.

As for the question of whether America still needs thousands of synagogues in the age of virtual prayer, I think of Roger Scruton’s observation that “the presence of the subject in the face is yet more evident in the eyes.” To meet over Zoom is to see someone’s face, but not his eyes. Local synagogues will endure because when a loved one dies, or a meal is needed, or any true meeting is required, the mega-synagogue will not send help. By investing so much over the last year in digital tools that try to facilitate community online, we’ve actually learned that neighbors—real ones, who live alongside us—matter. The presence of real people to talk to, to interact with my children, matter. As Martin Buber said, “All real life is meeting.” To this I’ll add: meeting face to face, eye to eye.

A year after the shuttering of our synagogues’ doors, we can’t help but wonder if American Jews will look back with nostalgia upon pre-pandemic Judaism, the way they look at the Judaism of the shtetl. But I hope instead they will recognize that the well-worn path to a life of value, long trod by our ancestors and passed down through the generations, needs to be re-charted if it is to be passed on to yet another generation. We must find new ways to ensure that Judaism flows outward toward people and the lives they live. And rabbis must entangle themselves in the community beyond the synagogue walls, and dare I say, share the gift of Torah with anyone who desires. Lastly, we must not forget that today meaning and purpose is sought outside of America’s houses of worship by the many young who are “spiritual but not religious.” We have something to say to these seekers, and the reimagined synagogue that the pandemic may yet bring into being ought to address itself to them, whether they are Jewish or not.

The Opportunity of the Pandemic for Liberal Synagogues
1. Essay

How Will Synagogues Survive?
2. Response

Lessons for Streaming Synagogues from the Evangelical Experience
3. Response

What Happened in Lakewood
5. Response