This is a response to Intermarriage: Can Anything Be Done?, originally published in Mosaic in September 2013 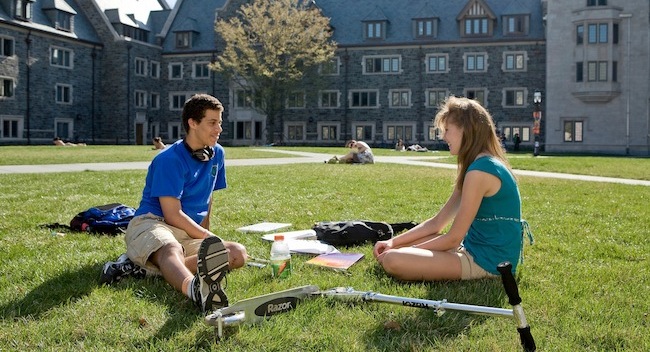 I have high hopes that Jack Wertheimer’s ambitious and insightful essay will reach those Jews who are now, or soon will be, contemplating marriage. High hopes, but I fear misplaced hopes. As a college senior, I am one of those young Jews, and I want to offer not an excuse but an explanation for why some of us may be shirking what Wertheimer would call our responsibility to ensure the Jewish future.

On today’s university campuses, Jewish students are increasingly being offered two divergent versions of Jewish life. One is recognizably traditionalist; in denominational terms, it loosely resembles modern-Orthodox or Conservative Judaism. No doctrinal or ritual demands are made as a condition of involvement, and varying degrees and levels of adherence are embraced (for instance, when it comes to separate seating of the sexes at prayer). Nevertheless, this grouping is defined by the great pride it takes in the traditional principles and practices of Judaism.

The other form, loosely resembling what has come to be called Jewish Renewal, acknowledges that the traditional culture of Judaism is important and needs to be retained but believes that Jewish religious practices must be consciously and deliberately reinvented. The old way of doing things, it is said, is driving away members of the Jewish community—a premise accepted by many American Jews. This means that outmoded and esoteric bits must be removed and replaced by newer and more alluring ones. Interestingly, secular or “cultural” Judaism, which used to be the alternative to the traditionalist brand of Jewish life, is less of a presence on campus. In its stead, students who adhere to this second kind of Jewish life seem to find comfort and coherence in combining what Wertheimer refers to as a “strong residual emotion for the religion of [one’s] birth” with an emphasis on reinvention.

On my campus, although the divide between the two forms of Judaism is significant, they get along quite well together. Students seldom partake exclusively of one or the other, but instead mix easily and often.

What does any of this have to do with marriage? As Sylvia Barack Fishman notes in her response to Wertheimer’s essay, the formation of strong Jewish communities in colleges creates fertile soil for the growth of relationships. If there is no place for Jewish life, young Jews will not meet each other on any consistent basis. But what is the aim of these places, and what goes on in them? For the most part, they promote Jewish learning, encourage and fund Shabbat activities, provide facilities for prayer groups (minyanim), and connect students who are enrolled in well-attended courses on Bible and Jewish philosophy. And yet, in the landscape of Jewish life on campus, with its excellent and accommodating spaces, the focus is more on the building of community than on personal or moral growth—the kind of growth that a romantic relationship with another Jew is perhaps uniquely capable of fostering.

We shouldn’t be surprised at this state of affairs. In the effort to rescue Jewish life by bringing young Jews together, traditionalists shrink from imposing personal expectations lest they push students farther away. In the same effort, “renewers” put every facet of Jewish life on the negotiating table. Neither party draws any connection between the pursuit of Jewish community, let alone Jewish learning, and the cultivation of Jewish character by means of Jewish relationships. In the kibbutz-like atmosphere of campus Jewish communities, young Jews are subtly encouraged to see each other as friends, as cousins, as academics, but very rarely as potential life partners. Both Wertheimer and Fishman touch fleetingly on this issue, but to my mind, given the near-universality among young American Jews of a four-year college experience, it is key.

I hardly mean to suggest that marrying a Jew guarantees a healthy and happy Jewish life—or that marrying a non-Jew necessarily makes such a life impossible. (Many are the anecdotes about the non-Jewish partner in an interreligious relationship developing an infectious passion for Judaism that ends by nudging the Jewish partner back toward Judaism.) But we cannot ignore that endogamy makes it easier to achieve a fulfilling Jewish life—a life of learning, ritual observance, strong family affiliations, love of the Jewish people and even of the divine.

For many Jews, including me, it has become alien to think of marriage in such terms, and—this is the point—no one is urging us to do so. That is not the case with other groups in Western society. In Catholicism, to take only one example, marriage has been a sacrament for nearly 2,000 years; in some sense, one cannot live a full lay Catholic life if unmarried. Is Judaism really so different in this regard? Is endogamy only about making more Jews, or is it also about making better Jews?

Realistically, I hold out little hope that the American Jewish community as a whole will coalesce behind endogamy as an instrument of Jewish flourishing—or, for that matter, behind Jewish flourishing, period. According to a recent report in the New York Times, some synagogues, seeking to “reinvent” bar and bat mitzvahs, intend to “shift from prayer to social action,” and are even considering getting rid of Torah-reading altogether. It’s unclear that any specifically Jewish content will remain in such a regimen (aside from tikkun olam, a moral principle roughly equivalent to “social action” and found in many another body of thought besides Judaism). The result can only be a further widening of the gap between Jewish education—the heart of Jewish flourishing—and the notion of Jewish marriage as a primary path toward that grand goal.

If this is true—and mind, these are only the thoughts of one never-been-married Jew on one college campus—then today’s extraordinarily fortunate young Jews, whose appetite for learning and community has been so richly indulged, have ironically been robbed of the challenge and the opportunity to flourish fully as Jews. Is there really nothing that can be done about this situation, short of importing a flock of Yentes (after the matchmaker in Fiddler on the Roof)? Pending their deus-ex-machina arrival, we might start by overcoming our qualms and reviving the tradition of Jewish learning through and alongside the avenue of Jewish romance, in the process imparting to our young the joy of discovering an apple tree among the trees of the forest, a lily among the thorns. (Song of Songs 2:3, 2:2)

Benjamin Silver, a student at the University of Chicago, will be graduating in June 2014.