This is a response to Evangelicals and Israel, originally published in Mosaic in October 2013 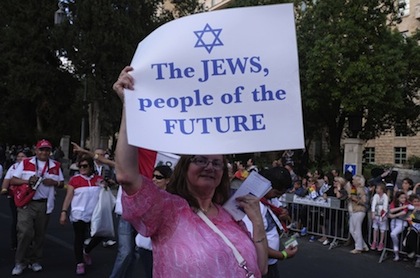 Thousands of evangelicals from around the world celebrate at the annual Sukkot parade in Jerusalem, September 24, 2013. © Eddie Gerald/Demotix/Corbis.

Robert Nicholson’s “Evangelicals and Israel” should worry any Jewish supporter of Israel, for three major reasons.

The first is that ingratitude is a great sin—though one with deep roots in Jewish history. The story of the Jews in the Bible is replete with incidents of their ingratitude to God for His gifts to them: incidents that just as repeatedly merit and receive punishment. Here we go again: today’s American Jews are spectacularly ungrateful toward a huge community of evangelicals whose enthusiasm for Israel may become critical to its very survival and certainly to America’s continuing support of the Jewish state. The American Jewish population is dwindling, from a height of nearly 4 percent of the U.S. population to under 2 percent now. As Nicholson explains, Christian support, already enormously important, will become only more so.

The second reason for worry is the anti-Israel trend in the evangelical world: as Nicholson puts it, evangelical support for Israel may already have peaked. This shouldn’t come as a surprise: powerful currents in American culture, including the control of most university faculties (even in some evangelical colleges) and of the mass media by the voices of the liberal Left, are pushing young evangelicals away from the beliefs of their parents. Yet few American Jews know much about the evangelical community, let alone about the swings Nicholson lists and analyzes. Most will never have heard of the Palestinian Christian groups whose anti-Israel activities he describes, and are unaware of their growing influence among American evangelicals. For this reason alone, his article, providing new and valuable information, is an important wake-up call.

And then there is the third reason: namely, the American Jewish mainstream’s continuing resistance to close collaboration with evangelicals. I differ with Nicholson’s attribution of this resistance to the legacy of Christian anti-Semitism; I think it is the product of politics. We see this in the voting patterns of American Jews, who in most elections overwhelmingly cast their ballots for liberal candidates regardless of those candidates’ position on Israel. That the rabbi of a leading Conservative synagogue in the Washington, DC suburbs has just resigned his pulpit to head the National Jewish Democratic Council is but one instance of the interpenetration of religion and liberal politics in so much of the non-Orthodox Jewish world.

By contrast, when it comes to the evangelicals, liberal Jewish leaders rank their disagreements with this community on issues like “gay marriage” or “abortion rights” as of greater weight than the need to seek and cement alliances in support of Israel. Indeed, they remain far more comfortable consorting with liberal “mainline” Protestant groups, with whom they share a common political outlook, despite the latter’s pervasive and deep hostility to the Jewish state. Which leads one to wonder: if evangelicals themselves become more liberal—as Nicholson and mainstream evangelical leaders fear—will liberal Jews find them more to their taste? That would certainly be an ironic outcome. But what if the evangelicals, in becoming politically and culturally more liberal, also adopt the Protestant establishment’s anti-Israel prejudice? Then the irony will turn dark indeed. Jews will find that their newfound cooperation with this formerly scorned community has been bought at the price of support for Israel.

For Jewish supporters of Israel, in short, there are more than enough reasons to worry. The question is, how should the Jewish community react? In particular, what can be done to help reinforce and to sustain the still powerful pro-Israel activism of millions of evangelical Christians?

Nicholson’s basic advice is very sound: provide information, and provide opportunities. Information: for example, films that can be shown in churches and that are as well made as the anti-Israel With God on Our Side, whose pernicious propaganda needs to be counteracted. Opportunities: preeminently, visits to Israel.

Many of the vast numbers of evangelicals who tour Israel every year are already fully committed supporters; but, as Nicholson notes, they tend to be older and they are likely to visit only biblical sites—ignoring modern Israel, and never gaining the insights or the experiences that would allow them to understand the errors, distortions, and lies coming from anti-Israel Palestinian Christian groups. The government of Israel should make an effort to provide each such group with something more: a chance to get beyond Bethlehem and Nazareth and see how Israel confronts the security and political challenges that it faces. Christian tourism must be understood as far more than a business opportunity.

Both of these efforts should concentrate even more intensively on evangelical youth. Where Israel is concerned, a Birthright-like program is, as Nicholson suggests, part of the answer; I would start by targeting student-body presidents from evangelical colleges and others whose activities suggest they have the makings of future leaders. Young pastors are another obvious target group. Organizations like Pastor John Hagee’s Christians United for Israel and the International Fellowship of Christians and Jews, led by Rabbi Yechiel Eckstein, should be partners in this effort and can help identify candidates.

I am not sanguine about the willingness of most American Jews to understand and express gratitude for evangelical support, or to seek more and closer cooperation with evangelicals in Israel’s cause. Nor am I sanguine about the willingness of most Jews to reach out to individual evangelicals or to their churches (another path suggested by Nicholson). But that doesn’t mean the effort is doomed. It may fail at one level but succeed on a much larger scale if a few key Jewish organizations—with adequate funding—step up to the plate.

Elliott Abrams is a senior fellow for Middle Eastern studies at the Council on Foreign Relations, where he maintains a blog, Pressure Points. He is the author of Faith or Fear: How Jews Can Survive in a Christian America and, most recently, Tested by Zion: The Bush Administration and the Israeli-Palestinian Conflict.