Why Israel is the foundation upon which the house of Jewish culture can be most safely built. 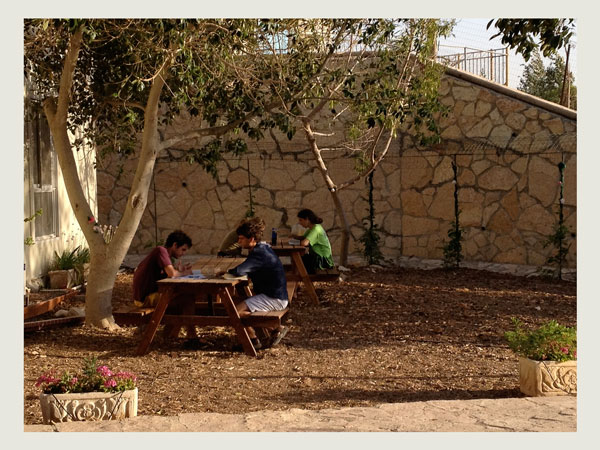 Hillel Halkin’s Letters to an American Jewish Friend first came into my hands serendipitously. I knew of its existence in English but was unaware of a Hebrew translation. Then, on one of our regular visits with my wife’s parents at Kibbutz Maoz Haim in the Beit Shean valley, I found myself rooting through sacks of dusty books that the kibbutz library was offloading before sending them the way of all paper. There, among other finds, it lay—and in my native tongue.

Walking back to my in-laws’ house under the scorching sun, I opened to the first page, the second, third, fourth, and finished inhaling the rest in the cooling mercy of their air conditioner. I was struck not only by Halkin’s abundant intelligence but also by his intellectual honesty and courage. Of course, I already agreed with much of his thesis concerning the nature and meaning of Judaism after the establishment of the Jewish state. For his American Jewish readers, his analysis of their condition must have struck like an arrow.

Well established by now are Halkin’s all too accurate forecasts of the demographic decline of American Jewry. But that’s the least of it. The question is: why. And the answer, from my perspective, is related to a motif that runs like a scarlet thread through his book: the artificiality of Jewish identity in the Diaspora versus the natural identity of Jewish life in Israel. As a native Israeli, I hope I can contribute something to this trans-Atlantic conversation.

For Jews living outside Israel, especially in the liberal West, it can be hard to grasp the extent to which Judaism in Israel is predominantly a religion of the people.

I recall a Friday afternoon in the northern town of Rosh Pina. From the karaoke machine at a nearby swimming pool, Mizrahi music with a hip-hop beat reverberates incessantly. Suddenly, the yowlings of the immodestly dressed Jewish girls and their male counterparts in swimsuits and flip-flops are interrupted by an announcement crackling over the public-address system: “Shabbat begins soon!” Silence falls. Soon, showered, in white blouses, kippot out of pockets and on heads, they are making their way to synagogue, secular rock lyrics yielding to traditional sacred melodies.

Ask most of these pious young shul-goers: who is your favorite Jewish philosopher? How can Torah and science be reconciled? Do you think that choosing Judaism is an existential decision? They will think you insane.

Is there a chance you will marry a Gentile? “No way.”

Would you risk your life to fight for the Jewish people? “Absolutely.”

Will you bequeath all this to your children? “A hundred percent.”

Are you proud to be a Jew? “With all my heart.”

Are all Jews brothers? “Yes.”

I propose that, in the liberal Diaspora, those baffled or silenced by the first set of questions would likely answer the second set equivocally or in the negative. Why? Because in the Diaspora, Jewish identity, if one is to engrave it on one’s heart and, especially, pass it on to the next generation, demands a more reflective effort.

In brief, what is acquired naturally for the Israeli is acquired artificially for the Jew in the Diaspora. Which is not to deny that the artificial can be beautiful, fascinating, hugely impressive. But natural? For the American Jew, English is natural. Baseball is natural. Such a Jew does not need to pursue a degree in colonial history in order to celebrate Thanksgiving. Even if he is no expert in philosophy or law, concepts like “freedom,” “the Constitution,” and “self-made man” reverberate in his soul.

His Judaism, by contrast, far from being imparted through the air of his environment, comes to him out of a special precinct created and protected by his coreligionists, who form a religious and cultural (and still in some ways ethnic) minority. The challenge facing the serious Jew-in-exile is tremendous: to choose, every day, the deviant over the natural and the normal. When he fails, he assimilates into his surroundings.

Such, writ large, is the story of Judaism in the reality of contemporary America, where the combination of diluted religious faith and the decline of anti-Semitism has long propelled a natural process of assimilation, leading in turn to the demographic facts recorded in the recent Pew Report. In the face of that reality, Jews who intend both to lead a natural national life and to maintain their Judaism are in for a constant religious, intellectual, and institutional struggle. To me, that struggle seems rather hopeless, especially for non-Orthodox Jews. I cannot understand how such Jews, living as equals among non-Jews, adopting most national customs and participating fully in public life, can expect their children not to fall in love with a person from the other 98 percent of the population, let alone justify the demand that they refrain from doing so. Isn’t it obvious that the young people will see that demand as arbitrary and contrived? Isn’t it clear that nature will prevail?

In Israel, the situation is the diametric opposite. Secular Israelis speak Hebrew, read Jewish sources in their original language, celebrate the Jewish holidays, and mark life’s most significant milestones—birth, marriage, death—in the traditional (Orthodox) manner. They marry Jews naturally. In Israel, even secular identity is Jewish, and certainly more traditional than the Judaism of the garden-variety American Jew—since, in Israel, cultural and national assimilation pull toward Jewish tradition. Add to this the national element (service in the IDF, political participation, etc.), and the result is a stable Israeli-Jewish identity that has virtually no parallel in the Diaspora.

When these two Jewish cultures are brought together, they are bound to clash, tragically so. My American Orthodox friends (and some national-religious Jews in Israel who still struggle with a Diaspora Orthodox mentality) find that practicing Judaism is too easy in Israel. They miss the heroism of rejecting the natural, the passion of making an existential choice. They miss the education and the devotion. From their personal perspective, they are right; but from a historical perspective they are wrong: in history, the natural defeats the artificial every time.

Similarly, many American Jews are proud of the proliferation of denominations. In truth, as a secular Israeli with a bit of a traditional streak, I like many of the changes that the non-Orthodox denominations have injected into their Judaism from the outside environment. It is nevertheless clear to me that these changes have been caused, to no small degree, by the pressure of assimilation. In Israeli eyes, the resulting permissiveness inevitably undermines the tradition and serves as further testimony to an identity problem that does not exist in Israel.

Thus, when an American Jew criticizes Israel for its religious conservatism—a completely accurate description—the Israeli sees someone who, unable to keep the fundamentals of faith transmitted to him by his father, has exchanged some of them for modern American beliefs and principles and is now paradoxically demanding that Israeli Judaism be less Jewish and more American. Any similar process in Israel, where the natural strength of Jewish identity greatly reduces the need for “progressive” religious alternatives, will perforce be slower, more patient, and much, much more traditional.

In his response to Halkin’s new essay in Mosaic, Allan Arkush observes that in Letters to an American Jewish Friend,

Halkin’s account of Israeli culture [was] almost as scathing as his description of American Jewish culture. . . . Unfortunately, Israel had not yet succeeded in fulfilling, for him, the Zionist vision of a culture “identifiably Jewish in all its aspects while at the same time serving as the basis for a modern society whose members will share a common cultural identity that draws on what each of them has brought to it.” Still, he did see signs that things were headed in the proper direction and reported on them with some degree of enthusiasm. Is he, I wonder, still upbeat about this?

I can’t speak for Halkin on this point, but to me, the answer to Arkush’s question is obvious. A historian 1,000 years hence will look back and see, in the case of Israel, the full range of Jewish cultural creations in every genre and at every level. Indeed, a great bounty of creativity has flowed out of Israel in just 65 years—years that have seen many internal disputes, and many hard external battles, all taking place against a background of national unity and Jewish solidarity. In almost every area, and in every sector of the populace, an artistic, intellectual, and spiritual Jewish elite labors to preserve and to develop a complex, penetrating, self-aware Israeli and Jewish identity. Alongside it, there flourishes an authentically rooted, traditional, popular culture. And I am referring only to creations bearing a direct relation to Judaism, leaving aside the numerous ways in which the Hebrew language has been put to use in works that have no clearly Jewish content.

In any case, rivalry over relative degrees of cultural sophistication and most-favored-Jewry status are irrelevant and distasteful. The main thing is and should remain the brotherly effort of Israeli and Diaspora Jews to uphold Jewish culture and religion in the modern world. And on this point Halkin again isolated the core of the matter 35 years ago: in that modern world, Israel has no natural alternative as a sustainable solution for Jewish survival; therefore it is also the foundation upon which higher floors can be most safely built.

When our eldest son was seven, he learned the lines of the heartrending lament sung by David when informed of the grisly deaths of Saul and Jonathan in battle with the Philistines on Mount Gilboa (2 Samuel 1: 19-27). It is one of our people’s greatest poems, approached by very few later works. Whenever we go to visit Kibbutz Maoz Haim, we pass Gilboa and sometimes stop to climb it. On our way up, we pause for a few moments of silence, and my son declaims:

“Thy beauty, O Israel, upon thy high places is slain! How the mighty are fallen!”

In the right season of the year, the soil of Gilboa beneath our feet is soft and aromatic, studded with fragments of flinty rock and crowned by the purple Gilboa iris. The green Jezreel valley spreads out below us, and the entire horizon is Israel. Our brief moment of Jewish-Zionist reflection can have no parallel anywhere in the Diaspora, no matter how creative and sophisticated its Judaism. It is a moment of self-evident belonging, of identifying-as and identifying-with. At such a moment, even an old cynic like me finds himself blessing his fate and sharing the blessing with his children.

Ran Baratz, professor of ancient philosophy at Shalem College, teaches philosophy, history, and Zionist thought at a variety of other Israeli institutions as well. The executive director in Israel of the Tikvah Fund’s program in political thought, economics, and strategy, he is the founding editor of  Mida, a new Hebrew-language website .

It's Only Natural
1. Essay

By Our Efforts Combined
6. Response