What Would Ben-Gurion Do

. . . if he were caught between the rise of al-Qaeda and Iran and the decline of the United States? 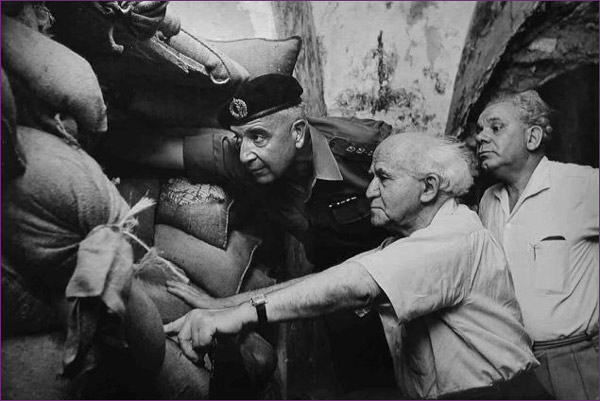 David Ben-Gurion with IDF Commander Yossef Nevo and Mayor of Jerusalem Mordechai Ish-Shalom at an army post at the Jerusalem border, 1962. By David Harris.
Response
Michael Doran
About the author

Ofir Haivry in “Israel in the Eye of the Hurricane” calls for reviving David Ben-Gurion’s activist school of foreign policy. In building his case for the rightness of such a policy, Haivry provides us not only with an insightful survey of the historical development of Israeli strategy but also with a framework for comparing policies across time periods. His approach is particularly helpful in pointing out the complex interconnections among local, regional, and global politics.

But in taking the view from 30,000 feet, Haivry misses the specific dilemma that Prime Minister Benjamin Netanyahu now faces: Israel is caught uncomfortably between the decline of American power and the rise of al-Qaeda and Iran.

As Haivry observes, America is pulling back. In the words of former National Security Adviser Tom Donilon, the Obama administration has determined that the United States is “overinvested” in the Middle East. President Obama, therefore, has shown himself to be deeply reluctant to commit the U.S. to any initiative designed to shape a new regional order. This standoffishness has resulted in a power vacuum. The vacuum is most obvious in Syria, where Shiite Iran and Sunni al-Qaeda are both growing increasingly powerful even as they vie with each other for influence.

For Israel, the dilemma arises not so much from America’s withdrawal as from the decidedly partial character of that withdrawal. Although Obama has taken one step out the door, the other foot is still planted firmly in place. At the United Nations General Assembly in September, for example, he targeted two problems for energetic solution: the Palestinian-Israeli conflict, and the impasse over Iran’s nuclear program. He could not have chosen two issues of greater concern to Israel. While other Middle Eastern leaders complain of an aloof and distant America, the Israeli prime minister finds himself hosting Secretary of State John Kerry nearly once a month. In short, Obama has boxed Netanyahu in.

As historical coincidence would have it, however, Ben-Gurion had to grapple with an analogous dilemma, and in doing so his activist school reached the zenith of its influence. In the mid-1950s, as radical pan-Arabism shook the region, the Eisenhower administration, which leaned toward the side of the Arab states, was singularly fixated on solving the Arab-Israeli conflict. The best way to achieve that goal, the President believed, was to force Israel to make painful territorial concessions.

And there was more. In 1955, Gamal Abd al-Nasser, the charismatic young leader of Egypt and champion of pan-Arabism, had signed a massive arms deal with the Soviet Union. Eisenhower chose to interpret Nasser’s move as a hedge against Israel rather than a rejection of the West per se. Rolling back Israel could therefore also serve as a means of wooing Nasser away from the USSR.

Not surprisingly, a significant gap in perception opened up between Jerusalem and Washington. The Americans fawned over Nasser; the Israelis increasingly saw him as an existential threat. As a result, Ben-Gurion was forced to adopt a bifurcated strategy. Wherever possible, he showed deference to the United States—making sure, for example, to cooperate with Eisenhower’s Arab-Israeli peace initiative. At the same time, in a practice that enraged the Americans, he did not refrain from launching aggressive border raids against his neighbors, including Egypt.

Events reached a high point in 1956 when, ignoring explicit American warnings, Israel launched a war against Egypt in concert with the French and the British. That coalition was itself very much the product of the preceding two years of Israeli activism. By demonstrating Israel’s willingness to act independently of Washington, and by showcasing considerable military prowess, Ben-Gurion had laid the groundwork for an alliance with France that in the next decade would prove a godsend to the newly independent Jewish state. It was, indeed, the French who roped the British into the coalition against Egypt.

Although much has changed since then, there is a good deal to be learned from this historical example. Specifically, if Israel were to revitalize Ben-Gurion’s activism in today’s circumstances, what goals would it pursue?

In addressing this question, Haivry himself argues in favor of “abandoning the preoccupation of the last decades with two issues at the expense of virtually all others: namely, the conflict with the Palestinians and the Iranian nuclear threat.” Ben-Gurion’s track record suggests otherwise, especially with regard to Iran.

In the 1950s, the Israeli leader’s top priority was arresting the advance of Egyptian military power. The Soviet arms deal gave Nasser an edge: an advantage that to Ben-Gurion represented a threat on the same order as the Iranian nuclear threat represents to Israel today. Indeed, if Ben-Gurion were reincarnated as an adviser to Netanyahu, he would undoubtedly draw a parallel between the rise of Iran as a nuclear power—and the American posture that has inadvertently facilitated that rise—and his own experience with Nasser.

Just like Egypt in the 1950s, Iran today presents a nexus of three key factors: malevolent intention, lethal capabilities, and strategic determination. None of Israel’s other antagonists on the Middle East scene exhibits such a multidimensional challenge. Al-Qaeda, to be sure, is fearsome. But Sunni jihadism in general is organizationally fragmented, militarily weak, and strategically inept. The danger it poses to Israel is real enough, but hardly rises to the level of an existential threat.

The primacy of the Iranian challenge raises a key question. If Ben-Gurion were alive today, would he urge Netanyahu to follow his example in 1956 and launch a strike against Iran that could, plausibly, turn into full-scale war? The answer is almost assuredly no.

Let’s assume that Israel actually possesses the military capability to destroy the Iranian nuclear program (a big assumption). In the event that led to all-out military confrontation, it would lack great-power support, something that Ben-Gurion regarded as an absolute prerequisite. In 1956, he gave the order to attack only after he had ensured the backing of Britain and France.

Netanyahu enjoys no such support today. Getting into a war with Iran all by himself would be easy enough. But getting out of it would require the good offices of the United States, which he cannot count on.

This, however, does not entirely nullify the activist option. Extrapolating from his behavior in 1954-55, but stopping short of war, Ben-Gurion would press forward with the most muscular policy possible, especially through an aggressive covert campaign against the Iranian nuclear program. All the while, using the model of Britain and France in 1956, he would search for actors willing to partner with Israel against Iran on the wider Mideast scene.

Granted, it is not entirely clear that such actors exist; but the possibility is insufficiently explored in Haivry’s analysis. For example, after discussing the three “clusters” of states in today’s Middle East, Haivry writes: “Israel is, to say the least, not a good fit for any of these regional groupings.” He thereby scants one of the most striking developments of the last three years—namely, the confluence of interests between Israel and the Sunni Gulf states, Saudi Arabia first and foremost.

A reincarnated Ben-Gurion would certainly investigate whether behind-the-scenes cooperation between Riyadh and Jerusalem was possible, and whether an activist foreign policy could help to solidify it. The arena offering the greatest potential for such cooperation is Syria, where shifting the balance against Iran’s proxy Hizballah is in the interest of both the Saudis and the Israelis. An additional advantage in Syria is that Netanyahu can act aggressively there without unduly complicating relations with Washington.

Of course, the impediments to cooperation between Jerusalem and Riyadh are considerable, and it would be difficult to pull off even a covert alignment with any effectiveness. But the Middle East is changing rapidly, and the stakes are very high. It would be a mistake to assume that yesterday’s impossibility will remain unthinkable tomorrow.

Who knows? In the process of courting the Gulf states, Netanyahu might even find other partners whose cooperation he could not have foreseen. After all, Ben-Gurion planned neither the alliance with France nor the alignment with Britain. It was his activism that generated both relationships. Activism, he understood, was a form of advertisement.

Michael Doran, a senior fellow of the Saban Center for Middle East Policy at the Brookings Institution, is a former deputy assistant secretary of defense and a former senior director of the National Security Council in the George W. Bush administration. He is finishing a book on Eisenhower and the Middle East.

Assaf Orion
January
Israel in the Eye of the Hurricane
2. Response

What Would Ben-Gurion Do
1. Essay

Israel in the Eye of the Hurricane
3. Response

Beware an Alliance of the Weak
5. Response

The Middle East—It's Bad Enough As Is
6. Response