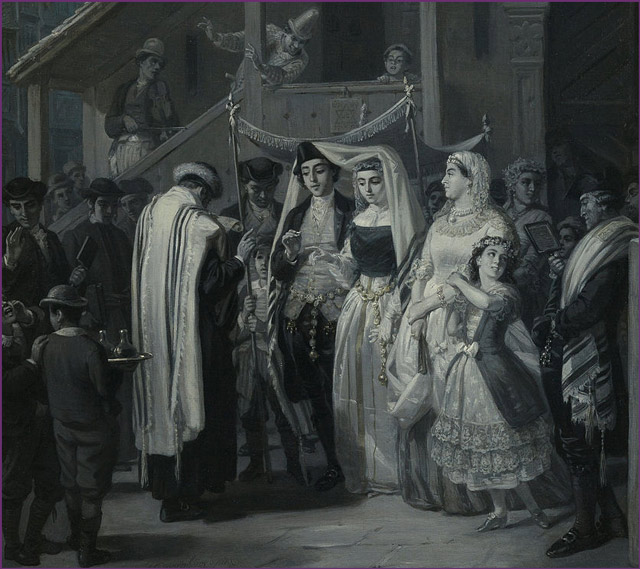 Response
David Wolpe
About the author

The first same-sex marriage I conducted was between two women who had been together for nineteen years. They stood under the huppah with tears streaming down their faces.

We’ve come a long way. At one time, the rhetoric dominating the discourse on homosexuality among the gatekeepers of traditional Judaism was condemnatory at best, cruel at worst. In one of his milder statements, the great halakhic authority Rabbi Moshe Feinstein wrote in the 1970s: “To speak of a desire for homosexual intimacy is a contradiction in terms.” Few would make such a statement today. Let us be grateful for small mercies.

But now Sam Schulman has offered a streamlined denunciation not of homosexuality itself but of same-sex marriage. Despite some slightly snarky asides—about the Conservative movement’s approval of rabbinic officiation at such unions, Schulman writes: “looking upon their work, the rabbis found it very good”—his tone is measured and his argument cogent. Pointing out that kiddushin in the Jewish tradition mandates a procreative effort to build a Jewish family, he argues that, in this respect, marriage in Judaism is not viewed as a romantic alliance between two partners. Therefore, he concludes, same-sex marriage, whatever may be its mitigations and merits, is not Jewish marriage.

There are three distinct problems with this analysis: it ignores the Torah’s insights into human nature; it elides the rabbinic tradition and the realities of halakhic (legal) change; and it treats society as static.

Genesis begins by stating that we are all created in God’s image. Then the Torah tells us that it is not good to be alone; in fact, loneliness is the first thing the Bible calls “not good.” The coupling of these statements should give us pause; it suggests that the joining of two human beings cannot be an endeavor devoted solely to shoring up society. Humans were created singly (nivra adam y’hidi), the Mishnah emphasizes, because each of us contains an entire world.

Therefore, a utilitarian reading of creation—we are here in order to make more of us, or we are to get married solely in order to reproduce—is too simplistic for the depth of the Torah, or of human life. Rather, we are here to be joined to one another, solitudes in search of love. Procreation may be the first commandment, but it is emphatically not the first imperative.

The talmudic rabbis themselves make clear that marriage was never meant to be solely a child-producing enterprise. Couples too old to procreate, for example, are not prohibited from being married. In the medieval period, no less an authority than Rabbeinu Tam speaks of the permissibility of intercourse with a barren woman for purposes of pleasure. In his 14th-century commentary on the prayer book, David Abudraham states that the reason no blessing is invoked specifically for progeny at a wedding is that even couples incapable of procreation merit the full seven blessings of the traditional marriage ceremony.

Biblical exegesis concurs with such a reading. Why does the patriarch Jacob become irate when his wife Rachel cries out, “Give me children or I am dead” (Genesis 30:1-2)? Because, according to the late-medieval commentary Akedat Yitzhak, she has wrongly seen herself as a vehicle for childbearing alone.

In addition to bearing children, then, marriage serves the great aim of enabling human beings not to be alone, to enjoy the satisfactions of intimacy. To this, we today can add that, even given the stipulation that the purpose of Jewish marriage is to build “a home in Israel,” many same-sex couples are doing just that, a home complete with children who would otherwise not have parents or not be raised as Jews.

Does halakhah evolve? There are the obvious and easy examples. Take Exodus 21:12: “He who fatally strikes a man shall be put to death.” Or take the instances of the rebellious son (Deuteronomy 21:18) and the violation of shabbat (Exodus 31:15), both of which are deemed capital offenses. Along with countless other prohibitions and directives, many of them no longer operative after the destruction of the Temple, these laws have been rethought, changed, or simply ignored by the talmudic rabbis and later authorities.

That halakhah changes is not, in itself, an argument to change any specific ruling. But when we focus on one “violation” of law to the exclusion of others, it does raise a question: is the issue the severity of the transgression or the psyche of the objector?

The most comprehensive change in modern times, of course, involves the status of women, who in the liberal movements now serve as cantors, rabbis, and witnesses, and whose position in Orthodoxy is a subject of heated debate. And this brings us immediately to the third simple reality: as society changes, so does Jewish practice.

Schulman himself states: “We may take it as a rule that it would be most unusual for someone with gay friends, colleagues, or relatives to remain opposed to legalizing gay marriage, and quite normal for that same person to support it wholeheartedly.” But then, inexplicably, he proceeds to argue as if this datum had nothing to do with the positions on same-sex marriage adopted by the liberal movements in Judaism. Instead, he effectively insists that tradition must remain unaffected by such “rules” of human experience. This attitude hovers somewhere between bewildering and benighted.

Schulman finds it perplexing that Jews support gay marriage at even greater rates than comparably liberal non-Jews. Perhaps being historically marginalized, with a resultant empathy for the “other,” is a profound Jewish experience. Or it could be that justice is a deep Jewish passion. Jews seem to internalize what the Midrash means when it says that the only reason the mitzvot were given was to refine the character of God’s creatures. Compassion (rahmanut) is not to be dismissed or disdained; according to the Talmud, Jews are defined by being compassionate people and the children of compassionate people.

I have a crazy theory; see if you agree. It’s that gay people generally want to lead lives of conventional respectability. So much so, in fact, that many are prepared to suppress their sexual nature to lead such lives. The desire for respectability is commendable; the deception it involves is not. To avoid deception, you can try to change the person’s nature. Good luck with that. Or you can modify a social institution so that gay people can have what the rest of us take for granted: the chance to find love and respectability in the same person.

As a rabbi, I will not stand before the gay members of my congregation and tell them that the tradition they cherish cannot sanctify a union with the only sort of person whom they can fully love. Sam Schulman finds that un-Jewish. Remembering those tears under the huppah, I find it simple, sacred, and very Jewish indeed.

David Wolpe, a Conservative rabbi, is the spiritual leader of Sinai Temple in Los Angeles and the author of, among other books, Why be Jewish? and Why Faith Matters. He can be found on Twitter @RabbiWolpe.

Same-Sex Marriage and the Jews
2. Response

Who's Afraid of Jewish Marriage?