This is a response to Same-Sex Marriage and the Jews, originally published in Mosaic in February 2014 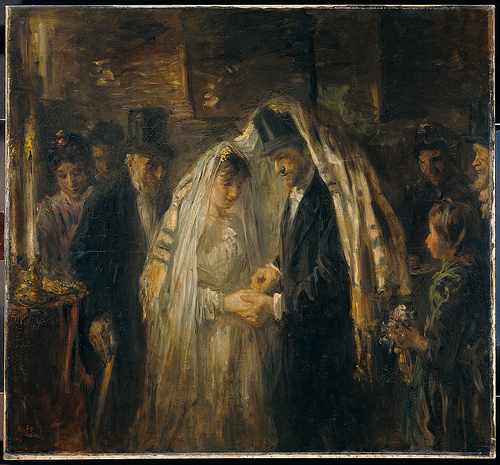 In “Same-Sex Marriage and the Jews,” Sam Schulman offers an insightful, erudite account of how non-Orthodox Jewish communities got from Leviticus 18 to the Kiddushin Service for Same Gender Couples—or, you might say, from Sinai to Stonewall. Still more compelling is his take on the quiet but devastating revolution this has worked in the Jewish view of marriage. Here I want to examine two of his claims in particular: that the revolution’s roots are Christian, and that Judaism in particular is paying the bill.

The first point misreads Christian theology, and the second amputates Schulman’s own argument against Jewish same-sex marriage—an argument whose premises weigh equally against any society’s redefinition of marriage. I submit that Judaism’s insights into the social value of marriage are general, not specific, and the same is true of the harms of redefining it. That redefinition repudiates ideas of marriage common to Christians and Jews.

What makes Jewish marriage unique? Only among Jews, Schulman says, does marriage have the function and “inner significance” of “generating a future for both Judaism and the Jewish people.” A Jewish spouse takes responsibility for the destiny of the entire Jewish people as—here he quotes the theologian Eliezer Berkovits—“a link in the generations, a child who receives and a parent who transmits with the intention” of perpetuating God’s people. Marriage among Jews exists for a purpose, Schulman says: “the transmission of the life of Judaism.”

But which society could survive without “generating a future” for itself—without taking responsibility for its destiny by continually turning children into parents? Social reproduction is no peculiarly Hebraic need. Any people that abdicates orderly reproduction is just decades away from extinction, or sheer replacement by immigration.

Indeed, Schulman acknowledges, if only in passing, that Jewish marriage is also like “every kind . . . that has ever existed” in being socially regulated; that the prohibitions in Leviticus on non-marital sex were ultimately seen as binding on all humanity; and that marriage does irreplaceable social good that statisticians (and not just rabbis) can demonstrate. How can that be, unless sexual and marital norms are good for any people?

Schulman continues: “Judaism needs Jewish marriage” because “what makes a Jew is not purity of race” or “DNA” or certain “words” or creeds, but “the mundane work” of Jewish marriage and family life. But the same is true, again, of any culture. Even so avowedly creedal and immigrant a nation as America can’t perpetuate itself simply by oaths of fidelity to the Constitution. The deep habits of mind, the memories and sympathies that define the American people, too, require the “mundane work” done within American family life.

But if the link between marriage and procreation is universal, Schulman’s question only sharpens: why is it now being severed? A prominent and striking part of Schulman’s answer is: Jesus.

In the gospels, Jesus declares marriage indissoluble “from the beginning” because it makes of two people “one flesh.” By repeating that phrase, “one flesh” (Genesis 2:24), and by omitting the nearby injunction in Genesis to “be fruitful and multiply,” Schulman thinks, Jesus turns the institution of marriage away from “fruitfulness” and toward “oneness.” And so, surprisingly, despite the persistent condemnation of homosexual acts in Christian teaching, “the Christian idea of marriage”—the idea of oneness as opposed to fruitfulness—may be the best suited of all “to what is being pursued by marriage-seeking gays.”

Yet traditional Christian teaching was unanimous, across nineteen centuries and all denominations, in condemning not only non-coital sex but even contracepted coital sex, even between a married man and woman. The best explanation for this is that for traditional Christianity, marriage need not be, as Schulman suggests, either about oneness or about fruitfulness. Schulman may take the second horn of that dilemma, and I don’t wish to gainsay his reading of the Jewish tradition as doing the same. But he is wrong to think that Christianity rejects the second horn because it embraces the first. The dilemma is a false one. For traditional Christianity, at least, marital oneness and fruitfulness are inter-defined.

What, after all, makes for bodily (“one flesh”) union between two people? It isn’t pleasure or companionship alone, which platonic bonds can offer. It is, rather, what makes for bodily union within a person: coordination toward a single physical end that encompasses the whole. Within a person, physical systems are coordinated toward sustaining life. But a man and woman can be coordinated toward making new life. It’s because it makes a bodily union in this sense that coitus, the life-giving act, is also the marital love-making act—a seal of the spouses’ committed union of heart and mind by a union of “one flesh.” Conversely, because the act that makes marital love is also the kind that makes new life, marriage itself is uniquely deepened by family life: the spouses’ embodiment as “one flesh” in children completes their one-flesh union in the marital act. Finally, this all-encompassing union—including its orientation toward bringing new human beings to maturity—requires all-encompassing commitment: permanent and exclusive.

Thus, in grounding indissolubility on the spouses’ being “one flesh,” the Christian tradition implicitly refers to procreation and unity, each through the other. I argue for a related view of marriage, from secular premises, in a co-authored book that Schulman cites. He misreads it as offering a religious case for the idea that marriage is useful because it heightens sexual pleasure. As even the brief summary above should show, here the normally scrupulous and subtle Schulman fairly mangles the argument advanced in that book by Ryan Anderson, Robert George, and me. (Even our fiercest critics have never accused us of focusing too much on pleasure!)

What Schulman’s analysis does highlight—what Jesus may well have given new emphasis—is a dispute not about the structure of marriage but about its value. Perhaps Jews thought of marriage as valuable only as a means for legitimizing children. Perhaps that is why divorce was allowed particularly for infertile couples, as Schulman says. By contrast, the Christian tradition, in refusing to dissolve infertile unions, treats marriage as valuable in itself. But that doesn’t mean it should logically sanction same-sex marriage. After all, what Christianity treats as having a special kind of value is the all-encompassing bond that includes one-flesh union: coordination toward a single bodily end. And this requires a man and a woman. Where such union is impossible, there is companionship but not marriage. And other sex acts—even between husband and wife—can contribute only feelings of intimacy, not true bodily union.

In the end, I offer these critical points less as rebuttals than as friendly developments of Schulman’s thesis, which also turn out to extend it. For, curiously enough, he spends the least time on what might be his central point: that Jewish recognition of same-sex marriage overturns that Jewish institution. Much of his argument here takes the form of rhetorical questions: “What now happens to the legitimacy of Jewish marriage undertaken by straight couples in Conservative synagogues? How can these Jews be said to be in conformity with a law that arbitrarily requires conformity?” Or again: “If Jewish marriage . . . is defined” as having “a different telos, what happens to its power to define and confirm the Jewishness of children born to Jews?”

Behind these questions is the idea that social institutions shape our beliefs, which in turn shape our choices. If Jewish marriage is recognized between any two committed adults in love, the Jewish people can be expected over time to think of it as defined by that emotional quality, and by the psychological fulfillment of the partners, rather than by its orientation to family life and the transmission of Jewish identity. Over time, then, Jewish couples whose emotional attachment waned or wandered might be likelier to break up. Those seeking children might not think it all-important to marry beforehand. Perhaps parenting as well as Jewish identity might increasingly be seen less as a matter of duty or presumption, and more as a sheer choice, always at some level subject to a change of mind.

But spelling out these consequences makes it clear, once again, that their harms aren’t just Jewish. The stabilizing norms of marriage—by which it binds parents to each other and children to their own heritage—are critical for children’s development and identity in any society. Re-founding marriage on the shifting sands of adult psychological fulfillment is therefore bad for any group, as Schulman implicitly and occasionally grants.

So Schulman’s argument against Jewish same-sex marriage—that changing its telos in the public mind will undermine its benefits in perpetuating Jewish society—applies to civil marriage and civil society as well. And this again is where the concept of one-flesh union, properly understood, can help instead of harm. For that concept holds together oneness, fruitfulness, and total commitment—and did so for nineteen centuries of Christendom. It was only with the fall of the Christian marital ethic in the West that family life began to unravel and the redefinition of marriage that now threatens Jewish identity became even remotely conceivable.

Sherif Girgis is a doctoral candidate at Princeton in philosophy and a student at the Yale Law School. He is co-author, with Ryan T. Anderson and Robert P. George, of What Is Marriage? Man and Woman: A Defense.