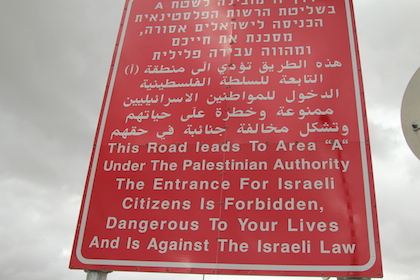 Sign prohibiting Israeli entry into Area “A” of the Palestinian Authority. Credit: IDFBlog.
Response
Hillel Halkin
About the author

I agree with Yoav Sorek that we should look forward to the day when there are no signs in the Land of Israel forbidding Jews to travel in parts of their historic homeland. But we should also look forward to there being no walls, fences, and roadblocks preventing and encumbering Palestinians from traveling in far more extensive parts of their historic homeland. However justified these may be at the present moment by considerations of security, they are surely more of an inconvenience and humiliation to Palestinians than the ban on travel in Area A is to Israeli Jews.

I point this out not because I wish to engage in the who’s right/who’s wrong debate that has characterized most discussions of the Israeli-Palestinian issue and that characterizes much of Yoav Sorek’s essay. Although I’m an Israeli and happen to think, if not in terms as black-and-white as Sorek’s, that my side has been more right than wrong, that’s not something I expect to convince the other side of. I point it out because any discussion of the problem that does not take into account the legitimate needs of both sides will just keep going around in circles.

Sorek is one of a growing number of people in Israel and elsewhere to argue that the conventional two-state solution for the Israeli-Palestinian conflict cannot be implemented because it does not satisfy these legitimate needs and it must therefore be abandoned in favor of its one-state alternative. With the first half of that proposition, I once again agree. Dividing the territory between the Mediterranean and the Jordan into an Israel and Palestine that will, like Israel and Egypt, live with little contact on either side of a sealed border requiring passports and visas to cross is not possible. Israelis and Palestinians are not separable like Israelis and Egyptians. They are irreversibly scrambled together, with over a million Palestinians now living in Israel and over a half-million Israeli Jews in the West Bank and East Jerusalem. Moreover, a majority of each people thinks it has a right—if not necessarily an exclusive one—to the entirety of this territory. No approach to the problem that fails to take these facts and feelings into account can work.

But the one-state advocates do not form a single group. Rather, they come from two diametrically opposed camps. One, on the international and Israeli far Left, calls for a de-Zionized bi-national state in which Jews and Arabs will be fully equal. The other, on the Israeli Right (international support for its position is non-existent), advocates a single Jewish state with a large Arab minority whose civil and human rights will be respected.

As a political concept, the bi-national Arab-Jewish state goes back to the 1930s. It was absurd then and it is even more absurd now. The idea of taking two bitterly warring peoples with different cultures, languages, religions, histories, and national aspirations and getting them amicably to share all of their institutions on an equal basis is either pitifully naïve or nastily Machiavellian. It is naïve in those who believe it can succeed. It is Machiavellian in those who know it cannot but support it because it will spell Israel’s doom. The naïve and the Machiavellian alike point to South Africa as a model, but conditions in South Africa in the early 1990s did not remotely resemble those prevailing between Israel and the Palestinians today.

Yoav Sorek belongs to the second camp, the advocates of a single, Jewish state west of the Jordan with a fairly accommodated Arab minority. Unfortunately, this, too, is a fantasy.

To begin with, who can believe that the world’s nations, including the United States, would agree to Israel’s annexing the West Bank in defiance of a long-standing international consensus in favor of an independent Palestinian state? As it is, Israeli settlements in Judea and Samaria have drawn repeated international condemnation that has been slowly but steadily inching toward the imposition of economic and diplomatic sanctions. The annexation Sorek calls for would immediately bring on sanctions far more severe than any threatened to date. There is no way that Israel, a country totally dependent on international trade, could withstand them for more than a short time—which is to say that there is no way it can seriously contemplate annexation in the first place. Inasmuch as Yoav Sorek must be aware of this objection, the only explanation I can think of for his ignoring it in his essay is his knowing that it can’t be answered.

For the sake of argument, however, let’s imagine the unimaginable: Israel annexes the West Bank, the international community looks the other way, and annexation becomes a fait accompli. Now, all Israel has to do is figure out how it can politically absorb some two million hostile West Bank Arabs, thereby increasing its Arab minority from the roughly 20 percent that exists within its 1967 borders to over 40 percent.

Does it grant them full citizenship and voting rights, so that its Arab population is now in a position to elect 50 members to a 120-member Knesset? Does it deny them such rights and officially become the apartheid society that its enemies already accuse it of being? Does it resort to tricks and evasions, such as granting full rights on paper while making them conditional on Hebrew literacy tests, loyalty oaths, and bureaucratic review boards that will find reasons to turn down nine applicants out of ten? Does it make Palestinians the citizens of a West Bank Bantustan, empowered to elect their own school boards and dog catchers? Does it, without bothering to consult the Jordanians (who would of course refuse to cooperate), declare them citizens of Jordan?

“Obviously,” writes Sorek, “none of these options is simple or uncontroversial.” But not to worry. “At only a fraction of the effort invested in the ‘two-state solution’ over the last two decades, it would be possible to craft a model of governance that would benefit all parties.”

Since so little effort is required, one would have appreciated Sorek’s investing some and giving us the benefit of his conclusions. And yet what could these have been? There is no conceivable “model of governance” for an annexed West Bank that could avoid either, on the one hand, the full enfranchisement of its inhabitants with all the consequences for Israel that this would entail, or else, on the other hand, their permanent disenfranchisement in one form or another, with all its consequences. Although it’s by now a tired cliché to say that an Israel that absorbs the West Bank cannot continue to be both Jewish and democratic, this doesn’t make that statement any less true. (I won’t comment on the almost comical paternalism, let alone the practical unfeasibility, of Jewish planners creating a “biospheric sanctuary” in the West Bank for its Arab natives, who would no doubt be eternally grateful to be spared all the ills of modern economic development.)

It leaves us, I believe, with what a smaller number of people than the one-staters have been advocating for years, namely, two states in one country—or, to put it more concretely, a Palestinian-Israeli federation in which two sovereign governments, each with its own institutions, one in the West Bank and one in pre-1967 Israel, collaborate in administering a territory that is the homeland of both Arabs and Jews. Each people would, subject to restrictions designed to safeguard the majority status of the other in its sovereign area, have the right to live and work in every part of this territory and to travel freely in all of it. Jews living in the Palestinian state would be free to choose Israeli or Palestinian citizenship (or perhaps both); Arabs now living in the Jewish state would have the same right.

One might call this the “two-state-minus” solution—one in many ways similar, in a bilateral form, to the multilateral structure of the European Union. Although France and Germany are still sovereign nations, their sovereignty is now constrained in various ways by the mutual obligations and commitments conferred on them by their EU status. One can imagine a similar arrangement between Israel and a Palestinian state. Benjamin Netanyahu was imagining it last month when he suggested, as Sorek mentions, the possibility of Israeli settlers living in such a Palestinian state—and then, with a characteristic lack of political courage, declined to stand behind what he had said. No matter. He said it, and in doing so he was the first Israeli leader to put on the table—on a little corner of the table, it must be said—an idea whose time, I believe, will come.

Wouldn’t such an arrangement involve enormous problems, too? Of course it would. Unlike Yoav Sorek, I do not think that only a little effort is called for in conceptually squaring the circle of the Israeli-Palestinian conflict. I do think, though, that there are better ways of doing it than the one he sketches in his essay.

Hillel Halkin’s books include Yehuda Halevi, Across the Sabbath River, A Strange Death, Melisande: What are Dreams? (a novel), and a forthcoming biography of Vladimir Jabotinsky (Yale).  He has translated Yiddish and Hebrew works by Sholem Aleichem, Mendele Mokher Seforim, Moyshe Kulbak, S.Y. Agnon, Shmuel Hanagid, Y.H. Brenner, and many more. His essays and columns have appeared in Commentary, the New Republic, the Forward, the Jewish Review of Books, and elsewhere.