This is a response to The Death of Jewish Culture, originally published in Mosaic in May 2014 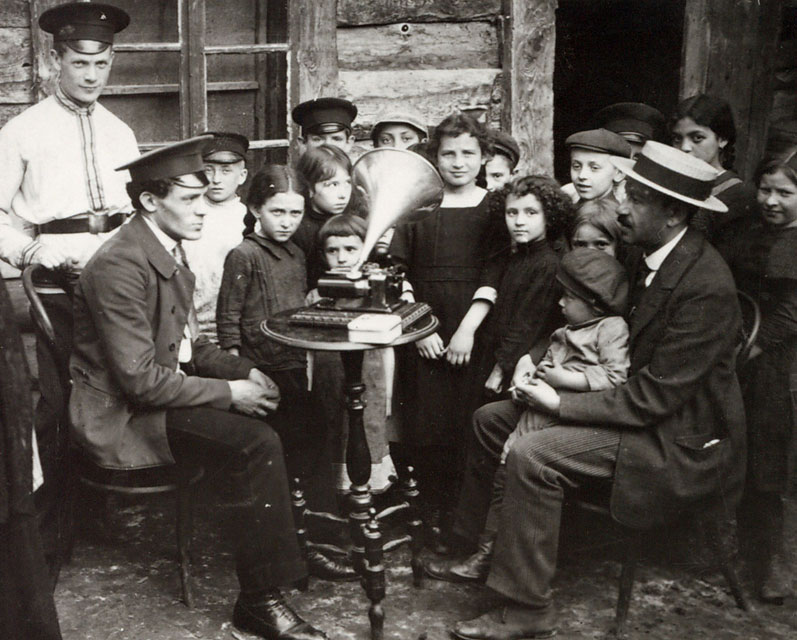 The folklorist Zusman Kisselhof recording Yiddish songs in a shtetl in Kremenets, Ukraine, in 1912.

Reading James Loeffler’s masterful diagnosis of the failure of cultural Judaism, I was reminded of my first meeting, nine years ago, with the newly arrived director of an Orthodox educational center in Portland, Oregon. We were walking out of synagogue services together when he introduced himself by saying: “I hear we’re in the same line of business.” Without wanting to be rude, I felt I had to correct him. “No,” I said, “we’re not. You teach Torah. I teach Jewish studies.”

The difference between the two is an important part of the story Loeffler tells so cogently, and it sheds a light of its own on his claim that secular cultural programs, despite their often admirable achievements, are a shaky substitute for the “thick, expansive, and holistic identity” promised by the term “Jewish culture.” Scholarship, in the form of academic Jewish studies, has frequently been enlisted in attempts to build just such a modern Jewish identity. It was, as Loeffler notes, an important element in the portfolio of the now-defunct Foundation for Jewish Culture, an organization that funded my own university department quite generously. Even more directly, the Posen Foundation has sought to promote its own vision of a “thick, expansive, and holistic” secular Jewishness by funding courses in this area on American and Israeli college campuses. The fact that it froze its American initiatives a few years ago may simply indicate a shift to other means toward the same end, like the projected multivolume Posen Library of Jewish Culture and Civilization; or it may be yet another sign, at least outside of Israel, of cultural Judaism’s poor return on investment.

Like cultural Judaism, its frequent partner, the academic study of Judaism also has a backstory, in this case going back to the emergence in Germany of Wissenschaft des Judentums, the modern “science” of Judaism. Throughout the 19th century, the fruits of this scholarship were enlisted in such non-academic endeavors as making the case for Jewish citizenship, justifying internal religious reform, and retrieving from the Jewish past certain elements (like national identity) that had become particularly useful or desirable in the conditions of the present.

Unlike in the case of cultural Judaism, however, there has always been a fundamental tension in Jewish studies between the scholar’s aspiration toward detachment and objectivity and the various public projects that scholarship has been asked to serve. Today, especially, academics are historically orientated, or try to be. In his oft-cited book, Zakhor, the late Yosef Haim Yerushalmi explains that whereas the historian assembles and tries to give order to mountains of facts, working to reveal the whole fabric of history and making few claims about how it should guide life today or why one strand should be valued more than another, the building of communal identity depends on selecting certain facts, endowing them with contemporary significance, and leaving aside or effacing others. I am not convinced that the academic pursuit is really as objective as claimed (more on this below), but in theory it certainly puts scholarship in frequent conflict with identity formation. I later remarked to that same Orthodox director, who became my closest friend in Portland, that at the university we engage less in keyruv (bringing close, the Hebrew term for Orthodox outreach to less affiliated Jews) than in rihuk (distancing).

Nevertheless, one can see why scholarship has indeed been a component of the American cultural initiatives surveyed by Loeffler. To promoters of such initiatives, it seemed that the robust presence of Jewish-studies programs and courses on college campuses would help attract young Jews and engage them in the study of their heritage during key impressionable years. Moreover, such programs would also benefit local Jewish communities, enriching their intellectual and cultural life. More recently, as colleges and universities have become the sites in American society most welcoming of anti-Israel propaganda and prejudice, some have also hoped that funding the study and teaching of accurate information about Israel would help provide a counterweight to hostile currents on campus.

None of these hopes was altogether unfounded. Since the 1960s, Jewish-studies programs have indeed played a positive and in some cases a galvanizing role in American Jewish life. Thus, for all of the seriousness with which I take the goal of creating in my classroom a neutral space where students of any background can undertake the dispassionate study of Judaism—a task made somewhat easier since most of the students in our state university are not Jewish—there are those who, in spite of my best efforts at rihuk, perversely insist on finding personal, even transformative meaning in their studies; some have even gone so far as to convert to Judaism, decidedly not a course requirement. In addition, our program is happy to engage the local Jewish community as well as the wider Portland population. For myself, I also see it as part of my educational mission to correct slander and misinformation about Israel whenever it manifests itself on campus.

Yet the fact remains that the discipline of Jewish studies is indeed no “pathway to Jewish identity” and no “ultimate outreach tool,” as Loeffler paraphrases the hopes of the more programmatic advocates of Jewish culture. While the work of scholars has added incalculably to the possibilities for Jewish self-understanding, its effects are produced mostly indirectly, requiring, to go back to Yerushalmi, the decision of the individual to move from indifferent history to committed memory.

And that is not all. The professional culture of Jewish studies today is marked by an increased wariness and even resentment of the notion that the field and its scholars have anything whatsoever to do with the aims and interests of Jewish communities or even individual Jews as Jews. Inside and outside the Association for Jewish Studies (AJS), the field’s largest professional body, recent years have witnessed debates on the appropriate relationship of Jewish-studies professors to local Jewish communities, Hillel and other campus organizations for Jewish student life, and even philanthropic donors to Jewish studies, not to mention their relationship to the cause of Israel advocacy or the issue of anti-Israel boycotts.

Some of these debates are genuinely thoughtful and reflective. Others betray distemper or panic at the thought that the academy’s vaunted disinterestedness and objectivity, in too many instances a thin cloak for its comfortably monopolistic Left-liberal culture, might become exposed to the bacillus of dissident ideas. Taken together, what all this suggests is that professors are rather less likely than musicians or artists to possess the key to what Loeffler holds out to be at least the theoretical possibility of an American Jewish cultural revival.

Finally, I’d adduce one more reason for skepticism with regard to outsized expectations for Jewish cultural initiatives. And that is culture itself. If scholarship has its built-in tension with communally-directed programs, so does art. Here, to Loeffler’s citations of I.L. Peretz, S. An-sky, and Hayyim Nahman Bialik, we might add the name of the great American scholar and literary critic Lionel Trilling (1905-1975).

In his 1961 essay “On the Teaching of Modern Literature,” Trilling asks what it means, practically and ethically, to include in the education of undergraduates the works of such transgressive modernist writers and thinkers as D.H. Lawrence and Friedrich Nietzsche, André Gide and Marcel Proust. On the one hand, Trilling observes, to domesticate these authors for purposes of classroom instruction amounts to falsifying the unmistakable import of their visions. (Satirizing what such a neutering process can entail, he offers an imaginary but entirely likely question on a final exam: “Compare Yeats, Gide, Lawrence, and Eliot in the use which they make of the theme of sexuality to criticize the deficiencies of modern culture. Support your statement by specific references to the work of each author. [Time: one hour.]”) Yet, on the other hand, seriously confronting the radicalism of these writers requires reckoning with the profoundly amoral, anti-social, and often antinomian force their work advocates and represents.

Going still further, Trilling describes “the chief intention of all modern literature [emphasis added]” as “losing oneself up to the point of self-destruction, or surrendering oneself to experience without regard to self-interest or conventional morality.” It is “freedom from society itself.” In sum, he writes, modern works of literature are less like static monuments of art than like “mobile and aggressive” war machines, and “one does not describe a quinquereme or a howitzer or a tank without estimating how much damage it can do.”

Of course, Trilling was talking about non-Jewish writers (with the partial exception of Proust). But it is not so great a leap to many of the Yiddish and Hebrew moderns. Despite the authors’ deep Jewish commitments, the literary works of Bialik, Peretz, An-sky and others howl with rage and despair, cry for release from social bonds and norms, even challenge the very notion of positive meaning in modern Jewish existence. It is true that, in doing so, these writers unleashed the kind of artistic energy that can indeed prove a source of new vitality, or at least creative destruction, and that in their own time contributed to genuine cultural renewal. One can therefore understand those who hope for the arousal of a similar cultural ferment today. But then, as Trilling might say, what would the grant application look like?

Michael Weingrad is professor of Jewish studies at Portland State University, and the author of American Hebrew Literature: Writing Jewish National Identity in the United States. His essays and reviews have appeared in the Jewish Review of Books, Commentary, and other publications, and he also writes at the website Investigations and Fantasies.