Down the Middle East Memory Hole

Most of the people in the Middle East have no idea that Jews once lived among them—virtually all signs of Jews there have been erased. How did this come to happen? 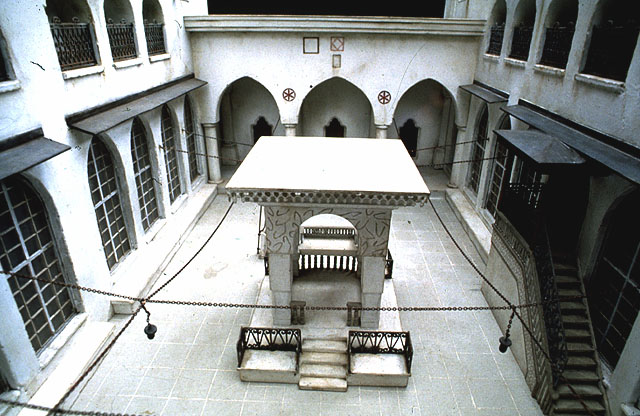 The courtyard of the Great Synagogue of Aleppo, as depicted in a detailed model. Beit Hatfutsot, Museum of the Jewish People, Tel Aviv.
Response
André Aciman
0 Comments Print Email Kindle

As the grandson of an Aleppan Jew, I needed to be reminded of what happened to Jews in two of the most ancient capitals of Middle Eastern Jewry—Aleppo and Baghdad—in the wake of the 1947 UN vote to partition Palestine.Matti Friedman accomplishes this very strongly in the opening section of his essay, “Mizrahi Nation.” By invoking events in present-day Syria, he also allows us to imagine what massacres would have resulted today had Syria’s remaining Jews not fled Hafez el-Assad’s viciously anti-Semitic regime.

As a Jew from Egypt, I was also pleased to see Friedman bring up the fate of the one-million displaced and dispossessed Jews of the Arab and Muslim world, about whom little or no mention is ever made in the press or in institutions of higher learning in the U.S. and around the world. Yet the vast majority of these Jews were autochthonous to the Middle East, and their presence there (as Friedman notes) predates the advent of Islam or of Christianity, in some cases by more than a thousand years.

No less compelling is Friedman’s treatment of the lingering aftereffects of nationalism, the dominant political ideology in Europe in the mid- to late-19th century, whose arrival in the Middle East at the turn of the 20th century is what spurred the persecution of Jews in many Arab countries. This contradicts the frequent claim that the real irritant to Arab and Muslim sensibilities was either the Zionist movement or the creation of Israel. “Rather,” as Friedman writes,

Zionism exacerbated a growing precariousness that, like Zionism itself, was a result of the advent of modernity and the rise of nationalism, and that appeared atop an older and more stable kind of discrimination.

Indeed, Friedman reminds us, Jews had always held—at best—second-class status in the lands stretching from the Ottoman Empire and the Middle East all the way around the Mediterranean littoral west to Morocco. To pretend that something like an era of convivencia lasted more than a few decades in Andalusia during the centuries after the Moorish conquest or, in the Ottoman Empire, after the initial welcome extended to Jews in the aftermath of their 1492 expulsion from Spain, is to engage in mythmaking. The dhimmitude of Jews in the Middle East has a long, ugly, and painful history.

Friedman might have done well in this connection to note what ultimately freed many Jews from their inferior status: namely, the advent of the much-deprecated force of Western colonialism. For the impoverished Jewish communities of the Middle East, British and French colonialism, accompanied by such large-scale educational enterprises as the Alliance Israélite Universelle, enabled rapid acquisition of modern languages, culture, and values. But such liberation also exacted a price. If one recalls Benzion Netanyahu’s thesis on the origins of anti-Semitism in ancient Egypt (where Jews allegedly sided with the foreign power—first Greece, then Rome—against local Egyptians), one might better grasp how, 2,000 years later, Arabs and Turks would come to nurse ill-will toward Jews the moment the latter began turning their eyes to the West.

Still, there are nuances and ironies here that complicate Friedman’s linking of modern Islamic anti-Semitism with the burgeoning of nationalism in the Middle East. Take, during this same period, the hasty rise of Jews in modern Egypt, to say nothing of their visible presence as bankers and members of the Egyptian parliament. In Syria, where anti-Semitism hit hard in the 1920s, my grandfather was among the many who left; but unlike those whom Friedman mentions as having ended up in New York City or Manchester, he moved to Egypt, where he set himself up as a bicycle merchant and prospered. Other relatives of mine, from the Ottoman Empire, did go temporarily to England and the United States, but didn’t settle there. They, too, would make their homes in Egypt, where they felt safe and became wealthy. British colonialism was a significant help to them and many others like them; in fact, it was only with the disappearance and displacement of colonialism and the protectorate system by homegrown autocrats that their sojourn in Egypt was brought to an abrupt and brutal end.

And that brings us to Israel, the alleged thorn in the side of the Arab and Islamic peoples of the Middle East, and to the issue of Israel’s legitimacy—a legitimacy vociferously denied by its enemies who to this day insist on branding it as an alien, Western intrusion into their homeland territory.

Friedman’s answer to this charge, more implied than stated, goes something like this. Yes, Ashkenazi Jews were central to the founding of Israel. Yes, Israel was the brainchild of the Viennese Theodor Herzl, and, as the long-dreamed-of homeland of world Jewry, it did indeed come about through being settled largely by European Jews fleeing pogroms, poverty, and the Holocaust. But even if not seminal to the country’s founding, the living, breathing Mizrahim of present-day Israel are the direct descendants of the same Jews of the Middle East who continuously inhabited that region since long before the advent of Islam until their summary expropriation and expulsion from most of it in the mid-20th century. Jews, in other words, are not exogenous to the Middle East; they have always been there.

According to Friedman, the Arab and Muslim peoples who expropriated and then expelled their Jewish populations still harbor the irksome memory of a Jewish presence in their midst. In this I believe he is largely mistaken. Arabs schooled in the Middle East after 1956 have no knowledge whatsoever that Jews once lived among them. The propaganda machine has erased (or defaced) all vestiges of Jewry, and the names of streets bearing Jewish names have been altered. Ask anyone in my home town of Alexandria where the Jewish cemetery is and you will get a baffled look. A Jewish cemetery?

In presenting his case that Israel is very far from being a colony, Friedman may be seen as offering a strong refutation to Ari Shavit’s showy “confession” in My Promised Land that Israel is indeed guilty of the sin of colonialism: the very sin so frequently invoked by its enemies to vilify and delegitimize it. For these enemies, the idea that Jews are native to the region is inadmissible—intolerable. And therein lies a clue both to their expunging of any memory of their own Jews and to their obsessive fixation on the un-erasable affront embodied in the existence of the Jewish state.

For what is it that really delegitimizes Israel in the eyes of its detractors? Why is the BDS movement so set against it, and not against, for example, Iraq, Syria, Lebanon, Egypt, Sudan, to say nothing of Turkey, all of which occupy territories hastily cobbled together into states by the Treaty of Versailles and/or the disappearance of the colonial system—and all of which behave reprehensibly toward their remaining non-Arab, non-Islamic, and non-Turkic minorities? The answer is so obvious that I hesitate to put it in words.

André Aciman, Distinguished Professor of comparative literature at the Graduate Center of the City University of New York, is the author of Out of Egypt, False Papers, and, most recently, the novel Harvard Square.