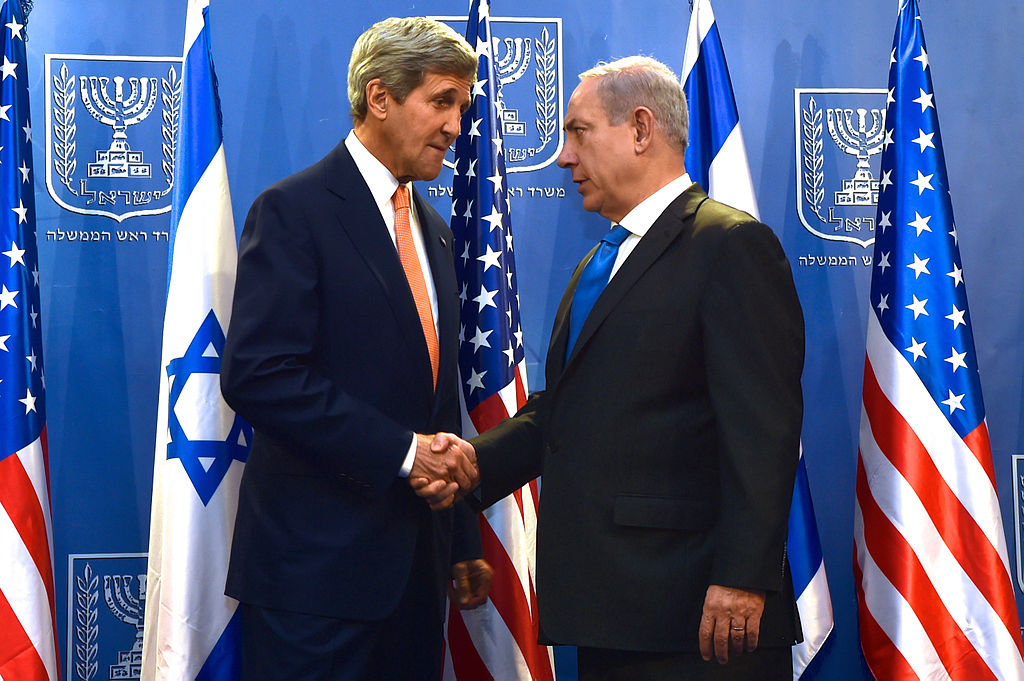 U.S. Secretary of State John Kerry shakes hands with Israeli Prime Minister Benjamin Netanyahu in Tel Aviv on July 23, 2014, before the two sat down to discuss a possible cease-fire to stop Israel's fight with Hamas in the Gaza Strip. Photo by the U.S. Department of State.

Years ago, when I was teaching, I regularly subjected my students to a lecture titled “The Four I’s.” Confronted with an essay using the words “impossible,” “inconceivable,” “inevitable,” or “irreversible,” I suggested, one was best advised to stop right there and do something more constructive. This was because the modern history of the Middle East—with its shape-shifting alliances and roller-coaster politics—offered no justification for the use of any such words.

In his sober and sobering essay in Mosaic, Elliott Abrams adds a new word to be banished from the Middle East political lexicon: “unsustainable.” (For good measure, we might also add its first cousin, “unacceptable.”) As he quite correctly observes, the most allegedly unsustainable aspect of the contemporary Middle East—Israel’s “occupation” of Arab lands since 1967—has proved itself quite sustainable. Indeed, he points out, Israel’s control of territories acquired in the 1967 war has outlived not just every leader in the region but some of the regimes they led. Along the way, what was once viewed universally as “unacceptable”—defined variously as Israel’s long-term control of the territories, Israel’s settlement project in the territories, and the denial of Palestinian sovereign claims in the territories—has achieved a certain, however partial, level of grudging, de-facto acceptance.

This is one attribute of what Abrams—whose book, Tested by Zion, is that rare thing, a dispassionate and refreshingly candid reflection on his service as a key American policy maker—appropriately terms Israel’s “long war.” To paraphrase, this is the idea that Israel, despite all the remarkable successes in its young life, remains shackled with a series of profound threats and daunting challenges that will likely define its strategic predicament far into the future.

The uncertainty of American leadership; the ambitions of Iranian ayatollahs; the barbarism of Sunni jihadists; the decadence of Palestinian politics; the base populism of the “Arab street”—these, Abrams shows in Mosaic, are regrettably potent features of the contemporary Middle East. Perhaps they aren’t immutable (another “i word”), as Israel’s peace agreements with Egypt and Jordan suggest, but they have displayed depressingly powerful staying power. In such a Hobbesian world, where Israel is a tiny entity surrounded by circles of aggressive antagonists, the Jewish state can win battles, but real, ultimate, final victory—in the form of full acceptance as a legitimate, even welcome partner in the region—remains a distant dream. Until then, winning the battles, while building the state, must suffice.

As with much of what Abrams writes, I find myself agreeing with almost every word. I may quibble about certain points, like the potential for non-Islamist forces to prevail in their contest with the Islamists (I am more optimistic than he), or the size of the Arab population that is blessedly indifferent to Jews and Israel (I probably peg it at a higher number than he does). And there is one paragraph, in the section on the deep-rooted hatred of Jews in “the Arab street,” to which I would offer a friendly amendment. There Abrams writes that only when “Islam’s pernicious teachings” on Jews are eliminated, as the Roman Catholic Church finally did with respect to its own teaching of contempt, can the problem be solved. But Islam, as such, is not the problem, any more than Christianity, as such, was the problem. Rather, just as the problem lay with certain Christians and their institutions, today the problem is with certain Muslims and their religious, educational, political, and intellectual leaders and institutions. Put differently, if the “pernicious teachings” ceased to be taught, they would also cease to exercise an impact.

But these are differences on the margin. In terms of Abrams’ core proposition, I agree: the grim reality for Israel is, of necessity, “the long war.” There is no wishing away either the mullahs’ dream of evicting the Zionist “cancer” from the Middle East or their practical efforts to bring that about. There is no contesting the visceral hatred of Jews that passes for reasonable political discourse in many corners of the region. (In this regard, I was shocked to see, courtesy of MEMRI, a recent clip of a mosque preacher explaining the Jews’ historic blood lust for Christian children—shocked because it aired on the official television channel of Jordan, one of the only two Arab states at peace with Israel.) There is also no disputing that Palestinians have been cursed too often and too long with leaders who look benignly at corruption (Fatah) and murder (Hamas). And there is, sadly, no dispelling the common view among Arabs, Israelis, Turks, and Iranians—to the chagrin of some, the glee of others—that America is, well, preoccupied.

And yet, despite my agreement with so much in this compelling essay, I still find something missing.

In my view, what’s missing is the element of Israel’s agency—that is, the degree to which Israel is not just acted upon but an actor capable of determining its fate. In an essay that justly celebrates Zionism as “the only democratic nationalist movement of the 20th century that succeeded,” curiously absent is the fundamentally Zionist idea that Israel plays a role in shaping its destiny beyond merely fending off enemies until they tire or move on. (The one significant exception is Abrams’ reference to Israel’s half-hearted support of Salaam Fayyad’s state-building enterprise during his brief tenure as prime minister of the Palestinian Authority.)

Before going farther, let me hasten to stipulate that mine is emphatically not the view of those who maintain that “if only” Israel were to withdraw from the West Bank, or divide Jerusalem, or give up its nuclear deterrent, or—the list goes on, just fill in the blanks—then the long war would end and peace would reign in the Holy Land. On this point, Abrams is right: to many of its antagonists, the problem with Israel is not what it does but what it is, namely, a sovereign Jewish state. Short of a “one-state solution”—as perverse a term as Middle East politics has ever produced—there is precious little Israel can do about that.

But to recognize that there is nothing Israel can or even should do to change the views of the annihilationists of Iran, the beheaders of IS, or the Holocaust deniers, quenelle-flashers, and blood-libelers lurking in the dark corners of Western democracies and Middle Eastern despotisms alike does not lead to the conclusion that Israel’s actions have no impact on its strategic position. To the contrary, they can have a substantial impact: on the political class in democratic countries that shapes critical decisions about economic ties, diplomatic relations, and defense cooperation; on the truly “undecideds,” including the many highly educated, highly sophisticated people whose lives don’t revolve around the granular complexities of the Israel-Palestinian dispute; on the changing demographic components of the American voting public, which no Israeli strategist should take for granted; and even on the vanguard of pro-Israel support among American and world Jewry, one of Israel’s most undervalued strategic assets.

In the military realm, it is axiomatic that actions have consequences; in Israel’s case, military victory enhances deterrence while battlefield stalemate invites continued adventurism by adversaries. Similarly in the political realm: Israel’s actions have repercussions, often of more than one kind. Certain policies may be worth pursuing, or even necessary to pursue, despite the price to be paid for the gains accrued; it is the task of leaders to make such assessments and decide what to do. But, as I’m sure Abrams would agree, to suggest that there are no repercussions is delusional.

Just as war planners limit vulnerabilities and shorten lines of communications to make them more defensible, Israel might consider applying the same approach to the political side of the long war. This would entail stressing, for example, the strategic significance to Israel of its liberal culture and values (a line championed, for example, by Benny Begin, no security slouch); the long-term importance of the higher standards of ethical behavior that Israel demands of its warriors (a theme associated with Natan Sharansky, also no shrinking violet on security matters); and the immense value to Israel of projecting itself as ever ready for partnership in pursuit of real, secure peace, no matter how bleak the political horizon may be.

In this connection, one serious national discussion might focus on disentangling the issue of Israel’s military occupation of the West Bank from the issue of the Jewish settlement project there. In terms of a traditional military occupation, Israel has the advantage of both the moral and practical high ground. Military occupation was thrust upon it by the aggression of its neighbors and remains legitimate until a state of peace obtains throughout the area. Indeed, as Abrams points out, most Arab leaders today don’t even urge Israel to consider terminating its military role until it is confident that a successor arrangement leaves it more secure than it is now.

Certain aspects of the settlement project, however, are on shakier ground. Ideology aside, it is not so simple, for example, to reconcile Israel’s stated support for the “two-state solution” with settlement expansion or territorial aggrandizement outside the security fence. Reiterating that Israel is prepared to withdraw from certain settlements as part of a secure peace deal doesn’t really explain the logic of building in areas that in any reasonable two-state solution would likely be included within the borders of a potential Palestinian state. After all, it strains common sense to propose paying twice: once to build and then a second time to vacate.

Note that I’m speaking here only about the politics of building “east of the fence.” In fact, despite what you read in many if not most media sources, the majority of new settlement units in the Netanyahu era have been built in territory even the Palestinians recognize will eventually be part of Israel. Nor do I imagine that a government statement forswearing new construction east of the fence will end condemnation of Israeli building policies altogether—not by a long shot. But in addition to the benefit of needed clarity, such a policy would contribute to delinking the hot-button issue of settlements from what should be the much less controversial issue of Israel’s military/security presence in the territories. Given the prospect of a long war as far as the eye can see, any reasonable step that can enhance support for the legitimacy of IDF operations in Israel’s “near-abroad” should merit serious consideration.

Let me conclude on the broader point. As the old joke goes: Israel’s situation is, in one word, good; in two words, not good. The humbling reality is that Israel is likely to live for a long time in the gray netherworld between those two conditions. Many factors, including the five negative trends to which Abrams wisely draws our attention, will affect how light or dark the shade of gray will be at any given time. A strong, creative, activist, and confident Israel has a role to play in this, too.

Robert Satloff is executive director of the Washington Institute and host of Dakhil Washington (“Inside Washington”), a weekly news-analysis show on al-Hurra, the U.S. government’s Arabic satellite channel.