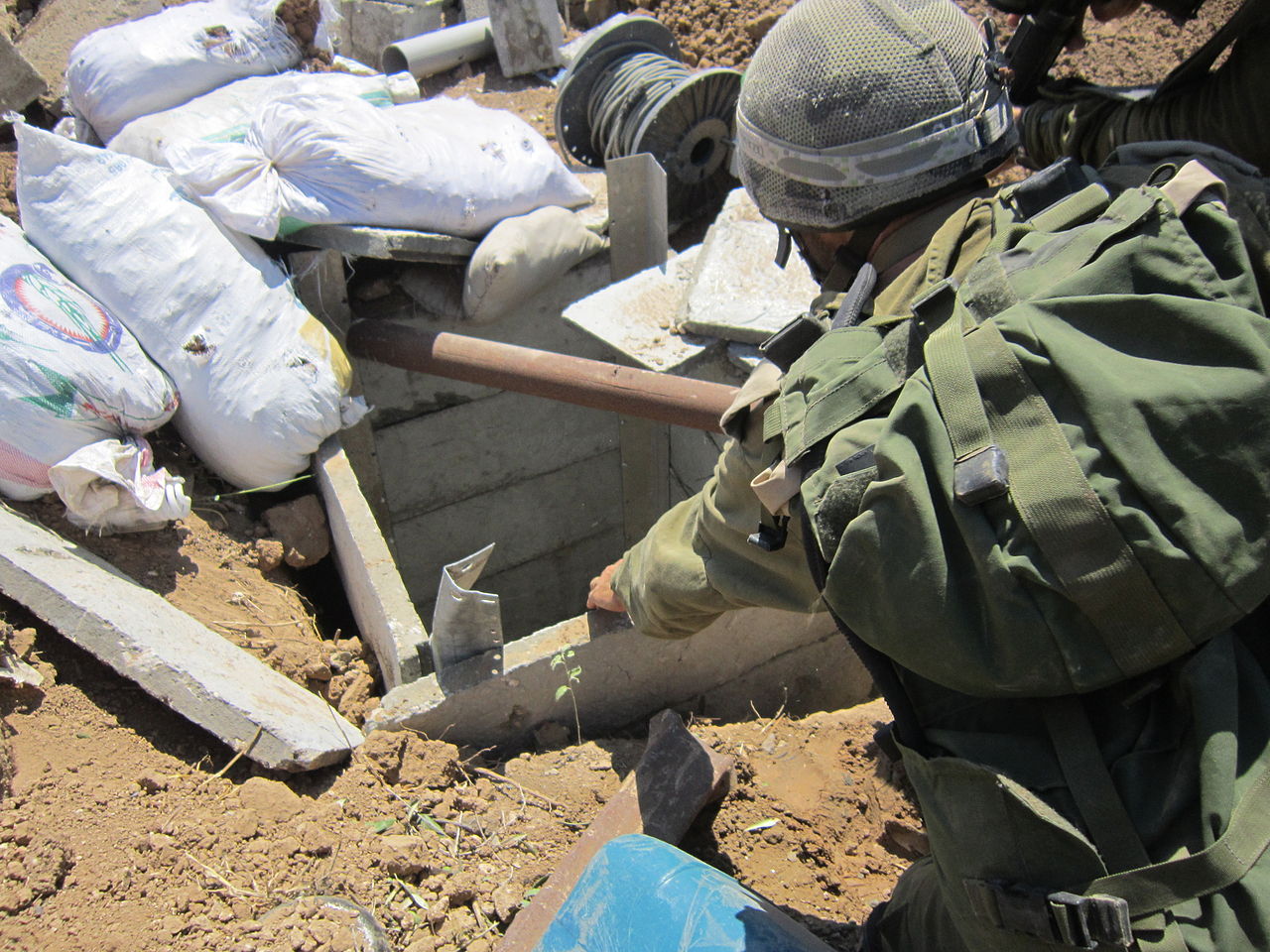 An IDF soldier peers into a Hamas tunnel in the Gaza Strip in July 2014. Photo by the IDF Spokesman Unit.

I’m grateful for the insightful responses to “What Now for Israel?” by Robert Satloff, Amos Yadlin, Haviv Rettig Gur, and Michael Doran. I have a few general points to make, and I trust they will emerge as I reply to each of them in turn.

With Robert Satloff I have but one disagreement. It concerns my reference to Islam’s “pernicious teachings” about Jews. Satloff objects. “Islam, as such,” he writes, “is not the problem. . . . [T]he problem is with certain Muslims” and their leaders, who propagate them; if those teachings “ceased to be taught, they would also cease to exercise an impact.” But the anti-Jewish passages in the Quran are not imaginary, and they do constitute a problem. It would be a very good thing if Muslim leaders were to repudiate them; if that day is far off, it is in part because the words in the text are so very strong.

On the issue of Israeli settlement activity, by contrast, Satloff and I are in agreement. As he notes—and he is the rare commentator who does take account of this fact—most new construction is done in areas that “even the Palestinians recognize will eventually be part of Israel.” But some construction is taking place beyond the security fence, in areas that in any two-state solution would be part of a Palestinian state. Like Satloff, I regret this and think it a mistaken policy.

Just as Robert Satloff taxes me with “missing . . . the element of Israel’s agency,” Amos Yadlin urges that even though the status quo with the Palestinians is in fact sustainable, it is nevertheless undesirable and should be changed—by Israel. Well aware of the risks involved, Yadlin observes that modern Zionism itself has “always represented a high-risk strategy,” but one that has paid off. He therefore counsels Israel to “shape its own borders” in the West Bank by claiming control over Jerusalem, the settlement blocks, and the Jordan River while “renouncing its formal claims to political sovereignty in areas where very few Israelis reside.”

In essence, this means setting the security fence as a political border, and the Jordan River as a military border, for an interim period that could last years or decades. This is close to what I believe Ariel Sharon would have pursued had he not become incapacitated in January 2006, and I understand the logic of it. But as Yadlin is aware, even this display of “will and determination” will not work unless it has the support of the United States, which today it does not. So this is a discussion Israel should have with the next American administration.

Yadlin further advises that Israel actively seek to relieve suffering and poor governance among the Palestinians, but he is vague as to how this might be achieved. His idea that Israel “shape its own borders” will not get us there, either. But here’s a suggestion: while waiting for new and friendlier leadership in Washington, Israel might do more to promote economic progress in the West Bank, something Yadlin does not mention but would I believe support. The Netanyahu government has taken a number of steps in this direction, but much more could be done to promote business activities and help alleviate poverty. Moreover, such initiatives can be fostered under Yadlin’s criterion of unilateral, Israeli-driven action and do not depend for their success on the dysfunctional Palestinian Authority.

Would these and other actions improve Israel’s own position, as Amos Yadlin believes? Haviv Rettig Gur is more pessimistic. Given the parlous security situation in the region, Israel is understandably not about to relinquish military control of the West Bank and the Jordan River; and this, Gur states plainly, means that a fully sovereign Palestinian state is not possible. Under these circumstances, which could last a long time, Palestinians would enjoy limited home rule, but that would be seen neither by Israel’s enemies nor by its friends as constituting the desired “two-state solution.” Even if many Arabs and even some Palestinians may privately think Israel’s security judgments are reasonable, the country will suffer a great blow internationally if it is understood to be rejecting Palestinian independence. As Gur puts it: “it is one thing to struggle and fail to achieve peace, quite another to renounce the struggle altogether.”

His argument is powerful, especially since, outside the United States and Canada, Israel’s friends are in any event few and beleaguered. Gur reminds us what Israel is up against in the “international community.” In those precincts, Palestinian demands for a fully sovereign state trump any consideration, however correct, of the very real danger that would be posed to both Israelis and Palestinians by an Israeli departure from the West Bank.

Gur is offering a warning to his countrymen, not a solution: either keep control of the West Bank and risk a further loss of international support and legitimacy or relinquish control and risk national security. Since Israelis will not do the latter, they must cope with the former. To me, this conclusion would seem to strengthen Yadlin’s argument that Israel can benefit by acting—within, to be sure, the constraints imposed by security needs. Not because this will solve the issue, but because it provides evidence of the underlying truth: Israel does not wish to rule the Palestinians but, when it can be done safely, to separate from them.

It may seem unfair and even absurd to Israelis and their supporters that Israel has to keep proving this point, but if it can do so without sacrificing safety, it’s a sensible course. To phrase it somewhat differently: if, as I believe, the status quo will be sustained for a long time to come because no alternatives are in fact safe, actions that reaffirm Israel’s continuing desire for a better situation someday, with Palestinian self-government in roughly 90 percent of the West Bank, are wise policy.

Here Michael Doran offers some sound advice. According to his analysis of the overall state of play in today’s Middle East, the United States has an opportunity both to strengthen a new alliance of status-quo powers, an alliance that includes both Israel and our Arab allies (Egypt, Jordan, and the Gulf states except for Qatar), and to weaken our opponents in the Iranian and Syrian regimes, Hizballah, and the various Sunni terrorist groups including Hamas and Islamic State. The U.S., Doran writes, should seize that chance.

He is equally persuasive when it comes to the Israeli-Palestinian situation. A final peace agreement being far away, a “more modest and productive approach” should aim at a more stable and more autonomous entity in the West Bank under what he calls a “code of conduct.” In keeping with that code of conduct, Israel would limit settlement growth to the major blocks—the same advice offered by Robert Satloff—while moving steadily toward more Palestinian control in areas now fully or partially under Israeli control. I’m sure Doran would agree as well on other measures meant to improve life in the West Bank, for example by significantly upgrading the currently poor Internet access there, a move that would enable greater collaboration between Israeli and Palestinian companies and in general help stimulate economic growth.

In sum, and taken together, my essay and the responses to it suggest three conclusions.

First, the status quo between Israel and the Palestinians is likely to be sustained for the foreseeable future, for the simple reason that a full Israeli withdrawal from the West Bank is safe neither for Palestinians nor for Israelis. That being the case, the demand for a comprehensive final-status agreement is unrealistic and should not be the goal of American policy today.

Second, this situation creates real political vulnerabilities for Israel, leaving it open to inevitable accusations of seeking permanent dominion over the Palestinians. Accordingly, if, without undue security risks, there are steps Israel can take to improve its own political situation and Palestinian welfare at the same time, it should do so.

Third, Israel, most of the Arab states, and the United States have a strong common interest in resisting the advance both of terrorist and jihadi Sunni groups and of the Iranian-led alliance. These threaten us all. Thus, instead of pursuing policies that divide—by, for example, seeking an accommodation with Iran, or pushing for an unattainable Israeli-Palestinian peace—Americans should grasp and run with this opportunity to rebuild our relations with Middle Eastern friends while strengthening relations among themselves. Michael Doran is right to remind us that in addition to asking “What now for Israel?” we should be asking, “What now for the United States?”

Elliott Abrams is a senior fellow for Middle Eastern studies at the Council on Foreign Relations, where he maintains a blog, Pressure Points. He is the author of Faith or Fear: How Jews Can Survive in a Christian America (1997) and, most recently, Tested by Zion: The Bush Administration and the Israeli-Palestinian Conflict.