Indignation at Israel’s response to Russia’s invasion has intensified while becoming ever more untethered from the facts. 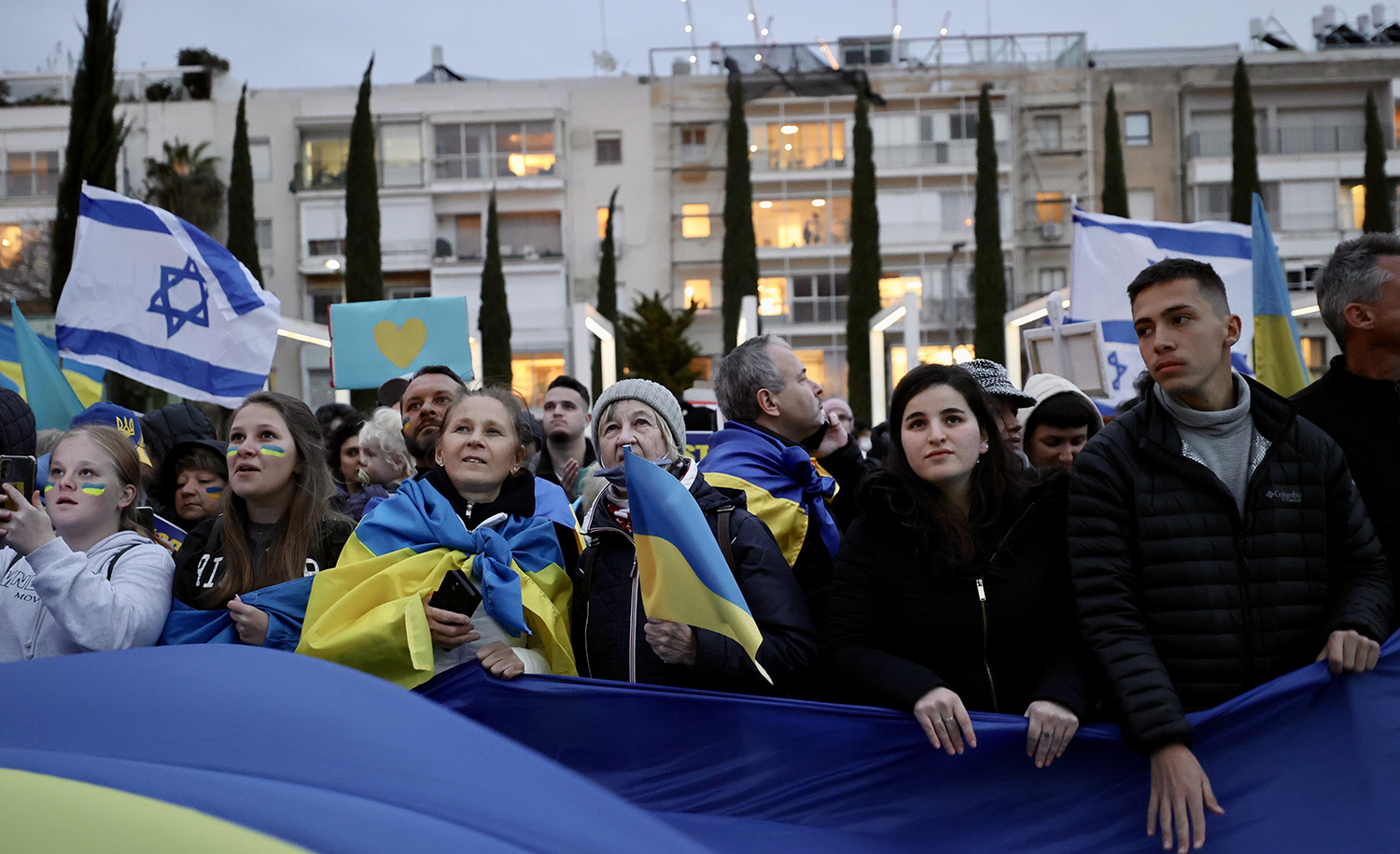 A pro-Ukrainian demonstrator in Tel Aviv on March 20, 2022. JACK GUEZ/AFP via Getty Images.

Observation
Evelyn Gordon
About the author

Like many Israelis, I wasn’t very happy with my government’s initial response to the war in Ukraine. Since then, the policies have improved, but criticism of how Israel has responded to Russia’s invasion has only intensified, while becoming progressively more untethered from the facts. Consequently, it’s worth taking a closer look at the substance of this criticism and its merits—if any.

To take one glaring example, consider the outrage over Israel’s refusal to give Ukraine its defensive anti-missile system, Iron Dome. The Ukrainian president, Volodymyr Zelensky, has raised the subject repeatedly, most recently in his speech to the Knesset on March 20. “Everyone in Israel knows that your missile defense is the best,” he pleaded. “You can definitely help us protect our lives.” Members of the American Congress have also raised the issue. Representative Adam Kinzinger, for instance, said that Washington should pressure Israel to provide the system, adding, “Israel’s reaction to Ukraine will have bearing on future aid from the U.S. to Israel. Pay it forward.”

As many senior Israeli defense officials have pointed out, Iron Dome would actually be of little help, for two reasons. First, it was designed specifically for Israel’s needs—protecting a small territory against relatively unsophisticated missiles fired from comparatively close range. It is not designed to protect a vast expanse of land against high-tech missiles fired from far away, which is what Ukraine needs. Second, it’s difficult to use, and those operating it would need about a year of training. Consequently, it would be useless unless Israel also sent soldiers to operate it on the battlefield—something no country has been willing to do.

But beyond these practical issues, there’s a moral one. Numerous countries have anti-missile systems. Some, like America, make their own; others purchase them from abroad. Yet Israel is one of very few that regularly uses its system to defend itself from neighbors that periodically launch missiles at it. Its supply of Iron Dome interceptors is already badly depleted due to last May’s rocket barrages by Hamas, which is why Congress recently approved a special allocation to help it purchase more. And Israeli defense officials are already warning about the possibility of renewed violence this spring.

Consequently, giving Ukraine some of its limited stock of Iron Dome batteries and missiles would leave Israel’s own population vulnerable. And no government has a moral right, let alone a duty, to protect another country at the expense of protecting its own citizens. By contrast, less immediately threatened countries could give their anti-missile systems to Ukraine without endangering their own populations. None of them have. Yet for some reason, there has been no public outcry over other countries’ refusal to provide missile defense systems to Ukraine.

This argument applies to other weaponry, too. Unlike the many Western countries that are (laudably) arming Ukraine, Israel actually needs its limited supply of arms to defend its own population. That’s exactly why America provides Israel with such generous military aid—not, as Kinzinger seems to think, to give Washington a deniable way of arming third countries, but to enable Israel to defend itself by itself.

Now consider a very different issue: Israel’s policy on Ukrainian refugees. Here, the criticism was at first justified; the Interior Ministry’s initial demand that Ukrainian Israelis post financial guarantees on behalf of relatives fleeing the war was unconscionable. But the outcry against this from Israelis themselves soon forced the ministry to draft a much more reasonable policy.

The change to the rules hasn’t abated the criticism one whit; Israel is still being slammed as a racist country that wants only Ukrainian Jews and turns away non-Jews. In his Knesset speech, for instance, Zelensky said he was pleading “for basic visas.” But the actual policy is nothing like this caricature. It divides refugees into three categories:

Nor should this last datum be surprising. Ukrainian refugees are welcome in most European countries, where they can stay for three years and receive generous benefits. Many of those countries also have large Ukrainian communities. So why would Ukrainians want to move to a faraway, Hebrew-speaking country where they know no one—especially since Israel, unlike most of Europe, is a place where traumatized war refugees could soon find themselves under missile attack once again? That’s why even many Ukrainian Jews prefer staying in Europe. As one told Ha’aretz, “I was afraid because it was a country where war also happens regularly.”

So why even have a cap? Because it’s a bone Interior Minister Ayelet Shaked can throw to her anti-immigrant base. Personally, I’d scrap it; it looks terrible and serves no purpose. But it doesn’t change the fact that, contrary to its critics, Israel is preparing to accept tens of thousands of non-Jewish Ukrainian refugees; it is already accepting the vast majority of those who actually want to come here; and even the handful it has turned away aren’t being left in danger, since all are coming from European countries where they are welcome to stay.

By way of comparison, consider that President Biden is now being lauded for pledging to accept 100,000 Ukrainian refugees, or 0.03 percent of America’s population. Israel, as of last week, had taken in 8,978 Ukrainians not eligible to immigrate, plus 6,223 who are. Counting only the former, this means that as a percentage of its population, Israel has already accepted three times as many refugees (0.09 percent) as America’s upper limit. Its policy simply prioritizes the refugees most likely to come in the first place—people already eligible to immigrate or who have family here.

Next, there’s the accusation that Israel refuses to take sides in the war. That is simply false. Granted, Israel refused to sign a UN Security Council statement condemning the Russian invasion—a completely meaningless gesture, since Israel is not, and never has been, a Security Council member. But in the forum where it actually has a vote, the General Assembly, it voted for a resolution condemning the invasion and demanding that Russia withdraw. Incidentally, 52 other countries did not. Five voted against, 35 abstained, and twelve skipped the vote. That’s what sitting on the fence actually looks like.

Israel has also promised not to serve as a channel for evading sanctions on Russia; consequently, Russian Jewish oligarchs now desperately seeking Israeli domiciles are finding it almost impossible to close deals. It’s providing humanitarian aid, including in areas where its own wartime experience gives it special expertise, like trauma training for Ukrainian mental-health professionals. Last week, it became the first country to open a field hospital in Ukraine. And Israeli officials have repeatedly condemned the invasion in speeches and statements, though admittedly often without mentioning the perpetrator, thereby echoing the mealy-mouthed formula most countries employ in condemning attacks on Israel.

I despise that formula; I think perpetrators should be called out. I also think Israel should have signed the Security Council statement, because even rhetorical support has some value. But to claim that Israel is refusing to take sides because it uses standard diplomatic language for its condemnations or confines its UN activity to forums where it actually has a vote is ludicrous.

Finally, there’s its relationship with Russia. Much has been written about Israel’s need to operate in Syria, where Russia controls the airspace, as part of its long-term strategic contest with Iran. That is undeniably important. But two other issues often get overlooked.

First, these operations also have a short-term purpose: Iranian and Hizballah cells periodically launch missiles and drones at Israel from Syria, and many Israeli operations there are aimed at preventing such attacks. Consequently, a situation where Russia used its airpower in Syria to thwart those operations would pose a direct and immediate danger to Israel’s own population. And that’s true even if Israeli aircraft and missiles could outmaneuver Russian defenses (an as-yet unproven claim), since doing so would be far harder than bypassing Syria’s antiquated defenses and would therefore almost certainly result in more Israeli losses. Nor is Israel the only country that factors risk to its own citizens into its decisions; see, for instance, America’s veto on Poland providing Ukraine with MiG fighters lest this provoke Russian retaliation against NATO.

Second, there’s one sanction on Russia that Israel genuinely does flout: the aviation boycott. That’s because Russia has a large Jewish population (Della Pergola puts the “core” Jewish community at 150,000 and the number eligible to immigrate under the Law of Return at 600,000), and thousands have already expressed interest in moving to Israel due to the war. They aren’t being bombed, but they do risk long prison sentences if they dare to protest against the government, impoverishment from sanctions and, for those of the right age, possible forced conscription into Russia’s military. Providing a refuge for any Jew in need is one of Israel’s raisons d’etre. It has repeatedly struck deals even with enemy countries to get Jews out; it cannot and should not ban flights from a country with which it’s not at war as long as there are Jews who need to leave.

The bottom line is that much criticism of Israel over Ukraine has been either unjustified or disproportionate to its actual policies; on many issues, like not giving Ukraine Iron Dome, it is being criticized for doing exactly what other Western countries do. I won’t speculate on the motives for this. But it’s something Israel’s critics ought to ask themselves.