What Reactions to the Death of Shireen Abu Akleh Reveal

The belief that Israel has a policy of assassinating reporters has, explicitly or tacitly, now been accepted by much of the liberal world. 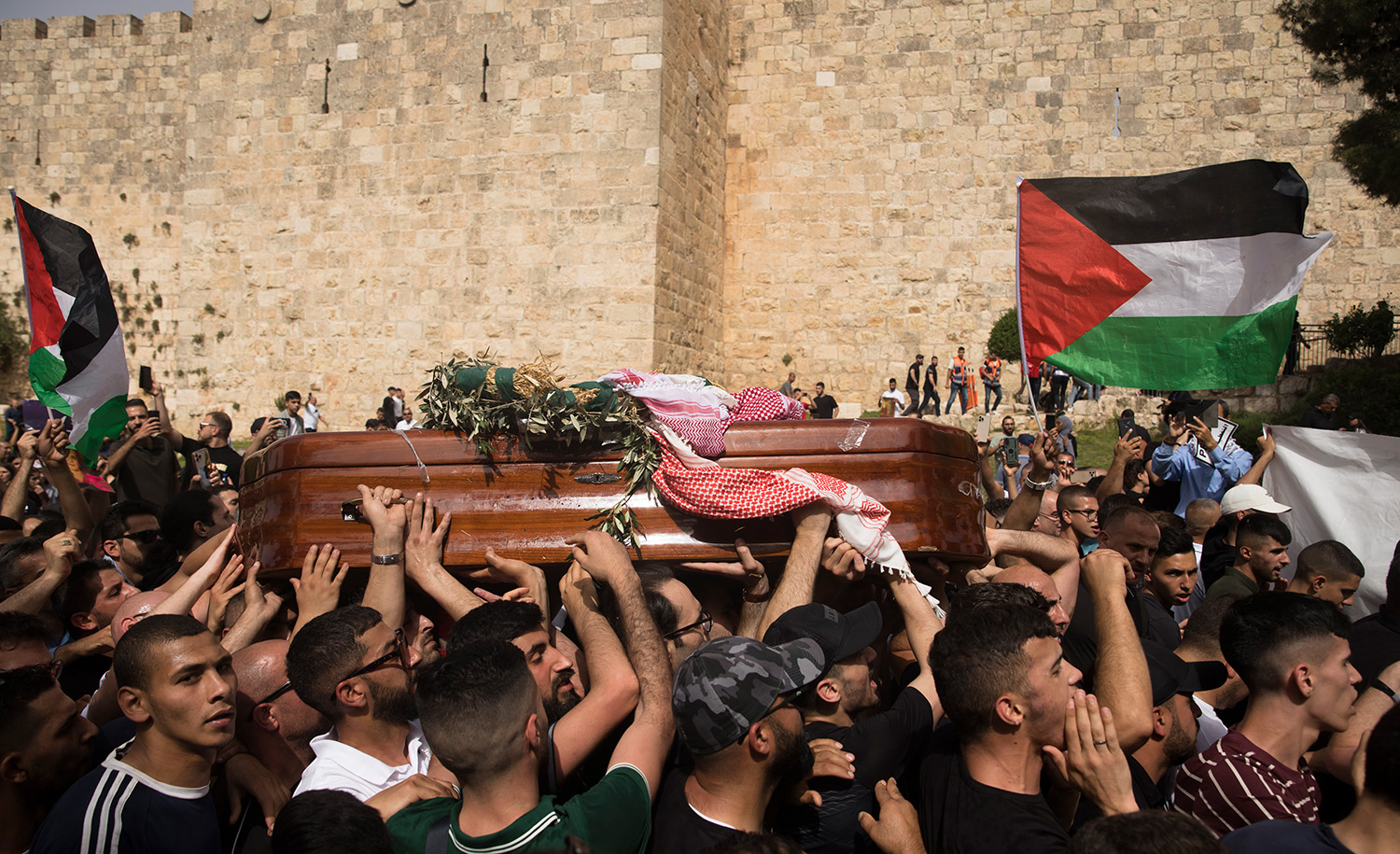 Observation
Michael Oren
About the author


Michael Oren, formerly Israel’s ambassador to the United States, a member of the Knesset, and a deputy minister for diplomacy, is the author of the forthcoming Swann’s War.

The death of war correspondents rarely makes headlines, but that of Shireen Abu Akleh has been front-page news for weeks. A well-known Palestinian-American reporter for Al Jazeera TV, the fifty-one-year-old Abu Akleh was tragically shot during a battle between Palestinians and Israeli troops in the West Bank city of Jenin on May 11. When, two months earlier, the Fox News photographer Pierre Zakrzewska and Ukrainian cameraman Oleksandra Kuvshynova were struck down by a Russian barrage in Kyiv, the story lasted a day. But even that coverage exceeded the attention given to almost all the 2,658 journalists, eleven of them from Al Jazeera, killed in combat since 1990. The reason is simple: taking risks is part of a war correspondent’s job. “If your pictures aren’t good enough,” the famed war photographer Robert Capa wrote, “you aren’t close enough.”

By contrast, the shooting of Abu Akleh has become the focus of prolonged press, governmental, and UN action. The White House, the U.S. Congress, and virtually every major American news outlet have repeatedly addressed it. How can the intense interest in one particular journalist be explained when the killing of so many of her colleagues was scarcely noted? What made her death so different?

The May 11 battle took place following the murder of nineteen Israelis by Palestinian terrorists, many of whom belonged to the Islamic Jihad branch in Jenin. Having lost security control of the city, the Palestinian Authority willingly stepped back to allow for the entry of Israeli forces who were met with overwhelming small-arms fire and explosive devices. While covering the clash, Shireen Abu Akleh died instantly after being struck in the head by a bullet. Another Palestinian journalist, Ali Samoudi, was wounded. Although Israel at first blamed the terrorists, it later admitted the possibility that one of its troops might have accidentally shot the reporters. The IDF immediately mounted an internal investigation headed by a senior intelligence and technical officer. The Palestinian Authority, on the other hand, refused to release the bullet—5.56 caliber, the type used by the IDF but also by many Palestinian terrorists—that purportedly killed Abu Akleh. The Palestinian prime minister Mohammad Shtayyeh explained, “Those who fabricated the history of a people,” referring to the Jews, whose history he believes is imaginary, “can also fabricate a narrative.”

A narrative was in fact being fabricated, but not by Israel. Abu Akleh, Al Jazeera claimed, had been “assassinated in cold blood,” and the Palestinian attorney general Akram al-Khateeb stated that Israel had killed her “deliberately and directly.” Francesca Albanese, the UN’s special rapporteur on Palestine, called Abu Akleh’s death “yet another serious attack on journalism . . . in the occupied Palestinian territories and a “potential war crime.” Despite the reporter having “press” emblazoned on her helmet and flak jacket—the narrative maintained—the Israelis obviously shot her, and many reporters before her, on purpose.

Overnight, the case of a war correspondent killed in a crossfire—an occupational hazard elsewhere—became the grounds for accusing Israel of homicide and even the premeditated execution of journalists. Of course, if they’d intended to, Israeli soldiers would have little difficulty targeting those standing close by, exposed and unarmed, and clearly marked as the press. But, in fact, fewer correspondents have been killed covering the fighting between Israel and the Palestinians over the past 30 years than in the first five months of the Ukraine war. The narrative nevertheless took root and soon spread to much of the Western media.

At least five major outlets, among them CNN, the Washington Post, and the New York Times, launched large-scale investigations of the incident. Unlikely to have been undertaken if the Palestinians were to blame, the studies proceeded with an assumption of Israeli guilt. They all but overlooked the murder of the nineteen Israelis and the terrorists’ Islamic Jihad affiliation while focusing almost exclusively on the IDF incursion into Jenin. Decontextualized, the studies were already disposed to find Israel culpable of Abu Akleh’s death, which, with various degrees of intentionality, they did. They reached these conclusions without even glimpsing the key evidentiary bullet.

The investigations might have depleted the media’s fixation on Abu Akleh, but then Western governments stepped in. The United States, where the reporter held citizenship, was especially strident. On May 20, 57 members of Congress and nearly half of the Senate Democrats—together with the Republican Mitt Romney—insisted that “justice be served” and “accountability” assigned by a “full and transparent” FBI probe. Secretary of State Anthony Blinken acceded to this request on June 8 by announcing the establishment of an “independent inquiry” into the Abu Akleh affair.

Consequently, three weeks later, State Department experts arrived in Ramallah where they were finally allowed to examine the bullet. This, the experts found, was too damaged to determine which gun, Israeli or Palestinian, had fired it. Still, the State Department declared that Israeli troops, however unintentionally, were “likely responsible for the [reporter’s] death.” Israeli officials seethed; the United States had not only disrespected their military and judicial system, but publicly indicted their soldiers. Yet Israel’s anger paled beside that of the Palestinians, who instantly accused Washington of a whitewash.

Palestinian rage figured prominently in President Biden’s meeting with the Palestinian Authority president Mahmoud Abbas on July 15. This took place before a large photograph of the late journalist, in front of journalists wearing Abu Akleh t-shirts, and in the presence of her family. President Biden again insisted on a “full and transparent accounting” of the incident, presumably by Israel. He pledged “to stand up for media freedom everywhere in the world,” as though Israel had denied that freedom. Abu Akleh’s family was invited to the White House.

More than two months after her death, the name Abu Akleh remains very much in the news. Such notoriety is partially due to the iconic status she has achieved among Palestinians and their supporters. But the far more significant factors are where Abu Akleh was killed, and who is alleged to have killed her. In no other war zone and by no other army would a reporter’s death be so extensively—and one must say obsessively—covered. No other country’s army and judiciary would be so condescendingly dismissed by its fellow democracies, including its closest ally, and its troops found guilty without trial or definitive evidence. The lamentable death of one war correspondent does not justify this radical departure from precedent. Far more than a single war correspondent’s death, the issue is the Jewish state.

Israel is once again being held to a double standard. During the 2003 Iraq War, for example, the United States routinely refused to investigate the killing of journalists by its military. American commanders, wrote Palestinian journalist Daoud Kattab, “made it clear that they were not responsible for the fate of freelancers who were not embedded with the U.S. army.” The International Holocaust Remembrance Alliance states that “requiring of Israel a behavior not expected or demanded of any other democratic nation” is a form of anti-Semitism. Yet double standards alone cannot account for the overwhelming press and governmental response to Abu Akleh’s death. Something else, far darker, is happening.

The belief that Israel has a policy of assassinating reporters has, explicitly or tacitly, been accepted by much of the liberal world. How else to explain a recent Washington Post report that likened Abu Akleh’s death to that of Jamal Kashoggi, the Saudi journalist murdered and dismembered in the Saudi embassy in Istanbul? On what other grounds would the Atlantic, a liberal bellwether, have published an article by a Palestinian-American journalist comparing Israel to the Pakistani Islamists who kidnapped the Wall Street Journal correspondent Daniel Pearl in 2002? Pearl, the article fails to mention, was tortured, beheaded, and cut into ten pieces.

Lurking in these and other articles is the assumption that Israel is waging a brutal war against journalists. The fact that Israel consistently loses that war—that the killing of reporters covering the Israel-Palestine conflict only increases the media’s focus on it—only reenforces that assumption. For who but a cruel and rapacious people would murder not for gain but merely for the sake of vindictiveness? Like the age-old accusations that Jews kidnap Christian children and use their blood for obscene rituals, the charge that Israel deliberately killed Abu Akleh and other innocent correspondents reflects an image of Jews as demonic. The suppression of free speech by annihilating those who champion it thus joins the lengthening list of sins—colonialism, racism, apartheid, genocide—cited to erase Israel’s legitimacy.

Even if the IDF does take responsibility for Abu Akleh’s death, apologizes, and compensates her family, their contrition is unlikely to alter or even to mitigate this trend. On the contrary, it will probably elicit charges of coverup and renewed claims of Israeli barbarity. Coverage of Abu Akleh’s death further evinces the sad fact that Israel is not judged in the court of public opinion for what it does, but for what it is: toxic.

It’s hard not to see how the poison spreads. The sharp rise in anti-Semitic incidents in the United States, all statistics show, is increasingly driven by anti-Zionism. The treatment of the Abu Akleh incident by many in the media and the government only fans that hatred. What began with a tragic accident in the streets of Jenin could conclude with deliberate attacks on the synagogues and day schools of America.

What Reactions to the Death of Shireen Abu Akleh Reveal