When one Jewish summer camp “bombed” another with leaflets excoriating its lack of commitment to Hebrew and Zionism. 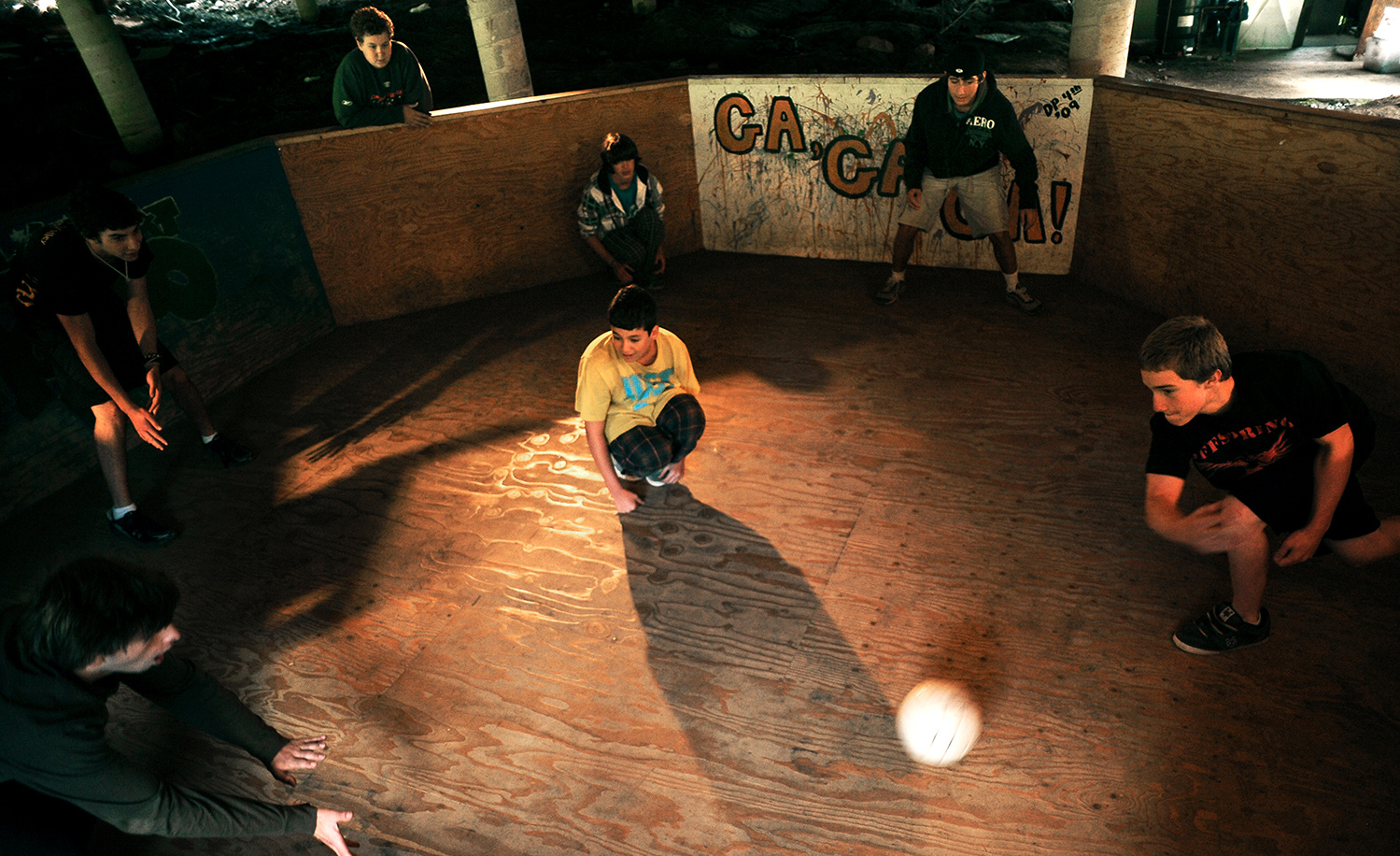 On first association, the phrase “Hebrew Infusion” suggests either a Jewish herbal tea or an IV in a Jewish hospital. One wouldn’t think of it as the title of a book on Jewish camping.

Yet this is what Hebrew Infusion: Language and Community at American Jewish Summer Camps is. Despite its seemingly odd title, its three authors, the sociolinguists Sarah Bunin Benor and Sharon Avni, and the historian Jonathan Krasner, have written a lively account of the rise and decline of the Hebrew summer-camp movement in America in a clear and jargon-free prose such as contemporary academic writing is not generally known for.

What is “Hebrew infusion?” As used by Benor, Avni, and Krasner, it is contrasted with “Hebrew immersion,” each denoting a different approach to, and historical stage of, Hebrew summer camps in the U.S. Immersion came first. Pioneered by Camp Cejwin, established in New Jersey in 1919, and best represented by Camp Massad, found in the Pocono Mountains of Pennsylvania in 1941, and Camp Yavneh, which got its start in southern New Hampshire in 1944, Hebrew-immersion camps aimed at creating a total environment in which everything, from bonfires to baseball games and from the admonishments of counselors to the conversations of campers, was conducted in a modern, Palestinian/Israeli Hebrew with American embellishments when necessary. (One could not rely on the Hebrew of Tel Aviv for words for Texas bloopers or double plays.) Only thus, it was believed, could Hebrew become a living language for young American Jews rather than a medium confined to the pages of sacred texts and the prayer book.

The heyday of Hebrew immersion was in the late 1940s, the 50s, and the 60s, after which enrollments in its summer camps began to drop. (Massad, the largest and most successful of these, shut down the last of its three U.S. camps in 1981, though it still exists in Canada.) Hebrew infusion was what replaced it. This was, as Benor, Avni, and Krasner call it, “Camp Hebraized English” or CHE—that is, ordinary English peppered with Hebrew words. The most successful example of CHE camping has been the Conservative movement’s Ramah network, which was launched in Wisconsin in 1948 and today has ten camps all over the United States, from Clayton, Georgia to Ojai, California.

And yet, as the authors of Hebrew Infusion point out in two long chapters on Massad and Ramah that comprise most of the first, historical part of their book, Ramah began as a Hebrew-immersion camp, too. In its early years, indeed, a high percentage of its counselors were Massad alumni. It drew on the Massad experience in many ways and sought to differentiate itself from Massad not by downgrading Hebrew but by emphasizing Judaism more and Zionism less, and by taking a more progressive approach toward camp administration and counselor-camper relations than Massad’s “This is how we do things and how we expect you to do them too” attitude.

From the start, however, as Benor, Avni, and Krasner explain, Ramah suffered from contradictions that undermined immersion Hebrew. If the emphasis was on Judaism, not Zionism, why was speaking Hebrew rather than simply acquiring a written literacy in it, as Jews had contented themselves with doing throughout the ages, so important? And if the campers’ feelings and desires counted as much as a counselor’s, why make them state them in a language they were far from articulate in? To be sure, few of Massad’s campers could initially speak Hebrew well either, but their backgrounds—most came from Orthodox day schools—gave them a considerable head start.

And so already in the 1950s, our authors write of the Ramah camps, “Hebrew infusion, rather than immersion, increasingly became the norm, especially beyond public spaces like the dining hall and the ball field. This trend . . . became more pronounced by the mid-to-late 1960s and 1970s, so that by 1989, the contributors and editors of Ramah’s 40th-anniversary volume dispensed [even] with the pretense that Ramah camps remained Hebrew-speaking.” Long before that, these camps had switched to CHE, with its many Hebrew words like ts’rif (bunk), ḥadar okhel (dining room), hashkamah (reveille), aruḥat boker (breakfast), tiyul (hike), and so on. Though Ramah campers might know dozens or even hundreds of these, they rarely used them in an actual Hebrew sentence.

Today, Benor, Avni, and Krasner write, CHE has become the universal norm in those summer camps that choose to stress Hebrew at all, and Part 2 of their book is a descriptive analysis of the various ways in which CHE is promulgated in camps with different ideological and religious outlooks. Yet though this account is informative, it breaks no new linguistic ground. After all, apart from its Israeli rather than East European pronunciation of Hebrew words, a sentence like “After hashkamah let’s go right to the ḥadar okhel for aruḥat boker, because we have a long tiyul ahead of us” is ultimately no different from the Yeshivish utterance quoted in my column of two weeks ago, “He caused a lot of nezek [harm], but l’basoif [in the end] he was moideh b’miktzas [admitted partial responsibility] and claimed it was b’shoigeg [unintentional].”

Nor is such speech different from the English that one frequently hears spoken by ex-Americans living in Israel, who routinely say things like “I have to go to the makolet [grocery] and the do’ar [post office] and then pick up my granddaughter at her gan [kindergarten] and bring her older brother to his ḥug [afterschool activity].” You’ll encounter such talk among immigrants everywhere, whose borrowed vocabulary, as is the case with CHE, consists mostly of nouns, which are easier to slot into the structure of a borrowing language than are verbs, adverbs, and prepositions.

Having myself been a camper at Ramah’s inaugural summer in Wisconsin in 1948, gone to Massad for five summers from 1949 through 1953, and worked as a counselor at Ramah’s Ojai camp in 1956, I was led down memory lane by the chapters on both camps. Of the two, Ramah proved to be the more influential. True, Massad produced two generational cohorts of partly or wholly Hebrew-speaking American Jews, many of whom went on to be Jewish educators and not a few of whom settled in Israel, but except for its contribution to Ramah,  it cannot be said to have changed American Jewish life. Ramah, in serving as a flagship of the Conservative movement and providing it with much of its rabbinical and lay leadership, did just that.

Still, there’s no denying that Massad was the more original and by far the more eccentric of the two places. Its somewhat zany fusion of Hebrew, Israel, Zionism, and Americana actually worked, and even the authoritarianism that Ramah sought to do away with, by whose lights not speaking Hebrew was a punishable crime, created a rare esprit de corps among its campers, who rebelliously spoke English to one another when no counselors were around.

Massadniks’ fierce attachment to Hebrew and Zionism, however, was real. As Hebrew Infusion observes, “For Massad’s leaders striving to create a microcosm of Israel at camp, Ramah’s failure to embrace overtly an ideology that linked Hebrew to the Zionist project and its apotheosis in the establishment of Israel seemed inexplicable. Even more infuriating to them was the prevalence of Massad alumni among Ramah’s founders, senior staff, and counselor force. Ramah’s ideological deviation felt like an act of betrayal because former Massad insiders had perpetrated it.”

All of which explains why one summer, as Hebrew Infusion relates, “A cadre of Massad counselors and staff informally known as the ‘Massad mafia’ raised money from their coworkers and rented a light aircraft and a pilot. Three members of their group—Abie Kraushar, Ray Arzt, and Rabbi Louis Bernstein—flew over the Ramah camp and ‘bombed’ it with 500 leaflets excoriating Ramah for its alleged anti-Zionism. Arzt, who could recognize Ramah from the air, acted as the spotter, while Kraushar threw the leaflets out the window. As for Bernstein, the most anxious of the three, his job was to sit in the back of the plane and recite t’hilim (psalms). Unfortunately for the Massad mafia, the wind carried all of the leaflets into the woods, and few if any at Ramah actually witnessed the strafing because it occurred while lunch was being served in the dining hall.”

I knew Ray Arzt as a wonderful basketball player and superb comic rather than as a navigator, and Rabbi Louis Bernstein was none other than Massad’s beloved “Screwy Lewie,” as he was frequently referred to. The whole incident was vintage Massad. You couldn’t imagine Massad being similarly attacked from the air by Ramah—to which, ironically, Arzt later deserted.

That’s all ancient history now—as are the years in which speaking Hebrew was taken seriously, even passionately, by at least some American Jews. Today, when Israelis and American Jews meet, they talk in English, which has become the international language not only of the world but of the Jewish people, whereas spoken Hebrew has been relegated to the status of one more provincial tongue, used by Israelis among themselves. It certainly doesn’t seem worth wasting a child’s summer on.