Remembering "Operation Wedding," the Event That Kick-Started the Movement to Free Soviet Jewry

In June 1970, fourteen Soviet Jews tried to steal an airplane to fly themselves to freedom. A new documentary marks their story—and Natan Sharansky reminisces. 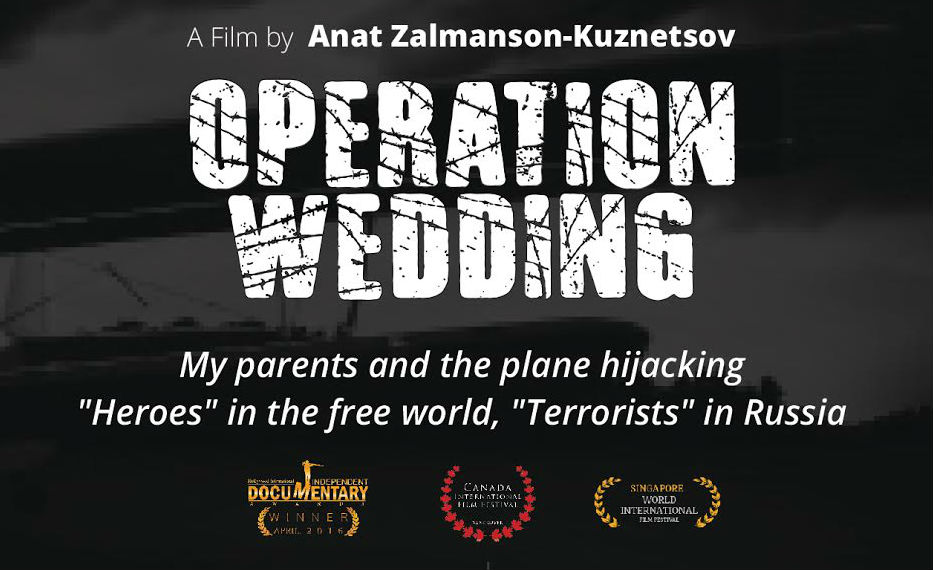 Observation
Dore Feith
About the author


Dore Feith is a senior at Columbia University, where he studies history and Arabic.

In June 1970, fourteen Soviet Jews who had been refused permission to emigrate tried to steal an airplane to fly themselves to freedom in the West. Led by Edouard Kuznetsov and Mark Dymshits, the group had spent months plotting their move.

The hijackers, claiming to be traveling together to a wedding—hence “Operation Wedding,” the name of their scheme—had bought all the seats on the small aircraft to ensure there would be no one but themselves on board. They intended to subdue the pilots non-lethally and leave them on the side of the runway, having provided sleeping bags to keep them warm until rescued. Dymshits, a former Red Army pilot, would fly the plane.

When they arrived at the small airstrip outside of Leningrad, KGB agents were waiting to arrest them.

The sensational news spread throughout the Soviet Union, reported first by Voice of America and then by Pravda. Some Soviet Jews reacted with dread; others felt proud and emboldened. At the time, Jews in the Soviet Union numbered approximately 2.5 million. Religious practice was restricted, the teaching of Hebrew was banned, and Zionism was branded a subversive ideology. Small groups of Jews were meeting in secret to preserve what remained of their religious and national identity. Although many had begun to apply for exit visas—at risk of losing their jobs or even their friends—most were denied. The Soviet government strictly curtailed emigration in general, and by 1970 had barred Jews altogether from leaving for Israel.

The trials of the would-be hijackers were closed, although activists did what they could to follow the proceedings. Dymshits and Kuznetsov, the ringleaders, were sentenced to death. But the international outcry—protest marches were held in Paris, London, and New York, and other forms of pressure were brought to bear as well—the Soviet leader Leonid Brezhnev commuted their sentences to fifteen years apiece.

Yesterday, Operation Wedding, a documentary about the hijacking directed by Anat Zalmanson-Kuznetsov (the daughter of Kuznetsov and Sylva Zalmanson, another participant in the plot) received its New York premiere at Columbia University. In anticipation of the screening, which was arranged by my student organization, I recently interviewed Natan Sharansky, who at the time of the hijacking had been a twenty-two-year-old mathematics student in Moscow. I was curious about his recollections of this incident, which would launch his own career as the world’s most famous Soviet Jewish dissident and later “prisoner of Zion.” We spoke in Jerusalem, where since 2009 he has served as chairman of the Jewish Agency.

The thwarted hijacking, Sharansky tells me, influenced him more profoundly than any other event apart from the Six-Day War of 1967. He had been unaware of the underground Zionist movement that developed in Riga and Leningrad in the 1960s, so the deeds of Kuznetsov and his co-conspirators were his first indication that some Jews were actually fighting for any opportunity to leave for Israel and willing to take extreme risks in the attempt. His reaction, he says, was typical of countless other Soviet Jews dreaming of emigration and afraid of saying so. In a society where anyone could be a KGB informant, no reasonable person could be expected to take a chance of speaking out.

Soviet officials tried to discredit the hijackers by hauling notable Jewish dancers, professors, and scientists to press conferences to insist that they would never think of leaving Mother Russia and to denounce the very idea of emigration as a capitulation to Western anti-Soviet propaganda. But in doing so, Sharansky says, the regime inadvertently admitted that the Jewish dissident movement had grown into a significant force and was creating a serious problem. At the same time, news of the demonstrations abroad protesting the treatment of Dymshits and Kuznetsov raised Soviet Jews’ consciousness of Western activism on their behalf. Such evidence of global sympathy gave them hope and courage. This was the moment, Sharansky recalls, that propelled his own move “from simply reading underground books to starting to do something.”

Sharansky spent much of the next seven years—before he himself was arrested, tried and convicted on a trumped-up charge of espionage, and sentenced to thirteen years at forced labor—as a spokesman for the budding movement of “refuseniks,” helping to publicize the names of Kuznetsov, Dymshits, Yosef Mendelevich, Sylva Zalmanson, Hillel Butman (who helped plan but did not participate in the operation), and others. Once in prison, he received a message that Mendelevich and Butman were being held in the same compound. They themselves were unaware that anyone had been campaigning for their release. As Sharansky recalls, “Mendelevich and Butman wrote in their first note to me, ‘You probably don’t know us, but . . . ’.” Laughing now at the irony, he shakes his head: “heroes. . . .”

Much as it inspired Soviet Jews, Operation Wedding also further encouraged Western Jews to pressure their governments to pay attention to the plight of their brethren behind the Iron Curtain. Although organizations like the Student Struggle for Soviet Jewry had existed for several years, the hijacking, and Sharansky’s subsequent efforts, stirred support on the part of Jewish communities in the U.S. and elsewhere that would have a decisive influence on, especially, American diplomacy in the 1980s. “This fight would not have endured if it did not become the fight of all the Jews in the world,” Sharansky notes, emphasizing that it was the combined efforts both inside and outside the USSR that in the early 1990s produced the final, dramatic outcome with the collapse of the Soviet Communist regime and the opening of the gates.

A decade after his 1986 release to the West in a prisoner exchange, followed the same day by his departure for Israel and reunion with his wife Avital, Sharansky would travel to post-Soviet Russia to negotiate trade agreements as an Israeli government minister. While there, he insisted on visiting the notorious Lefortovo prison where he had been held. On exiting the place, he surprised waiting journalists by reporting that his re-encounter hadn’t been painful in the least. “To the contrary, it’s a most inspiring moment,” Sharansky remembers saying to them. The prison once symbolized “the most powerful dictatorship in the world,” and that dictatorship’s “most sinister secret police, the KGB, were explaining to me that Zionism was finished, that world Jewry was afraid to mention our names.” But now “the Soviet Union doesn’t exist. The KGB doesn’t exist. Two-million Jews have left the Soviet Union. More than one million are in Israel now. And the world is a much more secure place.”

As for the animating impulse behind the American Jewish movement in support of Soviet refuseniks, it was not a matter of ideology, Sharansky explains. It was about family. “An American Jew would think, ‘My father left [pre-Soviet] Russia and his brother stayed there. And now by chance I am lucky and he is not, so of course I’ll help him.’” Moreover, he adds, American Jews had told themselves, “never again will we be silent as we were during the Holocaust.” This was their chance to prove it.

Sharansky laments that others have not been similarly motivated. Why don’t Saudi or Korean communities in the West demonstrate en masse on behalf of their relatives trapped in oppressive societies? Consider, he says, the case of Raif Badawi, the Saudi blogger sentenced in 2014 to ten years in prison and 100 lashes. “I didn’t see any demonstrations on American campuses,” Sharansky says. Where today is the sense of kinship to Badawi, similar to what tied American Jews 30 years ago to Soviet Jews they had never met?

Similarly, he recalls that during his incarceration in Lefortovo, Ukrainian and Armenian inmates had asked him resentfully why there were Western protests for Jewish prisoners but not for them. “How many millions of Ukrainians are in America?,” Sharansky remembers asking them. “Why are there no demonstrations for Ukrainian political prisoners? You could make a big change.”

In our conversation, Sharansky reflected on the significance of the hijacking and its resonance for today:

The USSR was the biggest dictatorship in the world, which killed tens of millions of its own citizens in order to have full control over the brains of the two-hundred million. [Then] a small group of Jews excited by [the Six-Day War] rediscovered their identity. . . . We were assimilated—not everybody was [an observant Jew like] Mendelevich. I was one of those many Jews for whom the word Jew was only negative, an anti-Semitic slur. Here we discover that we have a history that we want to be a part of. That we have a Jewish people who want to be part of us and we want to be part of them. And we have the state of Israel. It gave us the strength to fight.

“We were insisting,” Sharansky says, “on bringing down the Iron Curtain.” Without that barrier between the USSR’s subjects and the world, “the Soviet Union couldn’t survive.” And so it came to pass. “Not only did a million Jews become free, but so did the entire Soviet people.”

So often on college campuses today, students are instructed that concern with one’s family or group or nation is parochial and even bigoted. Sharansky’s story, and that of the movement on behalf of Soviet Jewry, shows the opposite: such concern with one’s own is not only natural but moral, and can make the world a better place—as happened when the Soviet Jewry movement contributed to the end of Soviet tyranny.

Of course, it helps enormously to have a hero or two, or more, to lead the struggle. In this connection, I couldn’t help being struck in our interview by Natan Sharansky’s own tremendous affection and admiration for the Soviet Jews who preceded him in the fight for free emigration. Even a hero has heroes.

Remembering "Operation Wedding," the Event That Kick-Started the Movement to Free Soviet Jewry