No, the Book of Joshua Does Not Tell of a Rare Solar Eclipse

Despite the claim of two recent scientific papers. 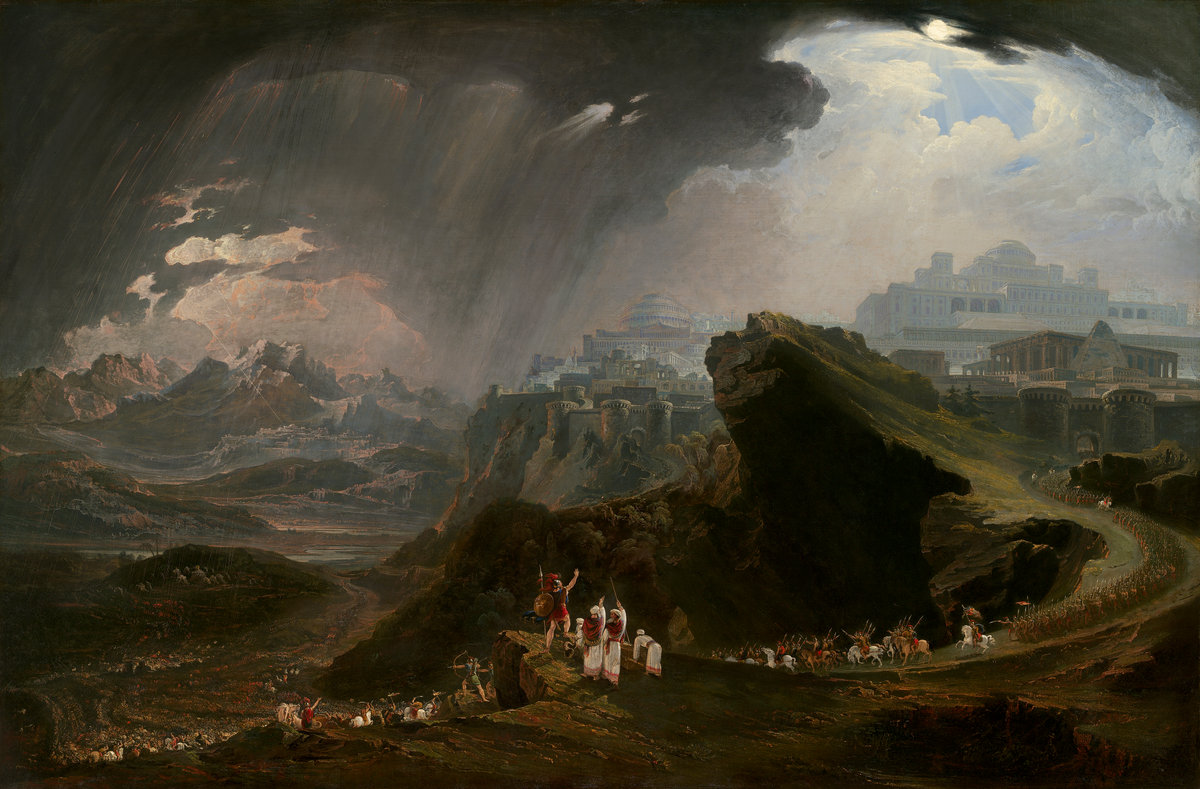 Some of you may have read about an article written by the British physicists Colin J. Humphreys and W. Graeme Waddington and published in the October issue of Astronomy & Geophysics. Titled “Solar Eclipse of 1207 BCE Helps to Date Pharaohs,” it’s an attempt to link the story of the sun’s miraculously standing still in the biblical book of Joshua to an ancient eclipse and to draw historical conclusions from the linkage.

I will get to the substance of Humphreys and Waddington’s thesis, which has received considerable press coverage, in a moment. First, though, I need to point to something that has gone mostly unremarked upon (an exception is a post by Professor James Davila in his blog PaleoJudaica), namely, that these researchers’ argument is practically identical to that of a much longer and more detailed paper published in January of this year, in the Hebrew journal Beyt Mikra, by three Israelis: the physicist Ḥezi Yitzḥak, the Bible scholar Daniel Vainstub, and the archeologist Uzi Avner. Such coincidences can happen in the world of scholarship and perhaps need not be made too much of, provided that credit goes to where it is due.

In any case, my remarks in this column will refer to both articles as though they were one. The relevant verses in Joshua 10:5-14 are, in the King James Version, as follows:

Therefore the five kings of the Amorites . . . encamped before Gibeon and made war against it. And the men of Gibeon sent unto Joshua to the camp to Gilgal, saying, Slack not thy hand from thy servants; come up to us quickly and save us. . . . And so Joshua ascended from Gilgal, he and all the people of war with him. . . . Joshua therefore came unto them suddenly, and went up from Gilgal all night. And the Lord discomfited [the Amorites] before Israel and slew them with a great slaughter at Gibeon and chased them along the way that goeth up to Beth-Horon, and smote them to Azekah. . . . And it came to pass as they fled before Israel that the Lord cast down great stones from heaven upon them unto Azekah, and they died. . . . Then spake Joshua to the Lord . . . and he said in the sight of Israel, Sun, stand thou still upon Gibeon; and thou, Moon, in the valley of Ayalon. And the sun stood still and the moon stayed until the people had avenged themselves upon their enemies. . . . So the sun stood still in the midst of heaven, and hasted not to go down for about a whole day. And there was no day like that before or after it.

Let us summarize. Joshua comes to the Gibeonites’ rescue because there is a pact between them and the Israelites. Marching at night from Gilgal in the Jordan Valley to Gibeon, the biblical Giv’on, in the hill country north of Jerusalem, he surprises the Amorites at the break of day and drives them westward to Azekah in the Judean lowlands, killing them along the way with the assistance of a violent hailstorm. As the day is not long enough for him to finish them off—ancient armies rarely fought at night—he prays for the sun to stop in its tracks, together with the third-quarter moon that is visible in the western sky when the sun is overhead. (The Valley of Ayalon lies to Gibeon’s west.) This they do, prolonging the daylight until the last of the fleeing enemy is cut down.

Such has been the traditional—and, it must be said, the self-evident—understanding of the story. Now, though, along come two teams of Israeli and British scientists and claim that the story in the book of Joshua has been read wrong: its description, they say, is not of a sun and moon that halted in the heavens but of a solar eclipse. What, apart from the understandable but not logically compelling desire to give the biblical story a natural rather than a supernatural explanation, are their reasons?

Essentially, stripped of supporting considerations, those reasons boil down to a new look at two Hebrew verbs, damam and amad, that occupy the center of the biblical narrative. Damam occurs in it twice, once in its imperative form of dom in the phrase shemesh b’Giv’on dom, “Sun, stand thou still upon Gibeon,” and once in its past-tense form of vayidom in vayidom ha-shemesh, “And the sun stood still.” Amad also occurs twice, the first time in v’yare’aḥ amad, “and the moon stayed,” and the second time in vaya’amod ha-shemesh b’ḥatsi ha-shamayim, “So the sun stood still in the midst of heaven.” The King James translation is consistent with the use of these verbs elsewhere in the Bible, in which amad generally means “stand,” with the secondary meanings of “halt” or “cease,” and damam means “fall silent,” though it can also can mean “stay in one place” or “perish.”

And yet, our two articles contend, this is not their meaning in the book of Joshua. Why? Because in the astronomical terminology of Akkadian, the ancient and long extinct Semitic language of Babylonia, da’amu refers to the darkness of an annular eclipse, in which the screened sun is encircled by a narrow ring of light, while emedu signifies the conjunction of two heavenly bodies, as when the path of the moon intersects that of the sun and blocks our vision of it.

Since mathematical calculations show that a rare annular eclipse took place in the skies of central Palestine, where Gibeon and the Ayalon valley are located, on October 30, 1207 BCE, Joshua’s prayer, assuming that da’amu and emedu influenced Hebrew damam and amad, must thus be understood to have been, “Sun, be thou eclipsed upon Gibeon and thou Moon, in the valley of Ayalon”—following which, we are told by the Bible, “the sun was eclipsed and the moon stood in conjunction [with it].” Although this eclipse lasted barely an hour-and-a-half from beginning to end, the Bible tells us that the sun “hasted not to go down for about a whole day”—because, write Humphreys and Waddington, “to the awe-inspired Israelites, the amazing spectacle in the sky would have appeared to be long and drawn out; the reaction to such events tends to be exaggerated, particularly with regard to perceived duration.”

This explanation of the story in Joshua, our scholars argue, has great historical significance. In the first place, by corroborating (while reinterpreting) the Bible’s account, it strengthens the case for the veracity of other biblical stories that are commonly considered legends or myths, including that of the Israelite conquest of Canaan in Joshua’s time. Secondly, it enables us to date when this conquest took place—i.e., toward the end of the 13th century BCE, exactly where biblical chronology places it. And thirdly, it establishes a terminus a quo for the Egyptian hieroglyphic inscription known (after the pharaoh Merneptah) as the Merneptah stele; inasmuch as a people called Israel is mentioned there as being in Canaan in Merneptah’s time, which it could not have been prior to the age of Joshua, the solar eclipse of 1207 contributes to a more precise dating of events in ancient Egypt as well.

I confess to being skeptical about all this. Not that it is totally implausible. Akkadian, the language of a Middle Eastern colonial power in the biblical period, did influence other Semitic languages, Hebrew among them, and a knowledge of it can sometimes help in understanding biblical words that are unclear.

An example of this is the kikayon plant in the book of Jonah, whose rapid growth, the Bible relates, shaded Jonah from the torrid sun while he waited outside the city of Nineveh to see what would happen to it. Biblical commentators had no idea what plant this was until modern times, when Assyriologists (a term that includes scholars of Akkadian) unearthed cuneiform tablets in which the word kukkanitu, from which kikayon undoubtedly derives, denotes the castor-oil plant. It is thus possible that Babylonian astronomical terms like da’amu and emedu entered biblical Hebrew, too, especially since the Babylonians were acknowledged by their neighbors to be unequalled as astronomers.

But it is one thing to invoke the aid of Akkadian in explaining a biblical word or passage whose meaning we do not know, and quite another to do so with a passage, like the one in Joshua, that is self-explanatory and needs no outside assistance to be understood. The only reason to read an eclipse into it, as I have said, is wanting to make a biblical account scientifically credible; but to believe that something is true because we want it to be true is hardly scientific.

More than that: the Humphrey-Waddington-Yitzḥak-Vainstub-Avner thesis needs to be taken with a tablespoon of salt not only because it isn’t needed to make sense of the biblical account but because it makes nonsense of that account. Although Joshua, let us recall, prays for a miracle that will prolong the hours of light until his forces have completed their mission, a solar eclipse would only have lessened these hours, and at a time of year—the end of October—when the days were already short. Asking God for it would have made Joshua one bumbler of a general.

This is something that our British and Israeli scholars do not appear to have thought of. It’s not enough, in interpreting the Bible, to know Akkadian and astronomy. You also have to know how to read a simple story.

No, the Book of Joshua Does Not Tell of a Rare Solar Eclipse