What Really Happened at Masada?

The desert fortress has become a powerful symbol of Jewish resistance. A new book examines the evidence to see how much of the story, including the famous mass suicide, is true. 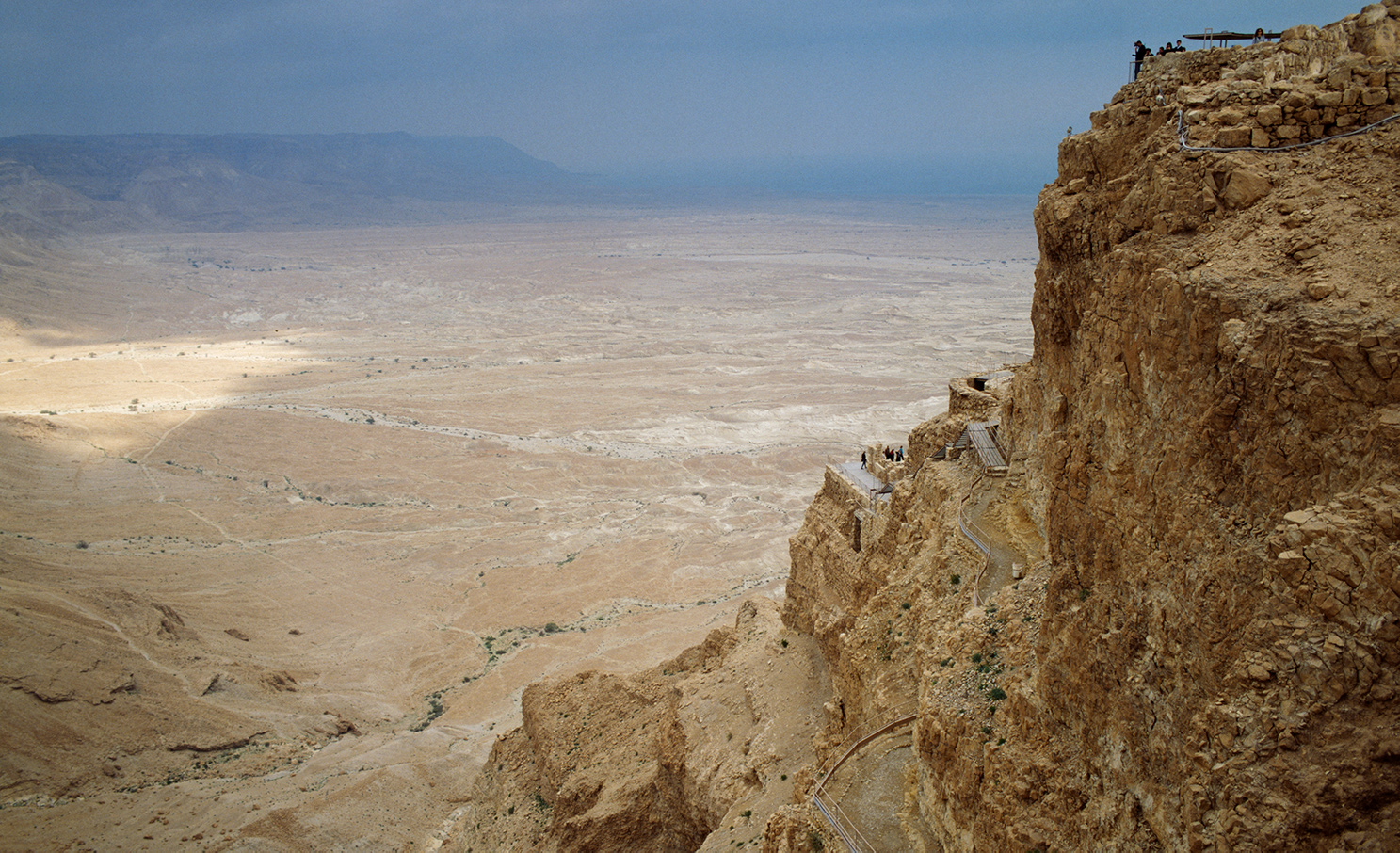 Observation
Matti Friedman
About the author

If you’ve read the popular account of the Masada dig by the famed Israeli archaeologist Yigael Yadin, published in 1966, you probably remember the scene where the author finds three skeletons in the ruins of Herod’s desert palace “upon the steps leading to the cold-water pool.” One skeleton, lying by the remains of military armor and a prayer shawl, was a young man, “perhaps one of the commanders of Masada.” The second was a young woman remarkably preserved in the dry climate: “Her dark hair, beautifully plaited, looked as if it had been freshly coiffured,” and by her head was a stain that looked like blood. The third was a child.

“There could be no doubt that what our eyes beheld were the remains of some of the defenders of Masada,” Yadin wrote. The three, in his unforgettable account, were victims of the final battle and mass suicide for which the site is renowned.

But were they? The flat hilltop on the western shore of the Dead Sea remains one of Israel’s top tourist sites and the subject of fascination. Everyone knows Masada, everyone hikes the Snake Path or takes the cable car to the top, and everyone knows what’s supposed to have happened. But outside the world of archaeologists, few know what we really know.

To the rescue comes Jodi Magness in her new book, Masada: From Jewish Revolt to Modern Myth. Magness, a prominent archaeologist and a professor at the University of North Carolina, studied when young with the great Yadin and now oversees the fruitful, though less famous, dig at Huqoq in Galilee.

The Masada story, as it’s generally known, goes like this: Herod the Great, famous for colossal building projects (and for murdering his own relatives) built a grand winter palace there around 31 BCE. Nearly a century later, in 66 CE, when the Jews revolted against their Roman overlords, a contingent of rebels known as the Zealots fled to the palace and held out as the rest of Judea succumbed.

After subduing the province and torching the Jerusalem temple, Roman soldiers marched into the desert to besiege this last fortress. As the troops advanced inexorably uphill, the rebels decided on death instead of surrender and slavery. At a final council, they drew lots to decide who would kill whom. The last one standing killed himself, and, aside from the briefly successful Bar Kokhba revolt in 132-136 CE, Jewish sovereignty in the Land of Israel was snuffed out for nearly two millennia.

In Zionism’s early years, that story helped turn Masada into a powerful symbol. But it’s been a rough few decades for Zionist symbols, and for the Masada mythology. Many scholars now doubt that a mass suicide of Jewish defenders actually occurred; despite Yadin’s best efforts, the archaeological evidence remains ambiguous. The only source for the story is Josephus Flavius, the Jewish rebel commander turned Roman historian who described the event in rousing, gory detail in his The Jewish War. He left us a precise number—967—for the men, women, and children who died on the hilltop as the legions broke through. But no mass grave has ever been found, and no other account has come to light.

In Masada, Magness does an admirable job of explaining to a general audience where current scholarship stands: an especially valuable service to a reader who, like me, might know the story but couldn’t quite tell you where the line runs between evidence and wishful thinking. Magness comes neither to mythologize nor to myth-bust, but rather to explain what she and her colleagues have actually found in the soil, what can reliably be said to have happened, and what will have to remain unresolved.

From the start, the Masada story was never solely about scholarship. “The example of Jews putting up a heroic resistance to the death instead of going meekly to their slaughter had a great appeal in the wake of the Holocaust and at a time when Israel’s population felt embattled,” Magness writes. And Yadin wasn’t just an archaeologist but also a Zionist leader and an army general whose Masada dig was as much about symbolism as it was about science. Youth groups used to hike up the hill for inspiration. Army recruits were sworn in near the ruins. For a while, before Israelis became queasy about glorifying mass suicide, the slogan “Masada Will Not Fall Again!” was popular.

Yadin wasn’t the only one with motivations beyond pure research. Josephus, who preceded Yadin as chronicler of the site (but who seems never to have been there), may well have had his own reasons for telling things the way he did. The dramatic suicide elevated not just the Jews, his people, for their religious and national ardor, but also the Romans, his new patrons, who could thus be portrayed as prevailing against a fanatical enemy. The suicide made everyone more heroic.

If you come to the site assuming that the Josephus account is true, as Yadin did, you’ll find evidence—like those three dramatic skeletons by the pool—to support it. But if you discard that account you might conclude, like another archaeologist, that the skeletons were just a jumble of bones dragged into a corner of the palace by hyenas. If you think the suicide happened as Josephus describes, with the rebels drawing lots, then ceramic shards inscribed with Hebrew names will seem like those lots. But if you’re a skeptic you might conclude that the shards had to do, more prosaically, with the distribution of food.

Magness weighs the evidence and reaches a responsible conclusion: “I am often asked if I believe there was a mass suicide at Masada,” she writes, “to which I respond that this is not a question that archaeology is equipped to answer.” Despite the desire for a tale of heroic sacrifice, such a tale might be an invention or an exaggeration. And yet, despite the modern fashion for debunking anything that smells like heroism, it could also be true.

Equally memorable, in Magness’s book, are the insights unconnected to the controversy. For example: although the Masada rebels are usually referred to as Zealots, the Greek term for one Judean faction, the dominant party on the hill was actually the Sicarii (Latin for “daggermen”), a nastier group whom Magness, channeling Josephus, describes as “urban terrorists.” This rebel sect didn’t fight only the Romans. In 68 CE, about five years before the fortress finally fell, Josephus recounts, they massacred hundreds of their fellow Jews in a raid on the nearby town of Ein Gedi.

The Sicarii were part of the internecine fighting that tore Jerusalem apart before the Romans even breached the city walls, in a civil war between competing gangs of Jewish extremists that killed and starved thousands. This has been played down in the official story, it seems, to make the rebels more sympathetic and the narrative simpler. (For some readers, learning this might actually have the effect of encouraging a certain sympathy for Rome.)

What stands out most for me is the human details that have been gleaned in digs over the years, small fingerprints adding up to a vivid picture of the chaos at the doomed fort. We learn, for example, that Jewish refugees fleeing to Masada subdivided Herod’s royal suites into hovels as the palace became a warren of squatters. A reception hall next to the throne room was turned into a shop for manufacturing arrowheads. Another room became a bakery.

Once the king’s food stores were used up, the rebels ate simple bread, oil, beans, and lentils, and also rotten dates and figs that (as we know from forensic tests) were infested with insects and larvae. Concerned with ritual purity, they built mikvehs, ritual baths, in accordance with the same religious regulations still in use today. They also fled to Masada with their scrolls, including the familiar biblical books of Genesis, Leviticus, and Psalms. Refugees who might have been Essenes from nearby Qumran came with one of their extra-biblical texts, Songs of the Sabbath Sacrifice.

Among the Jewish women taking refuge on the hill, we learn from ceramic shards, was a certain Shalom the Galilean, as well as “the daughter of Domli” and “the wife of Jacob.” They wore hair nets that seem to have been dyed to match the color of their hair. As the end approached, a couple named Joseph and Miriam somehow found time to get divorced; the religious paperwork, or get in Hebrew, was found in a cave nearby. A child left a sock.

More detail comes from the Roman army camps, their outlines still visible beneath the hill, built by Tenth Legion soldiers and auxiliaries commanded by Flavius Silva: hobnailed military sandals, the cheek-guard of a helmet, bronze scales from armor worn by light infantry, triple-pointed arrows. Potsherds inform us of the presence of legionnaires named Aemilius, Fabius, and Terentius. A grunt named C. Messius of Beirut left behind a military pay slip. One papyrus fragment tells us that someone was reading Virgil’s Aeneid.

In other words, although the suicide story inevitably draws much of the attention around Masada, it might be a distraction: there’s more than enough drama if we just stick to what we know for sure. It seems to me that the most important finds are the evocative traces left by both sides, reminders that it was humans not very different from ourselves who were overtaken by the tragedy at Masada 1,946 years ago, whatever the precise details of that tragedy may have been.

Jodi Magness has gone to the trouble of making these traces accessible to readers beyond the small world of professional scholars. All those interested in the site, or planning a visit, will find their understanding enriched by her clear and readable guide.

What Really Happened at Masada?