Is the Language Abraham Spoke Engraved on an Ancient Lice Comb?

For the first time, a whole sentence in ancient Canaanite has been found. Only six words long, it brings us many words closer to the age of the Patriarchs. 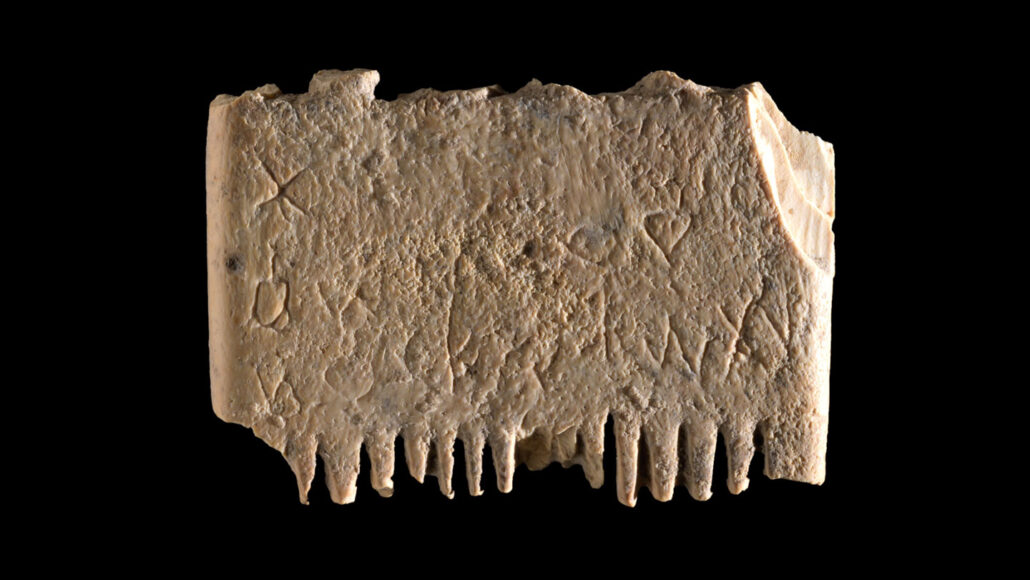 When, long ago, my two daughters were in elementary school in Israel, they not infrequently came home with itchy heads. “Lice again!” my wife and I would sigh and get to work. The first step was inspection. Although we rarely found living lice, the white specks of their eggs were generally visible. Next came a hair-wash with a special shampoo, an hour spent with the wet hair wrapped in a towel, and a careful combing to rake out the now dead eggs. It all worked pretty well and the itching went away until the next time.

Lice, and even delousing shampoos (the oldest formula for one has been found on an Egyptian papyrus from 1,500 BCE), have been with us immemorially, and special lice combs are among the most ancient surviving artifacts of civilization. Made of wood, bone, or ivory, and sometimes intricately decorated, known examples of them date back to pre-Pharaonic Egypt. Their basic form has not changed much over time. Squarish in shape, they have traditionally had two facing sets of teeth, thicker and fewer at one end of the comb for first unknotting and straightening the hair, and finer and more numerous at the other end for removing the lice and their eggs.

In itself, therefore, there was nothing earthshaking about the discovery in 2016, in an excavation at the site of Lachish in southern Israel, of a little ivory lice comb, 3.66 by 2.51 centimeters, dated by the experts to roughly 1700 BCE—that is, to about the time that the biblical Abraham was wandering up and down Canaan. What made the Lachish comb a news item upon publication last November of an article about it in the Jerusalem Journal of Archeology was that in 2021, five years after its discovery, an investigator examining it with special optical equipment noticed the presence on it of writing. When deciphered by paleographers, this turned out to be an inscription consisting of seventeen letters (two partly illegible that had to be guessed at) in the alphabet of ancient Canaanite, the language that was the precursor of biblical Hebrew just as the Middle English of Chaucer’s time was that of the English we speak today.

Run together rather than separated into discrete words, these letters represent an extremely early example of Canaanite writing—and since it was apparently the Canaanites, influenced by Egyptian hieroglyphics, who first hit on the idea of representing each of the sounds of their language by a distinct written character, thus leading to the world’s first alphabet, from which most of the alphabets in use today are descended, our little louse comb advances knowledge of the development of one of the most important inventions in human history.

But let’s leave the question of the alphabet’s origins for another day and look at the comb’s inscription, which comprises, according to the Jerusalem Journal of Archeology, the oldest complete Canaanite sentence ever found. Formed from the consonants (like biblical Hebrew, Canaanite was written without its vowels) y-t-sh-ḥ-t-th-l-q-m-l-sh-‘-r-w-z-k-t, its decipherment yields the words yatash ḥat tha le-qamal sha’ar wa-zakt.

Although even readers with a good knowledge of biblical Hebrew are likely to find this incomprehensible, it is not as removed from Hebrew as it might appear at first glance to be. Let’s examine it word by word:

Yatash: This is the Canaanite jussive form of the verb natash, to uproot or root out. The same verb occurs in the Bible in several places, such as Jeremiah, 45:4, which has God declare, “What I have planted I shall uproot [ani notesh].” The word’s meaning on the comb is “Let [the noun that follows] root out.”

Ḥat: This noun is not a word known from the Bible or from other ancient Semitic languages. Yet it does occur in the early rabbinic Hebrew of the Mishnah with the meaning of an animal’s front tooth or incisor, and it is not overly speculative to assume that it must derive from a biblical-age word that also denoted an elephant tusk or the ivory made from it. While a large number of Mishnaic words do not appear in the Bible, this is no reason to conclude that these did not exist in biblical times. The Bible’s vocabulary is limited and obviously does not include all the spoken Hebrew of its day.

Tha: The Canaanite word for “this,” postpositioned after its noun. Later tha morphed into the biblical (and modern) Hebrew zeh, “this” or “it.” The inscription’s first three words, therefore, mean: “Let this ivory [comb] root out.”

L-q-m-l: The prefix l’, while usually meaning “to” or “belonging to” in biblical Hebrew, can also sometimes introduce the direct object of a verb, as it more commonly does in Aramaic. In this case, the object of “root out” is qamal, lice, a Canaanite word related to biblical kinam (a collective form of kinah, louse), to ancient Akkadian kalmatu, louse, and to Aramaic kalmata, vermin. Now we have, “Let this ivory [comb] root out lice ”—or, in light of the next two words, “the lice of.”

Sha’ar: This is the same word as the biblical (and modern) Hebrew se’ar, hair.

Wa-zaqt: W’, the Canaanite and biblical conjunctive “and,” changed to v’ in post-biblical Hebrew. Zaqt is a variant form of biblical (and modern) Hebrew zakan, beard. The comb’s inscription now reads in its entirety:

“Let this ivory [comb] root out lice of the hair and beard.”

Was this the language Abraham spoke? Not, one supposes, to his wife Sarah: the two came to Canaan from Haran, today in northern Syria, whose language in 1700 BCE was ancient Aramaic, and to Haran from Ur in southern Babylonia, where Akkadian was spoken, and they would probably have talked to each other in one or the other. Yet to the inhabitants of Canaan Abraham would have spoken Canaanite, and perhaps to his sons Isaac and Ishmael too, since immigrant parents often use the language of their new country with their children. And we now have, for the first time, a whole sentence in it! Only six words long, it brings us many words closer to the age of the Patriarchs.

Is the Language Abraham Spoke Engraved on an Ancient Lice Comb?