At a critical juncture in the early 2000s, the White House adviser helped repair a fraying U.S.-Israel relationship. 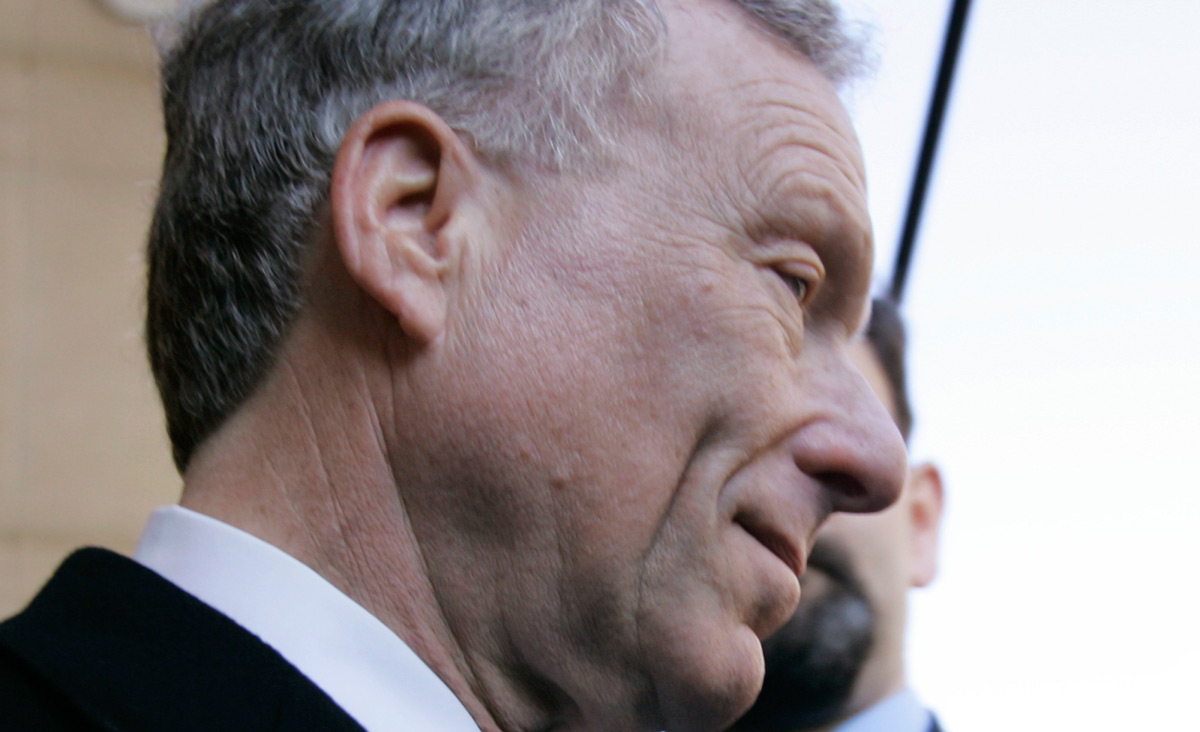 Observation
Arie Genger
About the author

On January 3, 2006, Prime Minister Ariel Sharon of Israel did something he had been meaning to do for a long time. Sitting in his office on the eve of his hospitalization for surgery, he picked up a copy of his autobiography, Warrior, and inscribed this message:

A dedicated servant to your country, a true friend, always there when needed!

The next day, a devastating stroke effectively brought Sharon’s life’s journey to a shocking end. As a friend and close adviser to the prime minister, I can’t help thinking that, in paying tribute to I. Lewis (“Scooter”) Libby, he had somehow sensed that, for him, it was now or never.

Libby, who during the early years of the George W. Bush presidency served as chief of staff and national-security adviser to Vice-President Richard Cheney, has been back in the news thanks to a recently published memoir by the veteran journalist Judith Miller. In it, Miller reveals that in 2007, she was tricked by the special prosecutor Patrick Fitzgerald into mistakenly incriminating Libby, thereby helping to convict an innocent man of perjury.

As others have written, Libby’s prosecution and conviction, in addition to dealing a crushing blow to his career and good name, robbed the American government of an exceptionally sage and courageous counselor. Until he was forced to resign in October 2005 following his indictment by a grand jury, Libby had vigorously lobbied for a change in strategy in the Iraq war—one that, prefiguring the 2007 “surge” by years, could have saved the lives of American servicemen.

Here, though, I want to write about a no less important contribution made by Libby in those years: years that happened to coincide with Ariel Sharon’s tenure as Israel’s prime minister.

The story of the two men’s relationship began shortly after Sharon was elected in February 2001, just weeks after George W. Bush had been sworn into office in Washington. In one of my early meetings with him as prime minister, “Arik” expressed his concern about how the new American administration would view him personally, what it would make of his plans for dealing with Palestinian terror—the second intifada, launched a few months earlier, was already in full force—and whether or not, amidst this turmoil, it would welcome his thoughts about how best to advance the cause of peace.

The following month, Sharon’s concerns were reinforced by his first, ill-prepared American visit. When it came to the Middle East, President Bush had entered office determined to reverse the foreign-policy hyperactivism, as he saw it, of the Clinton White House, and in particular to pursue an essentially neutral approach to the Israel-Palestinian conflict. In practice, and at a time when Palestinian terrorism was raging, the White House contented itself with deploring the “cycles of violence” for which it seemed to hold equally culpable both Palestinian terrorism and Israel’s response to that terrorism. As for Secretary of State Colin Powell and Condoleezza Rice, who was then the national-security adviser, it’s fair to say that both of them harbored doubts as to Sharon’s intentions, his direction, and his commitment to peace. In those quarters, the prevailing attitude might best be summarized as “respect him, but suspect him.”

Worried that poor relations with leading American officials would seriously complicate and endanger Israel’s position, Arik asked me to help establish a direct, private channel with the administration and especially with the White House. It was around then that, through a mutual friend in Washington, I met Scooter Libby.

As I soon learned, Scooter, too, was frustrated by the poor communication between Washington and Jerusalem. Researching Sharon on his own—he had by then read Warrior—he combed through Israeli and Palestinian public statements, studied intelligence reports, and sought out Clinton-administration officials to learn their view of the Israel-Palestinian impasse. From our first meeting on, Scooter became an invaluable partner and sounding board, taking the time to understand Sharon the man, the depth of his commitment both to the survival of the Jewish state and to realistic progress toward resolving the conflict with the Palestinians, and the nature of his strategic vision.

As time passed, Scooter and I regularly exchanged views and developed a strong U.S.-Israel strategic dialogue. He brought to these discussions tactical insights, knowledge of the region, and a nuanced grasp of American strategic interests. Intimately familiar with White House thinking, he was very inquisitive as to Arik’s real commitment to the peace process, his approach to stopping Palestinian terror, and his view of Yasir Arafat’s behavior and intentions. All this helped him assess the prime minister’s actions and test his “deliverables” over time.

Our talks soon led to a very friendly meeting with Vice-President Cheney at the White House, marking the beginning of a new period of mutual respect and trust. During his eight years as vice-president, Cheney again and again proved staunchly supportive of Israel’s security needs. In the meantime, Scooter also helped expand and improve my contacts with the National Security Council.

A watershed moment in U.S.-Israel relations, and in the evolution of American perception of Arafat as either an actual or potential “peacemaker,” came in January 2002. Israel had captured a ship, the Karine A, carrying 50 tons of Iranian arms for the PLO at the height of the intifada. With Cheney and Libby out of town, the State Department and National Security Council agreed on a course of action designed to retain America’s diplomatic outreach to Arafat. Returning to Washington at the last minute, Libby blocked the move while Cheney persuaded the president, who was already outraged at Arafat’s transparent duplicity, to take the measure of the arch-terrorist’s essential nature and speak out accordingly.

The following months saw further attempts, often led by the State Department, to persuade Bush to give Arafat another chance, even absent any evidence or assurance that he would change his ways. By March, Arab leaders were exerting their own pressure on Washington, asking in particular that the administration force Israel to end the “Arab humiliation” inflicted by its confinement of Arafat to his Ramallah compound. Meanwhile, many in the West were denouncing Sharon’s offensive to wipe out the PLO’s terror infrastructure in Jenin and its surrounding areas.

We know from insider accounts, and I know from my own day-to-day discussions with American officials, how central a role in internal administration debates during this crisis was played by Scooter’s and the Vice-President’s insistence that Arafat must be held to account. Those debates culminated in President Bush’s June 2002 speech announcing his refusal to deal any longer with Arafat and calling on the Palestinian people to “elect new leaders, leaders not compromised by terror, . . . [and] build a practicing democracy based on tolerance and liberty.” When that happens, the president concluded, the U.S. “will support the creation of a Palestinian state.”

Thereafter, Bush and Sharon were largely in agreement on the essentials of a new, no-nonsense approach to peace: ending terror, helping to build Palestinian civil society and responsible governmental institutions, and encouraging the formation of a viable Palestinian leadership that was prepared to make peace.

Throughout this often trying period, Scooter, together with Elliott Abrams, then a senior director of the NSC and special assistant to the president, sought to identify policies that would advance longer-term American interests in the region while resisting the perennial tendency of politicians and government officials to be swayed by momentary events or clamor from the media. Scooter was always there, always level-headed, always prepared to probe deeper for the facts and for the best judgment of those facts.

Needless to say, we did not always agree. How could we? Just as American and Israeli circumstances differ, so occasionally must their interests and positions. But I always knew our views were heard and that the U.S. understood our motives and our purposes. Whenever a difficulty arose, Arik’s standard question to me was “Have you had a chance to discuss it with Scooter?” Sometimes, those discussions led us to re-examine our own views.

By autumn 2003, Scooter was beginning to come under vicious attack for having allegedly leaked the name of a CIA agent. Thanks in part to Judith Miller, we now know definitively that he had nothing to do with the leak. (Apparently, the special prosecutor who led the charge against him knew this all along.) As the scandal unfolded, Sharon would repeatedly ask me how Scooter was holding up, and would just as repeatedly conclude: “Tell him to be strong.” Then came October 2005, and the news of his indictment. Arik was especially worried about Scooter’s family—how would they cope with the pressures that were certain to intensify? A few months later, just before the prime minister’s ability to express his feelings was brutally curtailed, he penned his note of appreciation to this brilliant, true, and courageous friend of Israel.

Judith Miller’s re-playing of the record should remind us of the price paid by the loss of Scooter’s Libby’s voice in the formation of American policy during the Iraq war. It has certainly reminded me, and impelled me to remind others, of the truly momentous role he played, and would have continued to play, in strengthening and cementing the relations between America and Israel at a crucial juncture in their history. Now that the true facts have been made public, one can only hope that Scooter’s reputation and honor will be restored, and that he will receive the gratitude he so richly deserves.