An open letter to fellow students who want to write about Israel and anti-Semitism. 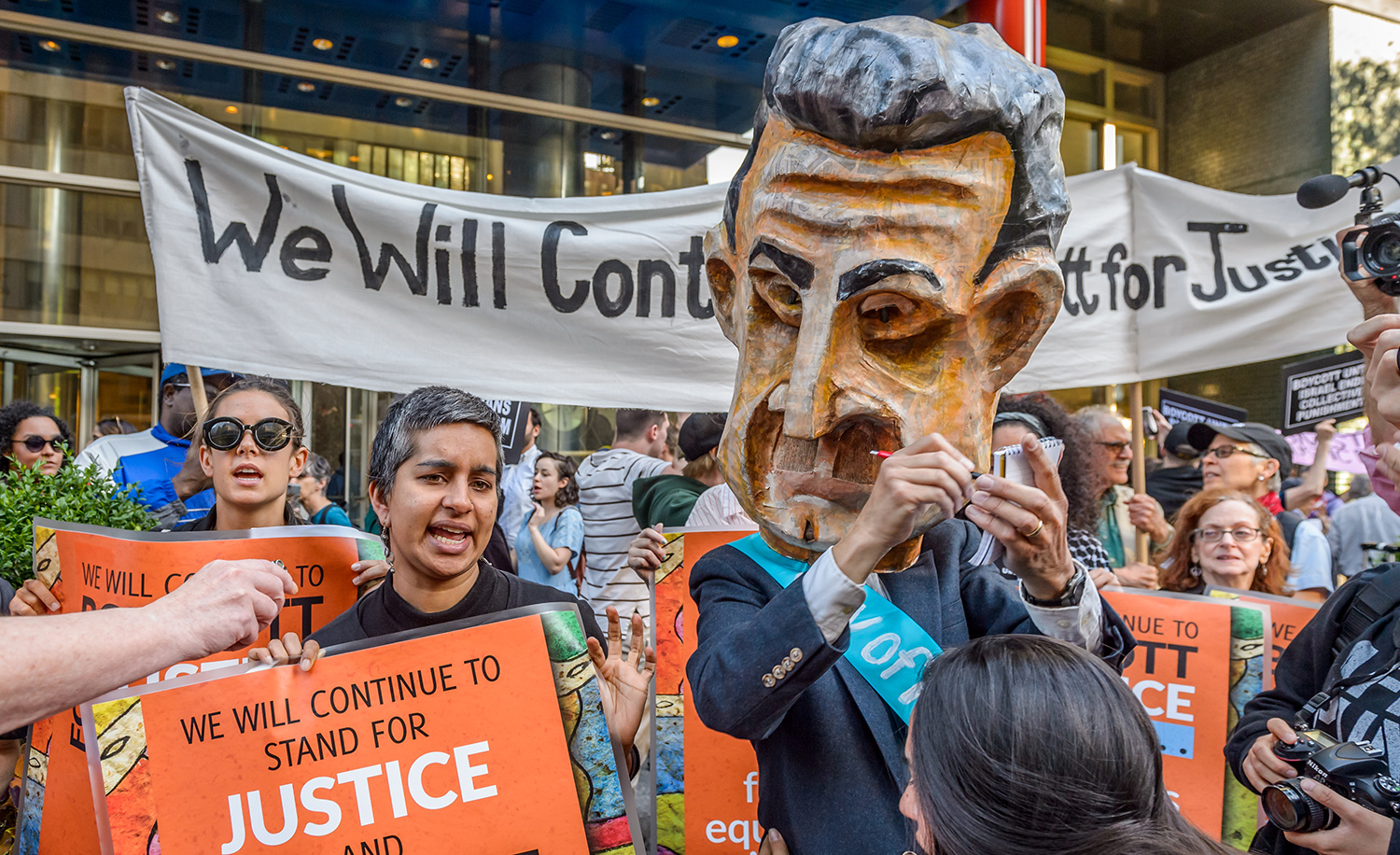 An anti-Israel protest in New York in 2016. Erik McGregor/Pacific Press/LightRocket via Getty Images.

Observation
Ari Hoffman
About the author


Ari Hoffman, a student at Stanford Law School, holds a Ph.D. in English literature from Harvard and writes widely on literature, politics, and culture. His first book, This Year in Jerusalem: The Israel Novel and Why it Matters, is forthcoming from SUNY Press.

It was just another blip in the endless sequence of campus controversies, but for me it was a first. Earlier this month, as the culminating event of Palestine Awareness Week at Stanford University, the Jewish cartoonist Eli Valley was scheduled to give a talk. His work, featuring images depicting in the most obscene way Jews whose politics he despises, and non-Jews like Meghan McCain who support such Jews, had been plastered all over campus.

I didn’t relish spending my last weeks in law school arguing about anti-Semitism and Israel. But I had something to say, so I composed an op-ed for the college newspaper. In it I wrote that Valley’s work was “rude and disgusting, and its ceaseless recourse to Nazi imagery is matched only by its slavish devotion to the age-old tropes of Jewish caricature.” Indeed, so rude and disgusting are Valley’s cartoons that the co-sponsors of his talk, Students for Justice in Palestine (SJP) and Jewish Voice for Peace (JVP), semi-apologized to Stanford’s Jewish community for having disseminated them “out of context.”

My op-ed gained some traction, and the response was ugly: hate on Twitter, Jewish friends who refused to look me in the eye, and similar examples from the barrage of vitriol that regularly greets Jewish writers who proudly identify as Zionists.

In the aftermath, I began to think about the lessons I had learned. What follows, then, is my advice to college students and others who may be wondering how to respond to anti-Semitism, how to write with moral confidence about Israel, how to stand up and step forward at a time of crisis. I hope thereby to play a role, however small, in encouraging them to action, both because the need on campus is acute and because on these issues there is increasingly little distance between the campus and the world outside it.

Look not to institutions; only individual voices matter.

Institutions seek consensus, and must please multiple stakeholders. This is especially true of Jewish institutions, which are being torn apart by internal debates over Israel. Young pro-Israel Jews have long relied on Jewish-affiliated groups on or off campus, but there are limits to that strategy. At moments of true confrontation and controversy, campus Hillel Houses struggle to speak with one voice. Even though not officially under university auspices, they cannot help borrowing the university’s default culture and language, with “listening” and “process” too often replacing clarity and conviction.

This is inadequate to the task, not least because so-called progressive groups on campus enjoy an entire network of allies who are unafraid to depict the Israeli-Palestinian conflict in Manichean terms and can be relied upon to support and amplify the anti-Israel message. Nor are Israel’s relentless opponents under any mandate to represent diverse viewpoints.

The lesson: forget committees, especially steering committees. Write in your own voice.

Fundamentally, your cause is just.

Of course, there will be internal disagreements over specific Israeli policies. But the cause of a Jewish state in the Jews’ ancestral homeland, its search for peace, its need for security, the difficult choices it must make in the face of relentless wars of aggression against it by both hostile states and terrorist organizations: these are realities that you must defend. Anti-Zionism is pernicious and must be fought vigorously. Anti-Semitism is an eternal scourge. To concede these points is to lose the argument before it begins.

There is no escaping the fact that if you write positively about Jews and Israel, you will be subjected to hatred. It will be general, and it will be personal. But just think about those from whom it is coming. Are they persons or groups whose views on Jewishness or Israel you respect? Do they care about your values, or have they outsourced their moral compass to some pre-fabricated ideological orientation? Are they a Twitter bot with a penchant for vulgarity?

Such thoughts can help guide you. Relish the antagonism of those who deserve to be refuted, including Jews, who are frequently the source of the most vitriolic hate. Do not be surprised about this; expect it, and realize that it is why the stakes are so high. If heroes, known or unknown to you, reach out and send strength, you are on the right track. Write for them, and with them.

Some things are complicated, but the most important things usually are not. Don’t let pleas for nuance become an excuse for not doing hard thinking. Often, the most urgent task at any given moment is to say the essential thing clearly.

This is especially true when it comes to first principles. Anti-Semitism and anti-Zionism are rarely subtle; they can’t be otherwise. In response, be bold. Don’t qualify. Don’t hedge. You’ll know your enemy when you see it, and if you see it, you should say so.

Write for your friends, but write especially for your community.

Too often, pro-Israel speakers moderate their voices and modify their arguments in order to persuade a hypothetical swing voter. People are not convinced that way. Neither are they rallied. Write to represent your community: its pain, its outrage, its ideals, its convictions. Pro-Israel students feel besieged and beleaguered in an ocean of hostility. They need representation and strengthening. Writing can provide them with a lifeboat, but only if it is sufficiently sturdy.

There are few voices. Be one of them.

Perhaps my most surprising realization was how few are those willing to speak publicly, under their own name. After my op-ed appeared, some individuals approached me to say they agreed with me but didn’t have the necessary eloquence to speak out. To them I would reply: what matters is not poetics but principles. Others worried aloud that a public stand would present career complications that they felt weren’t worth the risk. To them I would reply: what I’ve learned is that succumbing to the lure of quiescence represents an even greater threat to a meaningful career.

One student told me: “my fear in speaking out for Israel isn’t the possibility I might fail; it’s what my friends will think of me if I succeed.” This cuts to the heart of the issue. On campus, the rewards of credibility and cachet abide with those rising to attack Israel, not those rising to defend it.

To this student I would reply: if we allow Israel to serve us only as a moral abstraction, we will have consigned it to a status that others will deem tragic at best, villainous at worst, and more often the latter than the former. Many people have opinions, but not many make the effort to change the climate of opinion. And therein lies the opportunity: in today’s networked world, venue matters less than ever. Principled writing will find an audience.

On campuses, as attested recently by a shameful dustup at Williams College in Massachusetts, where the student council summarily rejected official recognition of a pro-Israel student group, things are likely only to get worse.  Hostility has been entrenched as ideology, and ideology as unassailable truth. The answer: join the fray. There is no other option.