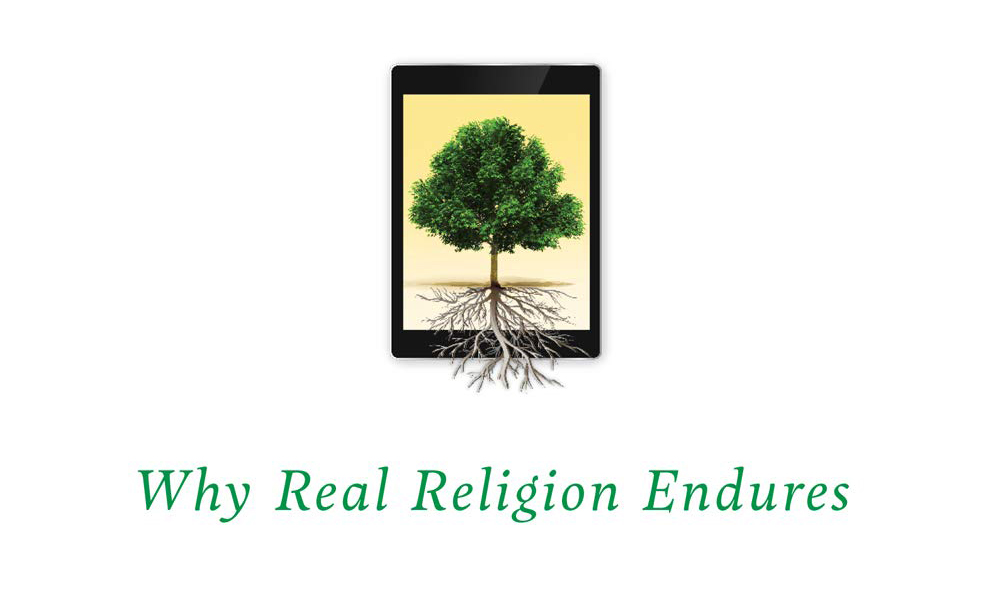 In 1943, C.S. Lewis delivered a series of three lectures, published later that year as the now-classic book The Abolition of Man. With the horrors of world war and totalitarian barbarity as background, Lewis argued persuasively that the rejection of tradition, the replacement of an external moral law with autonomous reason as our source of authority, can deliver us to tyrannies as cruel and unjust as anything in human history.

If Lewis delivered those lectures today, and had a thing for Jewish sociology and game theory, they might resemble Moshe Koppel’s new book Judaism Straight Up: Why Real Religion Matters. (Though I hope that Lewis’s publishers would have come up with a better title.) Koppel isn’t an Oxford don or Christian, but a Jewish professor of computer science and director of a libertarian think tank who lives in Israel. (He’s also a member of the board of the Tikvah Fund, Mosaic‘s sponsoring organization. He had no control over or foresight into this review.) Yet his juxtaposition of cosmopolitan, liberal selfhood, and traditional, religious selfhood joins Lewis’s book as an illuminating, unsettling, and witty critique of the dark side of liberal modernity.

Koppel portrays the ideological positions he discusses as character types, with names and biographical sketches attached. His traditionalist is a Holocaust survivor named Shimen, based on an actual person Koppel knew from his New York upbringing. His cosmopolitan is a Princeton grad named Heidi, portrayed with as much sociological accuracy as Shimen, if less inner richness.

Koppel’s critique of Heidi begins by making the point that progressive types are just as bound by sacred taboos and dogma as traditional types. This is not a new idea, and has been developed in other recent books, for instance Joseph Bottum’s An Anxious Age (2014), Robert George’s Conscience and Its Enemies (2013), and Tara Isabella Burton’s Strange Rites: New Religions for a Godless World (2020).

Koppel develops his particular analysis by drawing on the work of anthropologist Richard Shweder. Schweder (as well as former students of his, such as Jonathan Haidt) observes that our moral intuitions tend to derive from three distinct categories, which Koppel calls fairness, loyalty, and restraint. Koppel explains that Heidi’s moral psychology, like that of most educated, progressive Westerners, is organized primarily around the principle of fairness—a concern for the freedom and rights of others. By contrast, traditionalists like Shimen balance fairness with loyalty, that is, respect for one’s community and its traditions, as well as restraint, which in this context signifies a concern for the natural order.

When it comes to fairness, Heidi is usually supportive of state-based coercion—wealth redistribution, for instance. Qualms about restraint—as is required to observe sexual propriety—strike her, by contrast, as retrograde, while moral sentiments involving loyalty for its own sake to her fellow Jews and fellow Americans seem to her tribalistic and even pernicious.

This outsize focus on fairness generates problems. Giving ever more power to the state, Heidi must appeal to the supposed impartiality of experts, itself a leap of faith. She neglects the loyalty commitments that permit a society to defend itself when necessary. Her disregard of restraint mechanisms can cause social damage that most harms the weakest members of society.

Like Lewis, though, Koppel argues that the real test of a moral society is multi-generational. A way of life can’t be fully understood within the horizon of a single generation but must be looked at in the context of the offspring it strengthens or haunts. And the biggest problem with Heidi’s moral system is Heidi’s daughter, Amber.

Amber is now a student at Oberlin, majoring in colonial and environmental studies. She rarely acknowledges her Jewish roots other than to occasionally begin remarks hostile to Judaism or to Israel with the words, “As a Jew . . . ”

Amber doesn’t share with Heidi the memory of a real community, of a large and committed family, and of grandparents who could speak of genuine persecution. Amber needs something to give her life direction, and the standard tribal membership that was enjoyed by her grandparents, and that served her mother as a silent anchor, isn’t going to work for her.

To replace the moral structures abandoned by Heidi, Amber has turned to social justice. Heidi’s commitment to fairness becomes for Amber a crusade to punish some groups for their perceived privilege while exalting others as sacred totems of systemic victimhood. Amber would harness state power and mob will to silence transgressors—for instance, those who adhere to biological notions of sex. The product of Heidi’s liberal cosmopolitanism, Amber has devised a moral regime so rigid and militant that it makes Shimen’s Orthodoxy look like a Unitarian potluck.

Is Shimen’s Orthodoxy a serious alternative? Jewish law—halakhah—with its reliance on ancient texts and the views of rabbis, will seem to most a bizarre model to propose for the conduct of a modern society. After all, for most of the last 2,000 years halakhah hasn’t even had a formal mechanism for enforcement.

That, Koppel argues, is the point. The communities that produced Shimen were able to function without centralized enforcement, guided primarily by the moral intuitions of their members, with (usually ex-post-facto) appeals to rabbinic authority when needed. As a bottom-up system of communal self-governance, enforced through social pressure rather than state mechanisms, they were surprisingly functional and resilient.

At least, they were for Shimen, who “spoke” his Jewishness as an organic and instinctive “first language,” as Koppel puts it. But his community was destroyed in the Holocaust. However enviable his community may have been, it no longer exists. Koppel sees most forms of Orthodoxy today as necessarily artificial attempts to learn Shimen’s traditionalism as a “second language,” lacking the intuitive dynamism and fluency of the original. Where might we find a moral community, then, one not necessarily identical to Shimen’s in its particulars, but with the same ability, under sufficient conditions of political and material security, to stay rooted in its own traditions and thrive over time?

To answer this question, Koppel in the last part of his book expands the cast of characters. He introduces us to Heidi’s cousins, one Modern Orthodox and the other “yeshivish,” as well as their three Israeli counterparts, one secular, one national-religious, and one ḥaredi. But he does not see any of these ideological types as holding the key.

Instead, after critiquing these different camps, Koppel once again turns to the next generation. Unlike both Amber and her Orthodox cousins in the United States, the younger Israeli generation is taking part in a messy, exciting conversation that suggests the possible emergence of a happily decentralized Jewish moral society, loosened from statist planning and able to evolve on its own terms. Koppel’s vision of a Jewish future in Israel is simultaneously messianic and modest in its libertarian way:

The redemption of the Jewish people will not be bestowed by the state; rather, if we will it, it will be the result of slow development from the bottom up, as healthy Jewish instincts under conditions of freedom are gradually made manifest in the public sphere. If the state and all the determined do-gooders just leave us alone, one day, when we are least expecting it, we might just look around and think to ourselves: you know what, here we are, free Jews living in a Jewish country, building it and sustaining it, studying the Torah and more or less living by its commandments, raising proud and non-neurotic Jewish kids. Free at last.

One hopes Shimen would approve.

Koppel seems to me spot on in his explication of the flaws in Heidi’s moral culture. Indeed, here in Portland, Oregon, where I live, we seem to be living in a permanent Amber alert. If anything, events in the United States in the short time since Koppel’s book appeared show disturbingly the capacity of supposedly liberal institutions to become oppressive and punish dissent.

His making Shimen into the avatar of traditional moral culture begs some questions, however, and mainly because, unlike Heidi and company, Shimen is a singular (and singularly admirable) individual. Elie Wiesel wrote about him admiringly in the post-Holocaust chronicle One Generation After. I do not think that Koppel stacks the deck in this way against Heidi—his composite portrait is, if anything, more appealing than many of the real-life Heidis I know—but rather that Shimen trails so much particular history in his wake that he distracts at points from the book’s concern with sociological paradigms and moral psychology.

Packing so much heady discussion into fewer than 200 pages, Koppel is careful to set aside certain topics. He acknowledges in the introduction several of his book’s limitations that can, and surely will, be addressed by others.

Most obviously, he admits that “Shimen is a man in a society in which men dominate the public sphere; if I had chosen, for example, to compare Heidi with Shimen’s wife, rather than with Shimen, this would be a very different book. . . . it would bring into sharp relief certain aspects of Shimen’s world that, for better or worse, are less attractive to most contemporary readers than the ones I emphasize here.”

Indeed, the role of women in traditional societies is, to return to Shweder’s categories, the fairness issue par excellence for any who seek to balance cosmopolitanism and traditional commitments. Still, the best case for keeping the claims of modern feminism in healthy balance with loyalty and restraint claims is probably Amber who would abolish the very categories of women and men, as even many feminists are belatedly coming to realize.

Even if Koppel’s picture of traditional Jewish life is overly sunny, though, his sociology of halakhah makes a suggestive case for the practicability of radically non-statist forms of political organization. The model of informal innovation on a local scale has much to recommend it, certainly in an America in which disaggregation into smaller and more sustainable moral communities may now be a best-case scenario. Shimen may be more relevant today than even Koppel intended.