Which is Better: to Be Righteous, or to Be Quick to Sin and Quick to Repent?

The story of Joseph sets up two archetypes: the righteous dreamer (Joseph) and the flawed but penitent sinner (his brother Judah). Both have a place in the tradition, but one is preferred. 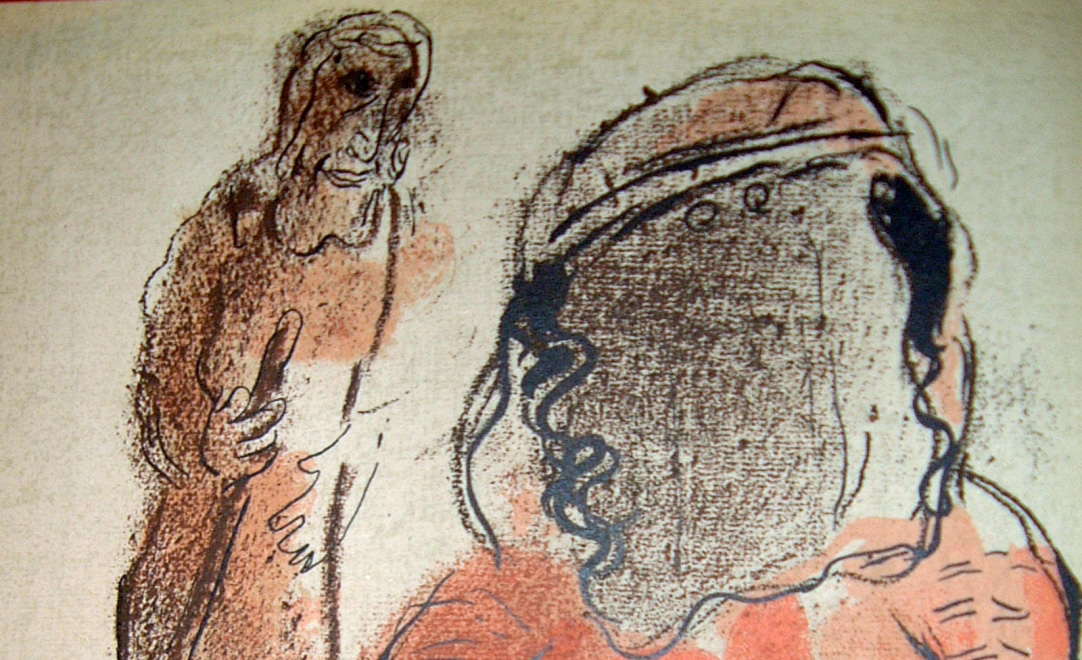 In the final chapters of Genesis, where this week’s reading of Vayeshev (37:1-40:23) plays a pivotal part, the stories of the patriarchs reach a dramatic crescendo with the extended Joseph narrative.

Very briefly: Joseph’s preening dreams of superiority, and the fact that his father clearly favors him over his ten older brothers, have made him the object of their burning jealousy and resentment. They get their revenge by selling him into slavery. Purchased by an Egyptian nobleman, Joseph undergoes a series of exploits and mishaps that culminate in his being appointed Pharaoh’s vizier and grain-czar. When his brothers, suffering a regional famine, come to Egypt to buy food, they encounter but do not recognize him in his majesty. Concealing his identity and subjecting them to elaborate hazing, he finally reveals himself, and they reconcile happily.

Throughout his life, Joseph the dreamer understands the bigger picture in a way that others around him cannot. It is this enchanted status that first stirs his brothers’ animosity. In the rabbinic tradition, he is known as “Joseph the Righteous”—emphasizing the way in which he stays true to his convictions and withstands temptation even in the depths of Egyptian imprisonment. In the biblical text itself, however, it is not so much piety as serendipity that appears to shape his life. Things keep working out for him, even after he is enslaved and then imprisoned. But it is not just a matter of luck, either: his dramatic progression—from favored son, to lowly servant, to Egyptian grandee—suggests something remarkable about his personality.

A sharper understanding of Joseph can come from an often overlooked and seemingly out-of-place episode dropped into the middle of this saga. Constituting chapter 38 of Genesis, it concerns his less saintly older brother Judah. In the immediately previous chapter, Judah has joined the other brothers in their plot to kill Joseph; but then he has second thoughts about fratricide and convinces them to sell him into slavery instead. Judah thus comes off as somewhat better than the rest. Much later on, in the denouement before Joseph’s throne in chapter 44, Judah’s leadership will be far less ambiguous: in dealing with the still-concealed Joseph who has threatened to imprison Benjamin, the youngest of Jacob’s sons, Judah speaks up for the family and puts his own life on the line.

There is no doubt that Joseph is the hero of these narratives: the focus of most of the text’s attention, possessor of a seemingly divine gift of foresight, and archetypal outsider who makes it big. But while Joseph lives most of his life apart from his brothers, Judah—although a secondary character and one who makes bad choices as well as good ones—is their undisputed leader, the brother who takes decisive actions on their behalf.

With that in mind, let’s turn to the morally complicated portrait in Genesis 38. In contrast with Joseph, who stubbornly withstands the advances of his master Potiphar’s wife, Judah succumbs to sexual temptation. Two of his three sons die childless—perhaps as punishment for Judah’s role in taking Joseph away from their father. Judah then constrains, perhaps indefinitely, the third son from marrying Tamar, the elder son’s widow, as contemporary custom requires.

Tamar, now husbandless, childless, and frustrated by Judah’s denial of her right to levirate marriage, takes matters into her own hands. In order to perpetuate the family line, she disguises herself and without great difficulty seduces her father-in-law by allowing him to mistake her for a prostitute. When it becomes apparent that Tamar is pregnant, Judah demands that she be killed for her licentiousness. She then hastily reveals to him that he himself is the father of her unborn twins. What follows is a kind of redemption, as Judah takes responsibility for his actions and declares that Tamar “is more righteous than I.” But the two, we also learn, will never be intimate again.

The insertion of this story of Judah and Tamar in the midst of the larger Joseph narrative creates a kind of dizzying split-frame effect, toggling from one character and location to another. When we were initially introduced to Joseph as a favorite son, we might have assumed he was in line to be a fourth patriarch, the one who, like his father Jacob and grandfather Isaac before him, will inherit the covenantal mantle to the exclusion of his elder siblings. But the sudden focus on Judah disturbs that notion, introducing a different set of unspoken tensions.

Unlike Joseph the Righteous, Judah emerges from the Joseph story defined by his mistakes; his most admirable trait is his willingness to admit his guilt, accept his obligations, and mend his ways. There is a stark contrast between this satisfactory but imperfect ending and the happy conclusion of the Joseph story, in which the glorious hero reconciles with his brothers—whom he has magnanimously forgiven—and abundantly provides for his family in their time of need.

And yet, when it comes to Judah’s behavior throughout Genesis, there are subtle hints that he might play a larger role in the development of the Jewish nation than we might have otherwise imagined.

Indeed, in the grand sweep of the Bible, it will be not Joseph’s but Judah’s tribe that ultimately produces the great kings of the Jewish people: David, Solomon, and their progeny who rule the Southern Kingdom until the Babylonian exile. None other than King David himself shares qualities with Judah. He, too, is a leader who sins grievously, most notoriously in his affair with the married Bathsheba and in arranging to have her husband Uriah killed. But like his forebear Judah, David ultimately recognizes his wrongdoing and repents before God.

And now contrast this story with that of Saul, David’s predecessor as the very first Israelite king. A descendant of Benjamin, who is closely linked to Joseph as the only other son of Jacob’s beloved wife Rachel, Saul, like Joseph, never displays sexual indiscretion as exhibited by Judah and David. But he does commit his own sins—and, unlike either David or Judah, he never accepts responsibility for them in a straightforward manner. Rather, he is drawn into a downward spiral of sin that leads to madness, loss of divine imprimatur, and an ignominious death.

The discrepant Joseph and Judah paradigms play out in other ways as well. In the Bible, after the united monarchy splits, the Northern Kingdom remains associated with Joseph, as its capital is located in the tribal territory of his son Ephraim whose name is sometimes used as shorthand for the ten northern tribes. Extrapolating from the dual leadership roles of these two characters and tribes, some rabbinic texts conceive of two future messiahs: the “Messiah Son of Joseph,” whose task will be to defeat worldly enemies and possibly rebuild the Temple before (in most versions) being killed in battle, and the better-known “Messiah Son of David,” who will inherit the Davidic throne and usher in the end of days.

In another trope, Joseph, like Esther and Daniel in their respective books, is often invoked as the model of a Diaspora leader, one whose protective powers are great if also ultimately dependent, being derivative of those of a non-Jewish sovereign. Judah represents the no less fraught but decidedly more fulfilled position of being in control of one’s own homeland.

Which, then, is the superior paradigm, Joseph the Righteous or Judah the flawed-but-penitent hero? Ultimately they coexist—both archetypes find their place in the tradition—but a preference is discernible. Joseph is an outwardly excellent figure whose traumas remain repressed and unresolved. This inner discord might explain why he toys with his brothers after their initial encounter in Egypt—concealing his identity, threatening them, and acting by turns hostile and generous. Judah, though sinking to lower personal depths than Joseph, accepts accountability for his wrongdoing openly and directly. Quick to sin and quick to repent, he seems a more durable role model than the fragile Joseph. Their father Jacob, on his deathbed, showers Joseph with blessings; but he declares unequivocally that “the scepter will not depart from Judah.” Joseph is special, but it’s Judah who will be king.

Additional insight may be gleaned from the characters’ names themselves. Joseph, as explained by his mother Rachel, means “May [God] add on,” a name that reflects her own struggles with infertility and longing for additional sons. Joseph is lofty and distant, aloof from his brothers even as he is instrumental in their salvation; a dreamer, and an interpreter of dreams, he looks to the future.

The name Judah derives from hoda’ah, or “gratitude,” an expression of thanksgiving that is possible only for someone rooted in and mindful of the present. The very word Jew (y’hudi) comes from Judah, defining the Jews as a people who labor within and give thanks for the here and now, with all of its complexities and imperfections.

Which is Better: to Be Righteous, or to Be Quick to Sin and Quick to Repent?