The products of the Yiddish greeting-card industry are a reminder of how wonderfully varied was the world of Yiddish-speaking Jewry. 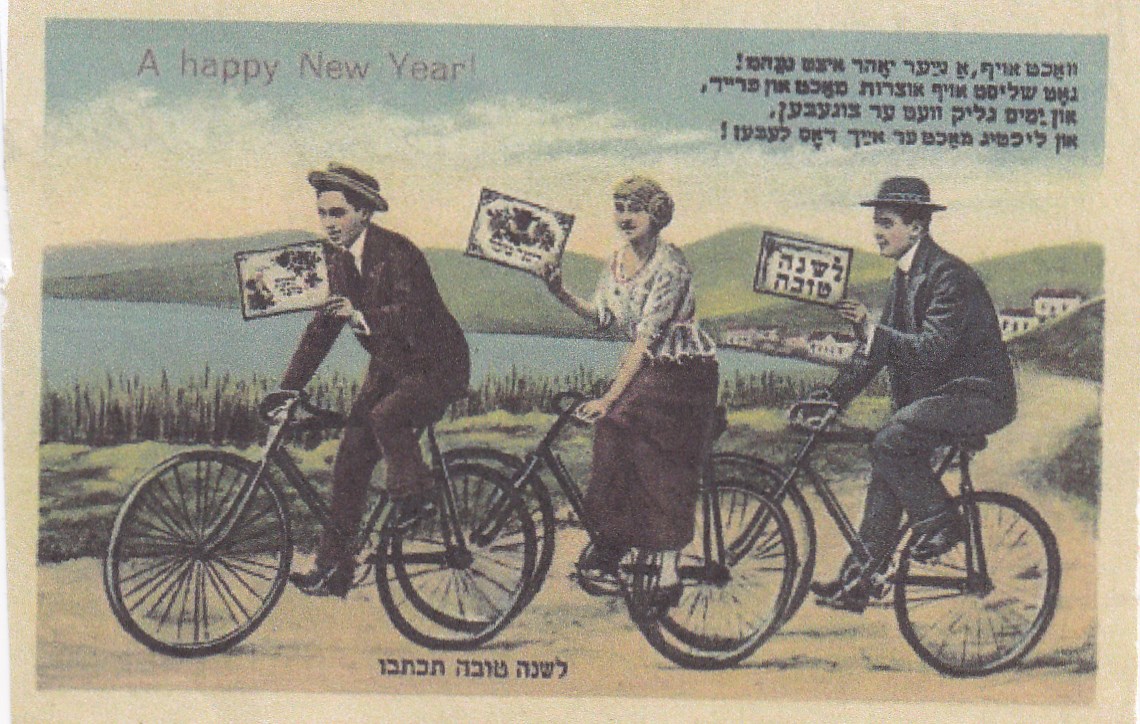 We no longer send many Rosh Hashanah greeting cards to each other. Once, in the days leading up to the holiday, the mailboxes were clogged with them. Now, if we send them at all—and why bother, when we’re in constant email, WhatsApp, or Twitter contact with those who might receive them?—they often go electronically.

And yet there was a time when such cards were as much a part of the weeks before Rosh Hashanah as the shortening of the days and the first hints of autumn. While many are old enough to remember them well, few have memories that extend back to their real heyday. That was in the first half of the last century, when an entire industry of such greeting cards existed in America and Europe, much of it in Yiddish. These old Yiddish greetings, a large number of which can be viewed at various online sites, are fascinating to look at, not only because they are generally more imaginative and creative (not to say more sentimental) than their blander counterparts today, but because they remind us of how varied and multifaceted was the world of Yiddish-speaking Jewry in the decades before World War II.

Some of these cards are of a general nature. In one of obvious American provenance, because the caption “A happy New Year” appears at its top beside L’shanah tovah tikatevu, “May you be inscribed for a good year,” a winged, female angel bends over a book, quill in hand, while pausing to look up from it dreamily. At her feet, a rhymed Yiddish stanza says:

(“Inscribe us, dear angel, in the book of happiness and life, and may a good, forgiving God give His consent.”)

In a just as obviously East European card, l’shanah tovah tikatevu appears by itself above a carefully posed photograph of a family at a holiday table. The hosts are a middle-class-looking husband and wife, possibly but not necessarily observant, with their daughter and son; their guests are a younger, definitely religious couple, a man with a black beard and hat and a woman who seems to be the hostess’s sister.  All except the boy, who is not old enough to drink, raise glasses in a toast. We read:

(“With one’s family at the table, one drinks in the new year with double zest. Each lifts high his glass of wine—may our luck bring us happiness!”) 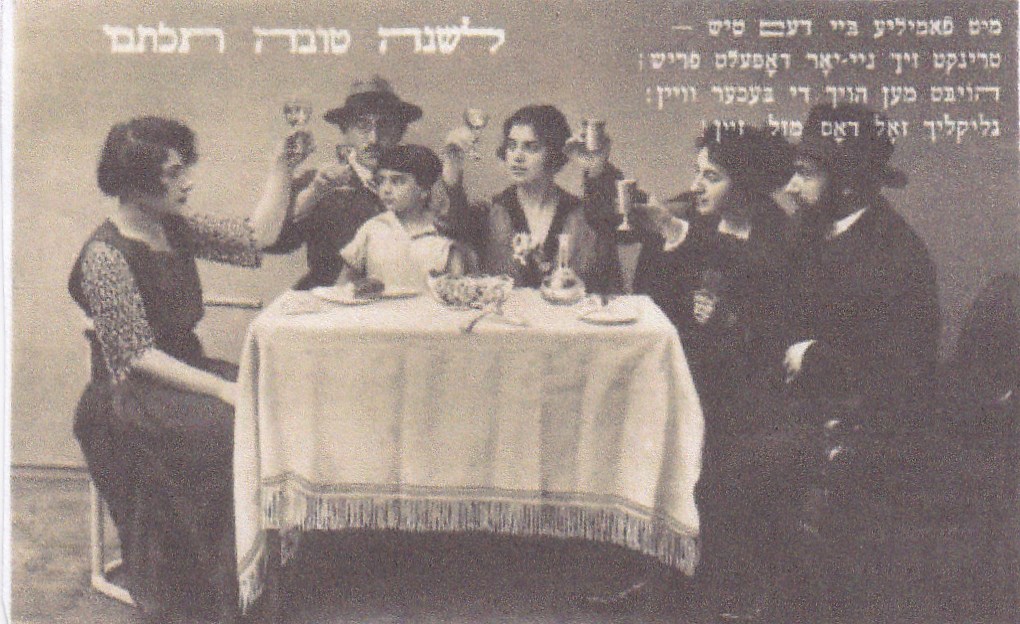 Many Yiddish Rosh Hashanah cards were addressed to children. In one, an angel stands by a telescope pointed at a starry sky while youngsters line up in a row in front of her, each awaiting his or her turn for a look. The accompanying text says:

(“Children! You see the star of a new year. Like them, may your good fortune also shine bright and clear!”)

Lovers were also a favorite theme. One card shows a nattily dressed young man, a boater on his head and a neatly folded white handkerchief in his jacket pocket, mailing a letter. He thinks:

(“I’m posting a note to you, dearest to me of all. For you, a heartfelt greeting—a l’shanah tovah for my bride.”)

Another Rosh Hashanah card depicts still another angel watching a balance scale, one pan filled with gold coins and the other with a bright red heart. The heart outweighs the gold and the card’s recipient is warned:

(“The angel is weighing a heart and money. Don’t be fooled: money is the worst filth—a tender heart remains so.”)

But not all Yiddish shanah tovah cards disdained wealth. One that doesn’t again shows a family seated around a table, this time staring in amazement at the front door. A messenger is standing there with a telegram informing it that it holds a winning lottery ticket:

(“Out of nowhere the door opens and a Jew shouts: ‘You’ve won! You’ve won! God has given you luck, joy, it’s a great thing!’ Everyone—father, mother, son, and daughter-in-law—is so joyous that every eye gleams.”)  May this or its like, the card’s message is, be your happy lot in the year to come.

Some Rosh Hashanah cards signal the faction in the Jewish world to which their sender belonged. One, for example, shows three Jewish smiths with workingmen’s caps laboring at a forge. A younger one places some sheet metal with the words l’shanah tovah on an anvil for an older one to hammer out. The Yiddish caption reads:

(“We forge the new year and are now forging good luck, life, and health for all Jews.”)

Whether this was a Bundist or Communist greeting card is hard to say, but its proletarian and anti-religious airs (it is the working class, not God, that will determine Jewish fate!) are clear. By contrast, no less clearly religiously Orthodox is a card in which a father and grandfather, both wearing ḥasidic shtreimels (fur hats), bless a small boy and girl against a background of shelves filled with sacred books:

(“May the new year give you the strength to serve our Creator truly and illuminate your minds with the light of His Torah!”)

Zionist Rosh Hashanah cards abounded, too. In one, a toy train is pulled through green fields by a rosy-cheeked girl holding a sign that says Nokh Erets-Yisroel, “To the Land of Israel.” Its open boxcars carry freight labeled “Strength,” “Energy,” “Action,” etc., and the smoke from its engine trails off in white strips of paper that have “Certificate” (a visa for Palestine issued by the British Mandate government) written on them. Below the illustration are the words:

(“A train is running to the Land of Israel, full of hope and faith. It’s bringing us true victory this very year!”)

For the many young Jews who were neither Communist, Bundist, religiously Orthodox, nor Zionist, but simply wanted to get ahead in life and enjoy it, there was also no lack of new-year cards. Many of these were illustrated with such symbols of modernity as automobiles, airplanes, bicycles, and even hot-air balloons. In one, seven brightly dressed young passengers on an outing gaily wave shanah tovah placards from a model-T sports car and proclaim:

And a young couple jointly gripping the steering wheel of what looks like a Wright Brothers flying machine declare:

(“We’re bringing you the tidings: A new age is on its way with light and shine, with happiness and joy. The world is being reborn!”)

So what would a Yiddish Rosh Hashanah card from a language columnist look like? I suppose it would picture him perched on a stack of dictionaries reaching as high as the ceiling while he declaims:

(“May you have a good new year without complaints or quarrels. So wishes for you a friend, your Philologos.”)