It’s not that they were exceptionally sophisticated or tolerant, as one popular recent article would have it—it’s that they lived surrounded by people who raised pigs. 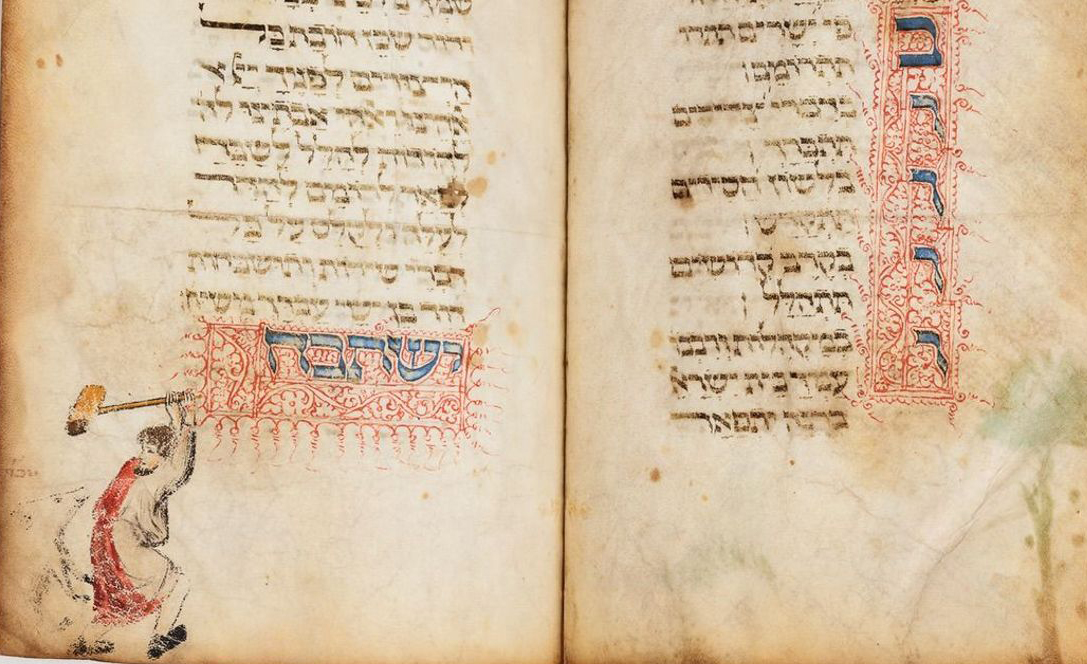 From the Lombard Haggadah. Les Enluminares.


Marc Michael Epstein is professor of religion and visual culture and director of Jewish studies at Vassar College. He is the author of, among other books, The Medieval Haggadah: Art, Narrative, and Religious Imagination (2011) and Skies of Parchment, Seas of Ink: Jewish Illuminated Manuscripts (2015).

In some American Jewish households, the custom of placing an orange on the traditional seder plate to signify the inclusion of gay and lesbian Jews in the community—an innovation out of whole cloth originally dreamed up, in her own account, by Susannah Heschel—has become a conventional element of Passover observance. But now Adam Cohen, a professor of art history at the University of Toronto, claims to have unearthed another, much earlier, and even more startling Passover-related novelty. He has shared his detective work, as he calls it, with the readers of the Forward in an article bearing a title evocative of Sir Arthur Conan-Doyle: “The Curious Incident of the Pig in the Haggadah.”

The eponymous pig is an image of a man slaughtering a pig that graces the Lombard Haggadah, an illustrated Hebrew manuscript produced around 1390 in northern Italy (and about which I have written previously in Mosaic). Admittedly somewhat strange, the image assumes its place in that beautiful work as one in a pictorial series on the theme of the Labors of the Month: a normal feature of medieval and early Renaissance illustrated manuscripts. In this Haggadah, made for a Jewish patron by Christian artists, just as in the manuscripts made for Christian patrons, it serves as the emblem of the month of December.

Cohen, however, connects the Labors as they appear in the Lombard Haggadah with Psalm 136, itself a constituent part of the standard Haggadah text. This psalm, he says, centers on the variety and wonders of creation and the natural world. As for the shocking inclusion of the image of a pig in a Haggadah, Cohen ultimately attributes it to the sophisticated, urbane, and tolerant tastes of the work’s wealthy Jewish patrons.

First, Cohen overstates the alleged connection between the theme of the Labors of the Month and the text of Psalm 136. The Labors of the Months focus not on the wonders of God’s creation conceived abstractly or writ large but on the diverse human activities conducted over the course of the seasons.

True, Psalm 136 does begin, after three introductory verses praising the Almighty, with six verses celebrating creation. These, however, describe the created world not in the context of human labor but from a “God’s-eye” perspective. Then the psalm moves swiftly to fifteen verses on, specifically, God’s intervention in the Exodus, the psalmist’s main focus and indubitably the reason the work was chosen by the ancient rabbis for inclusion in the traditional Haggadah.

Nor, contrary to Cohen, does the Lombard Haggadah itself primarily associate the Labors of the Months with Psalm 136. The illustrated pages bearing that biblical text relate only to the first four months of the year (January-April). The illustrations for the remaining eight months (May-December, by far the majority) are accompanied by a different text entirely, and one that makes a much more suitable accompaniment to depictions of the wonders and variety of God’s creation. This is Nishmat kol ḥai, “The Breath of All that Lives,” a prayer that, in celebrating the divine “breath” running through all creation, only secondarily mentions the Exodus from Egypt.

To have marked this latter fact might actually have bolstered Cohen’s pairing of the Labors with texts on the glories of creation, but he seems to have overlooked it. Parenthetically, an even better match would have been Psalm 105—recited on the New Month, and thus associated with the calendar—which dwells on the relationship among the created world, the seasons, and human labor. But that psalm, lacking any connection to or mention of the Exodus, does not appear in the Haggadah.

In sum, Cohen’s conjectured linking of a particular text (Psalm 136) to a particular series of images (the Labors of the Months) falls flat. Of course, a historian might still legitimately wonder whether the patrons of this elegant book may have indeed perceived some such linkage, even if we can’t discern what it was. We should never forget our distance from the world of the patrons, or the difference that makes.

But that brings me to my second point, which involves the actual practice of medieval Jewish patrons commissioning art from non-Jewish artisans. What sorts of relationships developed through these interactions between Jews and non-Jews, and, as a result, between so-called “Jewish” and “non-Jewish” art? Is it not perfectly plausible, after all, that affluent, late-14th-century Italian Jews would have been unfazed by the image of a pig not because they were exceptionally urbane and sophisticated but because, in their time and place, that was precisely how one thought of the month of December?

For them, in other words, December was not the month in which “we” (the Jews) slaughtered pigs—that went without saying—but the month in which the majority custom was to slaughter pigs. That activity, rather like the hanging of Christmas lights today, or the ubiquitous image of Santa Claus, was the universal signal that the month of December had arrived.

Thus, there is no mystery, no cause for astonishment, and no “curious incident” begging to be solved. In the eyes of the patrons of this manuscript, pig-slaughtering wasn’t a quintessentially “non-Jewish” emblem being deployed by Jews out of a desire to be with-it. It was more like the late 14th century’s version of the “Christmas tree”: an image that a few ultra-observant Jews might have regarded as inappropriate in a Jewish text but that many others would have regarded simply as secular and utterly conventional.

Indeed, a similar principle could be seen at work much earlier in the art made for Hellenized Jews in the land of Israel in late antiquity. The mosaic floors of synagogues in the Byzantine period often depicted the emblematic images of the zodiac and personifications of the Labors of the Four Seasons, with the sun in the center of it all. The latter was regularly embodied, moreover, in the form of the sun god Helios in his chariot.

Helios in a synagogue? Surely as jarring as a pig in a Haggadah—or is it? Ask any 21st-century individual to draw a picture of the sun, and the result will likely be a circle with rays projecting from it and perhaps a smiling face. This is not how that fiery ball of gas actually looks, but it is our convention, our shorthand, for depicting it.

Nobody worshipped the image of Helios in Byzantine synagogues. As the historian and archaeologist Lee Levine has pointed out, he appears on the floor, and everyone treads on his image—an act hardly compatible with worship. Helios was the image that represented, articulated, and was “read” as the sun in the Hellenized land of Israel, just as, a millennium later, the image of pig-slaughtering, which began as a convention in art supported by Christian patrons, became a general convention: an epitome of “December” among both Christians and Jews in certain parts of Europe. The very fact of its employment in this manuscript testifies to its general acceptance and ubiquity.

My final point: to me, what truly makes this image in the Lombard Haggadah of special interest is the way in which—like Christmas trees in the living rooms of many assimilated Jews today—it marks with specificity the line of demarcation that such Jews toe, now as then. Just as a Christmas tree is not a crèche or an altar, a depiction of a pig slaughter is not an Annunciation or a Crucifixion. Just as contemporary Jewish owners of Christmas trees are not, by and large, worshippers of Jesus, medieval Italian Jews were most likely neither slaughtering nor eating pigs.

Nor, one might add, were their northern European coreligionists busily hunting decidedly non-kosher hares, often with the aid of a pack of hounds: a marker, in that region, not of December but of springtime, and depicted in just that way in illustrated manuscripts of the Haggadah commissioned by wealthy northern European Jews in celebration of the springtime deliverance of their ancestors from Egypt.

Sharing deeply embedded cultural signifiers like these—symbolic rather than descriptive, and voided of the power of religious permission or prohibition—enabled Jews to become, if not equal citizens, at least participants in a common culture, even in so early an age as the late 14th century.