The Peril and Promise of Administrative Law for Religious Freedom

The growing administrative state can pose grave problems for religious liberty. Can it also provide solutions? 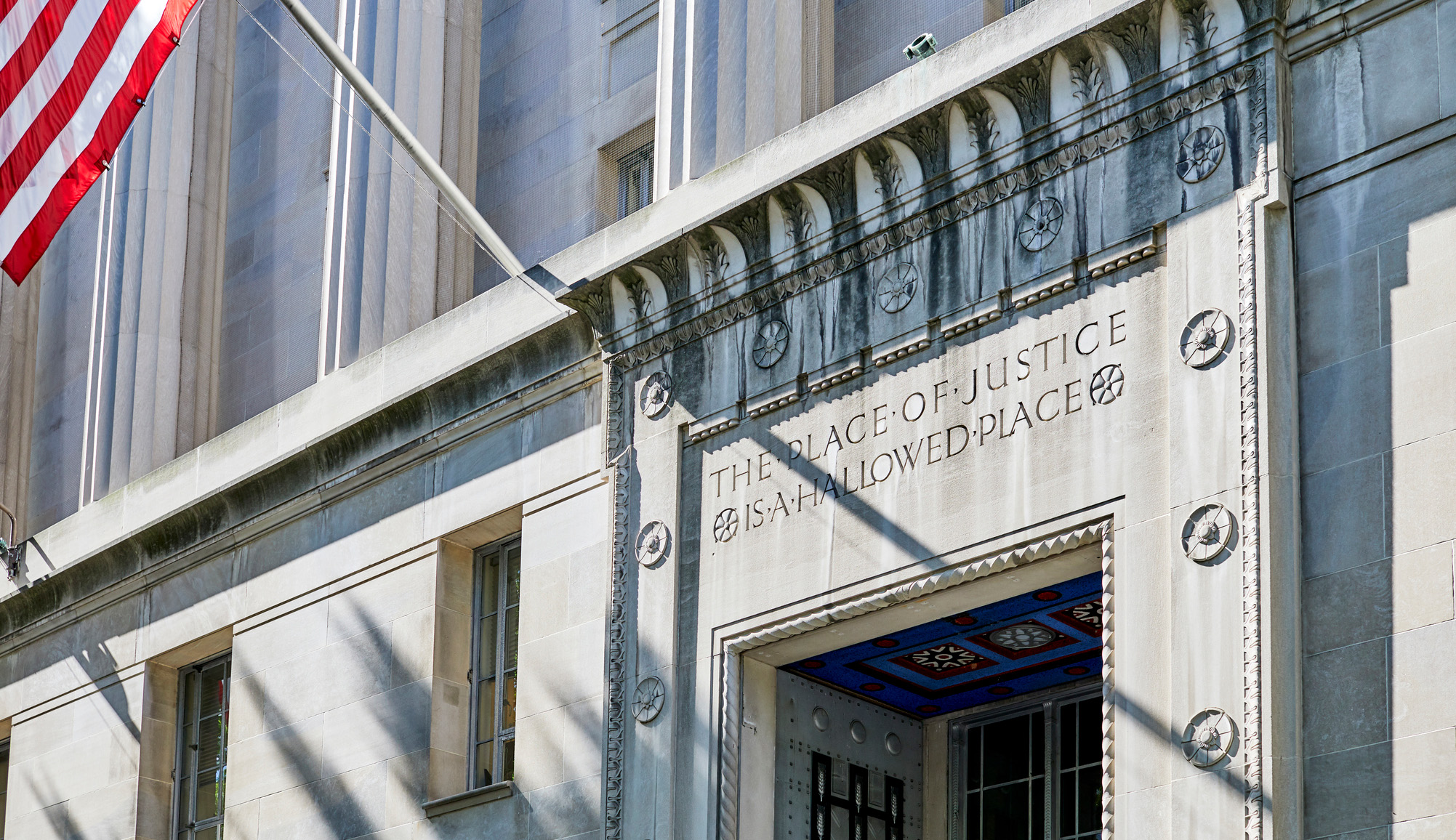 The entrance to the Robert F. Kennedy Department of Justice building in Washington, D.C. wingedwolf/iStock.

Response
Mark Rienzi
About the author


Mark Rienzi is the president and CEO of the Becket Fund for Religious Liberty and a professor of law at the Catholic University of America. The views presented are his own.

In “The Overseers of American Religion,” Adam White ably examines how, as policymaking has shifted away from elected legislators and toward less accountable regulators, the administrative state has emerged as a serious threat to religious liberty. Government agencies can sometimes be indifferent or even antagonistic toward religious concerns. As White explains, these agencies often operate within narrow areas of expertise and with a technocratic focus on quantifiable metrics—tools poorly suited to thinking about the values of religious pluralism, which, in his words, “cannot easily be incorporated into a spreadsheet’s sums.”

But there are perils too. First, in the face of hot-button religious-liberty conflicts, judges might be tempted to use administrative law—the branch of American law that relates to the workings of federal agencies and the regulations they produce—as a way to avoid the thorniest questions. That might spare the court from a tough decision (at least until Congress speaks more clearly) but it also allows the underlying conflicts to fester. Failing to resolve these disputes directly can embroil religious parties in years of unnecessary litigation, and can keep the country—and the courts—from moving forward. To be sure, White does not suggest abandoning religious liberty law and only using administrative solutions. But courts must be careful not to fall into the trap of using administrative solutions to dodge hard religious-liberty questions that our pluralistic society needs answered.

Let me begin by emphasizing how right White is about his basic premise: administrative law—done right—can be used to bolster religious liberty. The long-running controversy over the Obamacare contraceptive mandate illustrates two distinct ways in which this is true: in the courts and in the agencies.

First, courts can sometimes help eliminate some religious-liberty conflicts by reining in the administrative state. As White notes, the contraceptive mandate appears nowhere in the Affordable Care Act. Nonetheless, President Obama’s Department of Health and Human Services (HHS) promulgated regulations requiring employers to provide contraceptives to their employees by deeming them required “preventive services.” Some religious employers could not in good conscience comply with this mandate and sued, seeking religious exemptions. The ensuing conflict has roiled the courts with over a decade of litigation. More than a hundred cases were filed across the country; the conflicts repeatedly went to the Supreme Court, and some continue to this day. In some ways, the contraceptive-mandate fight is the religious-liberty conflict that never ends.

Yet as White points out, the “major-questions doctrine”—designed to stop agencies from deciding questions of deep political or economic significance without a clear Congressional directive—could show that the agency lacked authority to issue the mandate in the first place. At the end of last term, the Supreme Court decision in West Virginia v. EPA used the major-questions doctrine to prevent the usurpation of legislative power by agencies. In a concurring opinion, Justice Gorsuch explained how this doctrine protects both our system of government and individual rights by ensuring that authority is only wielded by politically accountable legislators or their clear designees.

It is easy to see how this doctrine could be applied to the contraceptive mandate. Indeed, the Court has already made all the requisite findings to strike down the mandate completely under the major-questions doctrine. In Hobby Lobby, the Court recognized that the mandate would affect millions, and that it implicated “difficult and important” religious questions. The dissent agreed the mandate involved “critically important” services. And the Court later found in Little Sisters of the Poor—a hallmark case involving a group of nuns seeking an exemption to the mandate—that “no language in the statute itself even hints that Congress intended that contraception should or must be covered.”

Under the major-questions doctrine, that combination of circumstances—a question of deep political significance that Congress did not address directly—forecloses agency action. Thus, as White suggests, administrative law’s major-questions doctrine could well be a key source of support for religious liberty, because it could eliminate altogether the contraceptive mandate that has caused so much conflict in the courts for so long. That resolution might be only temporary—it would expire if Congress spoke more clearly—but it would be helpful.

The version of the Little Sisters case that the Supreme Court decided in 2020 also confirms a second of White’s observations: that administrative agencies themselves might be trained to consider important values like religious freedom in their rulemaking. By 2020, the federal agencies under President Trump had attempted to provide a religious exemption, for which they and the Little Sisters faced lawsuits from more than a dozen state governments. When the state governments claimed that the agencies should not have considered religious liberty, the Supreme Court disagreed, explaining that “it was appropriate for the departments to consider” religious exemptions, because the 1993 Religious Freedom Restoration Act (RFRA) “applies to all federal law” including the “implementation” of federal law. Indeed, the Court said that if the agencies had not considered religion, “they would certainly have been susceptible to claims that the rules were arbitrary and capricious for failing to consider an important aspect of the problem.”

The long-running contraceptive-mandate fight, then, shows that administrative law—if well applied by the courts and agencies—holds the promise of resolving some religious liberty disputes both by restraining bad behavior on the part of the agencies, and promoting good behavior.

First, there is a danger that courts might be tempted to use administrative law as a way to avoid addressing religious-liberty questions that seem too difficult. Administrative law is certainly not unique in this regard—courts often find procedural reasons or alternative substantive grounds for making decisions that allow them to avoid a thorny issue. But a judicial refusal to answer important religious-liberty questions risks embroiling everyone—the parties, the courts, and the country—in litigation and controversy that may last much longer than need be. That is harmful to all involved.

The contraceptive-mandate cases again provide a useful illustration. In 2020, the Supreme Court had the chance to answer, fully and finally, the straightforward question at the heart of the conflict: whether the Religious Freedom Restoration Act requires an exemption from the mandate for religious non-profits. But the Court chose not to answer that question, instead focusing on the narrower administrative-law question of whether the agency had the power to create such an exemption in the first place. At the time, Justice Samuel Alito wrote that the Court’s failure to address the underlying question “will prolong the legal battle in which the Little Sisters have now been engaged for seven years.”

Time has proved Justice Alito right. More than two years later, the Little Sisters are still embroiled in litigation against eighteen state governments over the contraceptive mandate. Worse, the conflict has been left to rage on. As a candidate in 2020, Joe Biden promised to rescind the current exemption and “restore the Obama-Biden policy that existed before the Hobby Lobby ruling.” And in 2022 the Biden administration continues to say that it plans to come out with yet another version of the contraceptive mandate soon. The Supreme Court’s failure to decide the central religious-liberty question has allowed the issue to fester, seemingly without end.

While religious parties, the courts, and the country as a whole may suffer from narrow administrative rulings that leave these contentious disputes unresolved, there is a related danger for those who advocate a more limited conception of religious freedom. Sometimes, administrative-law remedies will be much broader than anything that religious-liberty law would provide. If a court eventually strikes down the contraceptive mandate using the major-questions doctrine, the remedy will be that the mandate is eliminated entirely for all employer health plans, not just those offered by religious objectors. That is much stronger medicine than a decision based solely on religious liberty, which typically would only provide a narrow religious exemption while leaving the mandate in effect for the vast majority of other employers. In short, sometimes a government’s refusal to allow for religious exemptions may invite litigants and courts to reach for a stronger and broader administrative-law result that will do more damage to the government’s claimed interests.

Alexander Hamilton once wrote that the structural protections of the Constitution were “in every rational sense and to every useful purpose” a Bill of Rights. Like Hamilton, Adam White correctly sees the value that structural protections like administrative law can provide to the protection of individual liberty. Thankfully, however, we also have a Bill of Rights and other express protections for individual liberty. It is important that we continue to use them too, as they provide a targeted mechanism for directly resolving our pluralistic society’s most contentious disputes.

The Peril and Promise of Administrative Law for Religious Freedom
1. Essay

The Overseers of American Religion
3. Response

The Clash Between Technocracy and Religion
4. Last Word

The Hydraulic Pressures on Religious Liberty