Israel: The Canvas on Which American Jews Project Their Hopes and Fears

From the founding years to the recent years of strength, American Jews have always seen in Israel what they wanted to, not what was necessarily there. 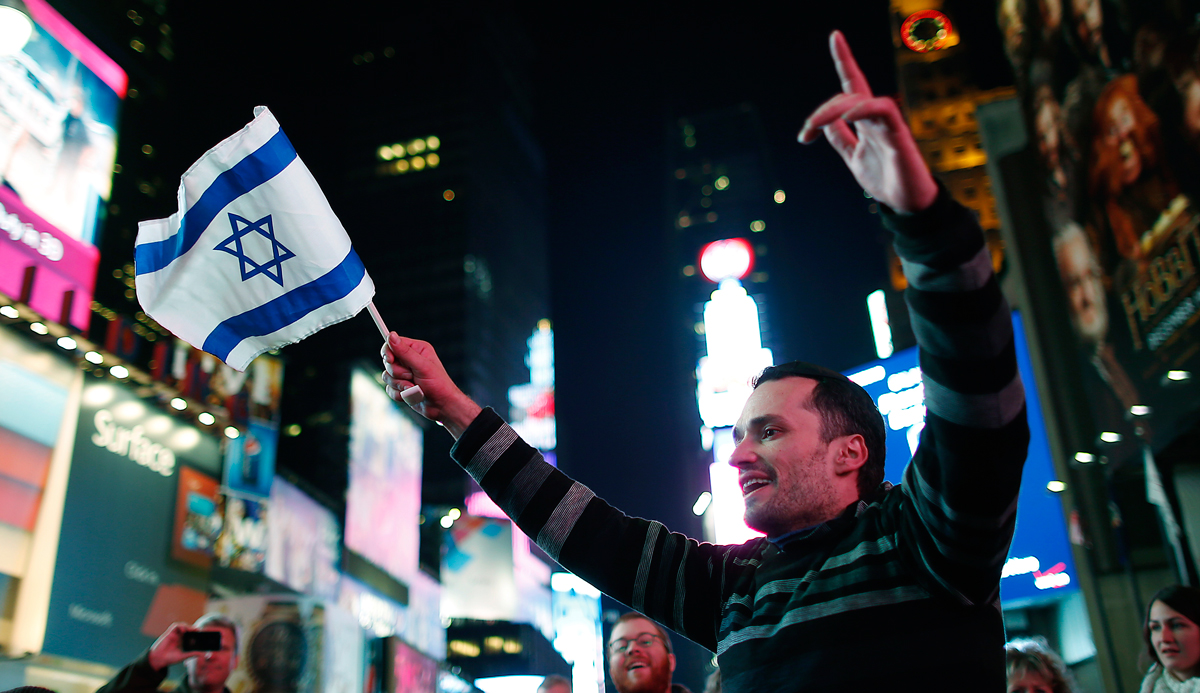 
Jack Wertheimer is professor of American Jewish history at the Jewish Theological Seminary. His latest book, The New American Judaism: How Jews Practice their Religion Today, has been issued recently as a paperback.

“The problems begin at home, and so do the solutions,” concludes Elliott Abrams in his trenchant analysis of why growing numbers of American Jews are drifting apart from Israel. He most certainly is correct: the drift described in his essay tells us far more about the internal dynamics of American Jewish life than about Middle Eastern realities.

Abrams might have added: ’twas ever thus. Israel has always been a canvas upon which a good many American Jews have projected both their aspirations and their insecurities. That was the case during the early years of statehood when American Jews saw themselves as indulgent patrons of their somewhat primitive Israeli clients. It was so when American Jews drew strength and pride from the military prowess of the Israel Defense Forces, in whose feats of battle they did not have to shed an ounce of blood. It has been true more recently as Birthright Israel has sent over a half-million young Jewish adults on free trips to Israel in order to help them reconnect with their Jewish identities and return as more engaged Jews in America. And—alas—it continues to be the case today, when, absorbing the hostility directed at Israel by journalists, academics, and other elites, growing numbers of Jews have found it harder to summon positive reasons for identifying with the Jewish state.

And why, after all, should they? Does any other group in America identify as strongly with the inhabitants of a foreign country? True, when an earthquake or other catastrophe strikes abroad, altruistic Americans send money and supplies to help the victims. But the longstanding preoccupation of sizable numbers of American Jews with the Israeli condition is probably without parallel in the American historical experience.

Such unnatural concern can only be driven by powerful convictions: a shared religious faith, a deep grasp of the common fate binding all Jews, and an intuitive understanding of the profound link between the two countries’ shared values and interests. Fortunately, a majority of Americans of all faiths partake of that last-named intuition. Unfortunately, growing numbers of American Jews, as Abrams observes, have become so deracinated that they no longer associate themselves with any of these convictions.

For my part, I would distinguish among different types of dissenters. It is evident from opinion research that growing numbers of American Jews are enamored neither of Israel’s present prime minister nor of specific policies formulated by Israel’s government. I am not especially put off when American Jews debate the merits of particular Israeli policies; Jews, after all, are a notoriously contentious and verbal people. What makes the contentiousness worrisome is not disagreement but the breakdown of civil conversation in communal circles.

In any event, far more problematic from my perspective is the growth of three different sub-populations. The first consists of outright, self-styled, vocal anti-Zionist Jews who believe Israel’s creation was a terrible mistake that must be rectified through its dissolution; once considered an extinct species, they now have reemerged more brazen than ever. They are abetted, second, by coreligionists who claim their goal is to save Israel from itself, a goal they pursue by singling it out, from among all nations on earth, for boycott, divestment, and sanctions (BDS). And then, third, are the growing numbers of Jews who claim indifference to Israel’s dilemmas, which in their view amount to no more than (to cite British Prime Minister Neville Chamberlain in an earlier context) “a quarrel in a faraway country between people of whom we know nothing.”

Abrams is spot-on about what is fueling the growth of these three populations. Using data from the 2013 Pew study, he zeroes in on the deleterious impact of intermarriage. In the aggregate—there are important exceptions—intermarried Jews and their offspring are far less connected to Israel than are in-married Jews, and it is unsurprising that such indifference has grown as rates of intermarriage have spiraled upward. Indeed, though Abrams does not mention it, some of the most virulent BDS and anti-Zionist Jews are themselves intermarried or the children of intermarried parents. To understand this phenomenon fully would take us into the realm of social psychology.

Another major factor, as Abrams again notes, is the spread of the tikkun olam ideology. In its benign version a justification for mild do-goodism, in its more militant form this cluster of attitudes supports a commitment to left-wing causes marching under the banner of “social justice” and in the name of “Jewish values.” Tracing the origins of this obsession to the Reform movement, Abrams registers its spread to other sectors of the community (including even certain precincts of Orthodoxy).

Why has this disposition taken hold? Speaking off the record, Reform rabbis offer straightforward answers. “It requires so little of people and is so non-threatening,” says one, confirming as it does their pre-existing politics combined with their desire to aid the less fortunate. To another, it enables rabbis to “avoid waging battles the synagogue cannot win”—namely, the battle to deepen congregants’ religious observances.

Missing from all the shallow sloganeering, however, is any appreciation of what “Jewish values” might actually call for. To the contrary, the universalization of every aspect of Judaism has come at the expense of concern for the particular needs of the Jewish people and the state of Israel. To take a recent example: just before Purim this year, American Jewish World Service (AJWS), one of the most successful tikkun olam initiatives, put out an ad urging people to mark the holiday by fighting “the Hamans of poverty,” specifically by aiding the needy in “the developing world.” Needless to say, Jews living at or below the poverty line were not AJWS’s objects of concern; neither was the threat from the actual Hamans sitting in modern-day Persia and elsewhere who are out to destroy Israel and murder Jews everywhere. Nor are Jews fleeing from rabid anti-Semitism in France, coming as they do from a “developed” country, regarded as worthy of help. (Unfazed, the same organization has now released a new Haggadah that does for Passover what it did for Purim.)

This small but hardly unique example may help shed some light on the solutions that Elliott Abrams seeks to the American Jewish problem.

Much has been written in recent years about the hostility toward Israel encountered by Jewish students on college campuses. And, indeed, the pathologically reflexive anti-Zionism among far too many professors and students inevitably contributes to the drift Abrams describes. It’s hard to withstand political correctness, especially in view of the price exacted from non-conformists—as we read almost daily in dispatches from colleges and universities.

But to focus exclusively on these external forces misses the internal ones, and in particular the way too many teachers of Judaism itself misrepresent “Jewish values.” All too often, Jewish schools, camps, adult-education classes, and media, not to mention rabbinic sermons, reduce Judaism to bumper-sticker slogans that use Jewish texts as window dressing in support of fashionable ideas and ideologies or, as is common among some of the wealthiest Jewish philanthropists, invoke the “Jewish value” of tzedakah to justify funding every conceivable cause except one that helps Jews.

Is it any wonder, then, that the campaign to universalize every aspect of Judaism has inspired growing numbers to shirk their responsibilities to their own coreligionists and stripped them of the capacity to empathize with Israeli Jews who live in a neighborhood considerably more dangerous than brownstone Brooklyn or the Edenic communities of the San Francisco Bay?

Israel: The Canvas on Which American Jews Project Their Hopes and Fears
1. Essay

If American Jews and Israel Are Drifting Apart, What's the Reason?
2. Response

How American Jews Have Detached Themselves from Jewish Memory
3. Response