Cupping in Jewish Life and Law

A form of folk medicine now in the news thanks to Olympic athletes like Michael Phelps, cupping has a long history in Judaism. 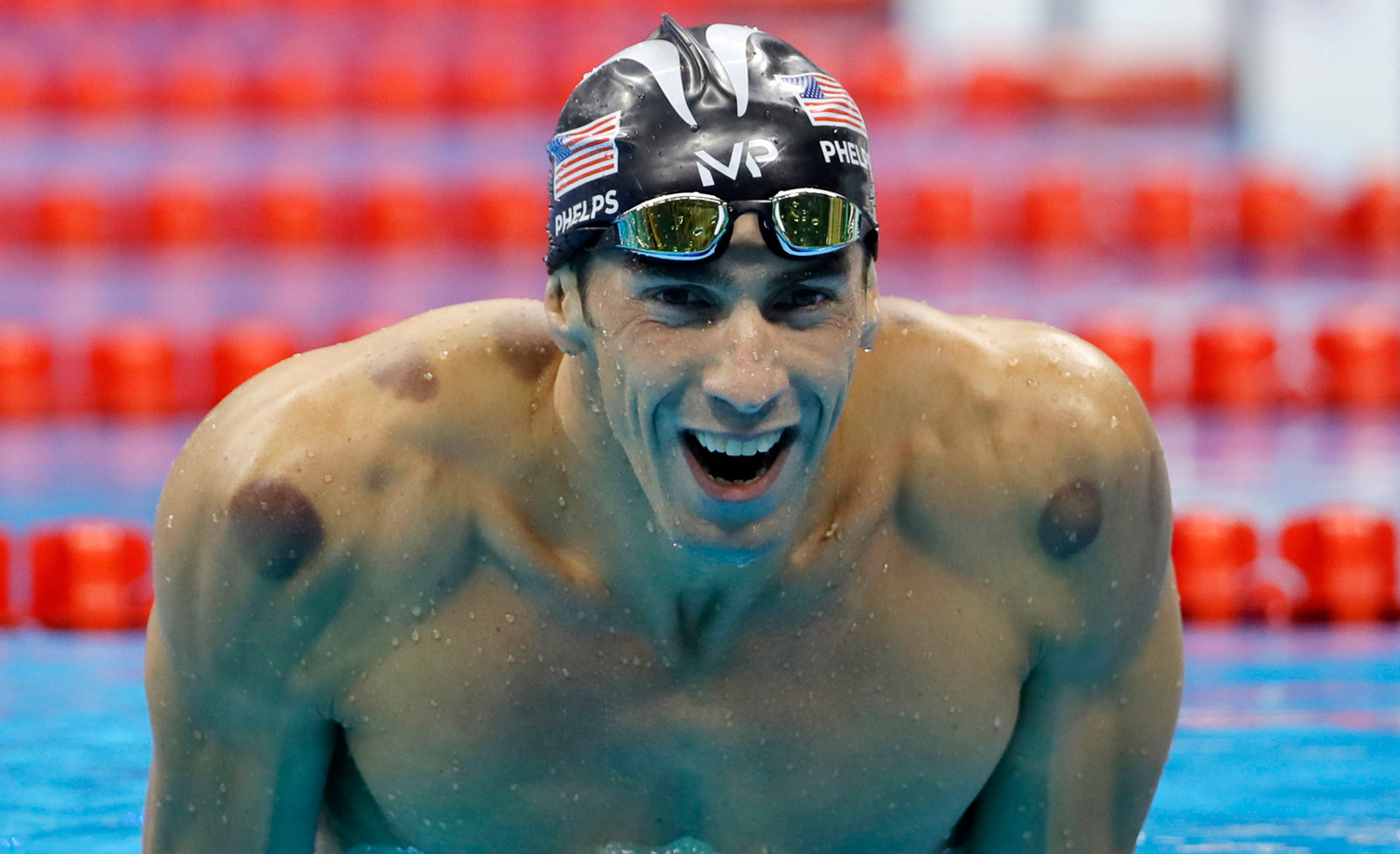 Cupping marks on the shoulders of Michael Phelps as he celebrates winning the gold medal in the men’s 200-meter butterfly at the 2016 Summer Olympics in Rio de Janeiro, Brazil. AP Photo/David J. Phillip, File.

The gold-medalist swimmer Michael Phelps has been pictured in the news media with purple bruises from cupping glasses on his upper body. I knew there is a saying in Yiddish about such cups, but I can’t remember it—perhaps something with the word bankes that has a meaning like “Does it help?” Would you know what it is?

Naomi Miller is on the right track. The expression she’s looking for is es vet helfn vi a toytn bankes, “It will help as a cupping glass helps a dead man”—in other words, not at all. This expression is not a criticism of cupping, a form of folk medicine once common in Yiddish-speaking Eastern Europe. It simply observes that if you hope to benefit from such treatment, it’s first a good idea to make sure you’re still alive.

The Yiddish word banke comes from Polish bańka, a soap bubble or cupping glass. Cupping is said to have started in China thousands of years ago, but wherever it started, it eventually spread to much of the world, including the Middle East and Europe. Practiced in two forms known as dry cupping and wet cupping, it involves heating small cups of glass, clay, or other some material and placing them tightly against the patient’s body, so that as the air within them cools and contracts, a partial vacuum is created that sucks the skin outward and ruptures the small capillaries beneath it.

The released blood causes the black-and-blue marks that were photographed on Michael Phelps and—or at least so goes the theory, dismissed by most, though not all, of today’s doctors—drains local toxins, help cure various skin conditions, relieves pain and muscle ache, and improves muscle tone. In dry cupping, this is the entire procedure. In wet cupping, small cuts or incisions are made after the cup is removed, and the skin is then cupped a second time to draw the released blood from the body

There are other Jewish terms for cupping glasses besides bankes. The medieval Spanish Hebrew poet Yehudah Alḥarizi, referring to the wet cupping that was more commonly resorted to in the Muslim world in which he lived, called them kosot s’ritah, “cutting” or “incision” cups. In a Hebrew medical work, the noted German-born and Polish-and-Italian-educated Jewish physician Tuvia Katz (1652-1729) called them k’ley metsitsah or “sucking vessels,” adding that they were known in Italian as ventosi and in German as shrepenkep.

Ventosa, the Italian word for a cupping glass to this day, comes from vento, wind, and engendered today’s standard Hebrew term of kos ruaḥ, “wind cup.” Schrepenkep is Tuvia’s 17th-century version of the German word for cupping glasses, Schröpköpfe, which originally meant the same thing as did Alḥarizi’s kosot s’ritah. In Tuvia’s words:

We use [cupping glasses] for all illnesses occurring between the skin and the flesh beneath it; for all forms of psoriasis; for all muscle and blood conditions; and for [skin] irritations. In cases where we hesitate to resort to blood-letting, as with pregnant women and the infirm, we prefer incision and sucking cups, and sometimes we use sucking cups without incisions, making do with removing the toxic substances from their place.

The distinction between wet cupping and dry cupping was also dwelled on in rabbinic literature, in which it was debated whether there was a halakhic difference between the two methods. The question arose in connection with a passage in the talmudic tractate of Shabbat regarding blood-letting—a procedure, potentially more dangerous than cupping, in which a patient is bled by opening a vein. (Unlike cupping, which seems to have been unknown to the rabbis of the talmudic period, blood-letting was then commonly practiced.)

In this passage there is a ruling forbidding the letting of blood on the eve of the major Jewish holidays because of the belief that a demon named Tibuaḥ (literally, “Butchery”) lay in wait for Jewish blood then. Tibuaḥ was thought to be especially active on the eves of Shavuot, the day of the giving of the Law, and Hoshanah Rabbah, the final day of Sukkot on which God’s Yom Kippur judgments become irrevocable. This is why in the Mishnah Brurah, the great halakhic commentary on the Shulḥan Arukh by Yisrael Meir Cohen of Radin (1839-1933), better known as the Ḥafets Ḥayyim, we find the comment that “the custom is not to let blood on any holiday eve, . . . but shrefn, which is also known as bankes or kep zetsn [“placing cups”], is permissible except before Hoshanah Rabbah, which is the day of judgment, and the eve of Shavuot, when one must be especially strict.”

But does this stricture apply only to wet cupping, which is more akin to blood-letting, or does it apply to dry cupping as well? Here, the authorities disagree. In a 20th-century halakhic work on the subject of blood donations, the Jerusalem rabbi Eliezer Yehudah Waldenberg notes that two prominent 19th-century Russian rabbis, Moshe Yehoshua Yehudah Leib Diskin (1817-1898), and Yisrael Noaḥ Schneerson (1816-1883), took opposed positions. Diskin, anticipating the Ḥafets Ḥayyim, held that all cupping was permissible before all holidays other than Shavuot and Hoshanah Rabbah, whereas Schneerson ruled that it was not. And yet Schneerson, too, Waldenberg points out, thought the prohibition applied “not to the use of regular bankes, but to the kind in which much blood is released after the cup is removed from its place”—that is, to wet cupping alone.

Of all these cupping terms, only bankes and kosot ruaḥ have survived in the Jewish world. Zeh ya’azor k’mo kosot ru’aḥ l’met is the Hebrew translation of es vet helfn vi a toytn bankes, and you can hear it used in Israel today for any plan or project that has as much chance of succeeding as does a dead man of being cupped back to life.

Cupping in Jewish Life and Law