A linguistic investigation prompted by a meal in Rome of carciofi alla giudia. 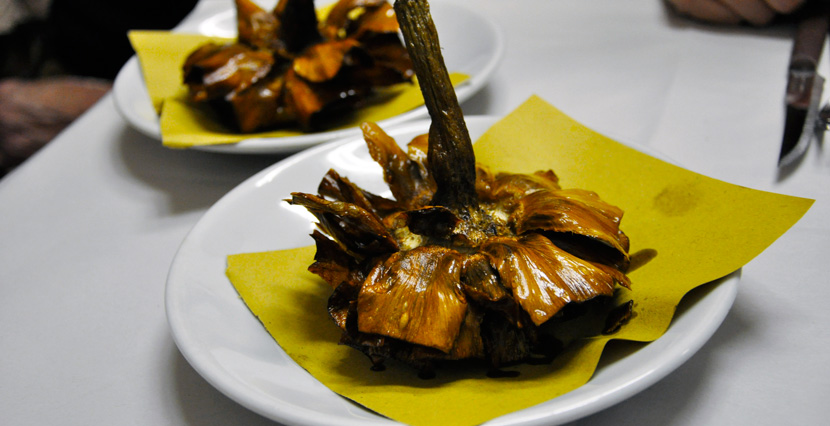 When in Rome, do as a tourist does—and so, when my wife and I recently spent a week in the Italian capital, we made sure to eat carciofi alla giudia, artichokes Jewish-style, in the neighborhood of the old Roman Jewish ghetto. Carciofi alla giudia are distinguished from carciofi alla romana, artichokes Roman-style, by being deep-fried rather than stuffed and braised. Apart from using a lot of oil, they’re not hard to make, but they do have their demands, such as choosing tender or baby artichokes that can be eaten in their entirety, flattening their leaves either before or halfway through frying by pressing them against a hard surface, and removing them from the oil at just the right moment, when they’re crunchy-crisp but not burned. They’re then plucked and eaten with one’s hands, and although I wouldn’t call them a great delicacy, with a tuna fish sandwich (which you can’t get in Rome) they’d be just as good as potato chips.

Carciofi alla giudia are a Jewish contribution to Italian cooking that goes at least as far back as the 15th or 16th century, when the cultivated artichoke arrived in Rome from Naples and points further south. Some food writers claim that they were a favorite dish for breaking the Yom Kippur fast, but I have my doubts about that. In the first place, they take more time to prepare than a hungry Jew back from synagogue would want to wait. And even more to the point, the large buds of the artichoke, which are the part of the plant that we eat, ripen in springtime, after which they flower in a big burst of thistly purple and are inedible. In an age before refrigeration, for which I can thank the carciofi I ate in Rome, they would hardly keep until Yom Kippur, even in a cold cellar. Indeed, they would wilt long before Tisha b’Av.

Our English “artichoke” is an interesting word. You wouldn’t guess by looking at it that it comes from Arabic khurshuf. But it was the Arabs who brought the cultivated artichoke to Europe from North Africa in the Middle Ages, and they did so by introducing it into Spain, where the word khurshuf entered Spanish, together with its Arabic definite article of al, as alcarchofa. In this, it was like dozens of Arabic words borrowed by Spanish, some of which eventually made their way into English, such as alchemy, alcohol, alembic, alfalfa, algebra, algorithm, alkaloid, and almanac. When the Italians took the artichoke from the Spaniards, they called it alcachofa, but eventually the al- dropped away. In some northern Italian dialects, however, it survived while changing to ar-, as in Lombard archiciofo.

From northern Italy, the artichoke moved on to France as an artichou (perhaps under the influence of chou, cabbage, to which the artichoke bud bears a vague resemblance) or artichaut. Lastly, it crossed the English Channel and changed again, becoming “heartychock” because of its succulent core or “heart”; then “heartychoke” because the heart turns to a prickly fuzz as it begins its metamorphosis into a flower; and finally, the compromise of “artichoke.” Though you won’t find the definition in standard dictionaries, “choke” has been for centuries the accepted English term for the maturing artichoke’s inedible core. This is folk etymology at its most creative.

In Israeli Hebrew, an artichoke is an artishok, with the stress on the last syllable. Ancient rabbinic Hebrew, however, had a different word: kinras. This derives from ancient Greek cynara, from which come both modern Greek ankinára and the cultivated artichoke’s botanical name of Cynara scolymus. By contrast, the plant’s wild, uncultivated form is known as Cynara cardunculus, Latin carduus—from which, via French, comes our English “cardoon”—denoting a thistle.

Cynara cardunculus grows all over the Mediterranean world and comes up for discussion in the Mishnaic tractate of Kilayim, which deals with the biblical prohibition, “Thou shalt not sow thy vineyard with diverse seeds.” Since the rabbis took this to refer only to seeds of edible plants, the question arose whether the kinras could be allowed to grow in a vineyard. Kilayim ruled that it could not be, presumably because its fleshy stem, though not greatly prized, was sometimes eaten.

As for ancient Greek cynara, the food writers tell us its source is a Greek myth that relates how Zeus fell in love with a beautiful young maiden, took her to live with him on Olympus, felt rejected when she longed to return to her family, and flung her down in anger onto the island of Kinaros, where she turned into a gorgeously flowering artichoke whose seeds spread to the rest of Greece. But the source of this purported myth is never given and I haven’t been able to find it anywhere, not in Bullfinch’s Mythology, not in Robert Graves’s compendious The Greek Myths, and not in Ovid’s Metamorphoses—and such a tale, one would think, isn’t one that Ovid would have wanted to miss out on.

Kinaros itself is a tiny island in the western Dodecanese with a current population, according to official statistics, of two people, one of whom perhaps invented this story to draw tourists away from Rome. It’s about as plausible as carciofi alla giudia being eaten after Yom Kippur.