Rembrandt and the Dangers of Vision

To perceive without seeing, and to utilize sight to sharpen rather than to detract from insight, is an essential Jewish task. This is the challenge that Rembrandt allows us to glimpse. 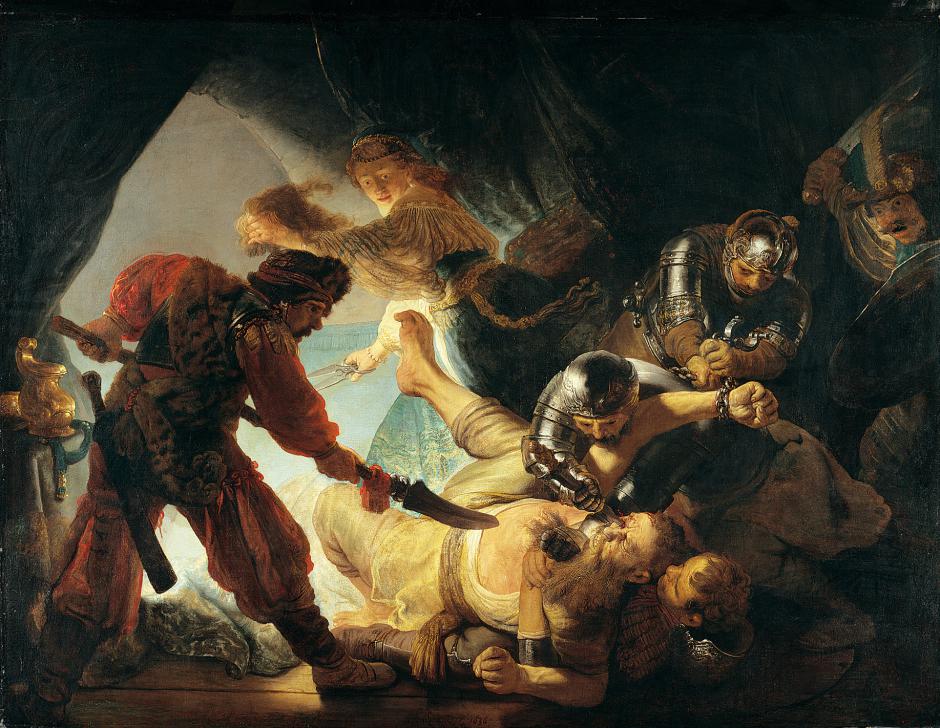 Rembrandt’s The Blinding of Samson, 1636. Wikipedia.


Meir Soloveichik is the rabbi of Congregation Shearith Israel in New York and director of the Straus Center for Torah and Western Thought at Yeshiva University.

In his many rendering of scenes from the Hebrew Bible, Rembrandt van Rijn—the first great Western master actually to have lived among Jews—made artistic choices notably different from those of his mainly Catholic predecessors. Whether those choices can be ascribed to Rembrandt’s interaction with practicing Jews, to the 17th-century Dutch Protestant interest in Judaism in general, or to Rembrandt’s own careful reading of the biblical text is a fascinating question in itself. But of no less interest is what his visual renderings of the biblical story contribute by way of further understanding of the Bible’s own larger meanings.

A good example is Rembrandt’s 1636 portrayal of the tragic end of the Israelite hero Samson, whose full story is told in the book of Judges (13:1-16:31) and the circumstances of whose birth are recounted in the haftarah for this week’s parashah of Naso (Numbers 4:21-7:89).

In The Blinding of Samson, the Israelite hero’s writhing body, one leg extended in the air, offers an almost perfect parallel to, and is clearly modeled on, Prometheus Bound (1618), a painting by Peter Paul Rubens of the Greek hero chained to a rock and twisting in agony as an eagle gouges out his entrails. Rembrandt presents a similar scene in order to tell a very different story. Rubens’ Prometheus is being remorselessly punished for having stolen the fire of the gods. Samson, endowed with Herculean strength, might indeed be thought of as the biblical figure most closely approximating a Greek hero, but his story remains, in the end, a morality tale: he is a man who has brought about his own undoing. Rembrandt’s close modeling of Samson on Rubens’ Prometheus thus highlights not only a similarity but a contrast: a distinction between the Hebraic and the classical worlds that Rembrandt understood all too well.

The Israeli writer Yitsḥak Kariv fomulates the distinction this way:

Unlike in Greek tragedy, [biblical] man is brought to destruction through no arbitrary decree of the gods but through his own willfulness. God is beneficent; man, even a man charged with a specific [divine] mission, brings about his own downfall. The Torah gives free choice to men, including one whose destiny has been marked out for him. He must show himself worthy of the trust reposed in him through his free choice of the right path. Otherwise the partnership between him and God is broken.

How is this distinction brought home in visual terms? As Jacob Wisse has pointed out, many artists, including Rubens and a younger Rembrandt himself, had almost invariably depicted Samson’s denouement by focusing on the scene with Samson asleep and the Philistine temptress Delilah shearing his locks and thereby robbing him of his physical power. And that makes sense: after all, Samson’s hair is both the source and the symbol of his wild strength; its shearing is therefore at once the source and the emblem of his defeat. Here, however, while making a background reference to that earlier moment, Rembrandt focuses instead on the blinding that follows upon it. And that makes deeper sense: for the mature Rembrandt, for whom character counts as much as image, Samson’s eyes are the real embodiment of his undoing.

Delilah, after all, is not the first foreign Philistine woman whom Samson has looked upon and lusted for:

As sight draws Samson to the woman of Timnath, so it eventually draws him to a Philistine prostitute and ultimately to Delilah. In the context of his mission, Samson’s demand to his parents, based on what is pleasing in his eyes, is especially shocking: this is the man foreordained by God to protect Israel from its enemies, and here he is, openly consorting with them. Rabbi Moshe Lichtenstein of Israel’s Har Etzion Yeshiva put the point strikingly to his students, who serve in the IDF: it is as if “the commander of the Gaza division of the Israeli army had associated with a Palestinian prostitute, or as if the head of the Ramallah brigade wanted to marry one of the natives of [the Palestinian town of] Bitunya.” Quite apart from the issue of intermarriage, said Rabbi Lichtenstein, “we are talking about an issue of national security.”

From this perspective, one might therefore say that Samson’s defeat—his blinding—was something he should have seen a mile off. And that is precisely how the talmudic rabbis understood it:

In this passage the rabbis are not only emphasizing a truth about Samson but alluding to a fundamental tension in the Jewish approach to the image—a tension that pervades the entire Torah. In contrast, once again, to the Greek approach, Judaism stresses that more critical than physical sight is moral vision, from which one’s eyes can dangerously distract one. It is a faith founded at Sinai, where, Moses reminds the Israelites,

This is hardly to deny the allure, or the value, of the aesthetic; to the contrary, it is to acknowledge the aesthetic dimension as an essential feature of life, if one that must also be harnessed and directed. In Numbers 15, the Israelites are charged with making fringes for their garments in a beautiful pattern of white and azure threads. In constantly reminding them of the blueness and whiteness of heaven itself, the fringes at once embrace the visual and impart a caution: “And you will see it, and remember the commandments of the Lord, and not go astray after your heart and your eyes.” For the Torah, the function of the image is to alert us to the truth that sight is critically important, but more important is insight.

Which brings us back around to Rembrandt’s The Blinding of Samson: a visual feast of color and form that is about, precisely, the dangers of vision. In this terrifying scene of Samson’s condign punishment for his moral blindness, Rembrandt, as Simon Schama suggests, hints at a kind of “redemptive immolation”: “Now that [Samson’s] eyes were out, he could, at last, see things right.” And, seeing things right, in a last gargantuan effort to make himself right also with God, the grievously tortured Samson will pull down the pillars of the Philistine temple upon himself and “upon the [Philistine] lords and all the people that were therein.”

Nor is this the first time Rembrandt has pondered, through imagery, the ability of moral vision to see what the naked eye cannot. As a twenty-three-year-old in Leiden, he painted a self-portrait, The Artist in His Studio, in which, rather than giving himself human eyes, he presents himself, in Schama’s words, with “blackened o’s that seem to absorb rather than reflect light,” thereby emphasizing that what made him special was not what he could see but what he could perceive:

They have no convexity, these eyes. . . . They lie flat against the face, glitterless. They are, literally, black holes, cavities behind which something is being born rather than destroyed. . . . [I]n the deep interior space of the imagination, the real action is going on, wheels within wheels; the machinery of cogitation whirring and flying like the delicately interlocking parts of a timepiece. An idea, this idea, is in genesis.

To perceive without seeing, and to utilize sight to sharpen rather than to detract from insight, is an essential Jewish task. This is the challenge that Rembrandt allows us to glimpse, and directs us to ponder, in the heartbreaking image of a hero’s blinding.

More about: Arts & Culture, Rembrandt, Rembrandt and the Jews

Rembrandt and the Dangers of Vision