Most Wars Don't Get Named Until Years After the Fighting Is Done. Others, Like the Yom Kippur War, Are Different.

Unlike, say, “World War I,” the “Yom Kippur War” caught on from the start and never faded. Aside from its naturalness, it has an associational richness that no other names could match. 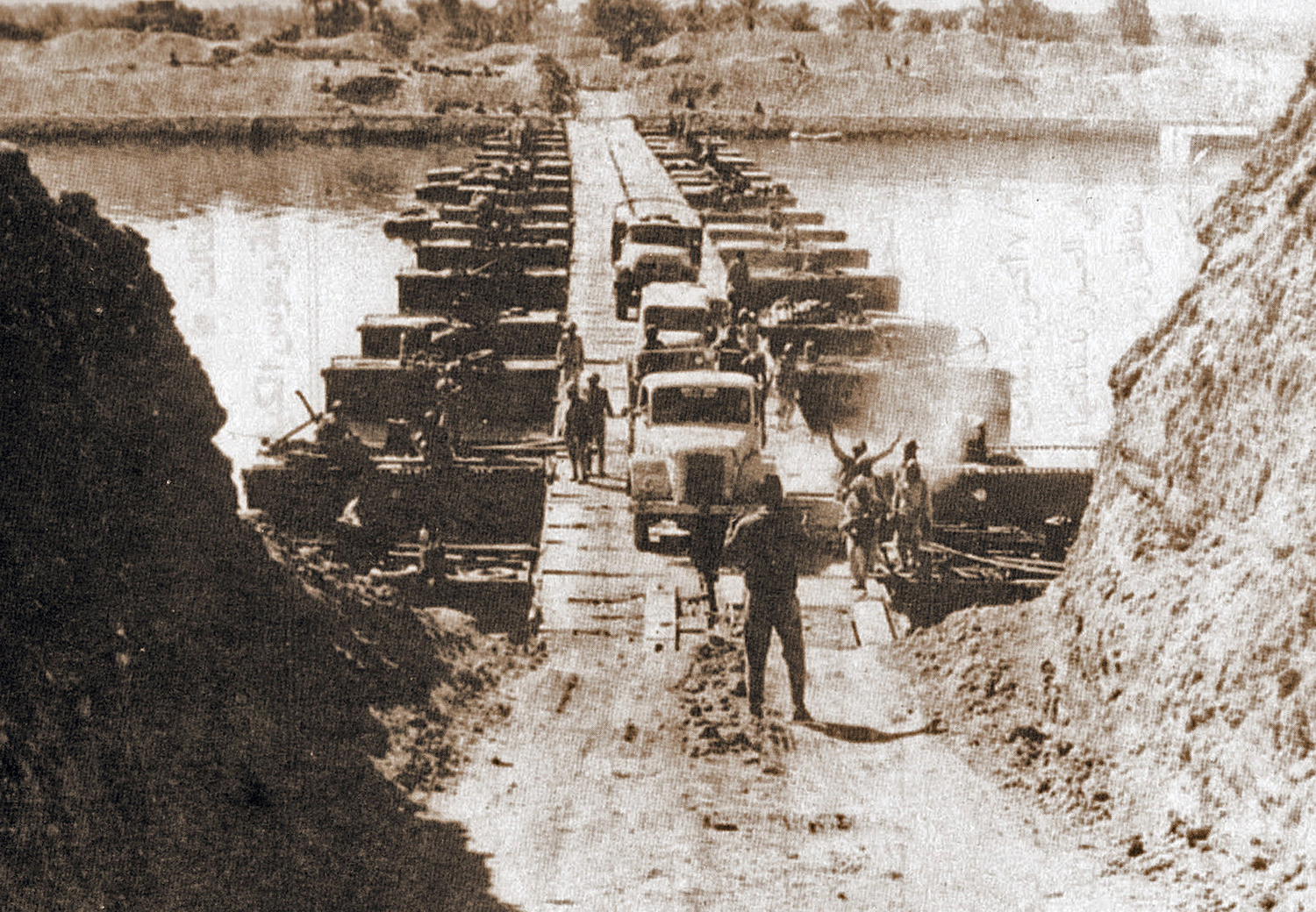 Egyptian military trucks cross a bridge laid over the Suez Canal on October 7, 1973 during the Yom Kippur War. CIA via Wikipedia.

Wars, like other events in history, are often given their names long after they have taken place. Hector and Achilles did not know they were fighting the Trojan War. The Hundred Years War, which went on between the English and the French from the mid-14th to the mid-15th century, was first called that in the 19th century. And World War I, needless to say, could not have been World War I prior to the outbreak of World War II. (Before then, it was generally known in English as “the Great War.”) Americans still do not have names for what they refer to ad-hoc as “the war in Iraq” or “the war in Afghanistan,” leaving the task instead to future historians.

Not so the Yom Kippur War. One would have to comb old Israeli newspapers to discover exactly when the three weeks of fighting that broke out on October 6, 1973 with surprise Egyptian and Syrian attacks came to be known in Hebrew as milḥemet yom kippur or milḥemet yom ha-kippurim. It certainly happened before the hostilities had ended, though perhaps not in their very first days. In a televised address to the nation on October 10, a shaken Moshe Dayan, then Israel’s defense minister, did not call it by a name. “We are now in the midst of a war,” he said, “that is different from its two predecessors, the Six-Day War and the Kadesh [i.e., Sinai] Campaign. . . . It will be a war of many days, of much blood.”

The two previous wars mentioned by Dayan are contrasts in this respect. The army codename for the 1956 war in Sinai was mivtsa Kadesh, “Operation Kadesh,” after the biblical site of Kadesh-Barne’a on the Israeli-Egyptian frontier, and so it was initially called by Israel’s government and media. Only gradually did it also begin to be referred to as mivtsa Sinai (“the Sinai Campaign”) or milḥemet Sinai (“the Sinai War”), and the latter two terms are still used interchangeably.

Similarly, the military codename for Israel’s 1982 assault on the Palestine Liberation Organization in Lebanon would at first cause that operation to be known as milḥemet sh’lom ha-galil, “the Peace of Galilee War.” In time, however, it began to be called milḥemet L’vanon, “the Lebanese War,” which became “the First Lebanese War” after another major round of fighting with Hizballah in southern Lebanon in 2006. And Israelis still have not decided whether to call the 1948 war for the establishment of a Jewish state milḥemet ha-atsma’ut (“the War of Independence”) or milḥemet ha-shiḥrur (“the War of Liberation”). Both are commonly heard.

On the other hand, the “Six-Day War” (milḥemet sheshet ha-yamim) and the “Yom Kippur War” were names that caught on from the start and never faded. Aside from their naturalness, they had an associational richness that no other names could match.

The Six-Day War, like the six days of Creation, was felt by Israelis to mark the beginning of something new and bright with hope. Israel after its stunning victory of June 1967 was brimming with confidence and optimism. “And God saw all that He had done and, behold, it was very good,” says the Bible in its account of the universe’s first week. And so Israelis thought of the week in which they had taken, with relatively few losses, the West Bank of the Jordan, including the old city of Jerusalem, as well as Sinai and the Golan Heights.

Yet just as the bright promise of the six days of Creation leads in the Bible to the catastrophe of the Flood, so that of the Six-Day War led to the trauma of the Yom Kippur War. Never mind that the latter was, from a purely military point of view, a far greater victory. In 1967, it was Israel that surprised the Arabs and routed a shocked and disorganized enemy. In 1973, the shoe was on the other foot. Numerically overwhelmed and in retreat in the war’s opening stage, Israel’s army called up its reserves, rallied, fought back, went on the offensive, and at war’s end was in striking distance of the enemy’s capitals. Few military campaigns in history have seen a more dramatic reversal or spectacular triumph.

But this was not how Israelis experienced it. Although Arab casualties were far higher, the war had taken a toll of over 2,500 Israeli dead and 8,000 wounded, a horrendous figure in a country of barely three million people. And in doing so, it had shattered the illusions created by the Six-Day War—not only the conviction that the post-1967 Arabs would permanently accept their military inferiority and never go to war against Israel again, but the assumption that Israel was a country in good hands whose government and army knew what they were doing.

The confidence of 1967 had turned out to be arrogant pride in 1973; its optimism, the folly of wishful thinking. Although there had been ample indications of the impending Egyptian and Syrian attack, Israel’s leadership had refused to believe it would happen and had not taken the necessary precautions. Menachem Begin, then the leader of the opposition, was speaking for all Israelis when, shortly after the war’s end, he declared in the Knesset:

Grief over the terrible mistake [of not calling up the reserves in advance and/or undertaking a preventive strike] . . . will never cease to haunt us. All would have been different, militarily and politically, were it not for the New Moon to the Tenth’s blindness.

Begin, a master rhetorician, had chosen his words carefully. “The New Moon to the Tenth,” beyn keseh l’asor, is a traditional rabbinic phrase for the ten “days of awe” from Rosh Hashanah to Yom Kippur; the literal meaning of keseh (based on Psalms 81:4) is “covering up,” that is, the disappearance of the old moon at the month’s end before the new moon is sighted. Furthermore, the literary term used by Begin for “blindness,” likuy m’orot, which in Hebrew signifies more a judgmental or moral loss of vision than a physical one, also means “eclipse.” The intended parallelism was painfully apparent: as the light of the moon is eclipsed at the beginning of the ten days preceding Yom Kippur, so was the judgment of Israel’s leaders.

Ever since 1973, Yom Kippur has had a significance in Israel that it does not have in the rest of the Jewish world. Besides being a day of judgment for the sins of the individual, it has been seared into Israeli consciousness as a day of judgment for the nation—one on which a whole country was found guilty of the sin of hubris and made to pay a terrible price for it.

In colloquial Israeli speech, the words yom kippur have come to denote any shocking comeuppance, so that saying that something was someone’s “Yom Kippur” is like saying in English “It was his Waterloo.” There will never again be a Yom Kippur in Israel without this double sense of it, and the day’s heavy somberness is felt even by those who do not relate to it religiously. It will indeed always continue to haunt.

Most Wars Don't Get Named Until Years After the Fighting Is Done. Others, Like the Yom Kippur War, Are Different.