How Should I Spell My Mother’s Name on Her Gravestone?

My late mother Pesya was the youngest child of immigrants to America from Kiev and Odessa, one reader writes. Here’s the story of her name. 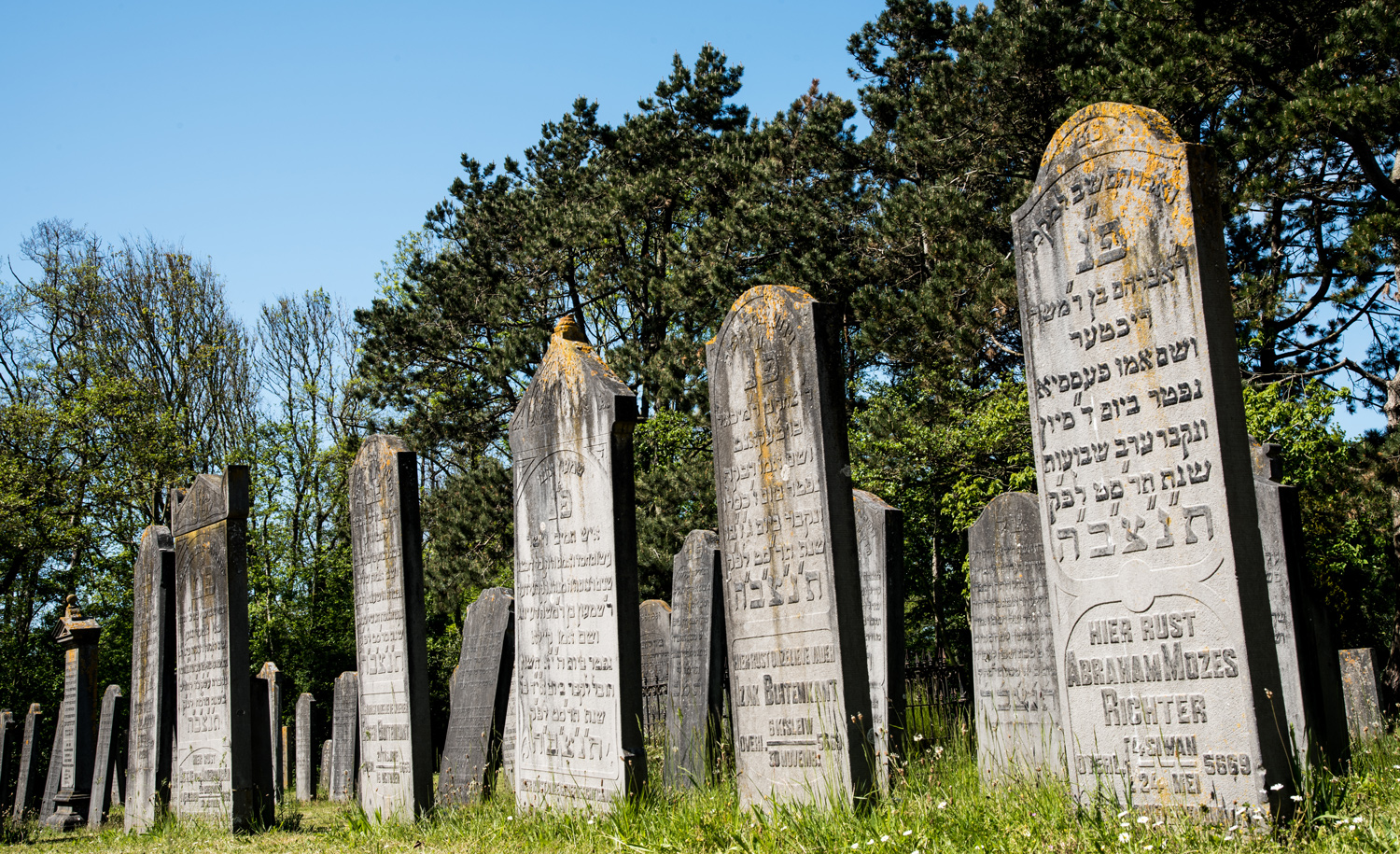 Graves in the Jewish cemetery in Den Helder, the Netherlands. Bert de Boer/shutterstock.

My late mother was the youngest child of immigrants to America from Kiev and Odessa. Her parents and siblings called her Pessy or Peshy. Her two grandfathers were named Peretz and Pesach, and I once thought her real Hebrew name might be Pesach, too, even though that’s a man’s name and would be odd for a woman. Even when she told me it was Pesya, I at first doubted it, since this was a name I was unfamiliar with. Now, I need to know how to spell it in Hebrew characters in order to have it carved on her gravestone. Can you help me?

Spelling Pesya, which indeed is a girl’s name that was not uncommon among Yiddish-speaking East European Jews, is not in itself a problem. It’s פסיה, Peh-Samekh-Yod-Heh. It would only become a problem if it were deemed important that the name on the gravestone be a genuine Hebrew one, because Pesya is a corruption of the Hebrew Basya (in its Ashkenazi form) or Batya (in its Sephardi and Israeli form), spelled בתיה, Bet-Taf-Yod-Heh. And to complicate matters further, though it wouldn’t affect the unvoweled Hebrew on a gravestone, Batya in the vocalized Masoretic text of the Bible appears as Bitya. Moreover, since the Hebrew phoneme represented by the letter Taf was most likely articulated in ancient times like the “th” of English “thin,” the name has traditionally appeared in Bible translations, including English ones, as Bithiah.

The name Batya, Bitya, or Bithiah occurs just once in the Bible, in the book of Chronicles—and it is probably only because Chronicles is the Bible’s least read book that little attention has been paid to a rather astonishing passage in it. This occurs in 1Chronicles 4:16-18, where, in the midst of one of the book’s typically mind-numbing genealogies, in this case one of the tribe of Judah, there are some confusing verses. Here is an excerpt from them as translated by Robert Alter’s The Hebrew Bible, which preserves the old custom of transliterating the Hebrew letter Yod as an English “j”:

Bithiah the daughter of Pharaoh? How could an otherwise unknown figure from the tribe of Judah named Mered, who is never again mentioned in the Bible, have married one of Pharaoh’s daughters? And if such a remarkable match did take place, why don’t we hear of it anywhere else?

Nor is this the only thing in this passage to make us wonder. There are others. For example: is Ezrah (spelled עזרה rather than עזרא, as it is in the book of Ezra) a man or a woman? If a woman, who was her husband? And if a man, who is the “she” of “she conceived Miriam and Shammai and Ishbah?” And more importantly for our purposes: who are the sons of Bithiah? Although the verse that speaks of them creates the impression that they are about to be introduced by name, the text then drops them and continues to other tribal ancestors without returning to them.

A modern Bible scholar would simply assume that this passage from Chronicles is corrupt, words being garbled or missing because of scribal errors or omissions. He would, of course, be struck by the fact that, in the well-known story in the book of Exodus about the infant Moses, there is also a Miriam and a daughter of Pharaoh—but lacking further evidence, he would be at a loss to decide whether the two figures in Chronicles are the same as those in Exodus. Although the possibility that they are not would leave us with an unlikely coincidence, this must be balanced against the fact that, not only does Chronicles fail to mention Moses as one of Miriam’s brothers, but that Yocheved, the mother of the Miriam of Exodus, is from the tribe of Levi, not Judah.

The ancient rabbis, on the other hand, believing as they did that the Bible’s every word is divine, did not have the option of declaring any of it textually muddled. Neither, however, did they feel constrained by evidentiary criteria. When faced with a textual conundrum, their typical response was to resolve it with an imagined story or midrash. This is precisely what they did with the passage in 1Chronicles 4, weaving out of it a fanciful narrative based on association, word play, and other pertinent biblical or midrashic passages. As found in the talmudic tractates of Megillah and Sotah, and most completely, in the midrashic compilation of Yalkut Shimoni, this narrative goes as follows:

The Bityah of Chronicles is indeed the Egyptian princess who found Moses by the banks of the Nile and placed him in the care of his sister Miriam. Her real name was not Bityah but Batyah, meaning “the daughter of Yah” or of God, given her because God said to her: “Just as Moses was not really your son but you called him your son [by adopting him], so I call you my daughter though you are not really my daughter [because you are not an Israelite].” Yet despite being an Egyptian, Pharaoh’s daughter Batyah joined the Israelites when they left Egypt, having already been attracted to their religion. This is why, on the day she found Moses, she had gone to the Nile in the first place—not simply to bathe in it, as the Bible tells us, but, as the midrash puts it, “to cleanse herself of the filth of idols,” having renounced the polytheism she was raised in.

Batya, the midrash tells us, then married the same Caleb son of Yefuneh mentioned in our passage from Chronicles, who was, according to the book of Numbers, the chief of the tribe of Judah at the time of the exodus. And should anyone object that Chronicles tells us that Batya married Mered, the rabbis had an answer for that too: Mered (the name literally means “rebellion,” from the verb marad, to rebel) was Caleb’s nickname, given him because, as one of the twelve spies sent to reconnoiter the land of Canaan, he rebelled by bringing back a dissenting report. This solves the mystery of why Batya’s sons are not enumerated at the end of the passage, since they are already listed at its outset as Caleb’s offspring Irun, Elah, and Naam.

The rabbis thus depict Pharaoh’s daughter Batya as an exemplary character, one who first rescues Moses from perishing as a baby and then relinquishes all the splendors of her father’s palace and pharaonic Egypt in order to wander with the Israelites in the desert. In such high esteem was she held that we are told by the minor talmudic tractate of Derekh Erets Zuta that she was one of nine persons to have entered Paradise in their lifetimes without first having to die. Interestingly, half of this group—including Enoch (who, Genesis tells us, “walked with God”), Abraham’s trusty servant Eliezer, Solomon’s ally Hiram, king of Tyre, and Eved-Melekh the African who saved Jeremiah from death—were, like Pharaoh’s daughter, not of Israelite origin, which tells us something about the rabbis’ appreciation of the figure of the “righteous Gentile.”

How, then, Mr. Appelbaum, should you spell your mother’s name on her gravestone? Both פסיה and בתיה  would seem to be legitimate choices. Both are names that Jews have given their daughters for hundreds of years, each with its own associations—Pesya with the everyday life of Yiddish-speaking Jewry, Batya (if you know your Bible and midrash) with the romantic story of an Egyptian princess. It’s your call.

How Should I Spell My Mother’s Name on Her Gravestone?