“Oh, just some words that my family always says when we enter a church.” 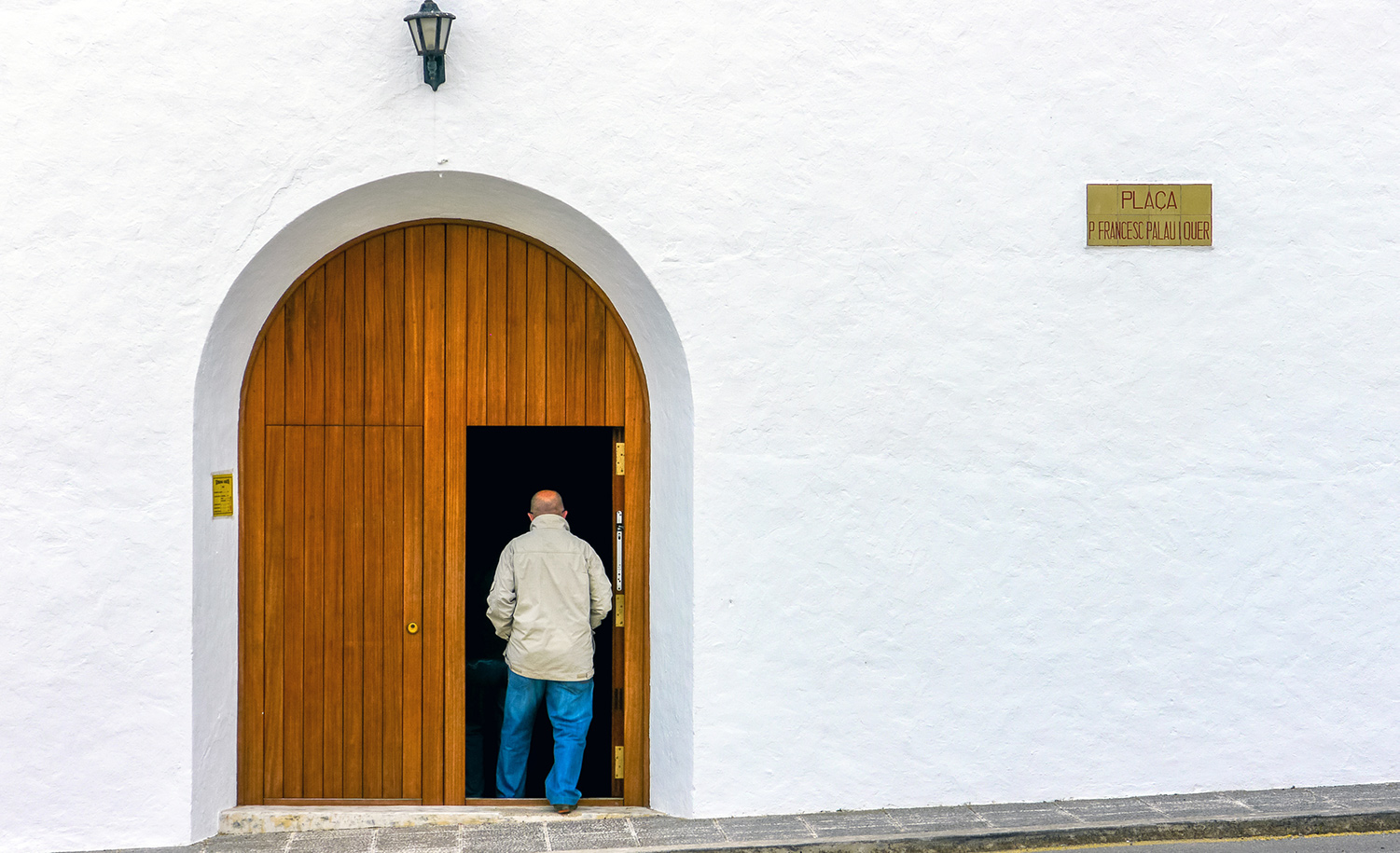 A man going to Mass at a church on the Balearic Islands in Spain. M. Vinuesa/Shutterstock.

While reading this week’s Torah portion of Ekev in the book of Deuteronomy, I was reminded of a conversation I once had with a friend in Israel. The friend, an Israeli physician, told me of a strange experience. He had gone to Madrid, he said, for a medical conference, in the course of which he made the acquaintance of a Spanish colleague, a Madrileño. During a break in the proceedings, his new acquaintance suggested showing him the nearby Catedral de la Almudena, the city’s largest Catholic church, to which my friend gladly agreed. As they entered the cathedral, the Spanish doctor crossed himself and muttered something under his breath. Afterwards, my friend asked him what he had said.

“Oh,” was the answer, “just some words that my family always says when we enter a church.”

“What are they?” asked my friend.

The Spanish doctor was embarrassed. “They’re not really Spanish,” he said.

“But what are they?” my friend persisted.

“They’re sakes sakenu taeb tabenu,” said the doctor. “Just don’t ask me what they mean, because I don’t know. I was taught to say them as a child and I do.”

“Odd, isn’t it?” commented my friend as he finished the story.

Something clicked in my head. “Suppose I told you what those words meant,” I said.

“Suppose you did,” said my friend.

Which brings us to the Torah portion of Ekev.

Ekev, like much of the last part of Deuteronomy, looks both backward and forward, speaking of what the Israelites, who are about to conquer the land of Canaan, have experienced so far and of what God expects of them in the future. Regarding Canaan’s idolatrous inhabitants, they are told by Moses in chapter 7:

Strong words! And, from verse 26, what is “thou shalt utterly detest it and thou shalt utterly abominate it” in the Bible’s Hebrew? Shakets t’shaktsenu v’ta’ev t’ta’avenu—the very same sakes sakenu taeb tabenu of the Spanish doctor!

There are many stories about Spaniards, as well as Latin Americans and Hispanics in the American Southwest, practicing strange customs that are, unbeknownst to them, relics of Jewish life from the period of the Spanish Inquisition and before. Rarely, though, have I encountered one as remarkable. Just think of it. A Jewish family in Inquisitorial Spain converts to Catholicism under duress while continuing to observe Judaism in secret. To keep its neighbors from suspecting its conversion of being a ruse, it regularly attends church services, which causes it shame and guilt for betraying its ancestral religion. There is one thing it can do, however, to ease its conscience. Each time it enters a church, it whispers shakets t’shaktsenu veta’ev t’ta’avenu, “Thou shalt utterly detest it and thou shalt utterly abominate it,” thereby proclaiming its loyalty to Judaism and letting God know that it is acting under protest and has not forgotten His commandment in the Torah portion of Ekev.

Time goes by. The years pass. At some point—who knows if it was sooner or later, within a generation or two or only after centuries?—the descendants of the converted family become sincere Catholics who no longer remember their Jewish roots. When they now cross themselves upon stepping into a church, they do so in piety and reverence. Yet one thing has remained with them: the mysterious words they were taught by their parents to say at the church door. They no longer pronounce these words correctly. They no longer know what they mean. They would be shocked if they did know, for they naturally assume them to be an affirmation, in a cryptic language they do not understand, of their Catholic belief. Sakes sakenu taeb tabenu: a devout Catholic family’s heirloom declaration of faith!

And yet the Jewish ancestors of our Madrid physician were far from unique in associating the verse in Ekev with Christian houses of worship. In the Middle Ages, especially in medieval Spain, to’evah or bet-to’evah, a “house of abomination,” was a common Hebrew term for a church, a usage that survived in some places into modern times, as it did in Judeo-Italian.

Here is a passage from the celebrated author Primo Levi in an essay on the Jewish speech of the Piedmont, his native home, in the early years of the 20th century. Concerning “the few terms that allude [in this speech] to things pertaining to the Catholic faith,” Levi wrote that “the originally Hebraic form [of the words in question] is corrupted much more profoundly [than in other cases] . . . because comprehension by Gentiles would have entailed the danger of being charged with sacrilege. . . . The church (Catholic) was called tônevà, a word whose origins I have not been able to reconstruct, and which probably takes from Hebrew only its sound.”

Levi was wrong about tônevà, which is the Hebrew word to’evah with its pharyngeal ayin (indicated here by an apostrophe) nasalized into an “n,” as it commonly was in Judeo-Italian. (This phenomenon occurs, too, although more rarely, in East European Yiddish. Thus, for instance, the biblical name of Jacob, Hebrew Ya’akov, is Yankev in Yiddish, or in its affectionate form, Yankl.) Levi knew little Hebrew and clearly consulted no one who knew more. This was why he could also say, “Completely cryptic and indecipherable . . . is the term Odo, with which, when it was absolutely unavoidable, one alluded to Christ, lowering one’s voice and looking around with circumspection.” Cryptic, Odo may be. Indecipherable, it isn’t, since it comes from the Hebrew expression oto ish, “that man,” a circumlocution for Jesus found often in Jewish sources.

But Levi was right in pointing out how such words were meant to conceal Jewish feelings from Christians who might overhear them, just as were the words shakets t’shaktsenu v’ta’ev t’ta’avenu of our Spanish doctor’s forefathers. In the end, they succeeded so well that they concealed themselves even from those who still said them.