Why Does the Hebrew Bible So Often Refer to God as "Lord of Hosts"?

Host means army, but who were God’s armies? 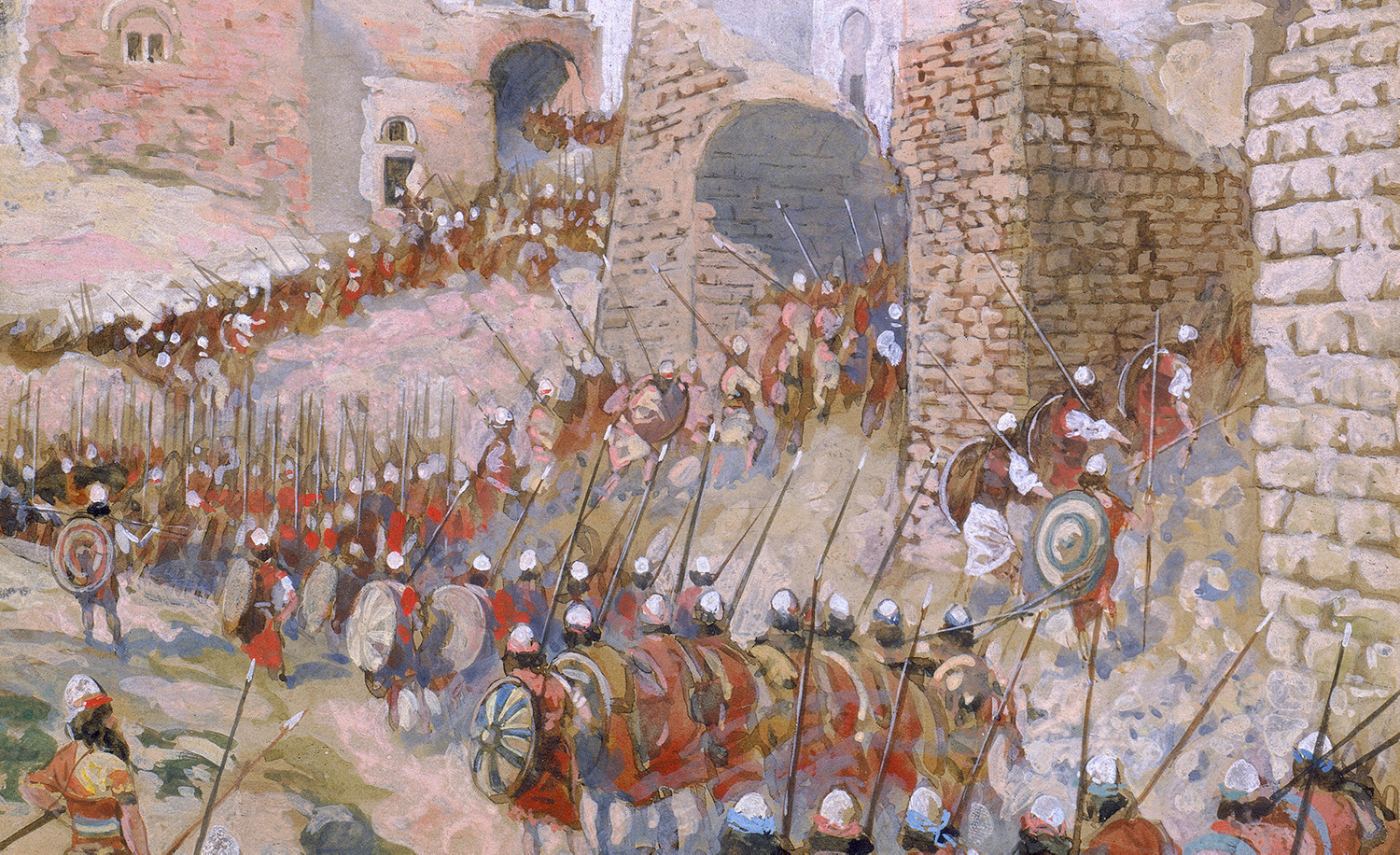 I wonder if you would consider commenting on the meaning of the term “Lord of Hosts,” which seems to appear several hundreds of times in the Torah.

To say that the Hebrew expression adonai tsva’ot, translated by the King James Version as “Lord of Hosts,” appears several hundreds of times in the Bible is a bit of a stretch. By my own count, using the biblical concordance in my possession, I arrive at about 140 such occurrences. Still, that’s enough to make the expression a very common one. Let’s take a look at it.

The word adonai is composed of the noun adon, “lord” or “master,” and the possessive, first-person, pluralizing suffix –ai. Thus, ḥaveyr, “friend,” ḥaveyrai, “my friends”; kova, “hat,” kova’ai, “my hats,” etc. Grammatically, therefore, adonai means “my lords” or “my masters,” and it is actually used in this sense once in the Bible by Abraham when addressing the three angels who visit his tent to announce the future birth of Isaac.

In all of its other biblical appearances, however, adonai means “God” or “Lord,” and Jewish tradition dictates that the Tetragrammaton, God’s unutterably sacred four-letter name that is spelled yud-heh-vav-heh by the Bible, is likewise to be read aloud as adonai. (Indeed, adonai is itself considered by observant Jews to be too sacred a word for ordinary speech, in which it is amended to adoshem or hashem and fully pronounced only when praying or reading from the Torah.) Although no one can be absolutely certain how the Tetragrammaton was actually pronounced in the time of the Bible, modern biblical scholarship has settled on “Yahweh” as its most probable form.

“Yahweh of the Armies” is thus as good a guess as any as to what adonai tsva’ot originally conveyed to its listeners. Some Bible translations have rendered tsva’ot as a proper noun, part of God’s name that should not be translated at all; hence, the Greek Septuagint’s kyrios sabaoth and Martin Luther’s Herr Zebaoth.

Generally, however, tsva’ot has been rendered as an ordinary noun that belongs to a divine epithet, like nephelegerèta Zeus, “Zeus the Cloud-Gatherer,” in Homer. This is the approach of the Latin Vulgate’s Dominus exercituum and of the King James’s “Lord of Hosts”—“host” being a now-archaic English word for “army” that is still sometimes used in its related sense of “multitude.” (We sometimes use “army” in this sense, too, as in a phrase like “an army of ants.”)

But if Yahweh was the name of the biblical God of Israel, who were His armies? To this, two different, though not entirely dissimilar, answers have been given, one by Jewish tradition and one by modern biblical scholarship.

In Jewish tradition, God’s armies are all the heavenly forces under His command, conceived of both as angels and as celestial bodies. Indeed, tsva ha-shamayim, “the army [or host] of heaven,” is a biblical phrase for the totality of these bodies, as in Deuteronomy 4:19, which enjoins the Israelites: “Beware lest thou lift up thine eyes unto heaven, and when thou seest the sun, and the moon, and the stars, even all the host of heaven, be driven to worship them and serve them.” In the book of Joshua, the heavens actually fight for the Israelites when God casts down “great stones from the sky” on the five Amorite kings at the battle of Gibeon and makes the sun and moon stand still in order to prolong a battle that is going in the Israelites’ favor.

It is also in the book of Joshua that we read of an angel who is a soldier in the heavenly host:

And it came to pass, when Joshua was by Jericho, that he lifted up his eyes and looked, and behold, there stood a man over against him with his sword drawn in his hand. And Joshua went and said unto him, “Art thou for us or for our foes?” And he said, “Nay, I come as an officer of the army of the Lord.”

Clearly, we are meant to understand that this was no “man” but rather a celestial being.

Rabbinic Judaism, which accepted the existence of angels, had no problem with such an interpretation. Thus, the medieval Bible commentator David Kimḥi, in commenting on the phrase elohey ha-tsva’ot, “the God of the armies,” in the book of Hosea, takes “armies” to refer to “the angels and the celestial orbs and the stars.” By “celestial orbs,” Kimḥi had in mind the heavenly spheres that, according to medieval astronomy, revolved around the earth and carried with them the sun, moon, planets, and fixed stars.

Some modern Bible scholars, by contrast, are of the opinion that the Israelite “Yahweh of the armies” was an inheritance from ancient Canaanite mythology, which spoke of a great, primeval war of the gods wherein the storm god Ba’al and his allies fought against an enemy camp and prevailed.

There are echoes of this mighty struggle in the Bible, too, as in Psalms 74:13-14, in which God is praised for having “smashed Yam by Thy strength”—yam being both the Hebrew word for ocean and the name of the Canaanite sea god who was allied with Ba’al’s enemies. In the words of the Bible scholar Patrick Miller in his Israelite Religion and Biblical Theology, “Epithets such as . . . yahweh saba’ot [reflect] the imagery so central to Israelite religion from the earliest times onward of Yahweh as a mighty warrior god, leader of the cosmic armies.”

Of course, since it is possible to see traces in the Bible of the process whereby the ancient gods of Canaan were subjugated by the God of Israel and turned into either angelic tutelaries or forces of nature, there is no real contradiction between the biblical scholars and the rabbis.

Nor did later Jewish tradition entirely forget the warlike “Lord of Hosts,” even if this aspect of His divinity was not emphasized by it. To this day, observant Ashkenazi Jews sing of it every Sabbath in the “Song of Glory,” attributed to the 12th-century pietist Yehuda he-Ḥasid, with which the Saturday morning service comes to an end. To quote several lines from it in the translation of Jonathan Sacks’s Koren Siddur, divided into strophes alternately recited by the prayer leader and the congregation:

Prayer Leader: They represented You in many visions;/
Through them all You are One without divisions.

Congregation: They saw You, now old, then young,/
Your head with gray, with black hair hung.

Congregation: Triumph like a helmet he wore on His head;/
His right hand and holy arm to victory have led.

God, the “Song of Glory” tells us, is greater than the sum of any images by which we might represent Him, one of which remains the image of the conquering general we call “the Lord of Hosts.”

Why Does the Hebrew Bible So Often Refer to God as "Lord of Hosts"?