As in the past, so today, anti-Semitism shows itself to be a virus almost infinitely protean. 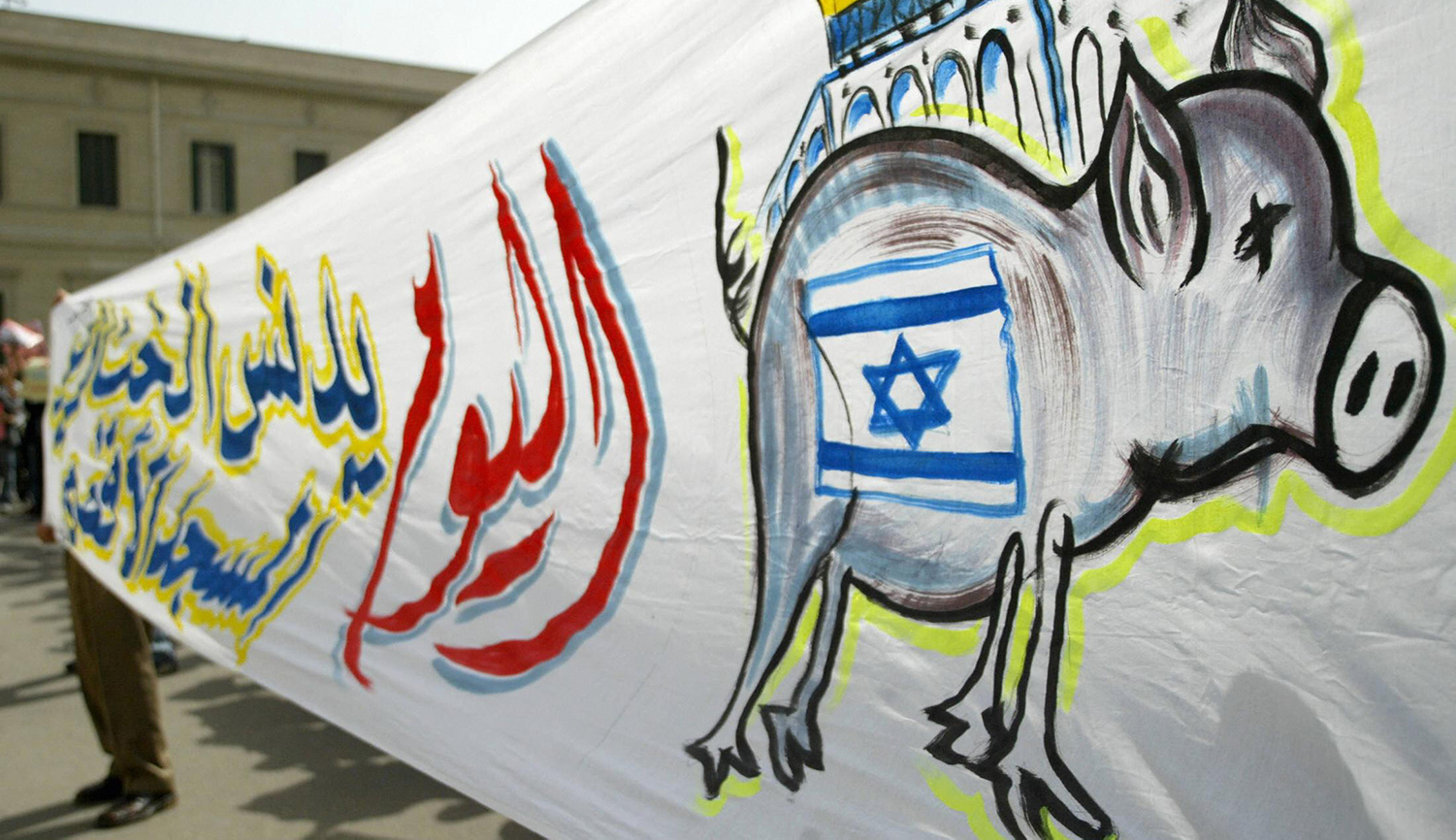 A huge Arabic banner reading “Today the Israeli pig will desecrate the al-Aqsa mosque” during a 2005 demonstration in Cairo. AFP/Getty Images.

Response
Joshua Muravchik
About the author

Walter Laqueur’s illuminating essay on the Protocols of the Elders of Zion reminds us that, while Jewish life has changed greatly in the last centuries, demonization of Jews remains a constant. Jews no longer live in compact and isolated communities as was typical during the post-exilic era, and in the democratic West the majority of their members have abandoned the regulations and rituals that once distinguished them from their neighbors. Many have even left behind their belief in the one God whose revelation at Sinai was the cardinal source and principle of their contribution to human history and development. And yet the Jewish people continues to be feared, envied, and despised.

As Laqueur suggests, the anti-Jewish animus is expressed in both new and old forms. The raw version put forth in the Protocols, much debunked elsewhere in the world, remains regnant in Arab lands where that text is widely sold, read, cited, and believed. That the Jews who had once been an integral element of Arab societies were expelled almost to the last one a couple of generations ago seems only to have increased the prevalent animus and paranoia.

The first target of these sentiments is of course the Jewish state of Israel—the bugaboo of the Arabs; but it is not the last. In Egypt, now 40 years at peace with Israel, anti-Semitism is ubiquitous in domestic politics, as has been brought to light by the indispensable Samuel Tadros. Thus, after being ousted from power by the military led by General Abdul Fattah al-Sisi, the Muslim Brotherhood bruited about the story that Sisi is himself a Jew, allegedly born of a Maghrebian Jewess. In turn, Sisi’s backers countered not by damning the Brotherhood for its absurd allegation but by promoting the counter-accusation that the Brotherhood itself was created by a Jewish conspiracy to undermine Egypt.

If Arabs tend to be dangerously loopy on the subject of Jews, the West presents a more nuanced picture. In France, for example, surveys show lower levels of traditional anti-Semitic attitudes than ever before—even as violence against Jews has intensified to the point of raising dire questions about whether they can continue to live safely in France. Clearly a bifurcation exists between, on the one hand, ethnic French whose public remorse over having once delivered their Jewish neighbors to extermination is confessed in plaques on school buildings all over Paris and, on the other hand, more recent arrivals from the Muslim world, many of whom seem to regret that any Jews survived at all.

In the United States, by contrast, Jews live in an atmosphere of acceptance and security. Indeed, according to a Pew survey of attitudes toward different religious groups, Jews are the most popular of all, liked better than either Protestants or Catholics or indeed the members of any other faith. What accounts for this finding, surely unprecedented in the entire history of the diaspora? Pew attributes it to the overwhelmingly warm pro-Jewish feelings of evangelical Christians—sentiments that, as Pew notes dryly, are “not reciprocated” by their Jewish objects.

Clearly, American evangelicals’ strong affinity for American Jews is linked in large measure with their great love of Israel—just as, from the other side, French Muslims’ assaults on Jews are linked with or flow from their hatred of Israel. These dynamics illustrate how hard it is to distinguish attitudes toward the Jewish state from attitudes toward Jews.

Of course, there are American haters of Israel who deny they are anti-Semites, but these protestations ring hollow. What would we make of the claim that someone hates, say, Poland or Hungary or France but has nothing against the Poles or Hungarians or French? Moreover, those making this claim about Israel almost invariably judge it by standards they apply to no other state and/or charge Israel’s supporters with conspiring against the national interests of the United States—all the while complaining, in Laqueur’s paraphrase, about how their own allegedly tempered “criticism of Israel is unfairly stigmatized as anti-Semitism.”

In reality, criticism of this or that Israeli policy is the daily fare of Israel’s media and the Knesset, and is amply to be found in the discourse of pro-Israel observers around the world. But “criticism” that holds Israel to a unique standard or that anathematizes Israel’s foreign supporters is a different matter. The claim by its purveyors that all criticism of Israel has been proscribed is nothing more than chaff thrown up by genuine anti-Semites to obscure their motives.

Nor does hostility to Israel, extending even to outrageous attacks on Jews, come exclusively from non-Jews. Pew finds that 85 percent of both American evangelicals and American Jews express support for Israel. But in the case of evangelicals that figure represents a climb, while for Jews it represents a decline. These contrasting trajectories reflect another dynamic of contemporary antipathy to Israel—namely, that its center is no longer on the right, where most evangelicals make their home, but on the left, where most Jews do.

Fifty years ago, in the aftermath of the Six-Day War, it was quipped that Israel had become the religion of American Jews. This captured the reality that many who no longer practiced Judaism found in the Jewish state a sense of shared identity. But there has long been another group of Jews who have substituted leftism of one kind or another for the faith of their forebears. This group was personified in 2016 by Bernie Sanders who, of some two-dozen candidates seeking the presidential nomination by either major party, was by far the most critical of Israel and also the only Jew.

Today the American left is animated largely by identity politics, a cult that has given rise to the philosophy, known as intersectionalism, that concatenates the causes of all groups claiming victimhood. Logically, Jews, who continue to suffer their share of prejudice and abuse, and the state of Israel, not only threatened constantly by terrorism but marked openly for obliteration by its sworn enemies, might claim a place on this roster. But because the left has long since ceased supporting Israel, campus coalitions of protest embrace the cause of the Palestinians and more or less explicitly endorse the abolition of the Jewish state.

Anti-Semitism has been of no interest to these intersectional groupings—except when it can be connected with the radical right or with President Trump’s “populism.” When it comes to policing anti-Semitism in its own ranks, however, the left has done little. Jesse Jackson, who notoriously referred to New York City as “Hymietown,” went on to win seven million votes and to carry eleven states in quest of the Democratic presidential nomination. It is hard to imagine a similar showing in either party for a candidate who slurred blacks or Hispanics in equivalently loaded terms. Among the several prominent Democrats who endorsed Jackson was Bernie Sanders, the then-mayor of Burlington, Vermont.

As antipathy to Israel has become a cause of the left, left-wing Jews have come to play a visible and substantial role in anti-Israel agitation even of the most extreme kind, like that practiced by the so-called Jewish Voice for Peace, which in effect denies Israel’s right to exist. Unsurprisingly, sentiments of this sort spill over into the overt brand of anti-Semitism exemplified by Gilad Atzmon, the Israeli ex-pat, cited by Laqueur, who describes himself as a “self-hating Jew” and who says of the Holocaust that we must ask “why were the Jews hated?”—as if it were somehow their fault.

Another of this ilk is Richard Falk, formerly of Princeton University and the UN Human Rights Council, who posted on his blog a cartoon of Israel in the form of a dog wearing a skullcap while chomping on Palestinian bones and who, in blurbing Atzmon’s book, The Wandering Who?, called it a “transformative story told with unflinching integrity” and expressed the hope it would be “not only read but reflect[ed] upon and discuss[ed] widely.”

Just as the tsarist regime of Russia played a critical role in promoting the Protocols, only to have its bloodiest enemies, the Bolsheviks, eventually appropriate—and intensify—its predecessor’s anti-Jewish proclivities, so today, once again, anti-Semitism shows itself to be a virus almost infinitely protean. For reminding us of a central chapter in the modern etiology of this lethal disease, one whose symptoms stubbornly resist every exposure to sun and air and even the inoculative effect of the Holocaust, we are all in Walter Laqueur’s debt.

More about: Anti-Semitism, History & Ideas, Protocols of the Elders of Zion

The Many Lives of "The Protocols of the Elders of Zion"
2. Response

How the "Protocols" Emboldened a Notorious Far-Right Russian Party