Israel's Supreme Court Is Unusual, but Not That Unusual

The Jewish state is unique both in the strength of its democracy and in the self-assurance of the judges who challenge its democracy. It may be fated to remain so. 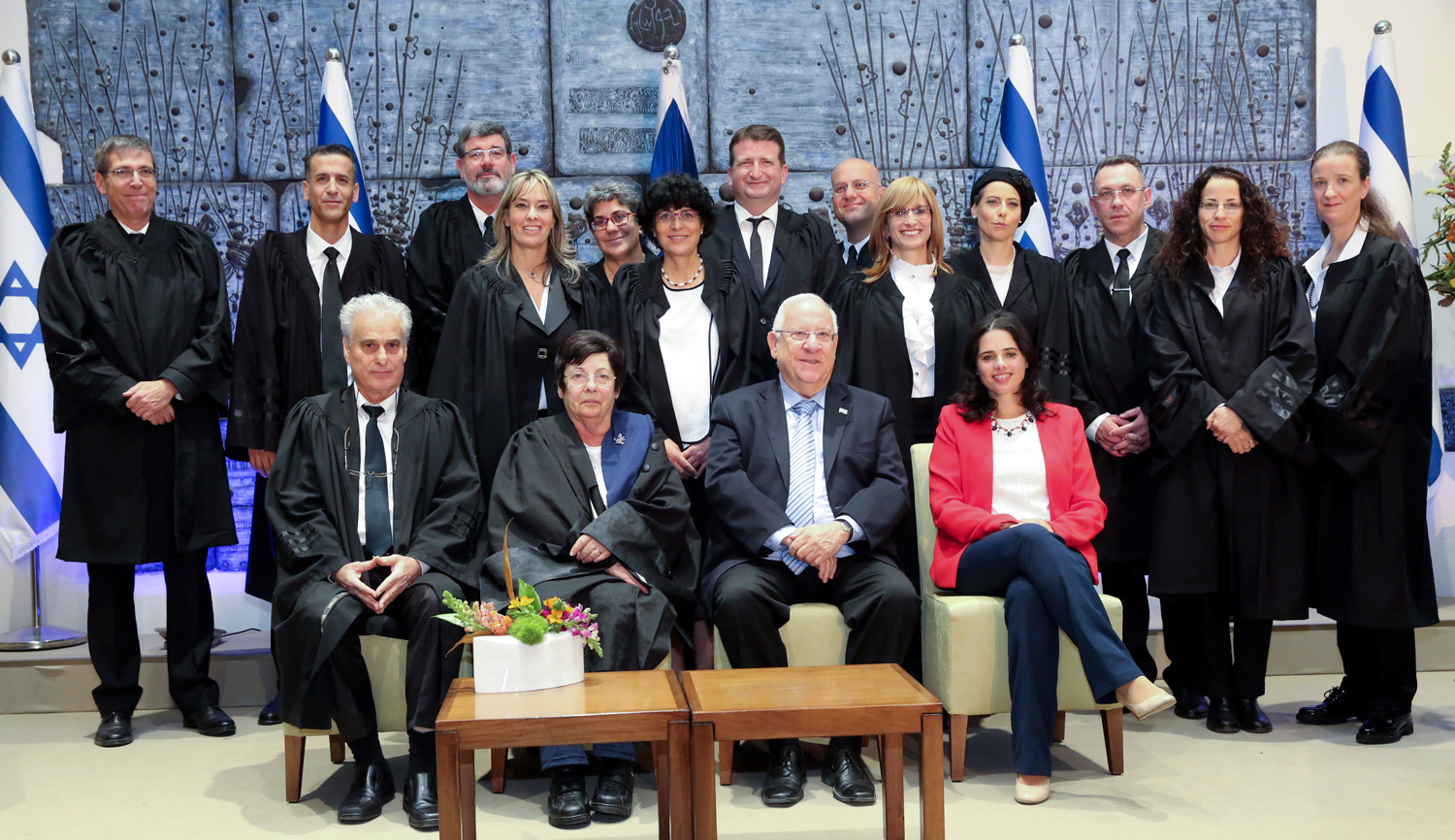 A swearing-in ceremony for newly appointed judges at the Israeli president’s residence in Jerusalem on December 8, 2016. Yossi Zamir/Flash90.

Evelyn Gordon begins her essay, “Disorder in the Court,” by juxtaposing a contentious agreement between America and Iran with a contentious agreement between Israel and three private companies; the latter agreement involved Israel’s offshore natural-gas deposits. The comparison is meant to illustrate the unique ambitions of Israel’s supreme court. Informed American readers, however, will not find it all that surprising that courts can delay major development projects. Environmental litigation has that effect all the time in the United States.

A better example to illustrate Gordon’s point—an example she mentions only in passing later in her article—is the Israeli supreme court’s intervention in military decisions. In recent years, for example, the court has repeatedly entertained challenges to planned military actions in Gaza even after having itself acknowledged that Israel’s battle with Hamas should be regarded as an international armed conflict: in other words, war with a foreign state. A few years ago, I attended a conference in Israel that included a number of U.S. military lawyers and their IDF counterparts. The Americans were astounded at the range of issues, regarding such matters as permissible targets for air strikes, that Israel’s supreme court had ventured to adjudicate. No other court in the world has attempted anything of the sort in the midst of war.

All of this judicial supervision operates, as Gordon notes, without a formal constitution and often with little or no clear statutory grounding or other legal warrant. Has any court in modern times gone so far? In a 2007 review, Richard Posner—one of our most self-confident, adventurous, and “pragmatic” federal judges—noted that Aharon Barak, when serving as the Israeli court’s president, had “created out of whole cloth . . . a degree of judicial power undreamed of even by our most aggressive [U.S.] Supreme Court justices.”

While I don’t dispute the main point of Gordon’s (or Posner’s) challenge, there are a number of reasons why such criticism should be tempered. To start with, remarkable exertions of judicial authority are hardly unique to Israel. In 2015 the U.S. Supreme Court ruled that the Western understanding of marriage as a union of one man and one woman had, after thousands of years, now become an arbitrary formula—and the Court was prepared to embrace that conclusion with only five justices in agreement. Israel’s supreme court, for all its ambitions, has not redefined the meaning of marriage. Courts in Canada and South Africa, however, had preceded the daring of the U.S. Supreme Court.

Examples can easily be multiplied. So prevalent has judicial activism become in so many Western democracies that a 2007 study invented a term—“juristocracy”—to describe the phenomenon. The book’s author, the Israeli political scientist Ran Hirschl, was able to show that the trend in Israel had much in common with trends in Europe and North America.

True, courts in other countries may operate with a somewhat stronger legal grounding than the Israeli supreme court can invoke. In the United States, as in many other countries, the national constitution declares that it is supreme law. But courts that don’t have such a law have not always let that hold them back. Starting in the 1960s, the European Court of Justice (ECJ) developed an elaborate jurisprudence asserting the supremacy of “European law” over national law—without any clear grounds for such a claim in the EU’s original common-market treaty. As far back as the 1970s, the ECJ invoked this supremacy principle to uphold bureaucratic regulations against a contrary decision of the German constitutional court regarding fundamental guarantees of individual rights.

Even in America, the Supreme Court doesn’t just enforce the precise words of the Constitution. Where the Constitution guarantees that no one shall be “deprive[d] of liberty . . . without due process of law,” the Court has taken those words as sufficient basis for an elaborate jurisprudence guaranteeing access to abortion and denying states and localities the authority to accommodate religious practice or to assist religious institutions in some ways but not others. Gordon wants courts to guard “legality” without meddling in “policy,” but it’s not only in Israel that courts seem to confuse these categories.

What remains unusual—and objectionable—is the Israeli arrangement for choosing supreme-court justices. As Gordon notes, sitting supreme-court justices are included in the committee that chooses the new justices, thus helping a very activist court to insulate itself from political correction. Still, we should not draw comparisons in abstraction from other differences. Israel requires justices to retire at age seventy, thus ensuring a frequent turnover. If that rule applied in the U.S., President Obama would have been able to fill six vacancies instead of two (or three, if we count the Scalia vacancy).

And if the concern is that the Israeli appointment scheme is undemocratic, we might remember that there are lots of democratic deficits in the U.S. system. The Constitution gives two senators to Wyoming and the same number to California, a state with about 80 times as many people. But what should be done about this inequity? Let California have 100 senators? Make Wyoming share senators with a dozen other states? Would-be reformers have always been thwarted by the difficulty of finding alternative arrangements that can command broad support.

Analogous problems would bedevil efforts to reform the selection scheme for the Israeli supreme court. In a parliamentary system, the majority in parliament is obligated to support the government or risk forcing a political crisis, perhaps leading to new elections. So letting the prime minister nominate judicial candidates, subject to parliamentary approval, would normally leave a completely free hand to the prime minister, perhaps yielding overly partisan appointments. But requiring that the prime minister’s choice gain approval from a supermajority in the Knesset might make the choice turn, in practice, on seedy bargains with fringe parties—not an unfamiliar pattern in Israeli politics and one unlikely to achieve better results in this area.

The best alternative may be what is happening now: moral pressure from a confident justice minister, Ayelet Shaked, summoning public pressure for judicial restraint and the appointment of more cautious justices.

I’ll conclude with two further points that may similarly serve to mitigate the harshness of Evelyn Gordon’s protest. One has to do with international opinion. Allowing an independent judiciary to enforce limits on the government proves Israel’s commitment to Western legal standards. Decisions of its supreme court are cited admiringly by commentators in Europe and America who find themselves wrestling with similar issues of international law, human-rights law, and the law of armed conflict. Of course, hostile demagogues dismiss the court’s work as another Zionist trick. But at the margin, Israel’s confidently independent court seems to earn it some respect and trust, even from foreign critics who find fault with particular Israeli policies.

Then there’s the internal aspect. Gordon emphasizes that the court shows too little respect either for Israeli democracy or for the legitimate claims of Israel’s Jewish character. But for much the past four decades, Israel has been dominated by governments of the right, often in coalition with Jewish religious parties. Even though the supreme court has regularly provoked controversy, no government has made a serious effort to constrain its authority. Israelis of many different political views seem to accept that democracy should be checked by law. Perhaps they are unduly credulous, but the basic impulse is not surprising. After all, it was not devotion to “democracy” that kept Jews together for so many centuries in the Diaspora; it was devotion to law.

I sympathize with Israeli friends who complain about the overreaching of their supreme court. If its judges are not uniquely activist, maybe they are or have been a bit more arrogant than judges in other democracies. But Israelis have learned to cope with any number of challenges and frustrations that don’t get resolved. In many other areas, as perhaps in this one, the most obvious alternatives are simply unacceptable.

Israel is unique both in the strength of its democracy and in the self-assurance of the judges who counter and challenge its democracy. Given Israel’s location, given Israel’s history and traditions, it may be fated to remain a special case in this respect as in so many others.

Israel's Supreme Court Is Unusual, but Not That Unusual
1. Essay

Disorder in the Court
2. Response

The Problem Starts in the Knesset
4. Last Word